More cyclists are being killed by cars. Advocates say U.S. streets are the problem 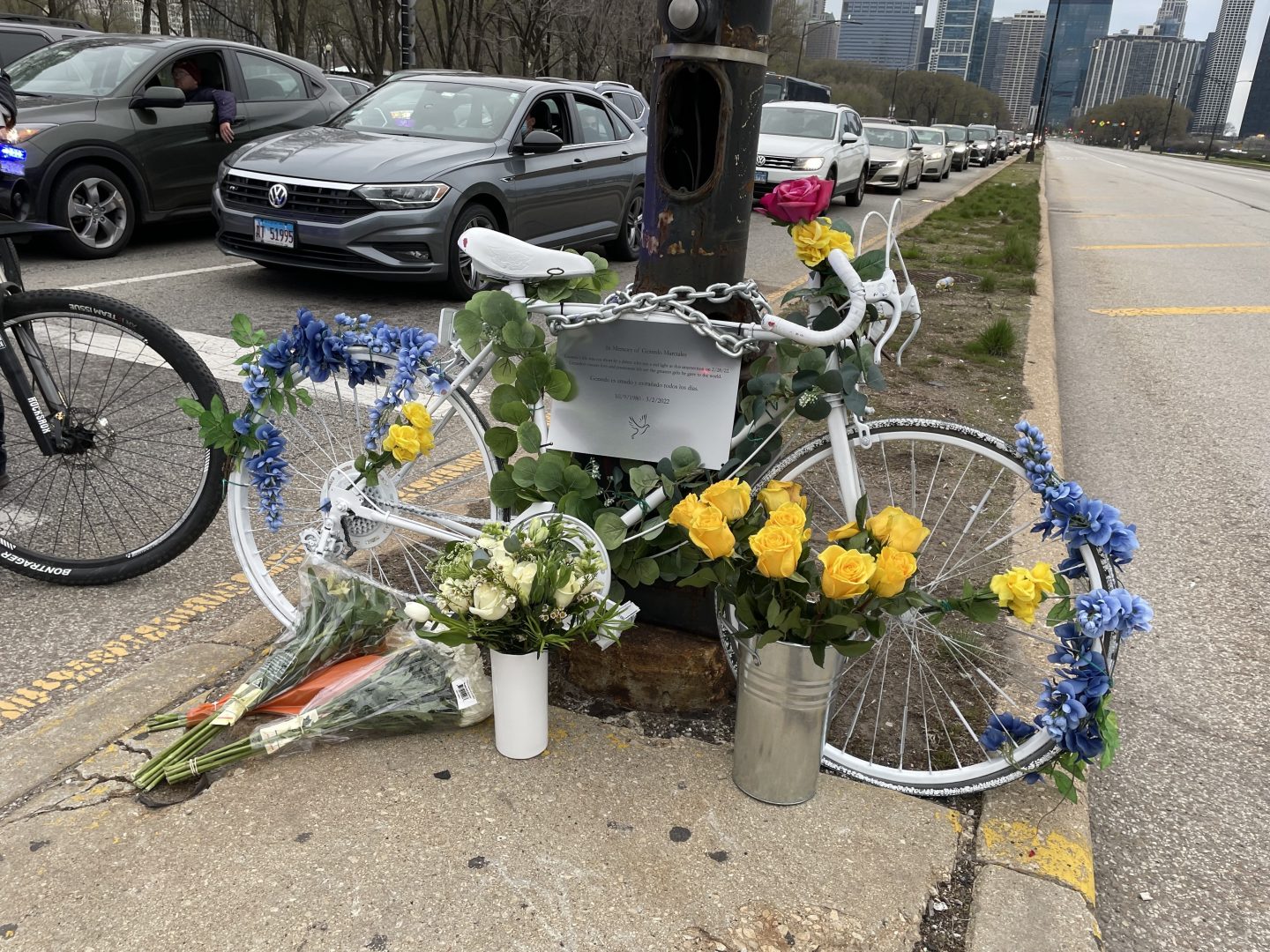 One good thing that happened during the pandemic is that people got out their old bikes or bought new ones and started riding them.

And across the country, cities are trying to accommodate this boom in cycling by developing more bike lanes and trails.

But amid a sharp increase in fatalities and serious injuries among cyclists hit by cars and trucks, some cycling advocates say there’s often a disconnect between efforts to encourage more biking and ensuring the safety of bicyclists who are using streets that are primarily designed to move cars and trucks through city neighborhoods and urban centers quickly.

Our roads have not always been built to prioritize cars, because the first vehicles to use the nation’s streets weren’t automobiles; they were carriages and bikes. In fact, the League of American Bicyclists has been around since 1880, long before cars.

“We lobbied Congress at the end of that century to get the first paved roads in the United States,” says Bill Nesper, the League’s executive director, who adds that it wasn’t until after World War II that our streets became so car centric.

“And it continues to this day, a prioritization of moving vehicles as quickly as possible through places,” Nesper says. “And it’s absolutely true that people moving and getting around by foot and by bike is an afterthought, you know, if thought about at all.”

But many cities, including Chicago, are now trying to change that. 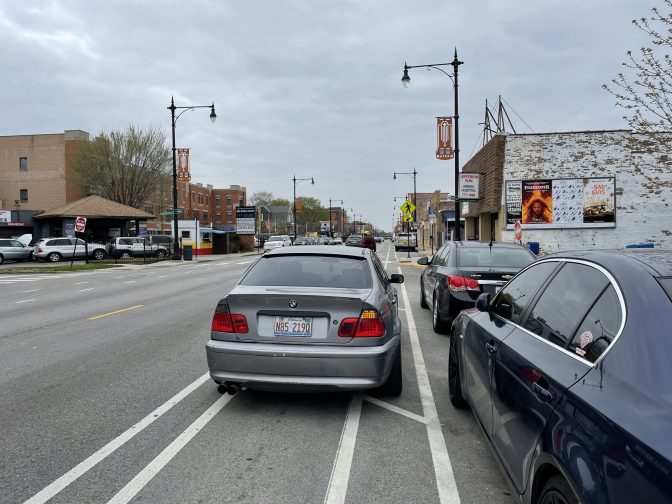 The paint marking the lane is faded and in some places non-existent and speeding cars, as you can see here, often drift into the bike lane. The city of Chicago recently installed new stop signs in the area to slow cars down, and may put plastic bollards between the car and bike lanes.

“We’ve all had our own close calls”

Earlier this spring, Chicago Mayor Lori Lightfoot and Transportation Commissioner Gia Biagi announced a new a new $15 million plan to develop and connect 48 new miles of bike trails and corridors, vowing “to build out the most connected system of trails and corridors anywhere in the country,” as Biagi said in a recent speech to the City Club of Chicago.

That’s in addition to 125 miles of new bike lanes on city streets, with a goal of having a total of 500 miles of bikeways citywide in the next two to three years.

“We have never built bike infrastructure this quickly in our city’s history,” Biagi said. And to encourage more Chicagoans to get out and ride, Biagi said “we’re going to give away 5,000 bikes to Chicago residents. Free bikes! And a helmet and a bike lock!”

The line drew applause at the civic group’s luncheon but many of those who ride bikes in Chicago are not clapping. In fact, they’ve been in a somber mood more often than not lately, because in recent weeks, three cyclists have been hit and killed by cars in incidents cycling advocates say could have been prevented with safer infrastructure and road design.

“I hate putting these on. I hate everything about this,” says Christina Whitehouse, founder of the group “Bike Lane Uprising,” at a recent memorial event for Gerardo Marciales. She and dozens of other cyclists joined the 41-year old’s fiancée and family in placing a ghost bike, a bike spray painted white, at the intersection where he was killed by a driver who used a turn lane to bypass traffic stopped at red light.

“The reason so many people are here is because we’ve all had our own close calls,” Whitehouse told the crowd, with many nodding in agreement. 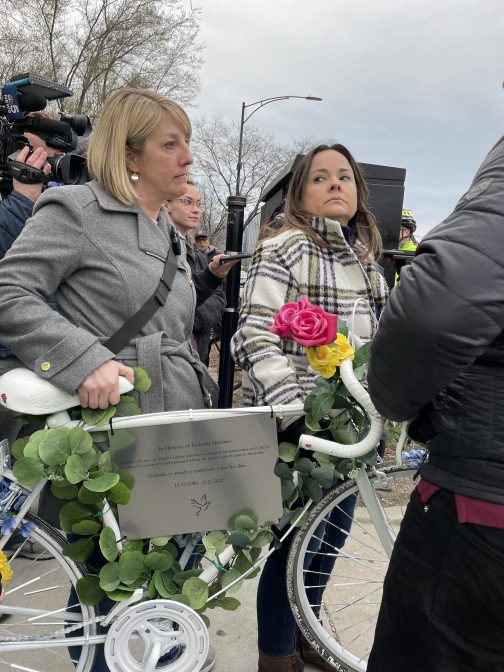 Whitehouse says she was painting Gerardo’s ghost bike the night before, when she got word that another cyclist was killed across town.

“I can’t keep up with this. We’ve been buying materials for ghost bikes in bulk,” Whitehouse says. “We now have to restock.”

Since the pandemic began, the number of bicyclists hit by vehicles has been rising at an alarming rate; pedestrians, too, for that matter. And Whitehouse and others say the problem isn’t just drivers speeding and breaking traffic laws, but also road and intersection design and how infrastructure is built and maintained can put cyclists at risk.

At the site of the second fatal collision, a driver on a two-lane street swerved across the center line and slammed head on into the cyclist riding in the other direction.

Amy Rynell of Chicago’s Active Transportation Alliance says that street used to have a concrete planter in the median but the city removed it.

“Had that had been in place, that cyclist would still be alive today,” Rynell says. “So removing that infrastructure under the auspices of speeding cars up made that street much more dangerous for pedestrians and cyclists.”

Like many cities, Chicago has been adding bike lanes to its street grid, painting white stripes 4 to 6 feet apart feet on certain thoroughfares, giving cyclists their own lane.

But Rynell says drivers often don’t respect them. She’s speaking from a spot on Chicago’s busiest cycling street, Milwaukee Avenue, where two cyclists have been killed while riding in the bike lane, one of them earlier this month.

Rynell says she rode in that bike lane to get there.

“Every minute I encountered a car parked in the lane, which meant it’s not a safe bike lane for me to ride in, because the only way for me to go forward is to go into traffic,” Rynell says.

“Paint is not protection,” Whitehouse added. “It’s not gonna prevent anyone from running me over.”

Bike Lane Uprising documents bike lane violations on its website and maps problem areas around the city. Volunteer members upload photos and videos of cars and trucks stopping, parking and driving in bike lanes, as they’re often used by cars queuing up for car washes, e-commerce and food delivery vehicles, Uber and Lyft drivers picking up and dropping off riders, and even city Department of Transportation (DOT) and police vehicles. Violations are rarely, if ever, enforced. 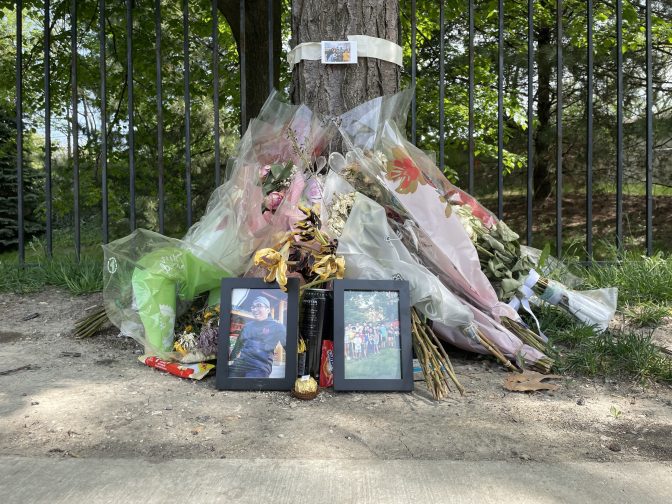 The roadside memorial to Nick Parlingayan, 22, who was struck and killed by a Car while riding in a bike lane in Chicago.

Across the country, the number of cyclists that are seriously injured or killed is soaring. According to the National Safety Council, 1,260 bicyclists were killed in 2020, up 16% from the year before and an increase of 44% over the past decade.

“While there’s been a lot of infrastructure that has been put in the past 20 years, like bike lanes, and protected bike lanes, more connected off-street trails, there still aren’t safe places to ride in most communities, where people feel safe,” says Bill Nesper of the League of American Bicyclists.

“We believe that (for) all of our streets, there is an engineering solution to this,” Nesper adds.

At a minimum, experts suggest painting bike lanes green so they stand out more, and providing more separation by adding plastic bollards between car and bike lanes, although those bollards are easily run over by cars and trucks with little damage to the vehicle. In Chicago and other northern cities, snow plows often knock them down in the winter months.

Advocates say concrete curbs or barriers can better separate and protect bike lanes from speeding car and trucks, even if that means eliminating a lane for traffic or on-street parking.

Our hope is that infrastructure will be built BEFORE people die. Gerardo lost his life due to safety hazards known since 2018 – bollards were added today. We have conflicting feelings about these flex posts. It’s an improvement but folks are still running the light at full speed. pic.twitter.com/moAsEc18Yy

Chicago and many other cities have been making such infrastructure upgrades. In fact, the city of Chicago has already made traffic design changes and added safety features at two of the locations where cyclists this year have been hit and killed by cars and plans are underway to redesign the streetscape at the the third location

And with billions in infrastructure cash flowing from Washington, D.C., cycling advocates say there’s an opportunity to do much more.

Earlier this month, the Biden administration opened grant applications for funding made available under the new “Safe Streets and Roads for All” program Bipartisan Infrastructure Law that the president signed into law last November. The program will allocate $6 billion over five years to reducing roadway crashes and fatalities, by helping cities and states identify the most dangerous corridors and intersections and will prioritize safety improvement projects that will protect pedestrians and cyclists in addition to motor vehicle drivers.

Improving urban transportation safety for all users starts with putting cyclists, pedestrians and those using scooters, e-bikes and other alternative mobility modes on a level playing field with car and truck drivers, says P.S. Sriraj, director of the Urban Transportation Center at the University of Illinois – Chicago.

“There is this lack of awareness about sharing the road between different modes, between motorists and bicyclists,” he says.

“The U.S. has this perception about modes other than automobiles being inferior and that needs to be addressed right from the get go,” Sriraj adds.

The way forward to creating safer transportation spaces, Sriraj says, must include what he calls “the three E’s” – Education, Engineering and Enforcement.

But he adds that urban planners have to walk a delicate line in balancing the need to build safe bicycling infrastructure at a time road congestion is getting worse, because cars and trucks are not going away any time soon.

“It’s easy to say you need to create car-free zones, draconian policies (that limit or eliminate driving),” Sriraj says. (But) those are never going to happen. Not in this country.”

“We just have to figure out a way out of the situation based on some common sensical goals.”

From Columbine to Robb, 169 dead in US mass school shootings