Russian T-72 tanks roll during a rehearsal for the Victory Day military parade which will take place at Dvortsovaya (Palace) Square on May 9 to celebrate 77 years after the victory in World War II in St. Petersburg, Russia, Thursday, May 5, 2022. (AP Photo/Dmitri Lovetsky) 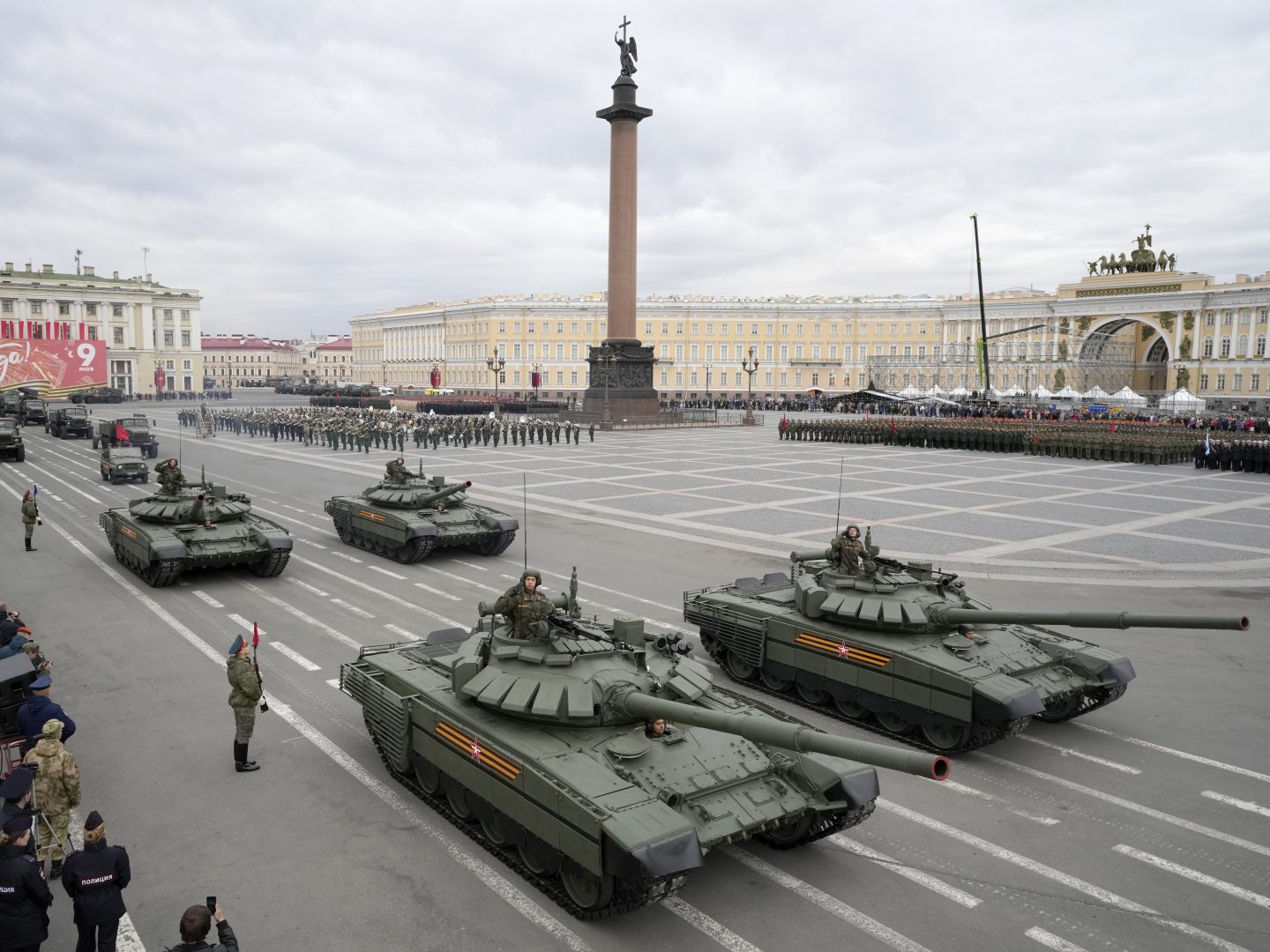 Russian T-72 tanks roll during a rehearsal for the Victory Day military parade which will take place at Dvortsovaya (Palace) Square on May 9 to celebrate 77 years after the victory in World War II in St. Petersburg, Russia, Thursday, May 5, 2022. (AP Photo/Dmitri Lovetsky)

(Moscow) — Russians will celebrate Victory Day on Monday, an annual event to mark the Soviet Union’s defeat of Nazi Germany in World War II that has taken on added intrigue and import this year because of Russia’s fight in Ukraine.

Under Russian President Vladimir Putin, the May 9 event has grown in scale and political prominence, with a Soviet-style military parade on Moscow’s Red Square featuring a presidential address.

This year’s Victory Day comes amid widespread speculation, in both Russia and the West, that Putin is eager to declare at least a symbolic win in Ukraine. One big question is whether — or how — Putin might try to galvanize Russians and fuse past Soviet glory and sacrifice with a new call to battle against what he claims is a “neo-Nazi” regime in Ukraine.

The Kremlin insists that what it calls its “special military operation” in Ukraine is going “according to plan.” Two months in, Western security officials say Moscow has struggled to reach its objectives. With few outright victories to point to, some Russians fear Putin may instead seize the occasion to announce national mobilization and formally declare war, against not only Ukraine but perhaps also other countries in the West.

Russia has made a dash to take Mariupol

Clues to the Kremlin’s search for the optics of victory may lie in a visit last week by a senior official, Sergei Kiriyenko, to the besieged Ukrainian city of Mariupol. A pocket of Ukrainian resistance remains inside the local steel plant, but Putin has formally announced Russian control of Mariupol, unleashing a flood of Russian state media into the city.

Russian navy cadets take part in a rehearsal for the Victory Day military parade in Sevastopol, Crimea, on May 5. The parade will take place there on May 9 to celebrate the Soviet Union’s defeat of Nazi Germany in World War II.

In front of cameras, Kiriyenko, Putin’s deputy chief of staff, unveiled a statue depicting an elderly Ukrainian woman whom Russian state media have turned into a symbol of Ukrainian support for Russian troops. The woman, dubbed Babushka Anya, was apparently filmed by Ukrainian soldiers as she greeted them with a Soviet banner, mistakenly believing they were Russians. In the video, she refuses food that the troops offer her after she realizes they are Ukrainian.

She is “a living symbol of the continuity of generations and of the ongoing fight against Nazism and fascism,” Kiriyenko announced, echoing Putin’s claims that Russian troops are in Ukraine to “denazify” the country. “She’s become the grandmother to all of the Donbas and a grandmother to all of Russia.”

Kiriyenko’s presence in Mariupol came amid Russian news reports that the Kremlin adviser — who normally oversees domestic politics — has been tasked with politically integrating Ukrainian lands as they fall to Russian forces.

Putin recognized the independence of Ukraine’s separatist regions of Donetsk and Luhansk in the hours before Russia’s decision to send troops into Ukraine in February. At the time, Putin justified the move as a humanitarian mission in defense of Russian-speakers in the area. Western intelligence services say the Kremlin may now seek the territories’ annexation as a possible prize.

People walk through a tunnel of stars set up as decoration for Russia’s Victory Day in central Moscow on Thursday. Russia will hold an annual military parade at Red Square on May 9.

The Kremlin has warned of the potential for wider conflict

Russia’s recent focus on those Ukrainian regions in the eastern Donbas area has slowed down as the U.S. and European allies boost the flow of weapons and other support for Ukraine.

Russia’s military has targeted those shipments as the Kremlin has escalated warnings and criticism, arguing that the military aid risks military confrontation between Russia and NATO powers.

Underscoring this message, Russia on Wednesday carried out drills simulating a tactical nuclear strike in its western exclave of Kaliningrad, which borders the European Union.

Putin has previously warned of “lightning fast” retaliation if the West intervenes in the Ukraine conflict directly — the latest in a pattern of amplified rhetoric that has fed theories that Putin is seeking to build public consensus for a broader war. Asked whether Putin would formally declare war on Ukraine on May 9, a Kremlin spokesman called the idea “nonsense.”

Parade preparations are underway in Moscow

In recent days, Russia’s armed forces have been rehearsing for a parade on Red Square in what has become a Putin-era revival of Soviet military traditions.

Each May 9, Russians celebrate the end, in 1945, of what they call the Great Patriotic War, in which more than 20 million Soviet citizens died at home and abroad. Celebrations and parades take place in dozens of Russian cities.

It appears Moscow’s military display on Monday may be scaled down from those in previous years to reflect the fight in Ukraine, based on statements from Russian Defense Minister Sergei Shoigu. Still, Shoigu said the parade would include 11,000 soldiers and show off 77 aircraft and 131 vehicles, including Russia’s newest rocket launchers.

Russia’s air force has promised to carry out celebratory runs in Z formations — the letter used to mark the Russian military in Ukraine. The letter Z has also emerged as a controversial symbol of both support for Russian troops and intimidation of dissenting voices at home.

A Soviet-era aircraft known as the Flying Kremlin will also make an appearance. It’s an airborne presidential command center to be used in the event of a nuclear attack on Russia.

Meanwhile, down below, there will be Putin and his speech — with the president’s staunchest supporters certain their leader will find the right words.

“Victory will come, but not until we’ve defeated all the Nazis in Ukraine,” said Andrei, 60, a tour guide on Red Square who was worried to give his full name to a Western journalist.

“Putin’s a clever man,” he added, as fighter jets flew in parade formation overhead. “He won’t declare anything without a real victory.”