FILE—Southeastern Pennsylvania Transportation Authority (SEPTA) trains sit in the yard at Fern Rock Transportation Center in Philadelphia, in this file photo from Oct. 25, 2021. Members of Philadelphia's largest transit worker's union announced early Friday, Oct. 29, 2021 they reached a tentative contract agreement. The agreement has averted a possible strike that threatened to bring elevated trains, buses and trolleys to a halt and leave thousands of children and educators without a way to get to school next week. (AP Photo/Matt Rourke, File)

With the help of Amtrak, the new authority will handle the restoration of passenger train service connecting Reading, Phoenixville, Pottstown, and Philadelphia. 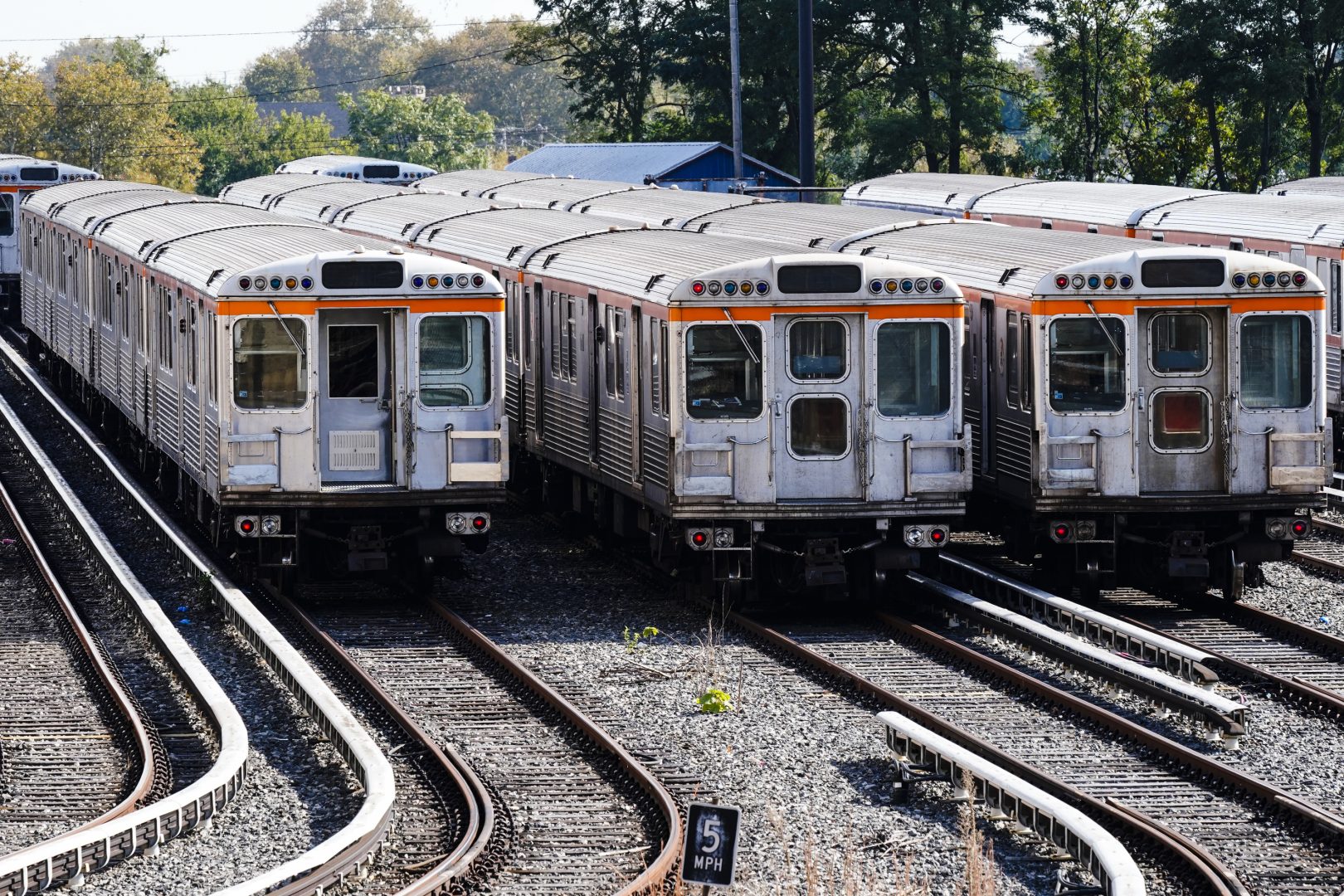 FILE—Southeastern Pennsylvania Transportation Authority (SEPTA) trains sit in the yard at Fern Rock Transportation Center in Philadelphia, in this file photo from Oct. 25, 2021. Members of Philadelphia's largest transit worker's union announced early Friday, Oct. 29, 2021 they reached a tentative contract agreement. The agreement has averted a possible strike that threatened to bring elevated trains, buses and trolleys to a halt and leave thousands of children and educators without a way to get to school next week. (AP Photo/Matt Rourke, File)

It’s been about four decades since the historic Reading Railroad was active in connecting Philadelphia with each of its northernmost suburbs — now, its spiritual successor’s long-shot plan at a comeback is one step closer to coming to fruition.

The Chester County Board of Commissioners unanimously voted on Wednesday to join forces with their counterparts in Montgomery County and Berks County in creating the Schuylkill River Passenger Rail Authority (SRPRA).

With the help of Amtrak, the new authority will handle the restoration of passenger train service connecting Reading, Phoenixville, Pottstown, and Philadelphia.

“In this polarized world right now, I think it’s great that not only three counties work together, which is very rare, but that it is a nonpartisan issue — Christian Leinbach is a Republican, and Ken [Lawrence] and I are Democrats, but we were working hard to get this done,” Moskowitz said.

Moskowitz is very excited about the prospect of rail service returning to the northern end of Chesco. For the last year, a tri-county committee has been working to discuss the viability of the project with Amtrak and SEPTA about how to restore service.

“At the end of the day, SEPTA is on an extremely tight budget and couldn’t do anything, but Amtrak came to the table with their funding from the infrastructure [bill]… So as it stands, now, Amtrak is going to be our carrier. And they will run a couple trips a day to start and hopefully, we’ll get up to 10 to 12 a day. Now, however, that’s not going to start tomorrow,” Moskowitz said.

She emphasized that a lot of work still needs to be done before people can even begin to imagine the sounds of the passenger trains echoing outside of their homes again.

But, Moskowitz is hopeful now that a plan is finally in motion to restore train service to areas “desperately” in need of connections. While movement at the county level is finally in full effect, Moskowitz emphasized that this has been a community-driven mission years in the making.

Phoenixville Mayor Peter Urscheler is another inaugural member of the authority. He’s been a strong supporter of the project for quite some time.

“In 2018, we started a really great grassroots group here within the Borough of Phoenixville, so we called it the Mayor’s Task Force on Rail Restoration. The other interesting thing is there were groups in Berks County and also in Montgomery County, who were also evaluating the restoration of rail service on this line. And so, fast forward to where we are today, those groups have really come together to work in conjunction with our county commissioners,” Urscheler said.

Just like Moskowitz, the mayor also gave credit to their predecessors before the 2018 group formed that pushed for the rail service to return over the last few decades.

Trains haven’t stopped in Phoenixville since 1981 when SEPTA took the reins of the Regional Rail lines ending a game of bankruptcy hot potato started by previous companies.

Because the line wasn’t electrified, SEPTA cut services due to high costs — meaning regional rail service beyond Norristown came to an end.

The creation of an authority is a major piece of the puzzle in reviving the remnants of the Reading Railroad.

“You really need a centralized entity for Amtrak or SEPTA to work with and so the creation of the Schuylkill River Passenger Rail Authority, really is that first formal step in restoring rail service to these communities. And so this gives a legal entity for operators like Amtrak and SEPTA to actually work with,” Urscheler said.

Now, SRPRA can request funding for the studies that need to be done, the development of stations and, if needed, the purchase of the components to restore the line.

The county predicts that the project could generate more than $1 billion in development along the line. Urscheler sees a ton of benefits stemming from rail services returning to the region.

“First of all, it has a great economic benefit where we have the ability for people within the Borough of Phoenixville to reach these other employment hubs,” he said.

He added that the tourism opportunities are also boundless.

“But overall, just from an environmental perspective and the ability to reduce congestion on roads like [US] 422 and the Schuylkill Expressway, this is kind of a win-win for us, because Phoenixville is extremely dedicated to our environmental impact. And so, when we are able to provide public transportation and encourage more people to access public transportation, we find that to be a really positive thing for our community,” Urscheler said.

For Berks and some of Pottstown, it’s an equity issue too. We need to be able to move people in an efficient manner so that they can get to jobs, they can get to shopping, they don’t have to own cars. So I mean, this is just such a win-win for all three counties,” Moskowitz said.

As far as the specifics of the plan, the line will also use a piece of the Norfolk Southern industrial line. While it initially plans to serve Reading, Phoenixville, Pottstown, and Philadelphia, Moskowitz said that it is possible that it could expand to include stops at places like Valley Forge Park.

And although SEPTA will not partner in the initial stages with SRPRA, it is very possible that the new railway will use SEPTA’s line when it gets to Norristown.

“Which means we have to have a dual motor engine, one that can handle the industrial line and then convert to electric,” Moskowitz said.

Scott France is the director of the Montgomery County Planning Commission and another member of the new transit authority.

“The best word to describe this whole process so far has been collaborative. Chester County has been a great partner, as well as Berks County,” France said.

He added that there were points over the last few years where people did not view the project as viable.

“It never was really viewed as achievable. There were a lot of efforts, but this seemed to be the moment where, if it were going to happen, the opportunity was now,” France said. “We heard an overwhelming percentage of positive responses during both the public hearing and leading up to it. And when we’ve reached out to communities … it’s just always been very encouraging to hear how much people want this rail service to come back, and how they think it would benefit their communities.”

France is excited for Pottstown and what a rail service could do for the borough. He believes that businesses could see that portion of the county as a more attractive place to get started in.

“We’re really actually very excited that Pottstown has a number of our disadvantaged communities in the county, and bringing service to those people that haven’t had it before is really another strong point of this project,” France said.

The next meeting for the committee-turned-authority is going to be at the end of June.

Now that it is a formal operation, SRPRA can accept funds. Moskowitz said the authority recently received a grant to fund a study with the help of U.S. Sen. Bob Casey and U.S. Rep. Chrissy Houlahan.

There is still no timeline for the project, but the public can expect more details regarding SRPRA’s plans during the last week of June.

Heat know that even without Embiid, 76ers will be challenge