“‘One More Moment’ to me means that I get to enjoy retirement, enjoy my wife and grandchildren, be outside, play disc golf, enjoy my friends.”
-Bill Bender
Suicide Attempt Survivor 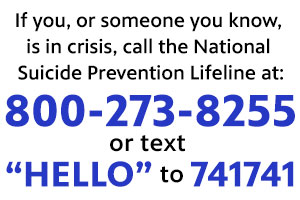 The following is a transcript of Bill Bender’s video story.

Hi. My name is Bill Bender, and in the past, I have not only had suicidal thoughts, but I did actually have a suicidal attempt.

I don’t remember exactly how young I was when I first felt depression, but I kind of recognized it more in retrospect as it started to affect me more as I got older.

But I’m pretty sure in high school and after high school, there were periods of time where I was pretty depressed, but I didn’t really know much about it.

The stigma caused me not to really reach out. So I more or less ignored it.

In 1995, I got very sick, my appendix ruptured. I ended up in the hospital for ten days and it was really a tough, tough experience. But I, like mentally, at the time, I was really strong and stoic.

And then I think about six months after all that, and I was healed, it started to hit me, you know, what I had gone through.

So I kind of got depressed, didn’t do anything for a while, didn’t tell anybody. And then finally it got to the point where I did make a phone call and, you know, I started going to a therapist.

It didn’t seem to help.

They put me on medication.

It just got worse.

I just didn’t think things were going to get better. It was like I was hopeless. You know, I was praying that things would and but it really got to the point that I thought, I can’t live like this.

I think that’s what kind of led me to, you know, what I did.

I do remember that I came to a decision and I was going to follow through with it.

The following day, I wrote a note I didn’t expect to, you know, wake up, and I did.

So I ended up in a mental treatment, mental health treatment facility for about three weeks.

I was eager to go. I knew I needed help.

And it was a huge relief.

And then it was easier because of the responses I got. Like, there was nobody I think that I ever said anything to that, looked at it as a negative and looked down on me for, you know, what I had gone through.

I was amazed on how many people have gone through, at least whether it was a mild depression or something worse.

You know, what I went through. I ran two marathons, ran four half marathons, got my teaching job, which I loved. Got married, now have grandchildren.

I still do get some feelings of sadness, but I definitely know how to deal with them better.

But I also feel like the fact that I know how to deal with them better, helps prevent them from even coming up in the first place.

If I could even help one person, you know, live another moment, or, you know, get past, you know, suicidal feelings, I’d be happy about that.

And my message to people that are going through it would primarily be, and I certainly lived this, but while I was as hopeless as I can possibly be and I was convinced that I wasn’t going to get better, I did get better.

And so I think no matter how bad things get, I feel pretty strongly that, you know, anybody, you know, if they take the right steps, can get better.

And I, and I think just reaching out and, you know, admitting it not only to yourself, but asking for help is, is the key.

You know, and I wish I had done it sooner.

“One More Moment” to me means that I get to enjoy retirement, enjoy my wife and grandchildren, be outside, play disc golf, enjoy my friends.

It just means the world to me.