Duke head coach Mike Krzyzewski walks along the sideline during the first half of a college basketball game against North Carolina in the semifinal round of the Men's Final Four NCAA tournament, Saturday, April 2, 2022, in New Orleans. (AP Photo/David J. Phillip) 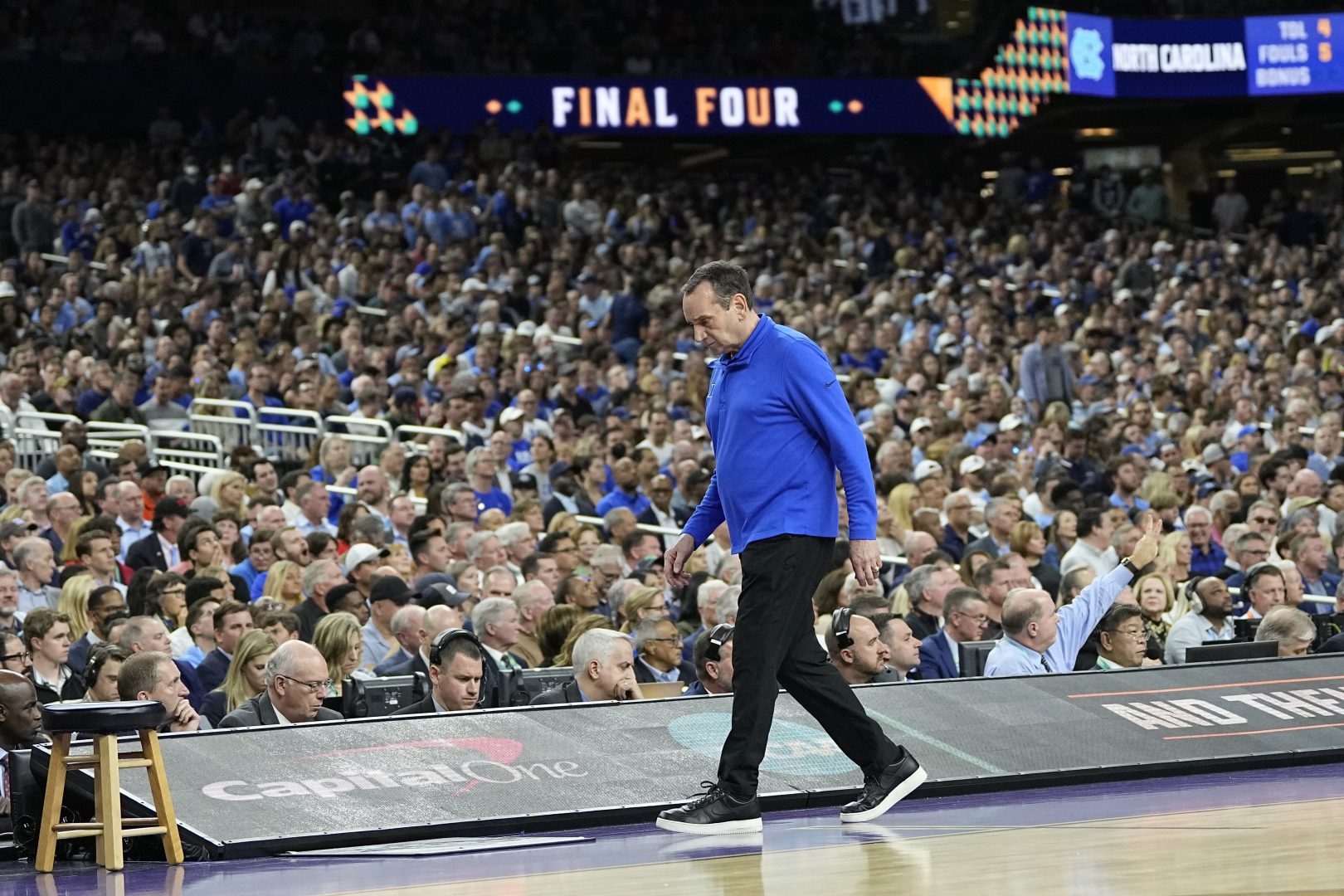 Duke head coach Mike Krzyzewski walks along the sideline during the first half of a college basketball game against North Carolina in the semifinal round of the Men's Final Four NCAA tournament, Saturday, April 2, 2022, in New Orleans. (AP Photo/David J. Phillip)

(New Orleans) — For the 48th time over 47 years of unparalleled coaching, Duke’s Mike Krzyzewski took the slow walk to midcourt and shook the hand of the North Carolina coach who beat him.

After that, he found his wife, Mickie, and they made the slow, sad walk, hand-in-hand, off the Superdome floor. Saturday night’s 81-77 setback in the national semifinal showdown between archrivals marked Coach K’s last loss, and one of his toughest losses, too.

“I’m sure at some time, I’ll deal with this in my own way,” said the coach, who had announced before the start of the season that 2021-22 would be his last.

Krzyzewski’s remarkable career came to gut-wrenching close after Caleb Love made a key 3-pointer and three late free throws to lift the Tar Heels to their thrill-a-minute victory.

This was the 258th, most consequential and maybe, just maybe, the very best meeting between these teams, whose arenas are separated by a scant 11 miles down on Tobacco Road.

The eighth-seeded Tar Heels (29-9), of all teams, pinned the 368th and final loss on Krzyzewski. He finished with 1202 wins. His lifetime record against North Carolina fell to 50-48. Losses No. 47 and 48 are ones Carolina fans will treasure forever. They were partying early into Sunday morning on Franklin Street in Chapel Hill. This latest win came exactly four weeks after the Tar Heels ruined the going-away party in Coach K’s final home game at Cameron Indoor Stadium.

That loss hurt. “Unacceptable,” he called it, still knowing there was time to regroup for one last run into March Madness. They made that run, but the last loss stopped that all in its tracks — one agonizing win short of a title game and a chance at his sixth championship.

Krzyzewski said he had a locker room full of crying players when it was over.

“It’s not about me,” he insisted. “Especially right now. I’ve said my entire career that I wanted my seasons to end where my team was either crying tears of joy or tears of sorrow. Because then you knew that they gave everything.”

They gave everything all the way through the nip-and-tuck contest — neither team led by more than seven — that concluded with an edge-of-the-seat stretch run that Duke played without a timeout. When the final buzzer of his career blared, Krzyzewski shook the hand of Carolina’s rookie coach, Hubert Davis.

Instead of Krzyzewski going for his sixth title, on Monday, Carolina will try to win its seventh. It will be Davis, Love, who led the Tar Heels with 28 points, and R.J. Davis, who scored 18, going against Kansas, which beat Villanova 81-65 earlier in the undercard.

“Dwelling on the two wins against Duke doesn’t help us against Kansas,” said Hubert Davis, who took over for Roy Williams this season and has now brought Carolina to its 12th title game.

Maybe not, but what a game — as good as any these teams have played in an ancient rivalry that has so-often determined conference titles, or, at the very least, bragging rights in a state where basketball is king. Their first-ever meeting in the NCAA Tournament, this one, featured 18 lead changes and 12 ties.

It also featured another breakout performance from Love, whose 28 points after an 0-for-4 start were one more than what he put up in the second half of a win last week against UCLA in the Sweet 16.

“It means everything to me,” Love said of his key 3 with 25 seconds left.

There was so much to talk about in this instant classic, one that Krzyzewski, clad in his blue pullover with a “D” embroidered on the chest, watched most of while perched on a stool situated on the sideline above the Duke bench.

At around the 2-minute mark, the teams traded three straight 3s. Wendell Moore Jr.’s 3-pointer with 1:19 left ended the flurry and gave Duke a 74-73 lead. It was the last lead of Krzyzewski’s career.

R.J. Davis came back with two free throws, then after Duke’s Mark Williams, in foul trouble all night, missed a pair from the line, Carolina worked the ball around the perimeter.

Tar Heels guard Leaky Black set a pick — make that threw a block — on Trevor Keels to free up Love, who drained a 3 from near the top for a 78-74 lead and what felt like breathing room in this one.

Love made three more free throws down the stretch, and then it was over. Krzyzewski and his wife walked off the floor together, same as they had after four wins during the run to his record 13th Final Four.

Near the other bench, Hubert Davis was crying again — just like Ol’ Roy — much as he did last weekend when North Carolina punched its ticket to its record 21st Final Four.

“I felt like over the last two or three years , North Carolina wasn’t relevant,” said Davis, whose biggest win came a year to the date Williams announced his own retirement. “North Carolina should never be irrelevant. It should be front and center with the spotlight on them.”

Freshman Paolo Banchero led the Blue Devils with 20 points and his classmate, Keels, had 19. Another freshman, A.J. Griffin, never really got untracked, finishing with only six points.

Chances are Griffin and Banchero will be following Krzyzewski out the door. They are the latest in his revolving door of “One and Done” players, though neither they nor Zion Williamson in 2019 could lead Duke back to the promised land.

North Carolina is back on the verge again, playing in its third final since 2016 and looking for its second title since 2017 Win or lose, though, 2022 will always be remembered as the year North Carolina sent Coach K packing for good.

One team’s joy is another team’s pain.

“When you’re in the arena, either you’re going to come out feeling great or feel agony, but you always will feel great about being in the arena,” Krzyzewski said. “I was in the arena for a long time, and these kids made my last time in the arena an amazing one.”

Carolina big man Armando Bacot finished with his seventh straight double-double — 11 points and 21 boards — despite fouling out down the stretch. Duke’s Williams played the entire game in foul trouble. He finished with four buckets for eight points — all of them on dunks.

Monday will mark the fourth meeting in the season’s final week between Kansas and North Carolina, but the first in the national final since 1957, before the tournament had become what it is today.

Carolina won the title game in triple overtime over Wilt Chamberlain and the Jayhawks. The Tar Heels won in 1993 on the way to the title and Kansas returned the favor in 2008, then also went on to take the championship.

Biden is the latest president to go off script on Russia