The Million MAGA March drew thousands of President Trump's supporters, including members of far-right groups such as the Proud Boys, Patriot Front and others, to Washington, D.C., last month.

But they are are adapting: joining protests at city council and school board meetings against vaccine and mask mandates and over how public schools teach kids about race. 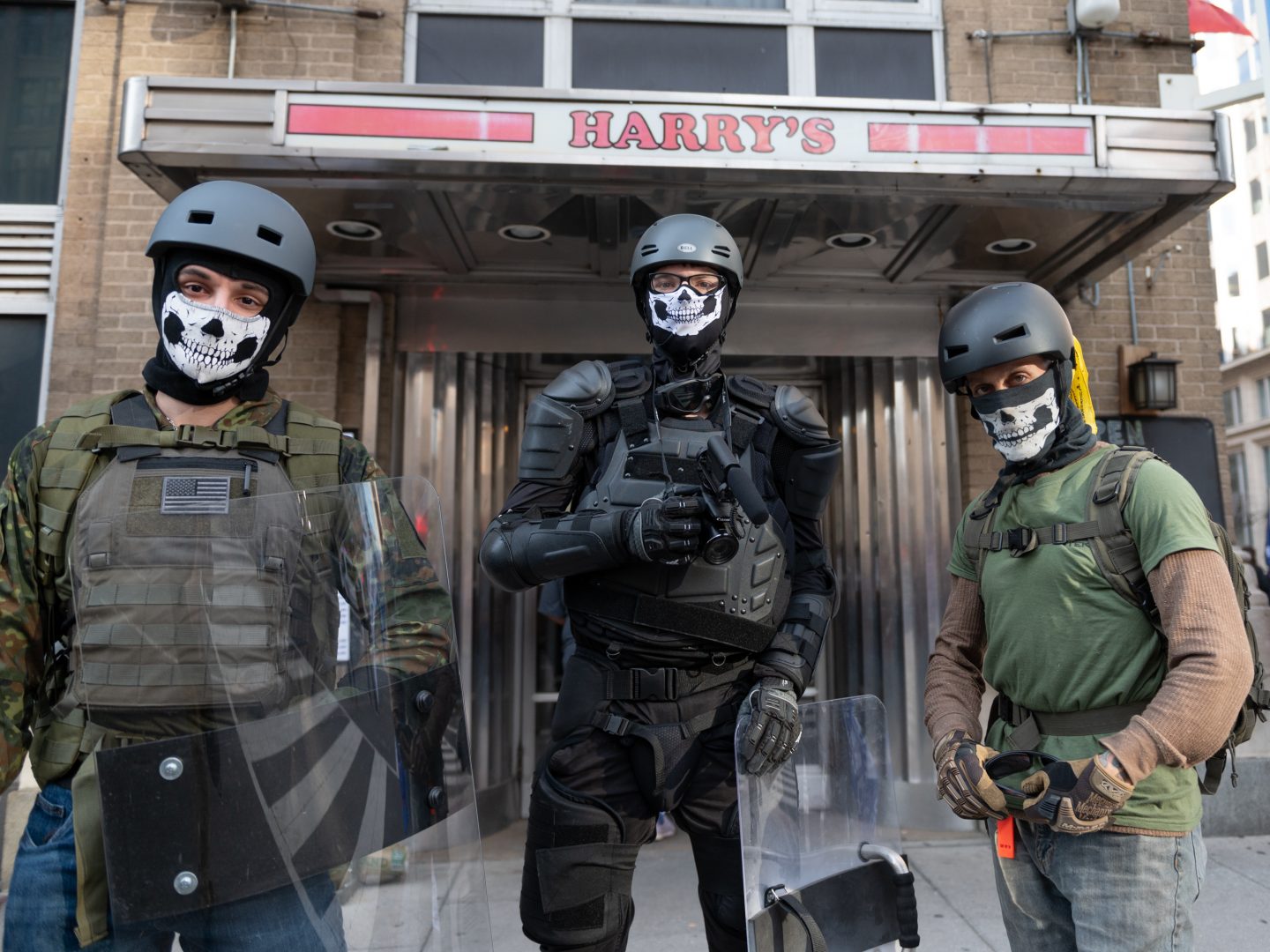 The Million MAGA March drew thousands of President Trump's supporters, including members of far-right groups such as the Proud Boys, Patriot Front and others, to Washington, D.C., last month.

(Washington) — It’s been called the Great Deplatforming. In the hours and days after the U.S. Capitol insurrection on Jan. 6, 2021, Facebook, Twitter and YouTube kicked off then-President Donald Trump as well as many involved in planning the attack.

Since then, far-right groups that had used the big tech platforms to spread lies about the 2020 U.S. presidential election, stoke conspiracy theories and call for violence have been scrambling to find new homes on the internet.

“Deplatforming…produced this great scattering where groups that were banned or groups that believed their bans were imminent or forthcoming in this giant game of musical chairs, hopping from platform to platform,” said Jared Holt of the Atlantic Council’s Digital Forensic Research Lab and the author of a new report on domestic extremism.

A new platform comes with conspiracy theories and promo codes

They turned to the encrypted messaging app Telegram, video streaming services DLive and Rumble, and social media sites like Parler, Gab and Gettr that claim to allow users to post things that would get them in trouble on Facebook or Twitter.

Some right-wing figures have even launched their own platforms. That includes Mike Lindell, the MyPillow CEO turned conspiracy theorist who is being sued for defamation over his claims about rigged voting machines.

Lindell regularly broadcasts live online. During an interview with former President Trump about his baseless claims of election fraud, promo codes for MyPillow appeared at the bottom of the screen.

Experts say the dispersal of the most high-profile figures and groups promoting the “Big Lie” about the election has had an impact.

A demonstrator wears a badge for the extremist group the Oath Keepers on a protective vest during a protest outside the Supreme Court in Washington, D.C., on Jan. 5, 2021.

“The best research that we have suggests that deplatforming is very powerful,” said Rebekah Tromble, director of the Institute for Data, Democracy and Politics at George Washington University. “It means that really prominent actors who helped stoke the Stop the Steal campaign that led to the insurrection have much less reach, get much less audience and attention. And that is very, very, very important.”

As a result, the alternative tech platforms have become echo chambers for those clinging to the false belief that Trump was robbed of the presidency.

None of them has broken out as the main destination for the far right and die-hard Trump supporters.

“I would say it’s going to be an uphill battle for most of these guys. They don’t all have the ability to make their own platforms, and a lot of times they lose their legitimacy being off of the mainstream ones,” said Megan Squire, a computer science professor at Elon University.

One reason is Trump himself. Rather than join any of the existing alternative platforms, the former president has been touting plans for his own social network. But it hasn’t launched yet, and its corporate structure is under investigation by federal regulators.

In the meantime, far-right groups are adapting: joining protests at city council and school board meetings against vaccine and mask mandates and over how public schools teach kids about race.

This new local focus doesn’t require a big network to have an impact, the Atlantic Council’s Holt said.

“If the purpose of organizing is just to get a dozen people to turn out at a local government body, then you know, they don’t need a channel or an account with 100,000 followers on it. They might just need a hundred,” he said.

That’s made extremists less visible on the national stage, but no less of a threat, according to Candace Rondeaux of the think tank New America, who has been studying Parler’s role in the Capitol attack.

Putting together that picture will be the challenge for researchers, journalists and law enforcement in 2022.

President Biden blasts Trump for 'spreading a web of lies' in a Jan. 6 speech