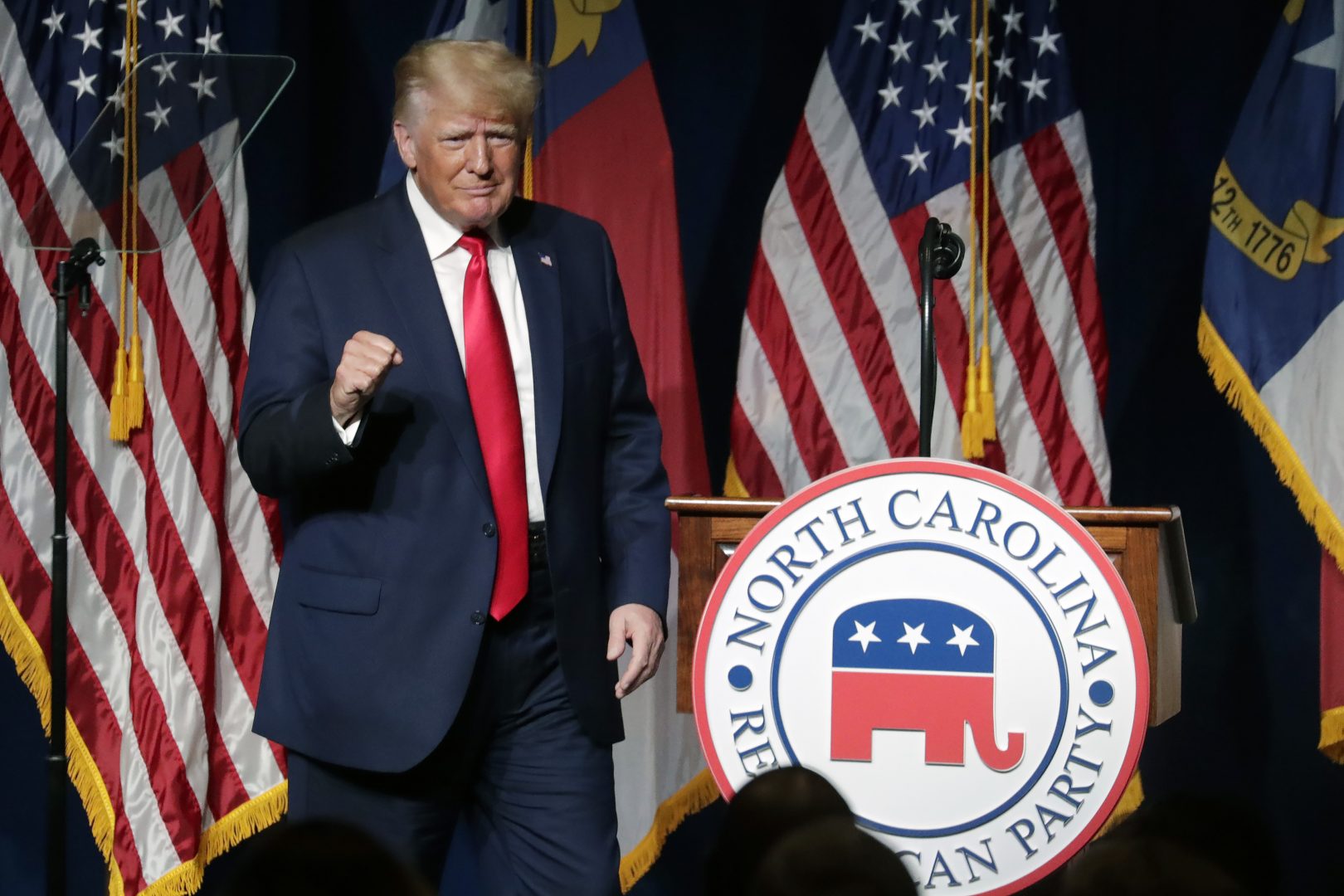 In the weeks leading up to the deadly insurrection at the U.S. Capitol on Jan. 6, a handful of Americans — well-known politicians, obscure local bureaucrats — stood up to block then-President Donald Trump’s unprecedented attempt to overturn a free and fair vote of the American people.

In the year since, Trump-aligned Republicans have worked to clear the path for next time.

In battleground states and beyond, Republicans are taking hold of the once-overlooked machinery of elections. While the effort is incomplete and uneven, outside experts on democracy and Democrats are sounding alarms, warning that the United States is witnessing a “slow-motion insurrection” with a better chance of success than Trump’s failed power grab last year.

They point to a mounting list of evidence: Several candidates who deny Trump’s loss are running for offices that could have a key role in the election of the next president in 2024. In Michigan, the Republican Party is restocking members of obscure local boards that could block approval of an election. In Wisconsin and Pennsylvania, the GOP-controlled legislatures are backing open-ended “reviews” of the 2020 election, modeled on a deeply flawed look-back in Arizona. The efforts are poised to fuel disinformation and anger about the 2020 results for years to come.

All this comes as the Republican Party has become more aligned behind Trump, who has made denial of the 2020 results a litmus test for his support. Trump has praised the Jan. 6 rioters and backed primaries aimed at purging lawmakers who have crossed him. Sixteen GOP governors have signed laws making it more difficult to vote. An Associated Press-NORC Center for Public Affairs Research poll showed that two-thirds of Republicans do not believe Democrat Joe Biden was legitimately elected as president.

The result, experts say, is that another baseless challenge to an election has become more likely, not less.

“It’s not clear that the Republican Party is willing to accept defeat anymore,” said Steven Levitsky, a Harvard political scientist and co-author of the book “How Democracies Die.” “The party itself has become an anti-democratic force.”

American democracy has been flawed and manipulated by both parties since its inception. Millions of Americans — Black people, women, Native Americans and others — have been excluded from the process. Both Republicans and Democrats have written laws rigging the rules in their favor.

This time, experts argue, is different: Never in the country’s modern history has a a major party sought to turn the administration of elections into an explicitly partisan act.
Republicans who sound alarms are struggling to be heard by their own party. GOP Reps. Liz Cheney of Wyoming or Adam Kinzinger of Illinois, members of a House committee investigating the Jan. 6 insurrection, are often dismissed as party apostates. Others have cast the election denialism as little more than a distraction.

But some local officials, the people closest to the process and its fragility, are pleading for change. At a recent news conference in Wisconsin, Kathleen Bernier, a GOP state senator and former elections clerk, denounced her party’s efforts to seize control of the election process.

“These made up things that people do to jazz up the base is just despicable and I don’t believe any elected legislator should play that game,” said Bernier.

Bernier’s view is not shared by the majority of the Republicans who control the state Legislature in Wisconsin, one a handful of states that Biden carried but Trump wrongly claims he won. Early in 2021, Wisconsin Republicans ordered their Legislative Audit Bureau to review the 2020 election. That review found no significant fraud. Last month, an investigation by the conservative Wisconsin Institute for Law and Liberty came to the same conclusion.

Still, many Republicans are convinced that something went wrong. They point to how the nonpartisan Wisconsin Elections Commission — which the GOP-led Legislature and then-Republican governor created eight years ago to run the state’s elections — changed guidance for local elections officers to make voting easier during the pandemic.

That’s led to a struggle for control of elections between the state Legislature and the commission.

“We feel we need to get this straight for people to believe we have integrity,” said GOP Sen. Alberta Darling, who represents the conservative suburbs north of Milwaukee. “We’re not just trying to change the election with Trump. We’re trying to dig into the next election and change irregularities.”

Republicans are also remaking the way elections are run in other states. In Georgia, an election bill signed this year by the GOP governor gave the Republican-controlled General Assembly new powers over the state board of elections, which controls its local counterparts.

The law is being used to launch a review of operations in solidly-Democratic Fulton County, home to most of Atlanta, which could lead to a state takeover. The legislature also passed measures allowing local officials to remove Democrats from election boards in six other counties.

In Pennsylvania, the GOP-controlled legislature is undertaking a review of the presidential election, subpoenaing voter information that Democrats contend is an unprecedented intrusion into voter privacy. Meanwhile, Trump supporters are signing up for local election jobs in droves. One pastor who attended the Jan. 6 rally in the nation’s capital recently won a race to become an election judge overseeing voting in a rural part of Lancaster County.

In Michigan, the GOP has focused on the state’s county boards of canvassers. The little-known committees’ power was briefly in the spotlight in November of 2020, when Trump urged the two Republican members of the board overseeing Wayne County, home to Democratic-bastion Detroit, to vote to block certification of the election.

After one of the Republican members defied Trump, local Republicans replaced her with Robert Boyd, who told The Detroit Free Press that he would not have certified Biden’s win last year.

A similar swap — replacing a tradition Republican with one who parroted Trump’s election lies — occurred in Macomb County, the state’s third most populous county.

Michigan officials say that if boards of canvassers don’t certify an election they can be sued and compelled to do so. Still, that process could cause chaos and be used as a rallying cry behind election disputes.

“They’re laying the groundwork for a slow-motion insurrection,” said Mark Brewer, an election lawyer and former chair of the Michigan Democratic Party.

The state’s top election official, Secretary of State Jocelyn Benson, warned: “The movement to cast doubt on the 2020 election has now turned their eyes … to changing the people who were in positions of authority and protected 2020.”

Multiple Republicans have lined up to challenge her, including Kristina Karamo, a community college professor who alleged fraud in the 2020 elections and contended that the Jan. 6 attackers were actually antifa activists trying to frame Trump supporters.

Trump has been clear about his intentions: He is seeking to oust statewide officials who stood in his way and replace them with allies.

“We have secretary of states that did not do the right thing for the American people,” Trump, who has endorsed Karamo, told The Associated Press this month.

The most prominent Trump push is in Georgia, where the former president is backing U.S. Rep. Jody Hice, who voted against Biden’s Electoral College victory on Jan. 6, in a primary race against the Republican Secretary of State, Brad Raffensperberg. Raffensperger rejected Trump’s pleas to “find” enough votes to declare him the winner.

Trump also encouraged former U.S. Sen. David Perdue to challenge Gov. Brian Kemp in the GOP primary. Kemp turned down Trump’s entreaties to declare him the victor in the 2020 election.

In October, Jason Shepherd stepped down as chair of the Cobb County GOP after the group censured Kemp. “It’s shortsighted. They’re not contemplating the effects of this down the line,” Shepherd said in an interview. “They want their pound of flesh from Brian Kemp because Brian Kemp followed the law.”

In Nevada, multiple lawsuits seeking to overturn Biden’s victory were thrown out by judges — including one filed by Jim Marchant, a former GOP state lawmaker now running to be secretary of state. The current Republican secretary of state, Barbara Cegavske, who is term limited, found there was no significant fraud in the contest.

Marchant said he’s not just seeking to become a Trump enabler, though he was endorsed by Trump in an unsuccessful 2020 bid for Congress. “I’ve been fighting this since before he came along,” Marchant said of Trump. “All we want is fair and transparent elections.”

In Pennsylvania, Republican state Sen. Doug Mastriano, who organized buses of Trump supporters for Trump’s rally near the White House on Jan. 6, has signaled he’s running for governor. In Arizona, state Rep. Mark Finchem’s bid to be secretary of state has unnerved many Republicans, given that he hosted a daylong hearing in November 2000 that featured Trump adviser Rudolph Giuliani. Former news anchor Kari Lake, who repeats Trump’s election falsehoods, is running to succeed Republican Gov. Doug Ducey, who stood up to Trump’s election-year pressure and is barred from another term.

Elsewhere in Arizona, Maricopa County Auditor Stephen Richer, who defended his office against the conspiratorial election review, has started a political committee to provide financial support to Republicans who tell the truth about the election. But he’s realistic about the persistence of the myth of a stolen election within his party’s base.

“Right now,” Richer said, “the incentive structure seems to be strongly in favor of doing the wrong thing.”

In Michigan, Pennsylvania and Wisconsin, Democratic governors have been a major impediment to the GOP’s effort to overhaul elections. Most significantly, they have vetoed new rules that Democrats argue are aimed at making it harder for people of color to vote.

Governors have a significant role in U.S. elections: They certify the winners in their states, clearing way for the appointment of Electoral College members. That raises fears that Trump-friendly governors could try to certify him — if he were to run in 2024 and be the GOP nominee — as the winner of their state’s electoral votes regardless of the vote count.

Additionally, some Republicans argue that state legislatures can name their own electors regardless of what the vote tally says.

But Democrats have had little success in laying out the stakes in these races. It’s difficult for voters to believe the system could be vulnerable, said Daniel Squadron of The States Project, a Democratic group that tries to win state legislatures.

“The most motivated voters in America today are those who think the 2020 election was stolen,” he said. “Acknowledging this is afoot requires such a leap from any core American value system that any of us have lived through.”

The public is weighing in on Pa.'s redistricting ideas. So far, they don't like what they see.