Struggling Eagles have ton of issues, but no QB controversy

The Philadelphia Eagles are off to their worst start since 1999 at 2-5 and there’s plenty of blame to spread around. 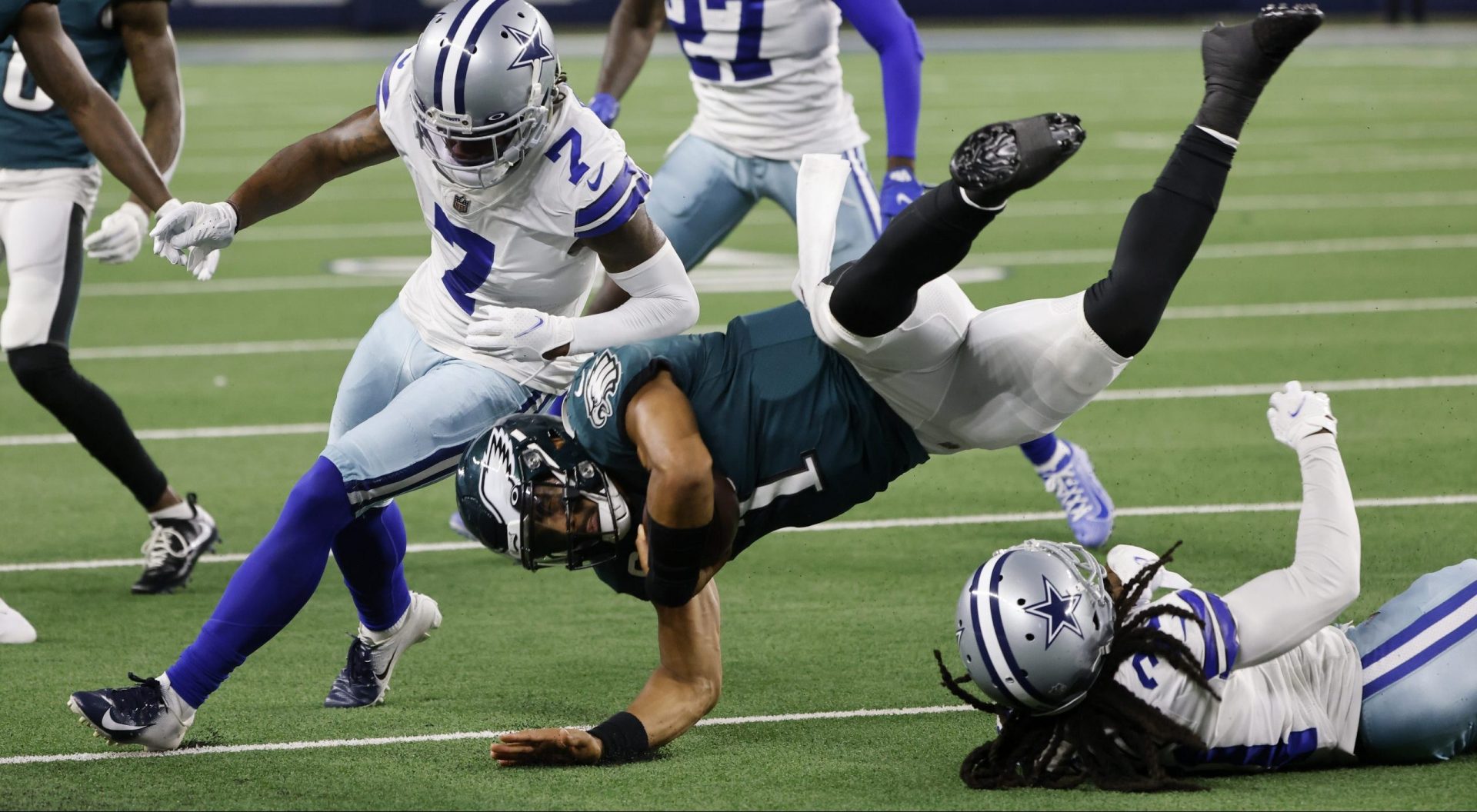 (Philadelphia) — It took seven games for Nick Sirianni to have to publicly support Jalen Hurts.

The Philadelphia Eagles are off to their worst start since 1999 at 2-5 and there’s plenty of blame to spread around. Of course, the rookie coach, the second-year QB and first-year defensive coordinator Jonathan Gannon get most of it.

Sirianni has no plans to bench Hurts following another inconsistent performance in a 33-22 loss at Las Vegas. Hurts finished with solid numbers — 18 of 34 for 236 yards and two touchdowns passing and 61 yards rushing — but he was 8 of 16 for 135 yards until the Eagles trailed 33-7.

Hurts has led Philadelphia’s offense to 18 TDs in seven games with seven coming after the outcome was decided and the Eagles trailing by at least 19 points. The Eagles will have a new backup this week after veteran Joe Flacco was traded to the New York Jets for a conditional sixth-round pick next year. Gardner Minshew, who was 7-13 in 20 starts in Jacksonville, steps into the No. 2 spot.

“Obviously, I really like Gardner and I think he’s a good backup, but I got a ton of faith in Jalen and he will be our starting quarterback,” Sirianni said Monday.

“I’m an aggressive player and that’s how I made my living, playing in the backfield and splitting double teams,” Cox said after the loss. “I’m not used to double teams staying on me 2, 3 yards down the field.” 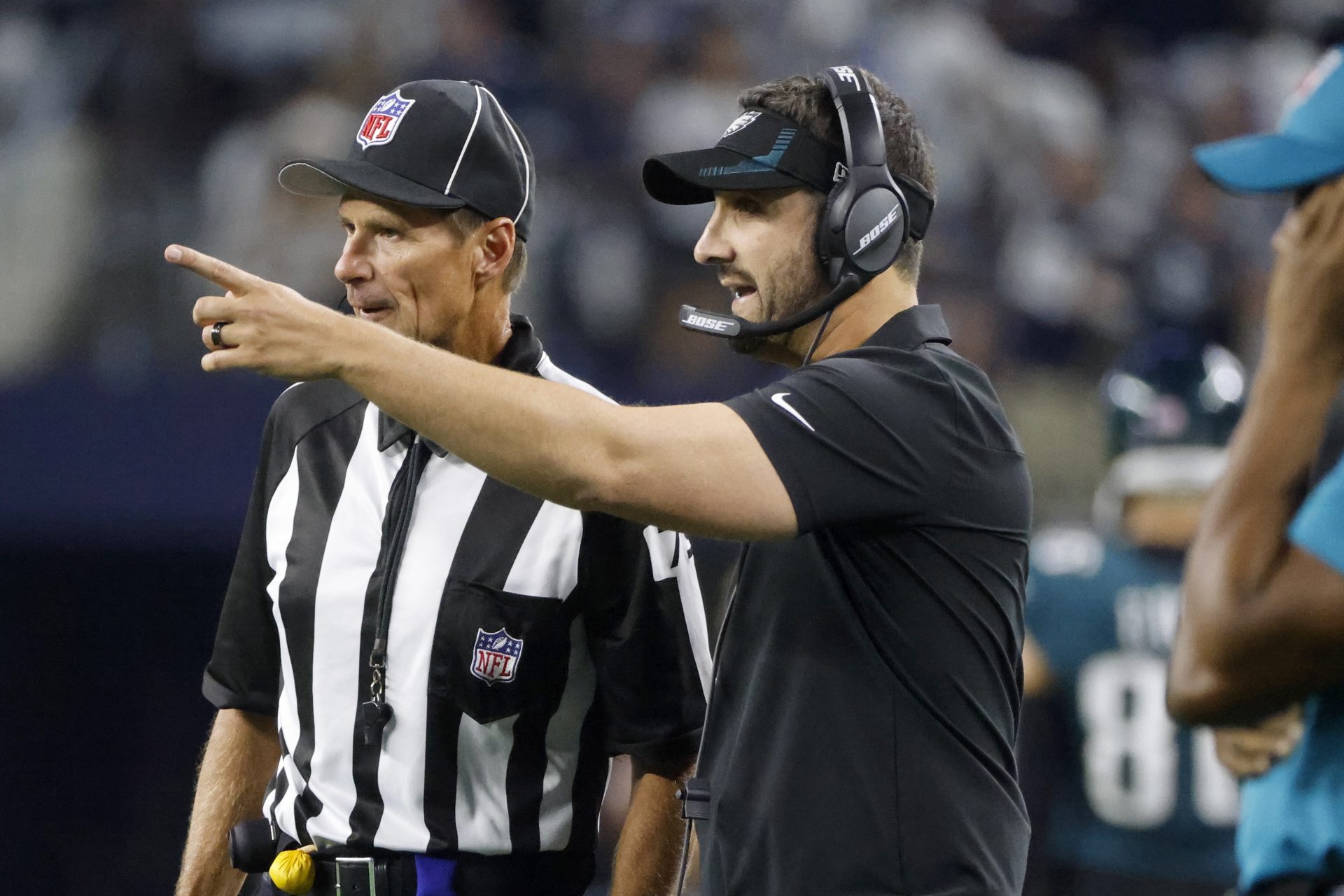 Philadelphia Eagles head coach Nick Sirianni, front, talks with an official in the first half of an NFL football game against the Dallas Cowboys in Arlington, Texas, Monday, Sept. 27, 2021.

He also admitted to confronting the coaches on the sideline.

“I didn’t agree with what was called on the defense so I kind of let my frustration go, and that’s part of the game,” he said.

“Everyone has frustration after you lose. We’ll talk about everything, we’ll go through it,” Sirianni said.

But Cox’s criticism is valid. Philadelphia’s defense under Gannon has been poor. Opponents are scoring 26.4 points per game against the Eagles and quarterbacks are completing 74.3% of their passes.

“How are we going to improve is always going to be discussed whether a player says something about it or not,” Sirianni said.

The Eagles ran the ball well on the opening drive that ended with a TD. Miles Sanders had 30 yards on six carries, but injured his ankle on the next series.

The pass defense has been horrendous. Derek Carr completed 91.2% of his passes (31 of 34), the second-highest completion rate in NFL history by a QB throwing at least 30 passes. He became the fourth quarterback to complete at least 80% against the Eagles in only seven games.

Minshew hasn’t been active for a game this season, but he’s one step closer to starting.

Hurts continues to have accuracy issues. He makes impressive plays, but too often they’ve occurred when it’s too late.

Sanders is week to week with his ankle injury.

7 — The Raiders averaged 7.0 yards per play against Philadelphia’s defense.

The Eagles visit the winless Detroit Lions (0-7) on Sunday.