Meek Mill poses for a portrait at the Roc Nation offices in New York on Sept. 22, 2021, to promote his upcoming album “Expensive Pain.” The Philadelphia rapper is planning a concert on Oct. 23 at Madison Square Garden to celebrate the new album.

Feelings of uncertainty, along with fears of distrust and betrayal created from the ghosts of his past, have been seared into his new album.

(New York) — Meek Mill is not behind prison bars. He’s no longer required to check in with parole officers. But despite this freedom, the rapper has not fully rid himself of invisible shackles that still confine him.

“I just feel like I’m a pullover away from running into the wrong cop, getting into a wild situation,” said the 34-year-old rapper and social activist, born Robert Williams. “My whole adult life, I was on probation the whole way. So, it’s like a natural feeling. I would be lying if I said I felt totally free.”

Feelings of uncertainty, along with fears of distrust and betrayal created from the ghosts of his past, have been seared into his new album, “Expensive Pain.”

Staying true to his brand, Meek Mill’s latest project explores balancing fame and wealth while carrying the mental scars from a rough Philadelphia upbringing. Like most things of value, his success has come with a cost.

“In the hood, I had ‘poverty pain’…when I turned to the streets, I’m 15, 16 years old, not knowing what I’m going to eat at night, not knowing what you’re going to wear tomorrow because we left the house. Your mom at work or dad dead,” said the rapper, who was 5 when his father was murdered. “This pain I’m getting now, it’s like I’m losing family members because I ain’t letting people borrow money.”

“Expensive Pain” is Meek Mill’s first full-length project since 2018’s Grammy-nominated “Championships” which came out seven months after his prison release following a controversial sentence in 2017 for technical probation violations involving a decade-old gun and drug possession case. The Pennsylvania trial judge sentenced him to two to four years in prison, but a court ordered his release in April 2018.

On July 24, 2019, an appeals court tossed his conviction over doubts about the arresting officer’s credibility. The next month, Meek Mill pleaded guilty to a misdemeanor gun charge in a deal that resolved the 2007 arrest, ending his legal limbo with the criminal justice system. He is now an activist for justice reform.

Meek Mill at the Players Coalition Town Hall on Policing in the city, at Community College of Philadelphia, on Monday, Oct. 28, 2019.

While known for gritty lyrics and rapid, aggressive rhyme delivery, Meek Mill expands his repertoire this time around. He takes a page from his younger collaborators by experimenting with melodic rap — the sound that now dominates hip-hop — on songs like “On My Soul,” “We Slide” featuring Young Thug and “Angels (RIP Lil Snupe).”

“Through quarantine, I had like a vicious writer’s block because every time I try to go to a next level, I get real uncomfortable in trying new things. And melody is a lane where all the younger guys been in,” said Meek Mill, who revealed that he practiced harmonizing for nearly a year. “I just got in there and just tried my own thing and stuck to it, and I kind of created an extra lane for my style.”

Roc Nation executive Mike Brinkley says Meek Mill is part of a handful of current artists respected enough to bridge between older generations of rap fans who place emphasis on lyrics and writing and younger fans who tend to fixate on the overall vibe of the music.

“He can still get the respect of the older hip-hop generation — the Jays (Jay-Z), the Nases with his lyrical ability — but also will still relate and still appeal to these younger artists,” said Brinkley.

While Meek Mill holds his own with melodic rap, he didn’t abandon his expertise.

On “Halo,” which features rising R&B singer Brent Faiyaz, Meek Mill illustrates the juxtaposition of making it out of an impoverished community while family and friends remain: “I just wanna go to my hood, wheelie a dirt bike, and post up on the block with the ones that think that I forgot, how we was standin’ on the corner with them Glocks. But I know if I go back to that corner, I’ll get shot, or get robbed, in a box to make me fade away,” he rhymes.

“You’re living in so much trauma and buried in trauma, you never even get a chance to really develop and become the person you’re supposed to be,” said Meek Mill about his hometown Philadelphia, which had 499 murders in 2020. “You see somebody get murdered yesterday, you ain’t going to be thinking about that for a week…You’re gonna be thinking about that for like 12 years on a daily basis. And if something else happens next week in your neighborhood, it’s gonna pile up.”

But this fifth solo studio project is not all tales of street life — this is Meek Mill after all. There are plenty of tracks like “Outside (100 MPH)” and “Sharing Locations” featuring Lil Baby and Lil Durk, which has charted on the Billboard Global 200, that celebrate the pleasures that come with being one of the world’s biggest rap stars.

Both “Hot” with Moneybagg Yo and “Me (FWM),” which samples Lil Jon’s “Bia’ Bia’” featuring a standout verse from A$AP Ferg are club-ready bounce tracks, and “Ride for You” with Kehlani is a feel-good record showcasing the lost art of the hip-hop and R&B duet. 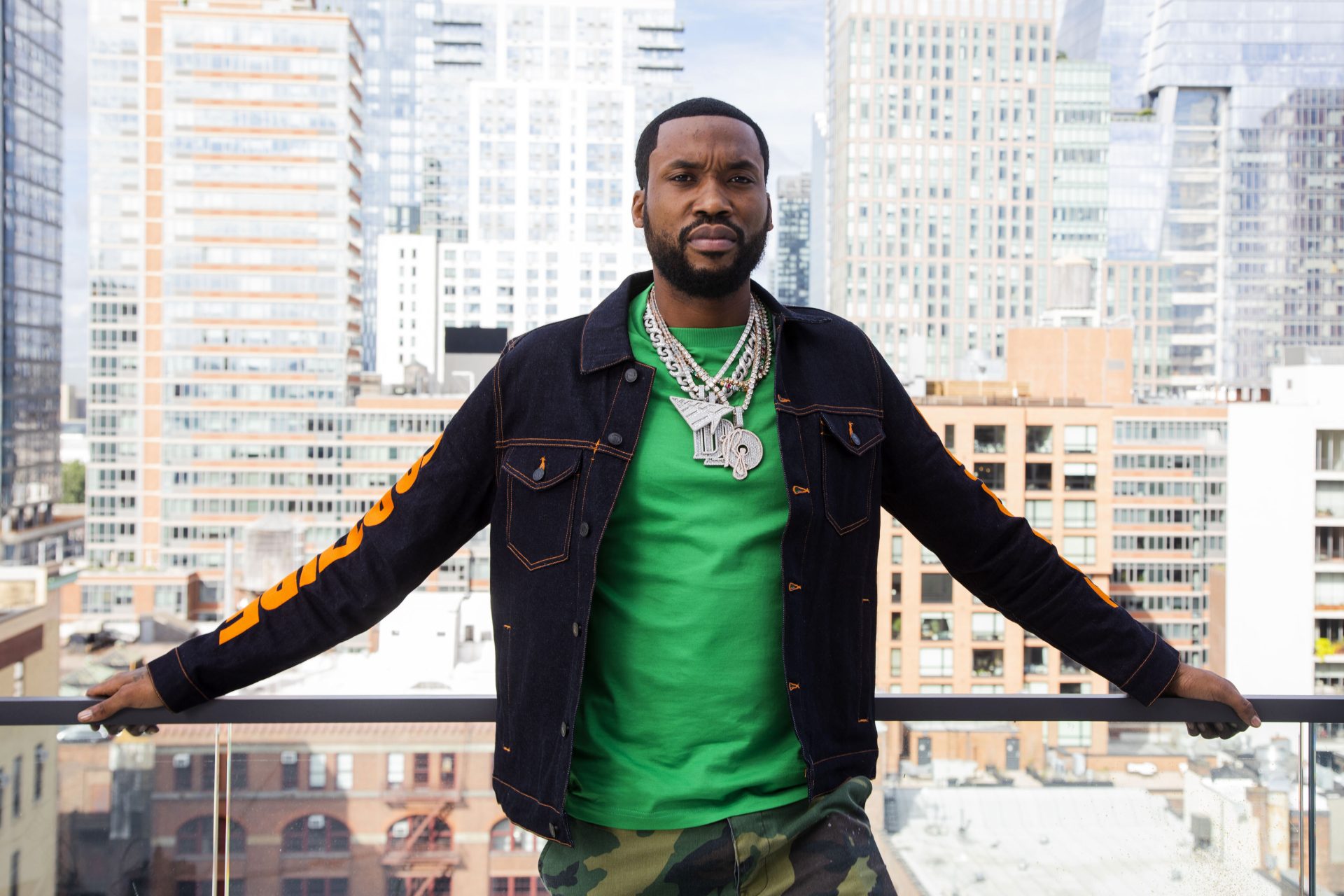 Meek Mill poses for a portrait at the Roc Nation offices in New York on Sept. 22, 2021, to promote his upcoming album “Expensive Pain.” The Philadelphia rapper is planning a concert on Oct. 23 at Madison Square Garden to celebrate the new album. 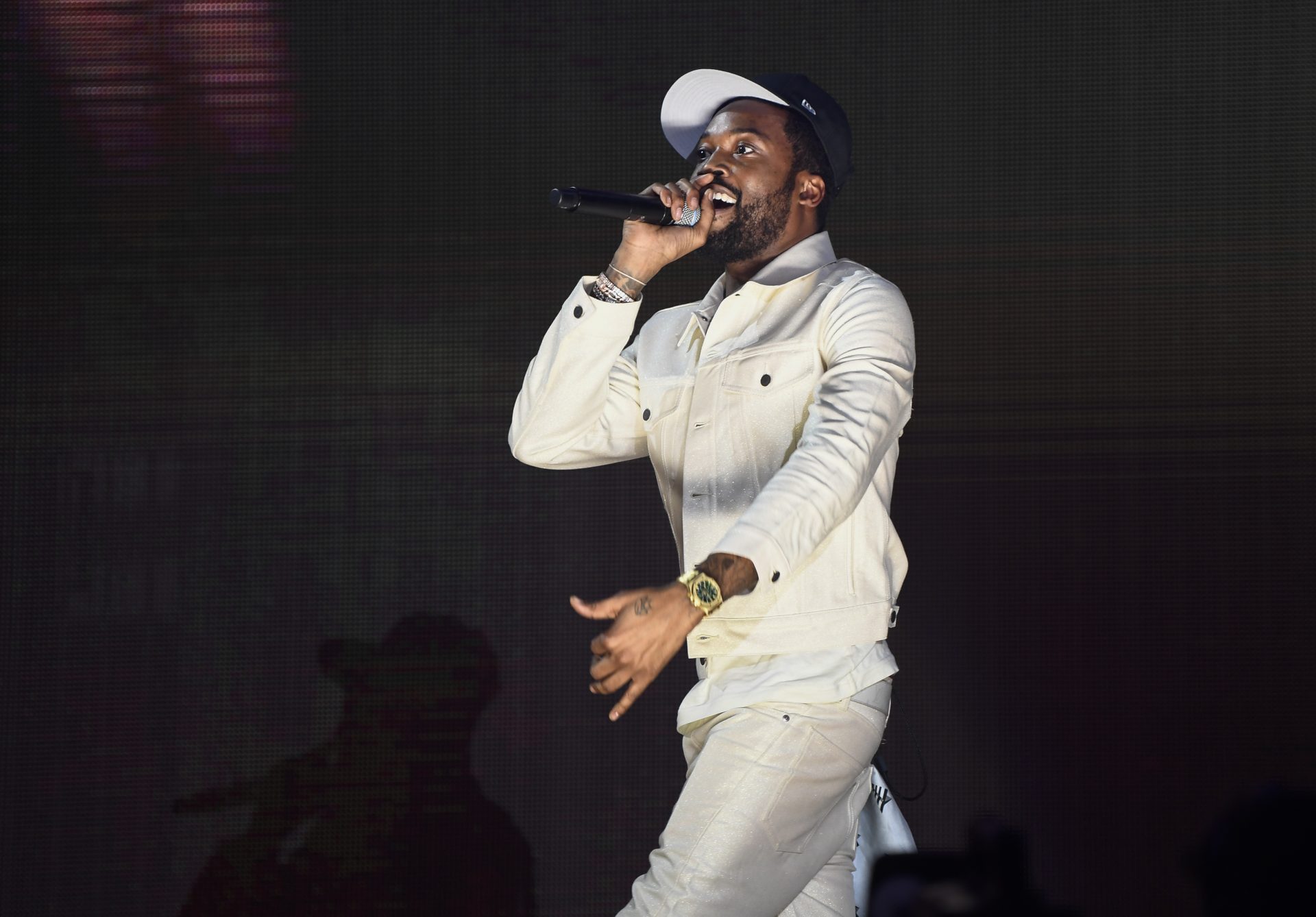 Meek Mill performs at Global Citizen Live in Central Park in New York on Sept. 25, 2021. Mill is back with his fifth solo studio album, “Expensive Pain.” The Philadelphia rapper is planning a concert on Oct. 23 at Madison Square Garden to celebrate the new album.

Meek Mill, who politely requested an earlier interview so he could make the two-hour trek from New York to the South Jersey area to attend his 10-year-old’s first football game, also reveals small glimpses of life as a dad. He also has a 1-year-old son.

On the album’s title track, he says: “I keep my dreams for the fame and all the spoiled lil’ (expletive), ’cause I got two sons that’s kings and they like spoiled lil bros, and they want everything — they call, I buy — I order them clothes.”

Speaking on fatherhood, Meek said “I grew up in a bad environment, but my son won’t have to experience that. And, you know, just (teaching) him to become better than me is a responsibility that I took on…For my son, his dad is on the road more, me and his mom not together — we’re not in the same household. He doesn’t get the luxury of a full family, but he’s not going to live the way I came up. He’s going to live probably 100 times better.”

In August, the “Dreams and Nightmares” rapper received the Nelson Mandela Changemaker Award for his work as co-chair with the REFORM Alliance. Jay-Z, Meek Mill and others formed the coalition to lobby for changes to state probation and parole laws.

He may not have envisioned his own legal woes would spur him to social activism or seek changes in the same type of neighborhoods that he grew up in, but he’s not running from that work.

“He tries to be as positive as he can and be a positive influence without being preachy,” said Brinkley. “He’s open about, ‘Look, I make mistakes every day. But try to look at what I do and try another way.’”

If Meek Mill had known that he’d experience prison, poverty — and the trauma that comes with them — as a gateway to the success he has now, would he pay those costs?

“Seeing people die and to have PTSD from that, it ain’t worth it to get no money,” explained Meek. “It just happened to be the situation. I appreciate it, and it’s my life that built me into who I am. But it ain’t never worth it.”