Diagram for plan to build 15 "tiny homes" and a community center to be built south of PennDOT building in Harrisburg. 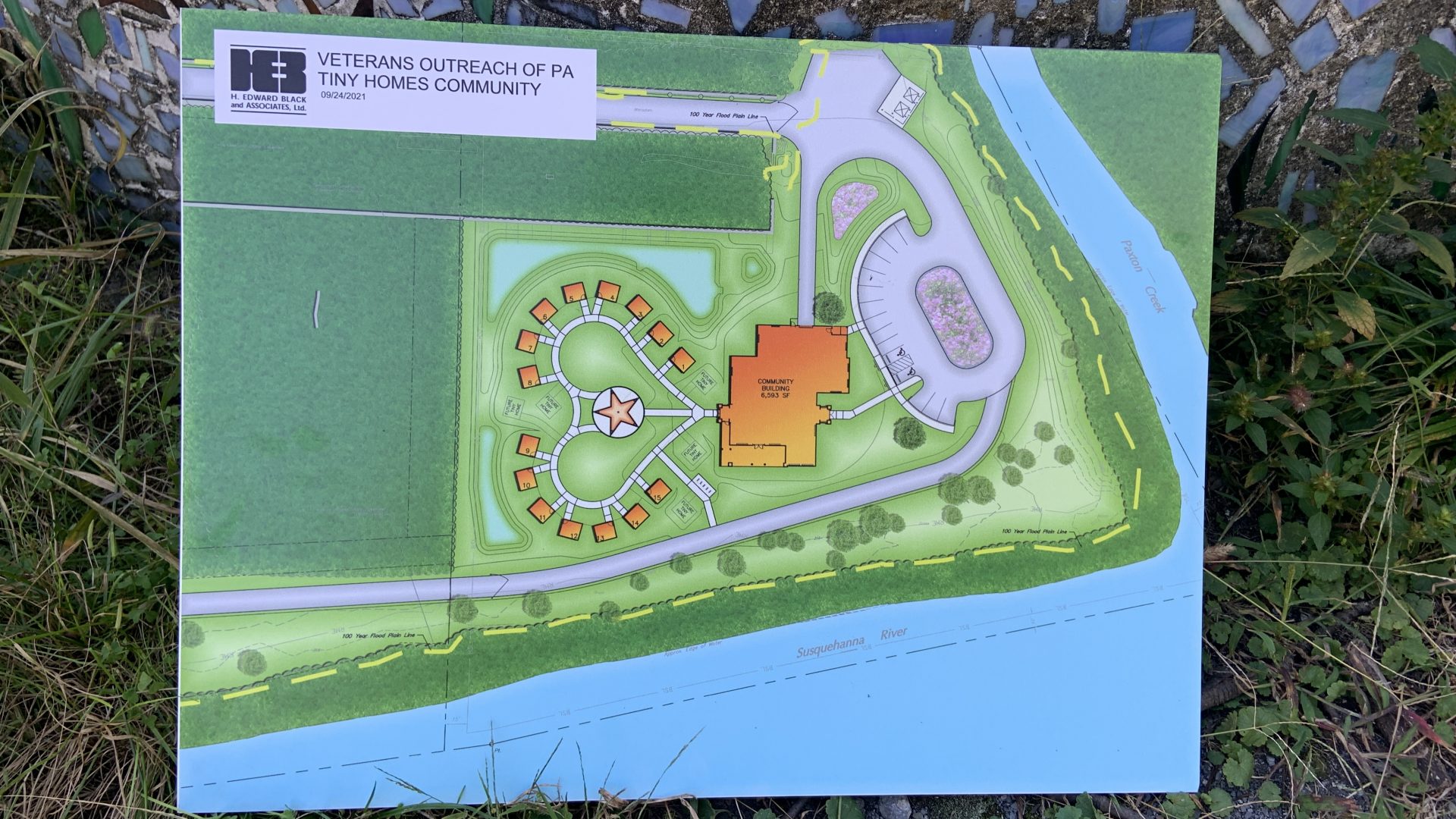 Diagram for plan to build 15 "tiny homes" and a community center to be built south of PennDOT building in Harrisburg.

(Harrisburg) — Organizers of a tiny homes project designed to help homeless veterans regain their footing in civilian society — literally one step and one room at a time — have taken title to the donated ground for their project.

That sets the stage for the launch of the public phase of an ongoing capital campaign, as they press forward toward a hoped-for groundbreaking next year.

Veterans Outreach of Pennsylvania, a nonprofit founded by local businessman Tom Zimmerman, hopes to build the 15-unit village on a five-acre vacant lot in South Harrisburg, just north of the Paxton Creek’s confluence with the Susquehanna River. The ground was donated by Harrisburg civic leader Peggy Grove, and was formerly part of the footprint of the long-defunct Phoenix Steel Corp.

The main source of traffic to the site now are users of the Capital Area Greenbelt trail, which skirts through the Grove property but will be detoured around the Veterans Outreach project once its construction starts.

On Monday, local organizers led reporters on a walk around the site with Chris Stout, who has won national acclaim as the founder of one of the original tiny home projects for veterans in Kansas City, Mo.

“I think the most important thing to note is it’s housing with dignity,” Stout said of the proposed Harrisburg project.

The 15 detached houses, to be scattered around the site in a heart-shaped pattern, would contain the basic necessities — a sleeping area, a half bath, a desk, a small sitting space – and be combined with a larger, staffed community center with meeting spaces, a kitchen and dining area, a laundry, private showers and other amenities.

Stout said the two go hand-in hand, as the community center and its activities offer veterans a chance to re-enter group and community settings, while the privacy of the single-person homes – which planners say will be outfitted with laptops and televisions – gives them a chance to have privacy and receive personal counseling or therapy as needed.

“We’re creating a model that is specific to each veteran and their needs, to help them get out of homelessness and back into society, and be sustainable,” Zimmerman said, noting that depending on the individual, that might mean attacking a substance abuse problem, post traumatic stress, or some combination of both.

There’s also, both men said, the security of having a place to call your own at the end of the day.

Stout sees the tiny homes concept as having great possibilities for all kinds of at-need populations, like youth who are aging out of foster parenting programs or single mothers trying to establish new households for themselves and their baby. But he’s really pleased to see the concept getting an initial trial for veterans in Harrisburg.

“With a low case management ratio, they (staff) are able to manage the person as a person, and not expect them to fit into some cookie-cutter approach,” Stout said. “With the tiny homes approach, everybody gets their own boxes to check. It’s not the same boxes across the board.”

Zimmerman said the need is there.

According to the latest 10-year survey of the homeless in Harrisburg and Dauphin County conducted by the Capital Area Coalition on Homelessness, there are more than 40 homeless veterans in the region on any given night.

Veterans Outreach sees itself working with existing programs that help veterans with emergency shelter needs, or in larger shelter or dormitory settings as a way to try to broaden the types of services available so that each person can find the resource that might work best for them.

The group is especially pleased with its Harrisburg site because, while it offers riverside seclusion to its future residents, it is also a relatively short walk to the Pennsylvania Department of Transportation’s Riverview Office Center which is served by regular bus runs into downtown Harrisburg.

Tenants to the tiny homes village will be invited to apply upon referrals from other homeless and human services organizations, with priority going to those people deemed the most vulnerable.

Once in the program, Zimmerman said, each veteran will be permitted to stay in the complex rent-free for as long as is needed to make that transition to more permanent housing. The only requirement he said, is that they comply with basic community rules and continue to make progress on their goals.

The next big challenges, he said, are completing necessary permitting and finishing drive to raise the estimated $3.5 million needed to complete a good access road and bring other public utilities to the property, and clear the ground for redevelopment and complete the proposed community center.

Organizers declined Monday to disclose their fundraising total thus far, but said more information will be coming this fall.

Zimmerman, the son of a World War II veteran, said his interest in veterans issues was sparked five years ago upon his Dad’s death, as he pondered the special care given to the burial of the military dead at the same time that so many veterans are struggling with the basic fundamentals of daily life.

That interest led to a call to action a few years later, when an old high school classmate posted a news clip about a similar tiny homes project for homeless veterans in Racine, Wis. “I just wrote back, I said: ‘We need one of these in Central Pennsylvania.’ And she says, ‘I’m in if you’re in,’ and that’s how Veterans Outreach of Pennsylvania got started.

“So I’m not reinventing the wheel. I’m just using what’s out there and bringing it to Central Pa.”