President Biden and U.N. Ambassador Linda Thomas-Greenfield talk to world leaders during a virtual summit on the pandemic.

The U.S. is donating more COVID vaccines and wants other rich nations to pitch in 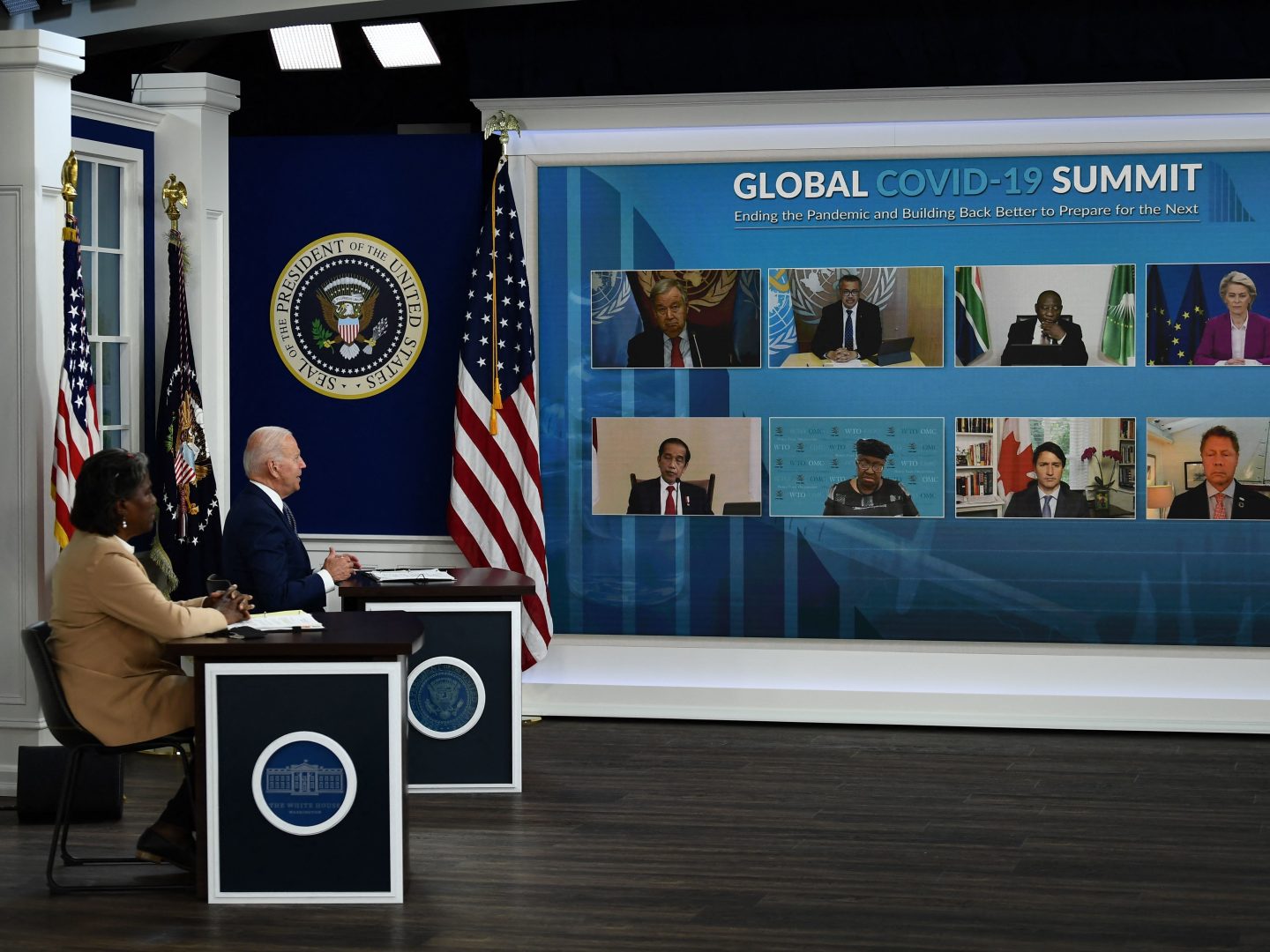 President Biden and U.N. Ambassador Linda Thomas-Greenfield talk to world leaders during a virtual summit on the pandemic.

President Biden called on rich nations and philanthropists to do more to end the COVID pandemic, saying the United States will buy 500 million more doses of the Pfizer-BioNTech vaccine to donate to countries around the world for delivery by next September.

The White House says the goal is to vaccinate 70% of the world’s population for COVID-19 by this time next year.

“We’re not going to solve this crisis with half-measures or middle-of-the-road ambitions. We need to go big,” Biden said at a virtual summit.

Biden convened the summit to coincide with the U.N. General Assembly in New York, a meeting that has been scaled back because of the risks of spreading COVID. During a portion of the summit open to the press, Biden sat on a stage set built to look like an office as eight world leaders looked back at him from a giant screen.

Dose of reality by @CyrilRamaphosa on current status. Need more aggressive actions – we haven't even met the 10% target.

It’s a big donation, but more doses are needed

Biden’s pledge will bring the total promised U.S. vaccine donations to more than 1.1 billion. So far, the U.S. has so far shipped almost 160 million doses to 100 countries around the world, a number that exceeds all other donations combined, a U.S. official told reporters ahead of the summit.

But to reach the 70% goal, about 5 billion more doses need to be donated to low- and middle-income countries, said Carolyn Reynolds, co-founder of the Pandemic Action Network. That means the U.S. pledges account for about one-fifth of the global need.

“The challenge now is timing and delivery,” Reynolds said. While there should be enough supply to meet the 70% global target by next year, more work is needed to get shots in arms much faster, Reynolds said. 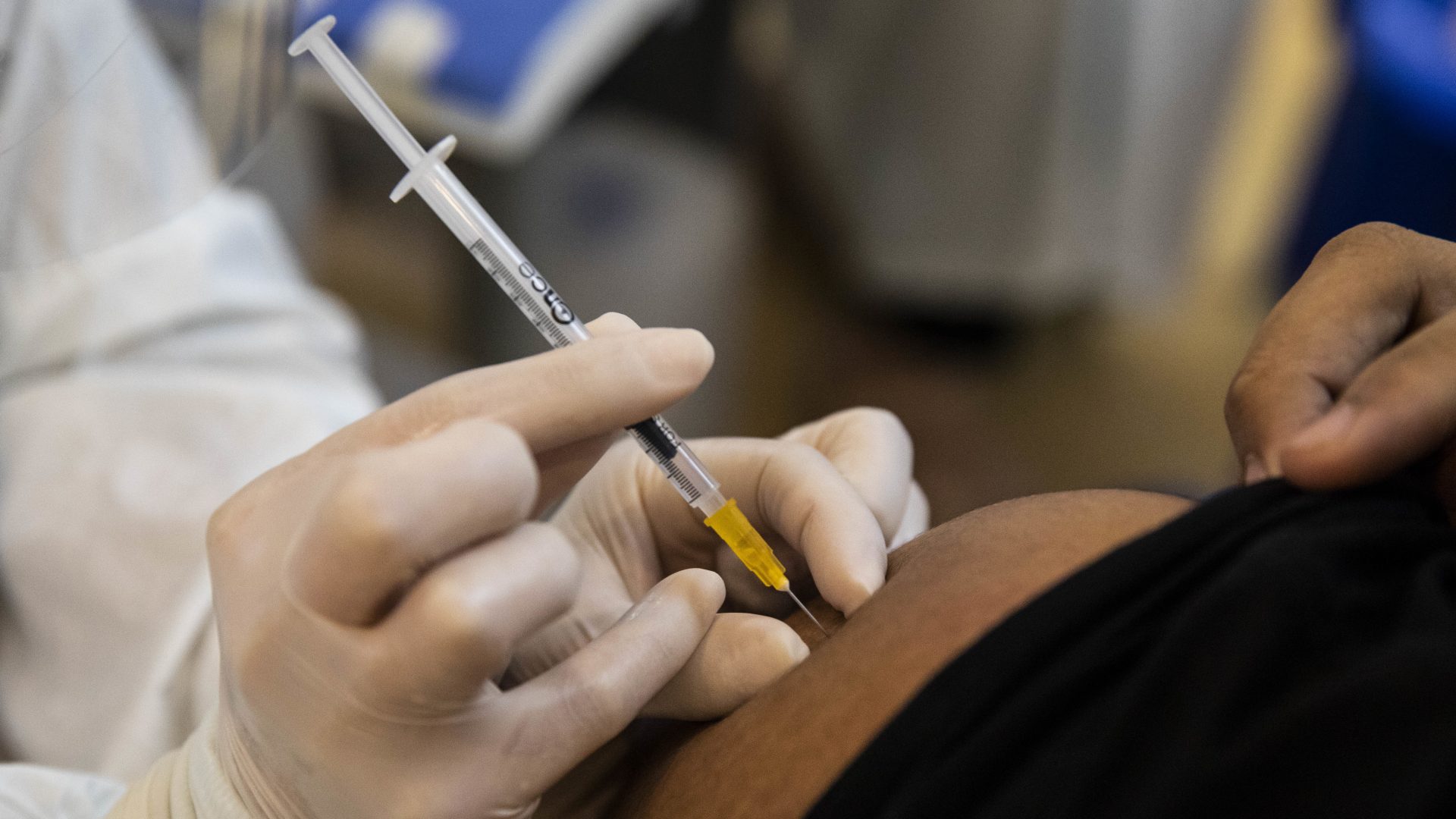 A Thai teenager receives a first dose of the Pfizer-BioNTech COVID-19 vaccine Tuesday in Bangkok. President Biden is set to announce on Wednesday that the U.S. is buying 500 million more doses of the Pfizer vaccine to donate to other countries.

‘A moral indictment of the state of our world’

One of the leaders looking back at Biden was United Nations Secretary-General António Guterres. On Tuesday, Guterres excoriated world leaders for the “lack of political will, selfishness and mistrust” that has created the chasm between rich and poor nations in combatting the pandemic.

“A majority of the wealthier world vaccinated. Over 90% of Africans still waiting for their first dose. This is a moral indictment of the state of our world. It is an obscenity,” Guterres said in his opening speech to the U.N. on Tuesday.

The United States and other wealthy countries have poured resources into plans to offer booster shots to fully vaccinated people, even as vast swaths of the world have yet to receive a single shot, prompting pleas from the World Health Organization and others to do more to slow the spread globally.

Biden defended the U.S. response, saying his first responsibility was to make sure Americans were protected, and arguing that the U.S. donations have been generous. “For every one shot we’ve administered to date in America, we have now committed to do three shots to the rest of the world,” Biden said.

The new tranche of Pfizer doses will be manufactured in U.S. plants and will be bought at a “not-for-profit” price, the officials said. Most U.S. vaccine shipments — 800 million doses — will ship between January and September 2022.

More than vaccines are needed

The White House did not provide a list of speakers and participants in the summit, which was closed to press except for speeches from Biden and Vice President Harris. But advocates invited to the event provided some details of what was happening on social media.

#COVIDSummit #SamanthaPower starts+ends with the Mall tribute to the US citizens that lost their lives to #COVID19, talks about the importance of saving lives now around the world @rajshah head of @RockefellerFdn announces investment of $1bn to unlock the power of partnerships

The White House set specific targets for vaccines, as well as donations of oxygen, tests, therapeutics and protective gear to parts of the world that need it — and will work on a health security financing mechanism so that the world is more prepared for future pandemics.

The Biden administration is also investing in vaccine manufacturing plans in Africa and in India that together will be able to produce 2 billion doses by 2022, the White House said.

Biden called on other countries to donate — not sell — doses, and said there would be follow-up sessions later this year and early next year to check progress.

Is the worst over? Modelers predict a steady decline in COVID cases through March