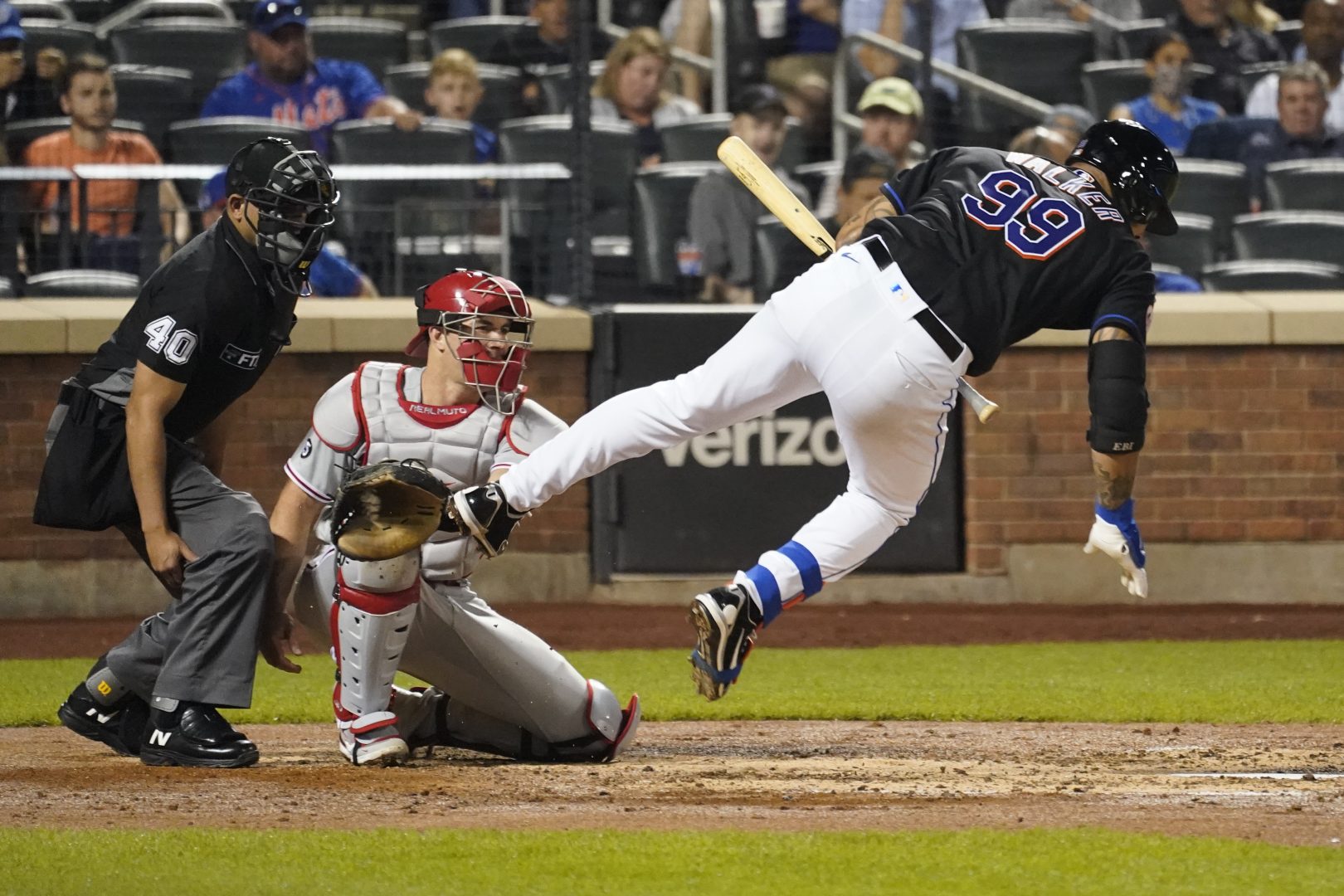 With a chance at an October splash still in play, the star-driven Phillies leaned on their depth Friday night.

Wheeler limited the damage in a short but effective outing against his old team, Miller hit a tiebreaking homer and Philadelphia held off the New York Mets 4-3 in a series opener between teams clinging to postseason aspirations.

The Phillies moved within two games of NL East leader Atlanta and remained 2 1/2 behind St. Louis for the second NL wild card, with San Diego and Cincinnati also in the way.

The third-place Mets lost their fourth straight and remained 5 1/2 games behind the Braves with 14 to play.

Miller put the Phillies ahead 2-1 in the fifth with a solo shot, his 19th homer of the season. Freddy Galvis and Matt Vierling had sacrifice flies, and Didi Gregorius padded the lead with a late RBI double. Harper was 1 for 4 with a double a night after homering and driving in four in a wild 17-8 win over the Chicago Cubs.

“I feel like we’re scratching and clawing,” Miller said.

Philadelphia’s bullpen — which leads the majors with 32 blown saves — nearly gave up Wheeler’s lead. Archie Bradley allowed two runs in the eighth on doubles by Francisco Lindor, Michael Conforto and Kevin Pillar before Ian Kennedy took over and got the last out of the inning.

Kennedy also pitched a 1-2-3 ninth for his 23rd save of the season, including seven since a deadline trade from Texas. Brandon Nimmo flied out to the warning track in left-center for the final out, and the Mets (72-76) dropped to 2-15 in their last 17 one-run games.

“We’re not mathematically out,” Nimmo said. “Crazy things have happened in the past. They’ve made movies about it. It can happen.”

Wheeler (14-9) allowed a run and struck out six over five-plus innings, walking one and plunking two on 93 pitches. The Cy Young hopeful inched his ERA down to 2.83, stretched his league-leading punchout total to 231 and reached 200 innings in a season for the first time.

“That’s just being consistent, throwing strikes,” Wheeler said. “When you kind of look back at it that way, feels like it kind of paid off.”

Gregorius made a dazzling defensive gem at shortstop in the seventh, diving to his right for Jonathan Villar’s grounder and — from his stomach — flipping the ball 30 feet behind his back to second for a forceout.

Girardi was ejected in the seventh after third base umpire Carlos Torres ruled that Philadelphia’s Matt Joyce failed to check his swing. Girardi began to argue from the dugout and raised an arm while he did. He said Torres used that as justification to run him.

“I sure as heck shouldn’t be tossed for putting my hand up,” Girardi said. “I mean, if I put my hand up and put four fingers down, that’s a different story.”

Taijuan Walker (7-10) pitched two-run ball over five innings for New York, allowing three hits and striking out three. He was lifted after 88 pitches, a sign the Mets might be curtailing his workload down the stretch after injuries and the pandemic limited the 29-year-old All-Star to 67 1/3 innings from 2018-20.

“I don’t make the call, that’s on them and it is what it is,” Walker said, adding, “I really felt like they should’ve given me the chance to go back out there for the sixth.”

The 31-year-old Wheeler left the Mets for the rival Phillies on a $118 million, five-year free-agent deal prior to the 2020 season and has mostly tormented New York since. He improved to 4-1 with a 2.62 ERA in nine starts against his former club.

Wheeler threw a shutout against the Mets in their previous meeting Aug. 8 and entered with 22 consecutive scoreless innings against them — most by a pitcher versus his former team since Doyle Alexander’s 26-inning run against Baltimore from 1986-88.

Wheeler’s streak ended with one out in the fourth, when Javier Báez blooped a bases-loaded single to right that tied the game at 1.

The right-hander was pulled with no outs in the sixth after singles by Lindor and Pete Alonso. José Alvarado relieved and escaped to preserve a 2-1 lead.

“Wheels has picked us up all year long,” Girardi said. “He’s been unbelievable for us. To be able to pick him up for a change is nice.”

Phillies: C J.T. Realmuto was back in the lineup a day after being hit in the left elbow by a pitch. X-rays were negative.

Mets: Nimmo (right hamstring strain) was activated from the injured list and batted second. … RHP Jacob deGrom (forearm tightness) felt good after a bullpen this week and plans to throw another one this weekend. … RHP Noah Syndergaard (Tommy John surgery) will either face hitters at Citi Field or on a minor league rehab assignment this weekend. … LHP Thomas Szapucki was recalled from Triple-A Syracuse and placed on the 60-day injured list due to ulnar nerve transposition surgery. … RHP Jake Reed was optioned to Triple-A Syracuse. … RHP Jordan Yamamoto (right shoulder discomfort) was reinstated from the 60-day injured list and optioned to Triple-A.