FILE PHOTO: A child climbs the stairs of a bus before the first day of school on Monday, Aug. 3, 2020, in Dallas, Ga.

State officials are pushing back, but it’s not clear how far they will go to get districts to enforce the masking requirement

Thousands of students have requested to go mask-free in Pennsylvania schools, claiming a medical exemption amid fierce local opposition to the state’s new face-covering mandate.

The order, which went into effect Sept. 7 and applies to all K-12 schools and child care facilities in Pennsylvania, requires students, staff and visitors to wear masks inside school buildings, regardless of vaccination status. But an apparent loophole has made it easier for parents in some districts to request medical exemptions for their children. Those districts are using exemption forms that require nothing more than a parent’s signature.

State officials are pushing back, but it’s not clear how far they will go to get districts to enforce the masking requirement more stringently. At least two lawsuits are seeking to get the mandate overturned.

In a Sept. 10 communication to all 500 Pennsylvania school districts, the Education Department asserted that “any school entity simply permitting a parent’s sign-off without evidence that the student has a medical or mental health condition … is not in compliance with the order.” It said districts should determine eligibility in accordance with federal disability laws, and request medical documentation as they normally would.

Some school district officials counter that if the Wolf administration had wanted to require a doctor’s endorsement, it should have done so in the masking order itself.

Richard Mextorf, superintendent of the Hamburg Area School District, said the state put local officials in a bind by abruptly reversing course on masking, promising local control before issuing a statewide mandate after many schools were already back in session.

“It’s pretty difficult when a school board says, ‘We’re going to make masks optional for kids,’ and then school starts and then the mandate comes. I think it would have been a lot cleaner if we had a mandate before school started,” he said. “All of the sudden it changed, and I think it just made people angry. … I think it’s been handled about as backwards as it can possibly be handled.”

Hamburg’s board opted to let parents sign off on masking exemptions without a doctor’s note, and 674 students, about 30% of the population, have requested them, according to the superintendent. 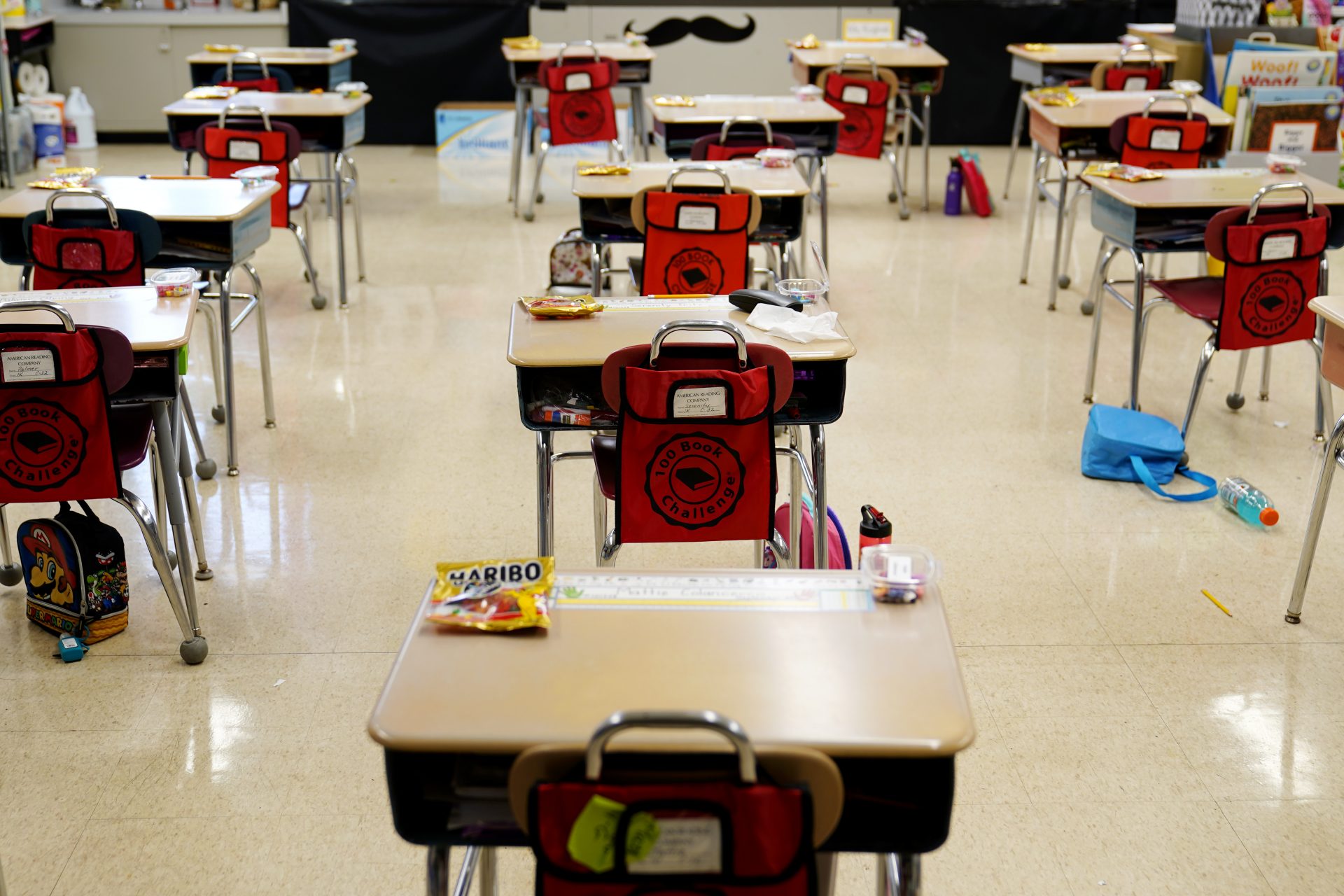 Desks are arranged in a classroom at Panther Valley Elementary School, Thursday, March 11, 2021, in Nesquehoning, Pa.

Elsewhere, the percentage of students seeking exemptions are lower. Central Bucks School District outside Philadelphia — one of the state’s largest — said it has received more than 1,100 exemption requests, representing more than 5% of the student population. A spokesperson said Friday that each of those students will have to be evaluated for a disability before an exemption is approved.

In the Quakertown Community School District, also in the Philadelphia area, 330 students, or 7% of the student body, have requested exemptions, which were granted so long as the form was properly completed and turned in, a spokesperson said. In Blue Mountain School District, which neighbors Hamburg, 159 students, or more than 6% of the student body, have sought permission to go mask-free, the district said.

Some districts that had previously accepted a parent’s signature as proof of medical necessity will no longer do as as result of the Education Department’s Sept. 10 warning.

Laurel School District, in Lawrence County, said that students who were previously granted an exemption would have to secure a doctor’s excuse — or start wearing a mask on Oct. 1.

“The state has now upped the ante, if you will,” Laurel’s superintendent, Leonard Rich, said in a video message to parents and students. “This is why we’re doing what we’re doing.”

Timothy Gilsbach, solicitor for several school districts in the Philadelphia area, said that while the masking order does not explicitly require a doctor’s note, it uses a legal term — “reasonable accommodations” — that indicates the state expects districts to carefully evaluate all such requests, and not grant exemptions on a parent’s say-so.

“That phrase keys us into the idea that there’s a conversation to be had. That’s not just someone saying, ‘I need it,'” he said. “I think part of the real struggle for school districts is that a lot of kids asking for exemptions wore masks without any issue last year.”

Some parents who oppose masks contend they make it hard for their children to breathe and are tantamount to child abuse. Dozens of Pennsylvania organizations — including those in pediatrics, public health, and child abuse prevention and treatment — issued a rebuttal on Friday.

“Such claims brazenly diminish the harsh reality of child abuse and demonstrate a callous disregard for the lifelong physical, emotional and economic impact of child abuse,” said the statement, released by the Center for Children’s Justice in Bernville. “In point of fact, there is NO similarity between face coverings and actions that interfere with a child’s airway.”

There is no scientific evidence to show that masks are harmful to children’s health.

Democratic Gov. Tom Wolf has said a universal, statewide order was necessary after most Pennsylvania school districts did not impose their own mask mandates, and the delta variant of the coronavirus caused a statewide surge in COVID-19 cases, hospitalizations and deaths.

Far more school-age children in Pennsylvania are testing positive for the virus now. The state Health Department reported more than 7,200 infections in children aged 5 to 18 over the past week — more than 11 times the number testing positive in the same period a year ago.