“Garcia is a private paramilitary prison contractor who trains corrections officers to view incarcerated people as ‘the enemy’ and to ‘go to battle with them,’” said Jonas Caballero, a paralegal with the Abolitionist Law Center.

The contractor has also consulted at York County Prison

“Garcia is a private paramilitary prison contractor who trains corrections officers to view incarcerated people as ‘the enemy’ and to ‘go to battle with them,’” said Jonas Caballero, a paralegal with the Abolitionist Law Center.

(Pittsburgh) — Half a dozen community groups called on members of the Allegheny County Jail Oversight Board to cancel a training contract at the jail Wednesday.

At a press conference outside the City-County Building, organizers criticized the company hired to provide the training, saying its methods defy a spring referendum which banned certain practices at the jail.

The training, provided by Corrections Special Application Unit (C-SAU), arms corrections officers with rubber projectiles to use when an inmate refuses to exit their cell. Warden Orlando Harper has argued those tactics are necessary to replace leg shackles, restraint chairs and pepper spray banned by voters this spring.

Voters overwhelmingly passed an ordinance that also bans many uses of solitary confinement. The jail is currently working to bring its policies into compliance with the referendum by December.

Harper and Stephen Pilarski, an Allegheny County deputy manager, argued at an oversight board meeting earlier this month that C-SAU was the only company that teaches tactics which don’t violate the referendum. But activists who spoke Wednesday were unconvinced.

“You can’t possibly care about protecting the individuals incarcerated when you choose to answer the removal of weapons and torture with more weapons and torture,” said Kyna James, a coalition organizer with the Alliance for Police Accountability.

The Alliance for Police Accountability led the campaign in support of the referendum, which James said “was put in place to drastically decrease the use of excessive force within the walls of the ACJ.”

Other groups present for the press conference included: the Abolitionist Law Center, 1Hood Media, the Bukit Bail Fund of Pittsburgh, Jailbreak PGH, the Black Political Empowerment Project and Pittsburgh Feminists for Intersectionality. Also speaking at the event were people with first-hand experiences of life behind the jail’s walls.

“The people that are being placed in a position of power to be responsible for the safety of all inmates are the same people that are … encouraging violence in the jail,” said Kimberly Andrews, who’d been incarcerated at the facility.

Andrews is suing the jail for excessive force.

At the center of the dispute is C-SAU’s senior trainer, Joseph Garcia. 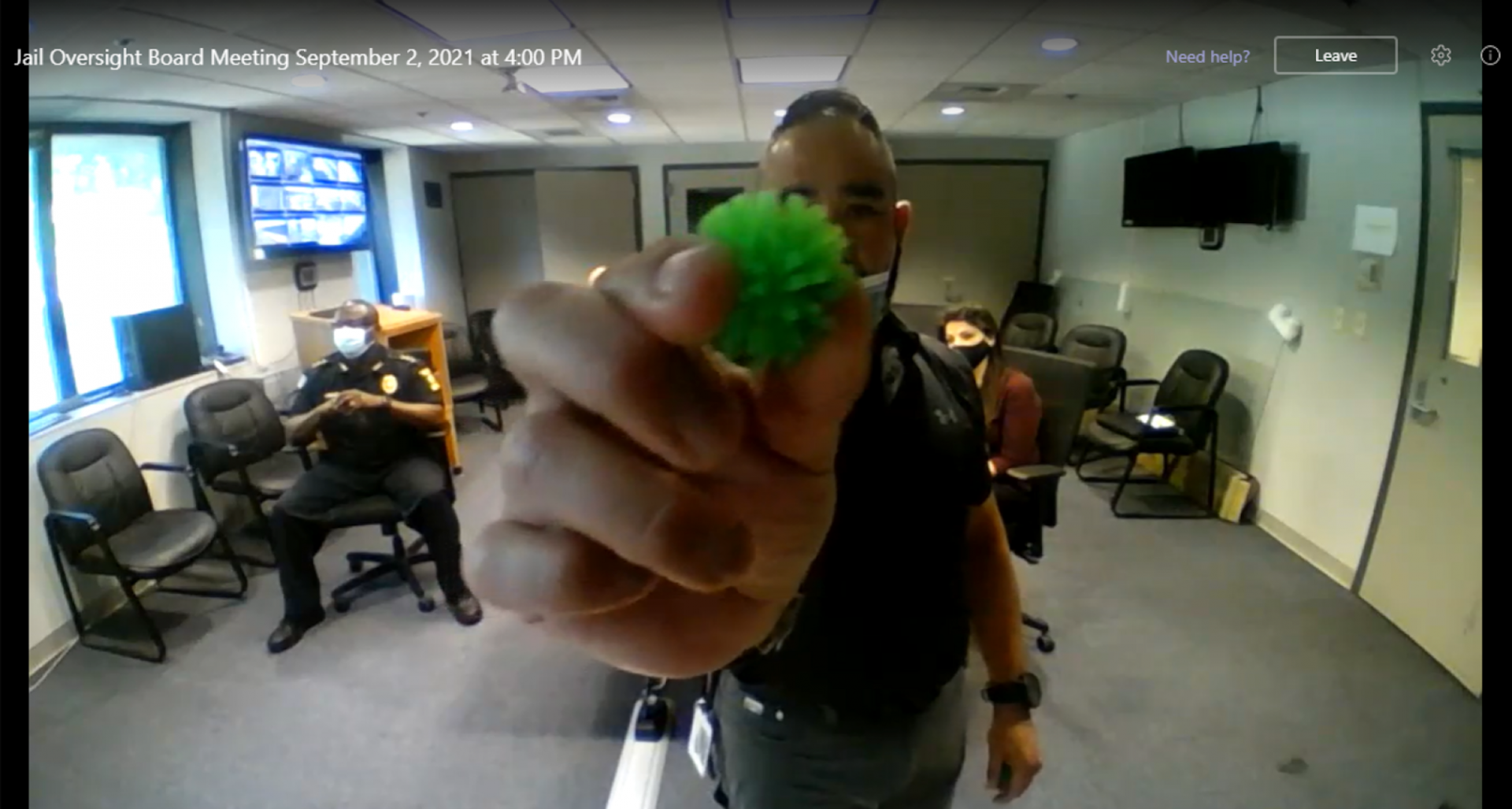 During the regular September meeting of the Allegheny County Jail Oversight Board, C-SAU’s Joseph Garcia displays a rubber star used by corrections officers to gain compliance from inmates during cell extractions.

“I am sticking professionally, with my professional resume. Thank you very much,” he said in response to questions.

But he did address a controversy at a South Carolina jail where C-SAU provided training, and where an inmate died in January during a cell extraction. Garcia argued that neither officer involved in the death was certified by C-SAU, and that the company cooperated with the investigation.

But a report from the local prosecutor’s office claims Garcia refused to submit training materials that were requested by investigators. A use-of-force analysis describes footage of Garcia’s training as “ridiculous” and “excessive.”

Charges were not filed against any corrections officers in the death.

“Garcia is a private paramilitary prison contractor who trains corrections officers to view incarcerated people as ‘the enemy’ and to ‘go to battle with them,’” said Jonas Caballero, a paralegal with the Abolitionist Law Center. The group is suing the jail over its use of force and has also threatened a lawsuit in connection with the C-SAU contract.

It is also circulating a letter to demand the oversight board ban Garcia and C-SAU from the facility. The letter additionally seeks to reverse the purchase of Kel-Tech shotguns used to fire the rubber projectiles.

Caballero criticized comments Garcia made on the podcast Talking Lead in 2020. During the nearly two-hour conversation, Garcia disparages the “liberal media” the Black Lives Matter movement and LGBTQ rights advocates.

Stephen Pilarski, Allegheny County deputy manager, has said that concerns about those comments were the result of misinformation by media outlets. But Caballero rejected that contention on Wednesday.

“This is not misinformation,” he said. “This is Garcia in his own words.”

A man who identified himself as MAN-E said he had been incarcerated at the prison. He said high bonds keep people who haven’t been convicted of a crime at the facility.

“We want our people who are — temporarily, mind you — in the ACJ to be treated as actual people,” he said. “Human beings who are living through potentially the worst moment of their lives that can only be made worse by these tactics and these weapons.”

Speakers encouraged the public to submit comments to the oversight board for its special meeting about the C-SAU contract scheduled for next Monday.

The oversight board moved to hold that session during their regular meeting earlier this month. The board voted 4 to 3 to allow the training to continue while board members arranged for a demonstration of C-SAU’s training.

Allegheny County Councilor Bethany Hallam, who serves on the oversight board, is in favor of stopping the training outright.

In a statement Wednesday, she called the contracts “a disturbing step for the jail administration that is already facing multiple lawsuits for excessive uses of force and solitary confinement,” and said the contracts could open up the county to more litigation in the future.

The meeting will take place Monday evening at 5:30 p.m. Members of the public may submit comments about C-SAU here until Sunday evening.

Philadelphia police assaulted her and kept her from her toddler for hours. Now they'll pay $2 million