Ellen Saracini touches a memorial plaque for her husband Victor that is illuminated by late afternoon sunlight. Victor, who piloted one of the doomed planes before being killed by terrorists, is one of 2,973 victims of the terror attacks remembered at the Garden of Reflection.

As the memory of 9/11 fades for some, the Garden of Reflection has become a place to teach children and a peaceful place for those grieving losses. 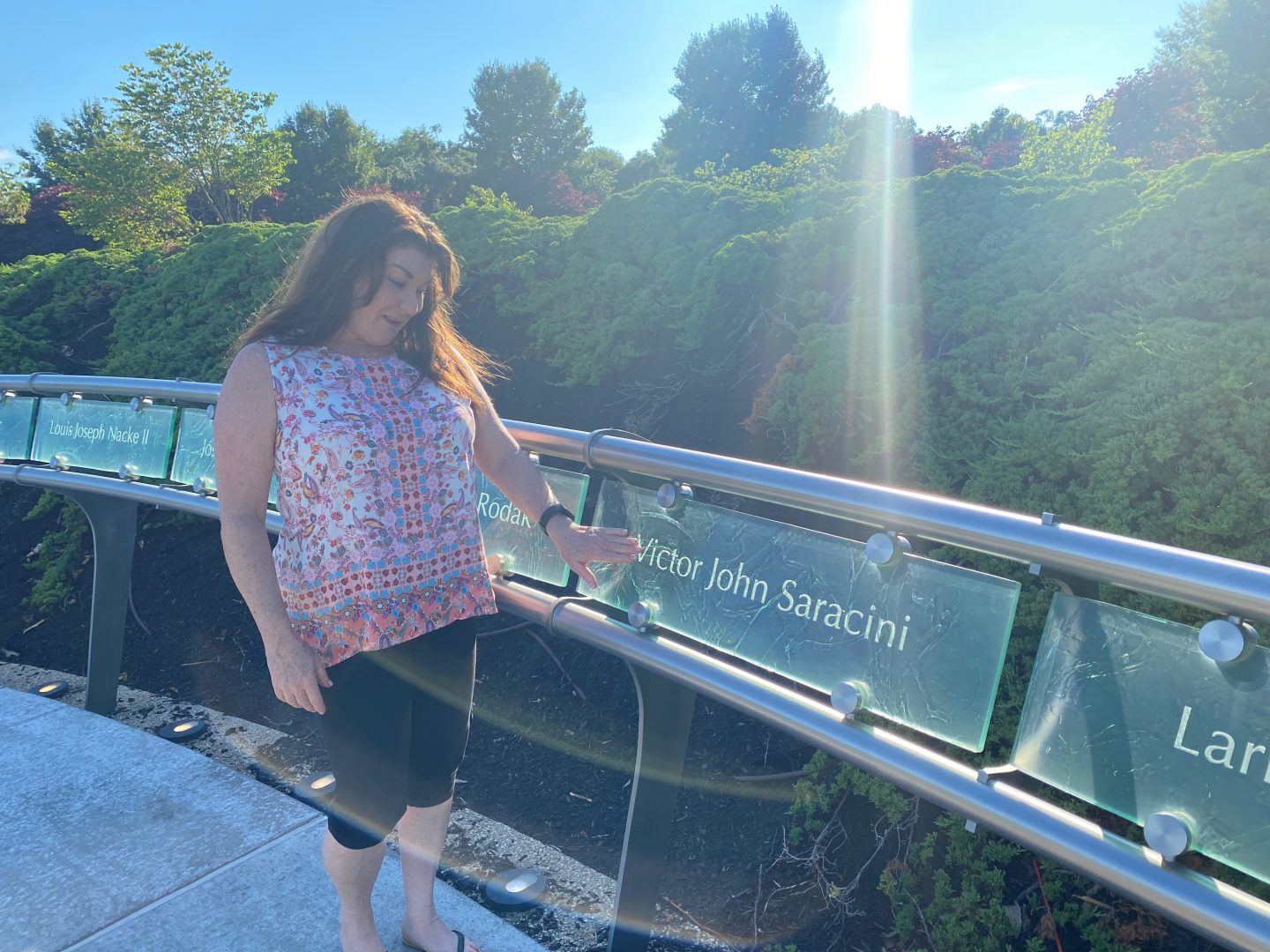 Ellen Saracini touches a memorial plaque for her husband Victor that is illuminated by late afternoon sunlight. Victor, who piloted one of the doomed planes before being killed by terrorists, is one of 2,973 victims of the terror attacks remembered at the Garden of Reflection.

(Lower Makefield Township) — For Ellen Saracini, every detail in the memorial she helped design has personal meaning, starting with the two pieces of steel from the wreckage of the World Trade Center.

“The taller one is pointed towards New York,” she explained during a recent visit to the memorial. “It is our introduction and representation of the destruction of September 11th. But it’s also our entrance into the garden of reflection.”

Saracini has been the driving force behind the Garden of Reflection 9/11 Memorial, in an Eastern Pennsylvania community that lost nine people in the terror attacks — more per capita, she noted, than anywhere else in the state. All told, 18 people from Bucks County died on September 11, 2001.

As the memory of that day begins to fade for some, the memorial has taken on a broader role: To help teach children, to remember lost loved ones, and to offer peace to anyone who seeks it.

Walking the path through the garden, Saracini pointed to trees and a bench that represent the 18 who were lost. She noted, New York City isn’t far from here — only about 90 minutes by train. In 2001, a lot of people who lived in the county commuted to jobs in and around the city.

One of them was her husband, Victor Saracini.

Victor was a United Airlines pilot, primarily based out of the John F. Kennedy and Newark Liberty International airports. But on Tuesday, September 11, 2001, he began his day in Boston — piloting Los Angeles-bound United Flight 175.

The jetliner was the second plane to hit the World Trade Center, eventually bringing down the south tower. Investigators concluded Victor and his co-pilot had already been killed by members of an al Qaeda terrorist cell. He was 51.

Ellen Saracini, also a trained commercial pilot, was watching the attack unfold on the news, telling herself it couldn’t be Victor’s plane.

Then, she heard a knock at the front door. It was a pilot she knew.

“He just walked through the door and I knew,” she said. “There was only one reason he would be coming to my house right then.” 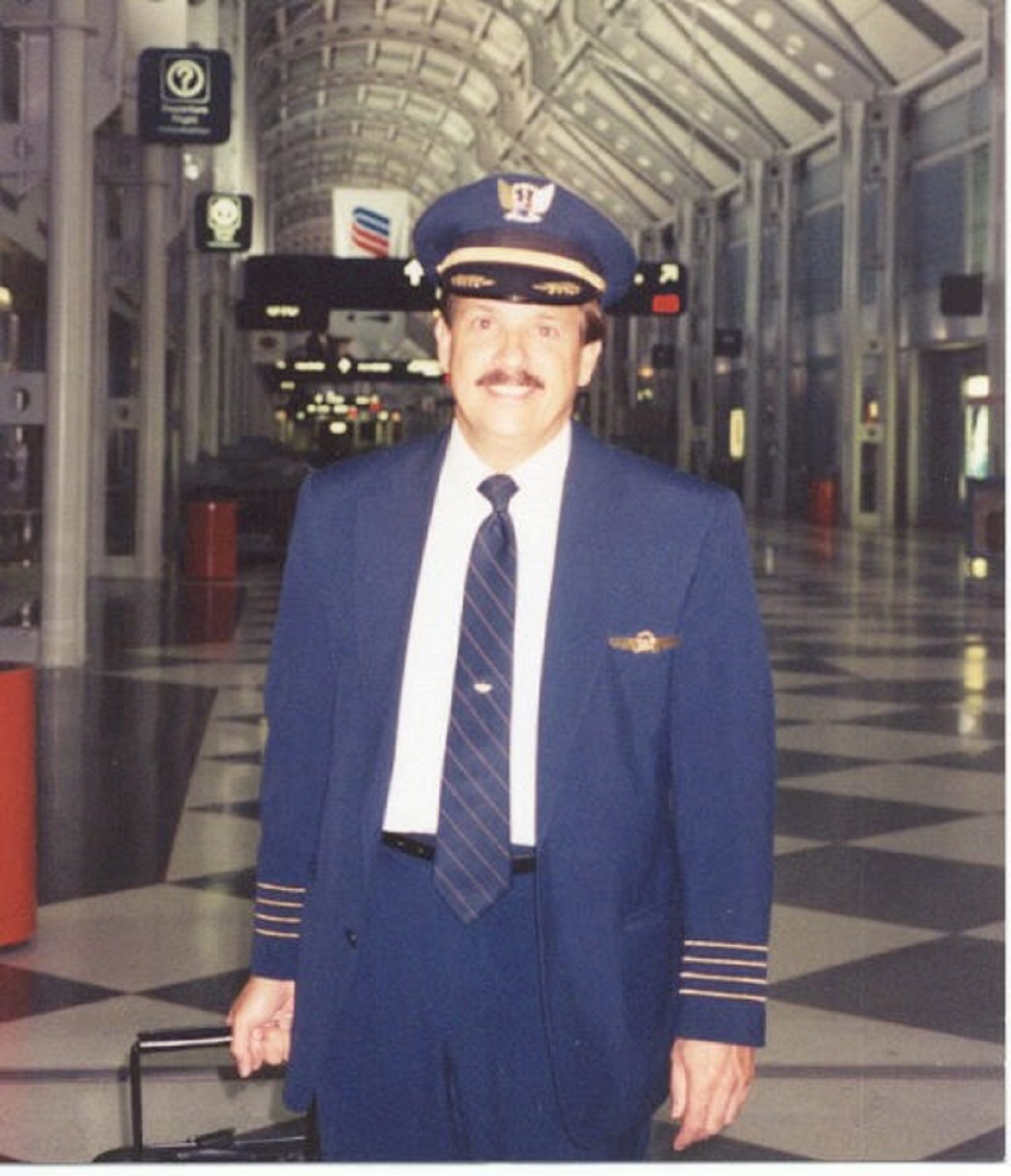 In this undated photo, United Airlines pilot Victor Saracini stands for a photo at Chicago O’Hare International Airport. Saracini died on Sept. 11 when terrorists hijacked his plane, United 175, killing him and crashing it into the south World Trade Center tower.

Now, Victor’s name is one of the 2,973 etched on glass panels at the garden, near a water fountain and reflecting pool.

“There are a lot of people who are family members who don’t have any remains,” she said. “There is no gravesite to go to. And so places as beautiful as this, that you can come to, come on a down day and just be here, or come on a happy day and be able to share it in a beautiful space is very important to me. And I see how important it is to our community.”

Building the memorial wasn’t easy, though. As Saracini threw herself into the process in the wake of the attacks and her husband’s death, one of her first tasks was securing land from the township. She also worked closely with Yardley-based architect Liuba Lashchyk to set the right tone.

Once it opened in 2006, the need for day-to-day maintenance began. Fundraising has been a constant necessity.

Dealing with these responsibilities was becoming a full-time job, so Saracini turned to her friend Eric Stark for help. In 2001, Stark was leading the United Way of Bucks County. Over the course of his outreach to families who had lost loved ones in the attack, he became one of Saracini’s closest partners on the project. 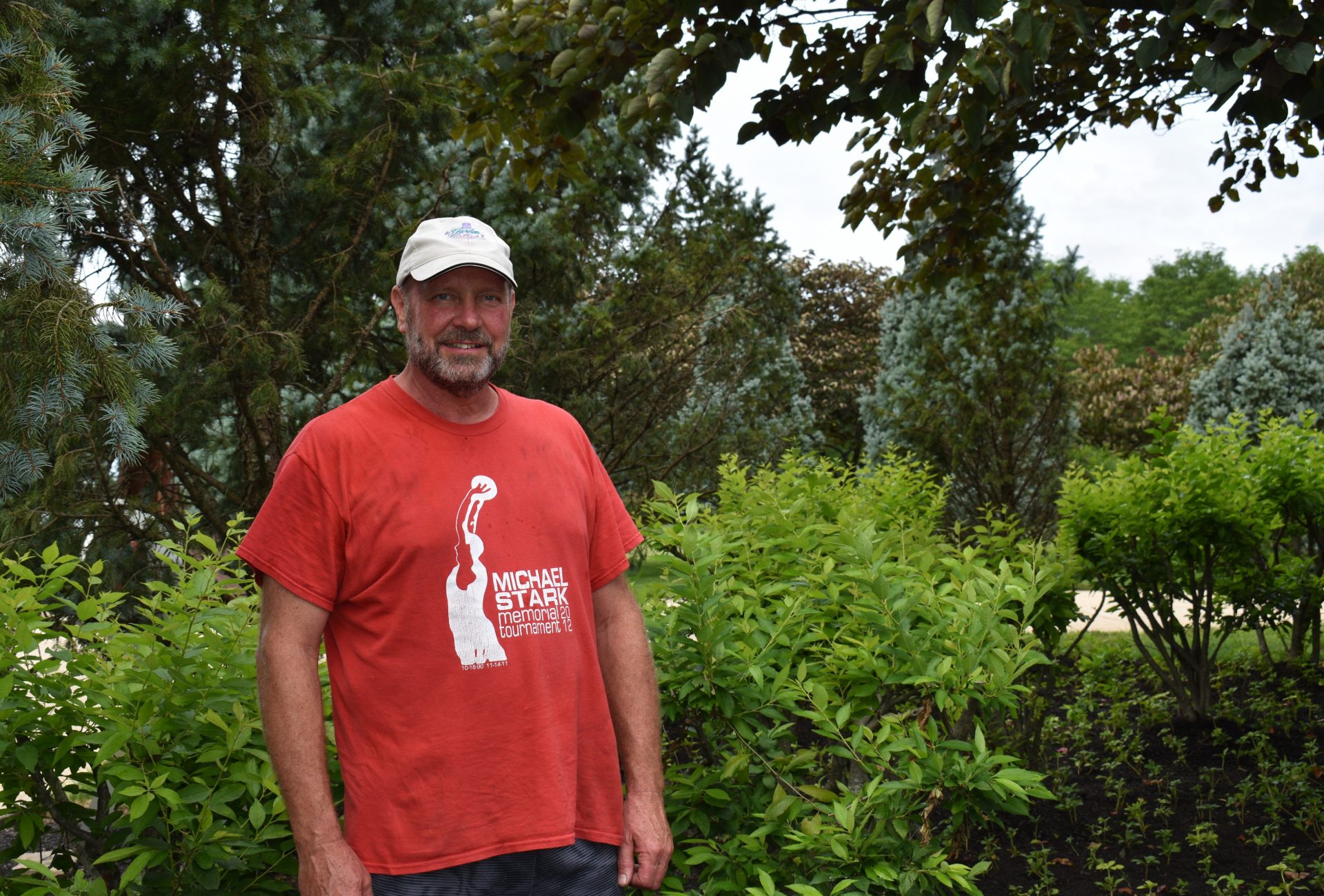 Eric Stark manages much of the day-to-day operations of the memorial. Stark didn’t lose anyone on Sept. 11. However, his two sons died, young and unexpectedly, in the years after the attacks. He says the memorial has become a refuge and a place where he thinks about his sons.

On a recent hot, summer day at the park, he was there, covered in dirt, working alongside volunteers from a high school to cut grass, spread mulch, and lay sprinklers to get the park in shape for the 20th anniversary.

Stark has spent the better part of the last two decades figuring out the nuts and bolts of preserving the park permanently. Now, he’s nearly finished raising a $2 million dollar endowment to care for the Garden of Reflection in perpetuity.

“It’s been a labor of love,” Stark said, “but a labor that’s necessary, especially with the anniversary coming up.”

It’s also a labor, he said, that has helped him during his own time of need. Stark suffered devastating losses in his own family over the last two decades. His two sons died, young and unexpectedly, nearly a decade apart.

For him, this place and the people who love it have become a refuge.

“During that time, and during my darkest times, some of the family members that I reached out to then reached out to me, and helped us through our tragedy,” he said. “I feel like I’ve gotten back 10 times what I gave to the families.” 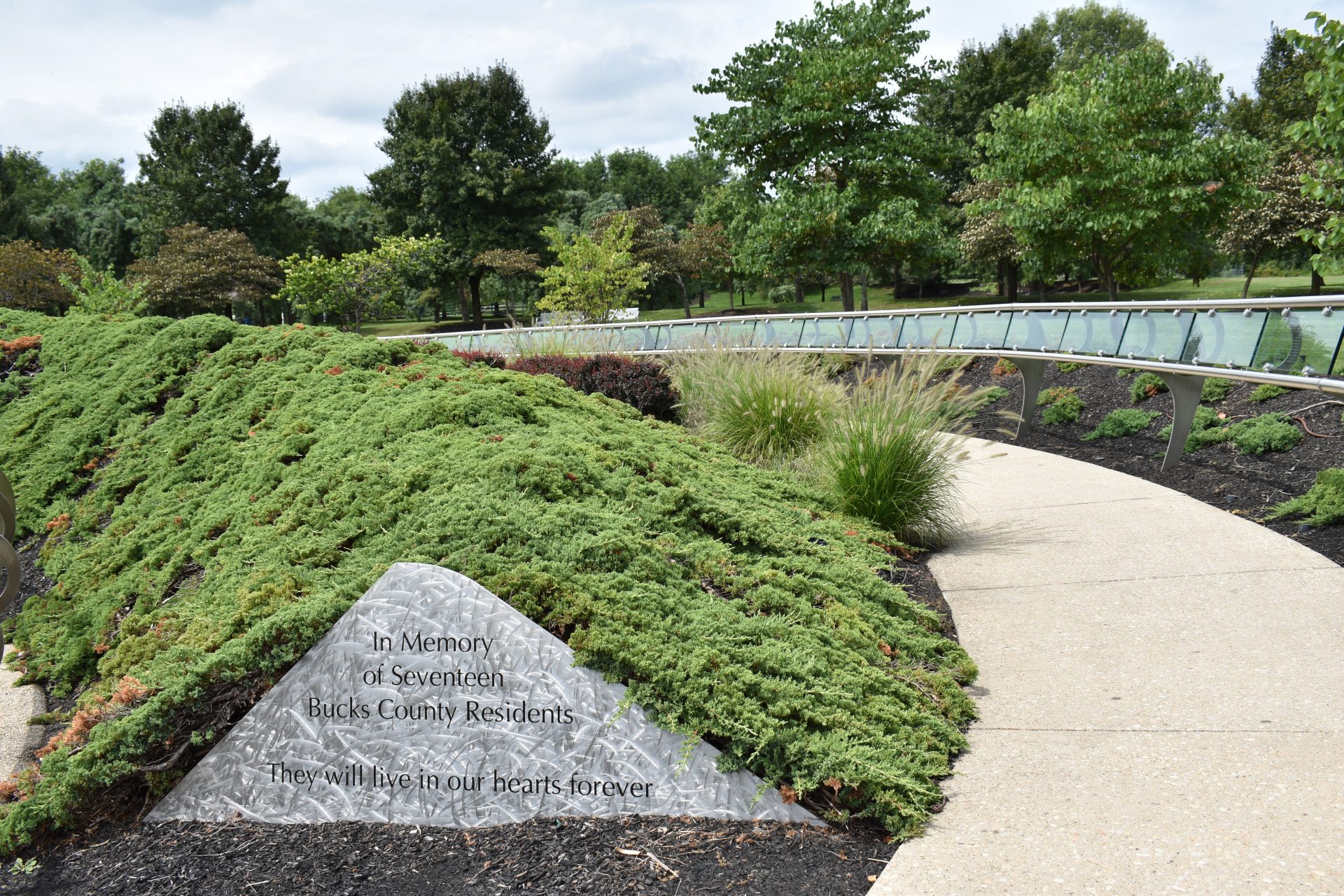 “It’s not designed to be sorrowful,” he said. “We believe that out of darkness comes light. And every representation here, even the fountains coming out of the void, shows new life coming out of that darkness.”

The memorial sits within a 62-acre park. Along with its benches and winding paths, there’s a playground, basketball court and volleyball nets. As Stark spread mulch on a humid August afternoon, several couples strolled around, often with children or dogs in tow. Two people played catch with a baseball. A father and son played basketball together.

Adam and Danielle Grzybek were among the families walking the paths. They explained that they bring their 8- and 6-year-old boys here all the time. The children raced ahead, shouting, on their scooters.

They’re still a little young to fully understand what happened on that day in September, Adam said, but, “We’ve been able to walk them over by the memorial and kind of tell them what it’s about.”

“And I think it’s a good place to spend time with your family and the people you love and hold dear to you,” Danielle added. “It’s a good reminder to cherish the time you have.” 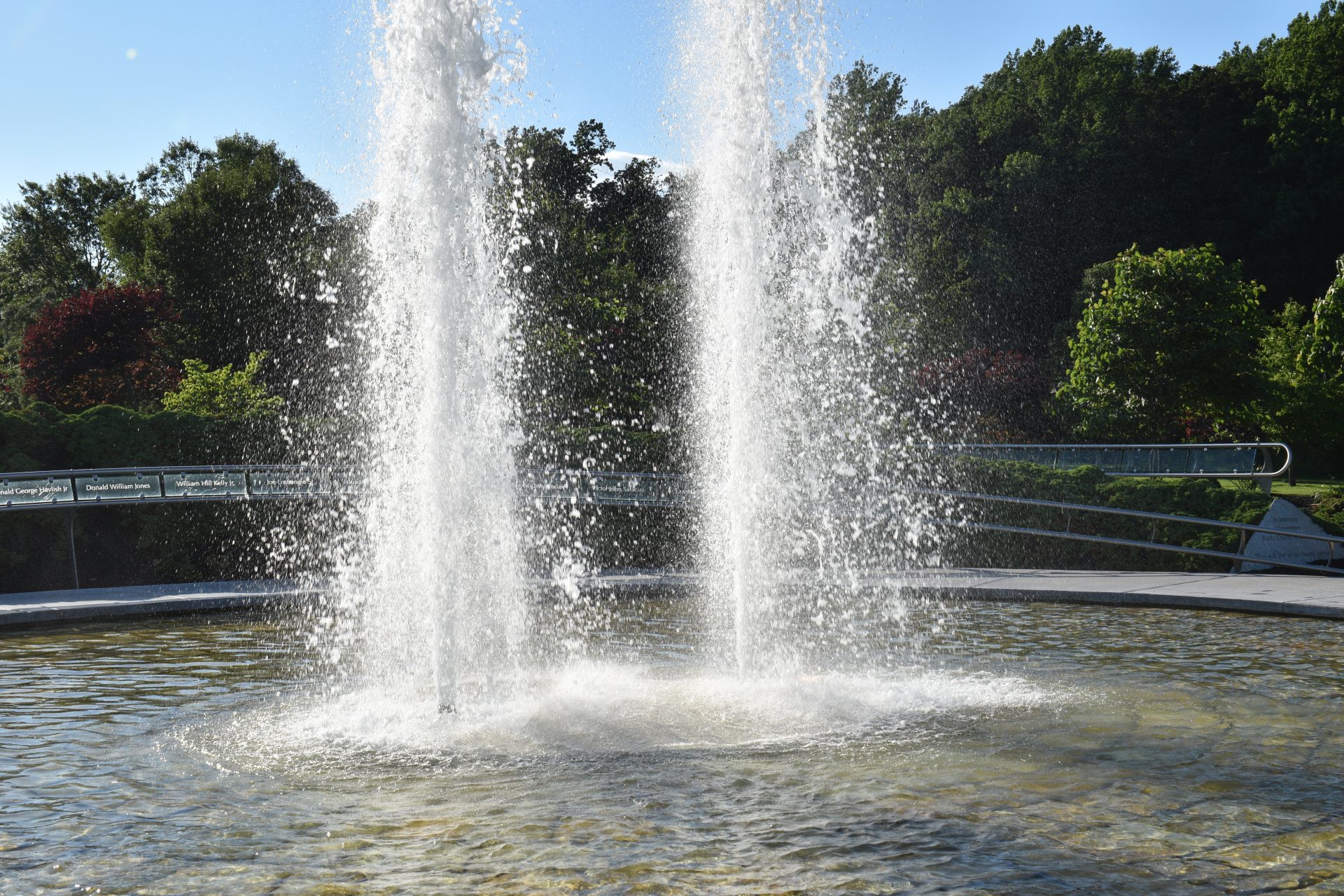 The reflecting pool is surrounded by memorial plaques with the names of those who died in the terror attacks.