New Orleans Police detective Alexander Reiter, looks over debris from a building that collapsed during Hurricane Ida in New Orleans, Monday, Aug. 30, 2021. Hurricane Ida knocked out power to all of New Orleans and inundated coastal Louisiana communities on a deadly path through the Gulf Coast that is still unfolding and promises more destruction. 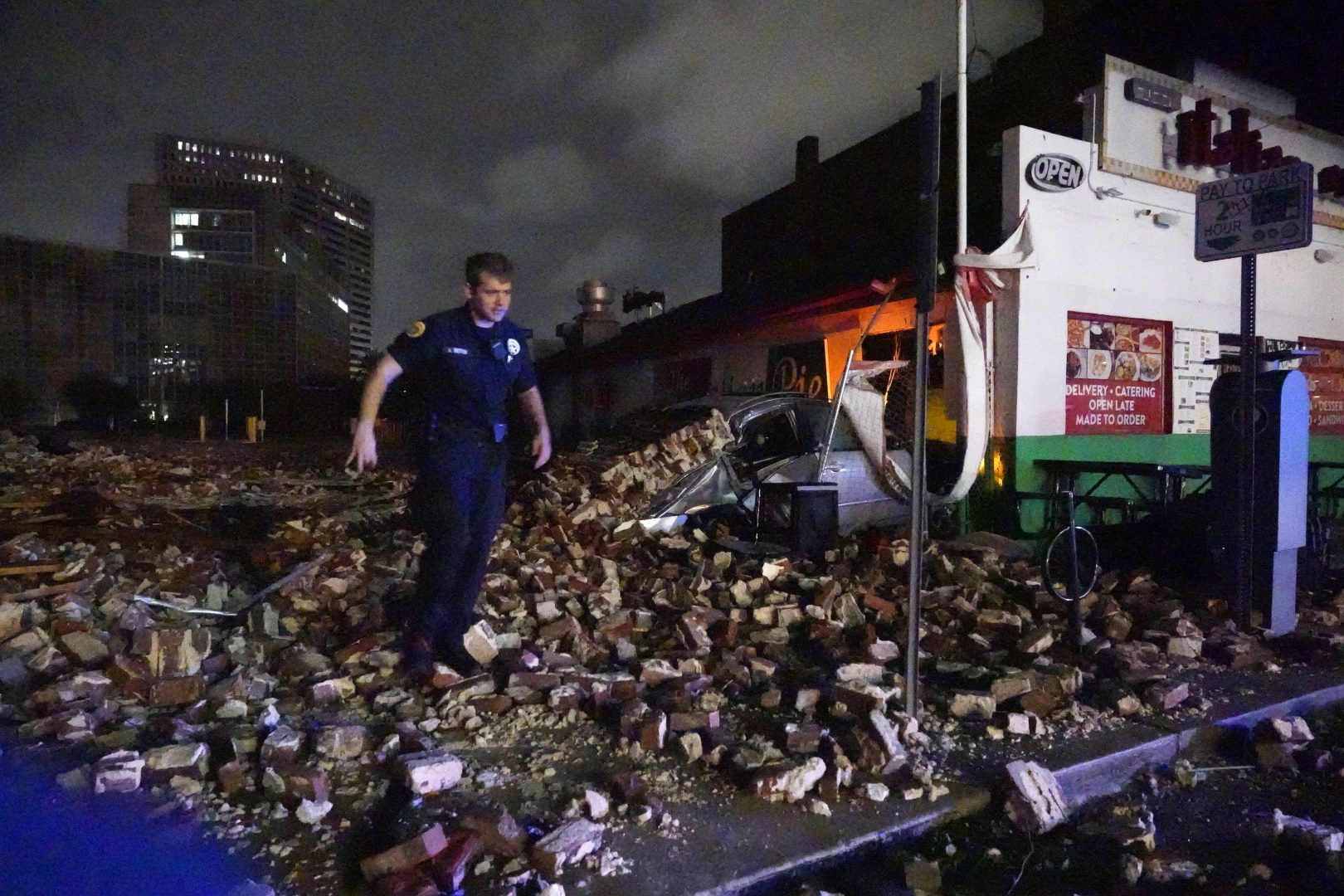 New Orleans Police detective Alexander Reiter, looks over debris from a building that collapsed during Hurricane Ida in New Orleans, Monday, Aug. 30, 2021. Hurricane Ida knocked out power to all of New Orleans and inundated coastal Louisiana communities on a deadly path through the Gulf Coast that is still unfolding and promises more destruction.

Here’s the latest on Ida, which has been downgraded from a hurricane to a tropical storm, but still poses a significant threat as it moves inland.

All of Orleans Parish was without power, relying solely on generators. The power company has warned that some people could be without power for weeks, and outages now stretch to Mississippi.

All of Orleans Parish lost power on Sunday night due to “catastrophic damage” to the local utility company’s transmission system. Earlier in the day, Entergy New Orleans — the electric utility that provides power to New Orleans and surrounding parishes — said the hardest–hit areas could have outages “for weeks.”

The only power in New Orleans was being provided by generators. There are concerns about how this will affect the city’s pumping systems. Half of New Orleans is at or below sea level.

(See a real-time electrical outage map for Louisiana here and a map of the effected areas in Mississippi here.)

Louisiana and Mississippi were already overwhelmed with COVID-19 cases before the storm struck. Now providing care is even more complicated.

There were 2,450 people hospitalized with COVID-19 as of Saturday, according to Louisiana Gov. John Bel Edwards, who notes that hospitalizations decreased 20% over the previous 10 days but still remained higher than at any point during the pandemic.

Hospitals generally try to discharge as many patients and staff as possible before hurricanes. Louisiana’s overcrowded facilities couldn’t fully evacuate, however, because so many of their patients are in intensive care units, as member station WWNO explains.

In southern Mississippi, which is also in the storm’s direct path, health officials have been diverting critical care patients to northern hospitals. Federal health care teams — which were already responding to the COVID-19 surge in Louisiana and Mississippi — will assist in that effort, Mississippi Gov. Tate Reeves said.

As WWNO reports, officials expect to be able to transfer those patients — most of whom are adults — to other facilities within the Ochsner Health System, but were waiting until winds decreased on Monday morning to move them safely.

The hurricane made landfall 16 years to the day that Katrina hit, and the trauma of that time is still fresh for some. This time, though, the levees are holding.

Weather-wise, Ida was actually stronger by some measures. Ida’s winds reached 150 mph compared to 125 mph during Katrina. But part of what made Katrina so destructive was what its winds did: They pushed a mountain of 20- foot storm surge ahead of it into Louisiana. During Katrina, the federally built levees and floodwall system failed, and 80% of New Orleans was inundated with catastrophic flooding.

In the years since Katrina, the federal government has changed how it builds levees, updating them to try to prevent another disaster.

Katrina was the costliest storm in history; it caused over 1,800 deaths and $100 billion in damage. It’s too early to tell what the toll from Ida will be — crews are still surveying the damage — but at least one person is reported to have died. Louisiana Gov. John Bel Edwards said Monday he expects the death toll to rise “considerably.”

Ida, already a Category 4 hurricane, is still intensifying as it nears the Gulf Coast