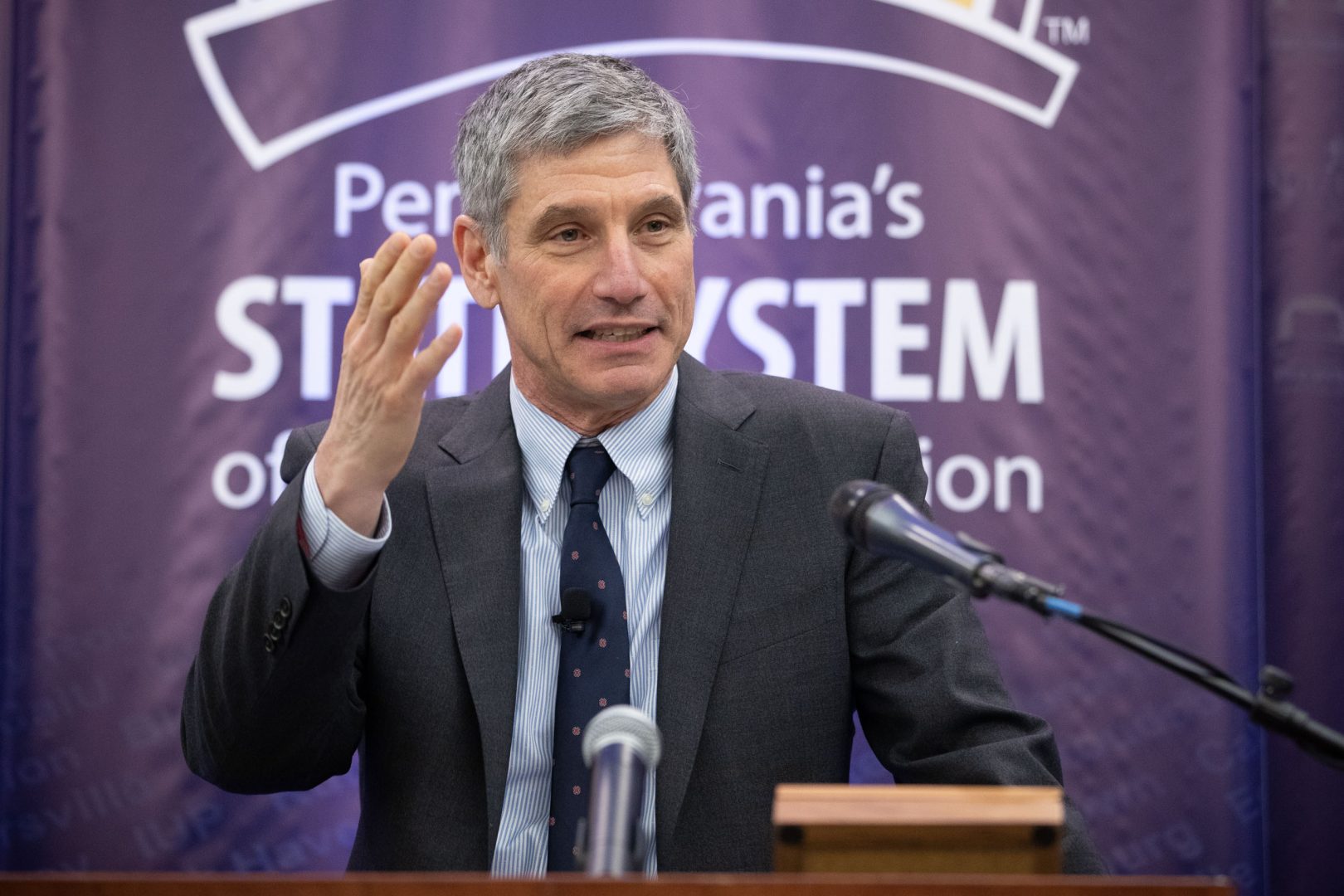 (Harrisburg) –– The head of Pennsylvania’s group of 14 state-owned universities is detailing how he’d like to spend $75 million of mostly federal pandemic relief money over the next year.

About two thirds of that is federal money aimed at helping the group of 14 universities recover from the coronavirus pandemic. The rest is savings the system recently realized by refinancing the pension debt it owes to the State Employees Retirement System.

State System of Higher Education Chancellor Daniel Greenstein shared a draft version of that plan with a state Senate committee Tuesday as he answered senators’ questions about the upcoming merger of Bloomsburg, Lock Haven, and Mansfield universities into one umbrella school, and California, Clarion and Edinboro universities into another.

The system’s Board of Governors voted to proceed with those mergers in a unanimous vote last week, and plan to launch the new “integrated” western and northeast university systems next July.

“That was really the beginning of a journey and not the end of one, and it will require continued engagement…as we build two regional educational powerhouses,” Greenstein told senators in his opening comments.

Greenstein’s spending ideas for the one-time money appeared to reflect that reality. He’s proposing $15 million of the money be spent on making the integrations happen, but also wants to spend other portions of it on making PASSHE schools more attractive in a post-pandemic world. 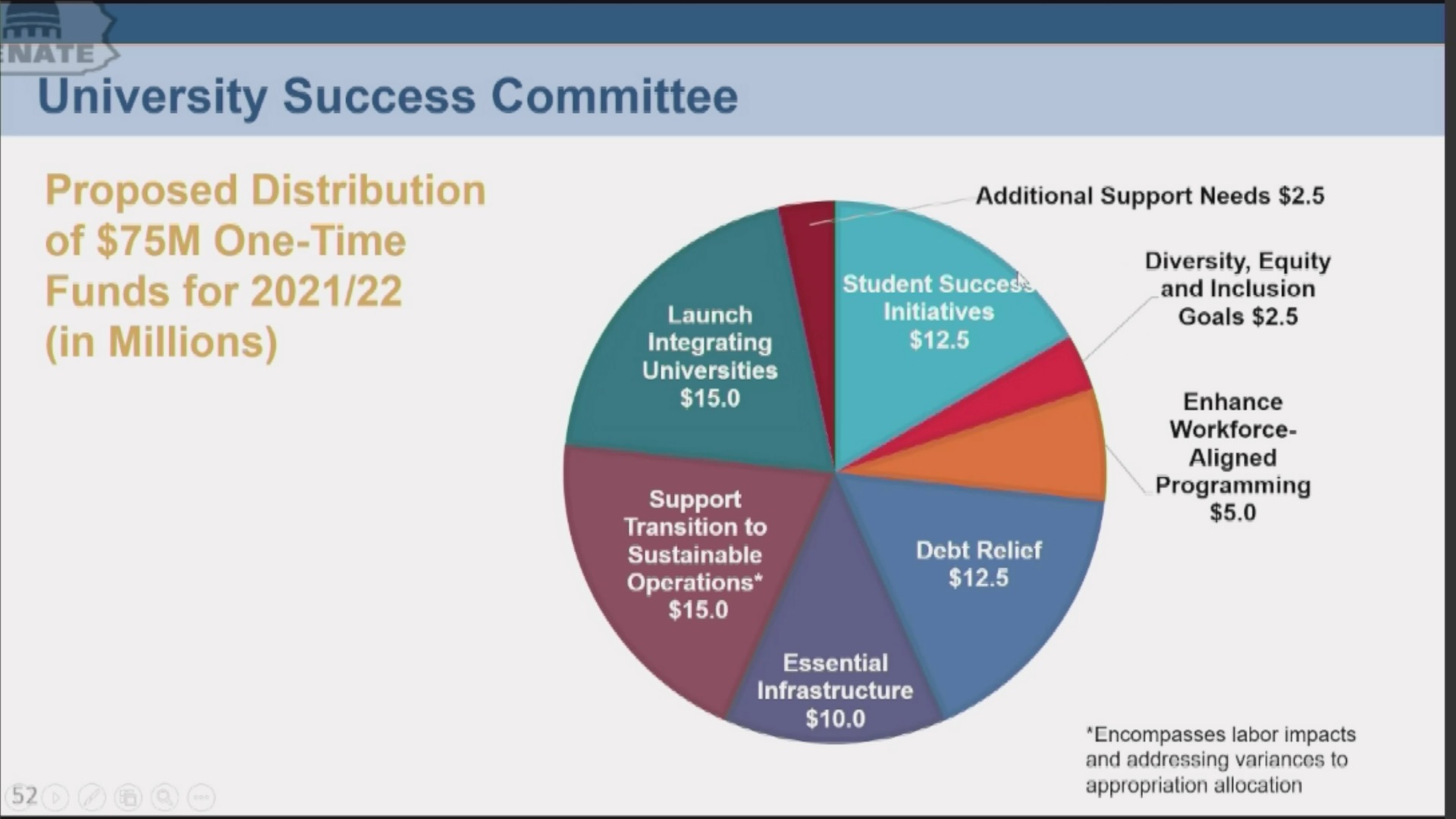 A screenshot from a July 20, 2021 presentation to the Pennsylvania Senate by PASSHE Chancellor Dan Greenstein, showing a proposed spending plan for a $75 million influx of money, most of which is meant to help the university system recover from the pandemic.

“The students coming back from the pandemic are going to be different than the ones preceding it, in terms of their expectations and the nature of the learning experience,” Greenstein said. “Universities and colleges generally will do well, as we will, to pay attention to those shifting patterns of behavior.”

The preliminary plan calls for more money to boost budgets at individual universities that are finding more “sustainable” ways to spend their money each year, as well as”essential infrastructure” like IT system upgrades at the soon-to-be merged schools. New opportunities to help students find jobs after graduation are also part of the mix as “student success initiatives.”

Greenstein also wants to use some of the cash to help schools dig out of the debt they’ve taken on in building and renovating residence halls that aren’t being used as much. Enrollment at PASSHE schools across the board has declined 20 percent since its peak in 2011, meaning fewer students need on-campus housing.

He indicated to state senators that while schools are exploring new ways to use those buildings, the system may eventually have to sell them off to save money. As it stands, PASSHE’s three soon-to-be merged universities in the west will be losing a combined several million dollars over the next few years as consolidation efforts continue.

“There’s a lot of potential uses [for] residence halls,” Greenstein said. “But that alternative takes a while to establish. It’s not a slam dunk, let’s put it that way.”

PASSHE’s Board of Governors is expected to mull a more detailed spending plan for the extra money in October.