May Pick of the Month: “Under a White Sky” by Elizabeth Kolbert 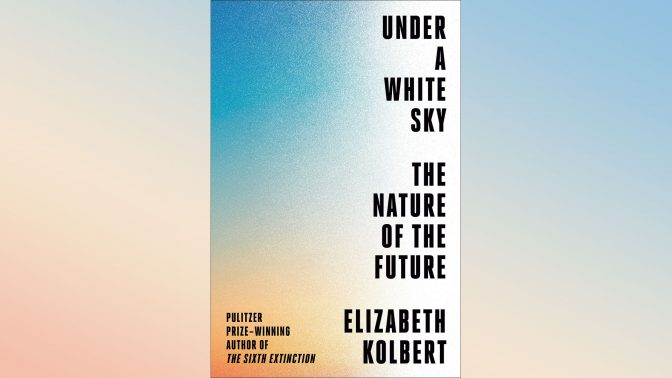 WITF is partnering with Midtown Scholar Bookstore on a Pick of the Month. Read along with us and discover books we think you’ll like. May’s pick is Under a White Sky by Elizabeth Kolbert.

That man should have dominion “over all the earth, and over every creeping thing that creepeth upon the earth” is a prophecy that has hardened into fact. So pervasive are human impacts on the planet that it’s said we live in a new geological epoch: the Anthropocene.

In Under a White Sky, Elizabeth Kolbert takes a hard look at the new world we are creating. Along the way, she meets biologists who are trying to preserve the world’s rarest fish, which lives in a single tiny pool in the middle of the Mojave; engineers who are turning carbon emissions to stone in Iceland; Australian researchers who are trying to develop a “super coral” that can survive on a hotter globe; and physicists who are contemplating shooting tiny diamonds into the stratosphere to cool the earth.

One way to look at human civilization, says Kolbert, is as a ten-thousand-year exercise in defying nature. In The Sixth Extinction, she explored the ways in which our capacity for destruction has reshaped the natural world. Now she examines how the very sorts of interventions that have imperiled our planet are increasingly seen as the only hope for its salvation. By turns inspiring, terrifying, and darkly comic, Under a White Sky is an utterly original examination of the challenges we face.

Join a free, virtual conversation with Kolbert and StateImpact Pennsylvania reporter Rachel McDevitt on Monday, May 24 at 6pm. Learn more and RSVP at midtownscholar.com.

witf Pick of the Month

‘We are not subjects of study!’: Protesters march on Penn Museum to decry handling of MOVE remains