Hundreds of people receive their first shot of the COVID-19 vaccine at a weekend vaccination event held at an Olivet Boys' and Girls' Club location in Reading.

Nonprofits pick up slack in vaccinating communities of color

Organizations meet new needs of people they have already built trust with. 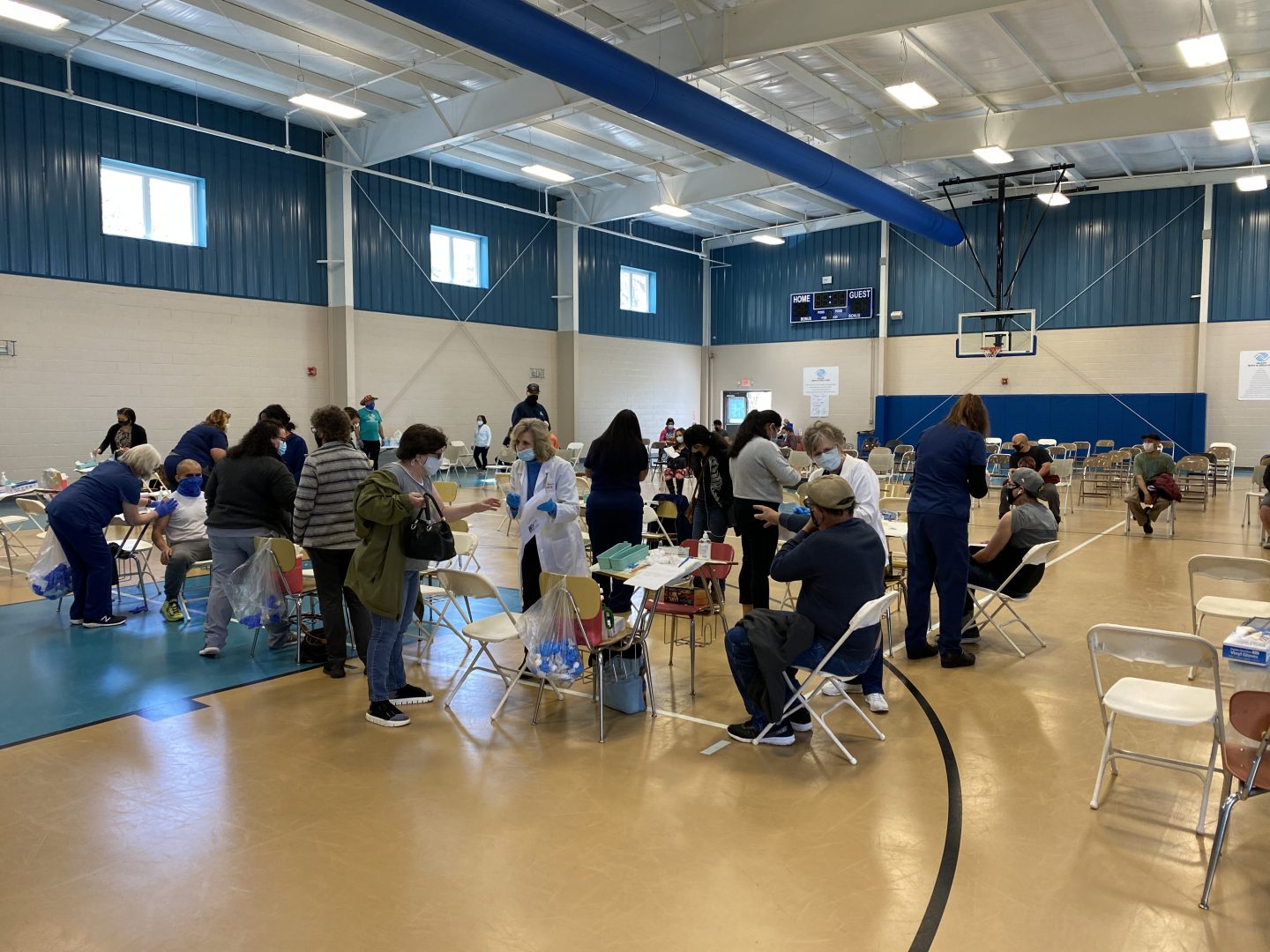 Hundreds of people receive their first shot of the COVID-19 vaccine at a weekend vaccination event held at an Olivet Boys' and Girls' Club location in Reading.

(Reading) — At a weekend vaccination event, hundreds of people filed into the Olivet Boys’ and Girls’ Club in east Reading.

People checked in, filled out personal information and got a shot in the arm in a matter of minutes.

Miguel Rubio, of Reading, sat for 15 minutes in post-shot observation. With a smile hidden behind a mask, he said the moment feels like part of a divine plan.

“Everyone has to make their own decision, I made mine to get vaccinated and I’m here because God wanted me to be here,” Rubio said in Spanish.

Rubio is one of thousands of people in Berks County who have benefited from nonprofit vaccination efforts.

witf · Nonprofits pick up the slack in vaccinating communities of color

Nonprofits like Centro Hispano Daniel Torres and Olivet Boys’ and Girls’ Club have been at the forefront in getting shots into the arms of people in Reading, particularly Spanish-speakers and those in low-income households.

Churches, family-owned pharmacies and nonprofits have filled in the gaps for vulnerable communities while Berks County was stalled in opening its own mass vaccination site.

Berks officials said in March it would have its mass vaccination site up and running in early April. Logistical issues with vaccines and staff caused the delay, according to county spokeswoman Stephanie Weaver.

“Now, through our clinical partner, Berks Community Health Center, the county believes we have access to a consistent source of vaccine from federal sources that will not affect the allocation coming to Berks from the state,” Weaver said in a written statement. “This vaccine source allows us to now open the door to a new site that can complement the ongoing efforts from the other providers in our community.”

With a vaccine source in place, the county has been able to move ahead with finalizing contracts for staffing the site.

The site, which is just north of the city, is scheduled to open May 3. And while its opening was pushed back several weeks, the county earlier this month established a call center where people can schedule appointments at clinics across Berks. In its first week of operation, the call center referred 205 people to openings at vaccine clinics. 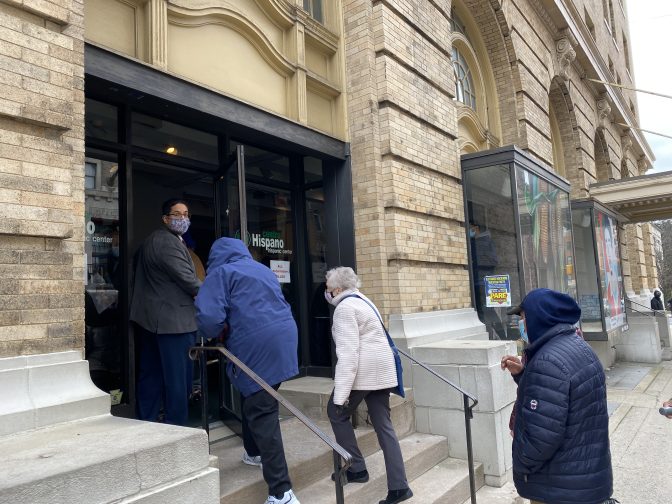 But those developments come after organizations in Reading have been conducting targeted vaccinations since March.

Marta Cruz, 76, was among the hundreds who attended. She said she appreciated the call from the housing authority because she had to sign up for other clinics via the internet.

“It’s hard to do by computer,” Cruz said in Spanish. “I tried at my girlfriend’s house and I couldn’t get an appointment.” 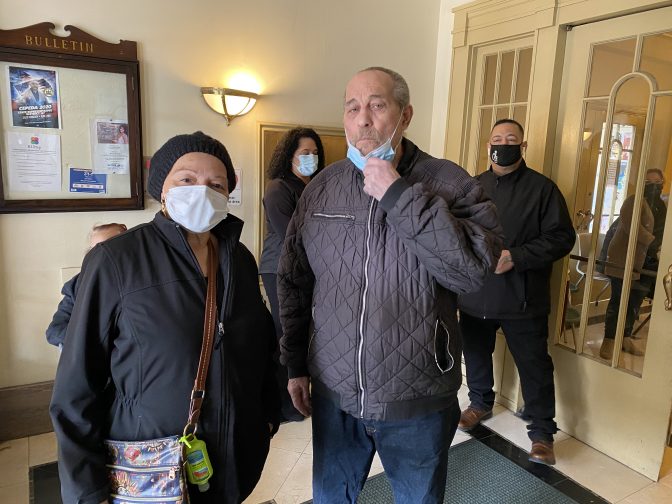 Centro later partnered with Olivet Boys’ and Girls’ Club, morphing their operations to meet the new needs of the community through weekend vaccination events.

In total, Centro and Olivet have fully or partially vaccinated more than 7,000 people, according to the organizations’ leaders.

Centro Hispano CEO and President Michael Toledo credited their combined vaccination efforts to several factors. The organizations had the staff on hand, venues throughout the city to hold events and a network of volunteers.

“We can’t always count or depend on the government to lead,” Toledo said. “There are times, yes, where we may need the government but more times than not, a local response is the best response to meet the needs of the community.” 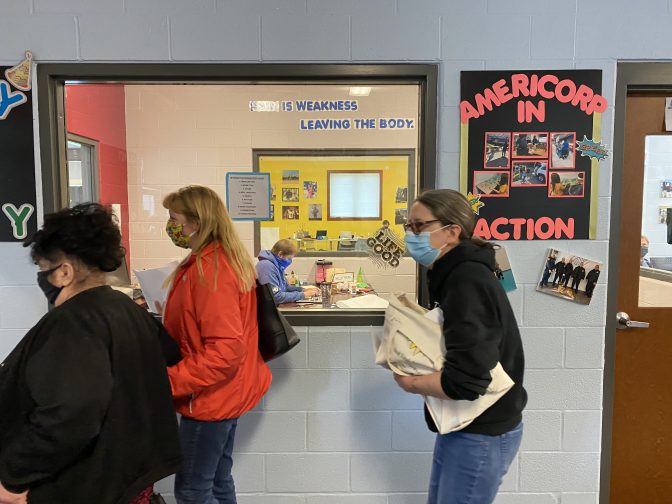 Olivet Boys’ and Girls’ Club CEO and president Chris works in his office as people head off to get their first shot of the COVID-19 vaccine down the hall from his office.

More than 12,000 Latinos in Berks — or 14 percent of the ethnicity in the county — have received at least one shot, according to the state Department of Health. Their non-Latino counterparts are vaccinated at a rate of 37 percent. But ethnic information is unknown for a fifth of shots given in Berks.

Nonprofits have also been making strides even in communities that already have mass vaccination sites, such as in Lancaster.

William Valdivia said he has wanted to get vaccinated for months. He wasn’t sure where to start, until he heard about a vaccination clinic on the local Spanish-language radio station, WLCH Radio Centro.

The Lancaster-based Spanish American Civic Association worked with Capital Blue Cross, Rite Aid and Radio Centro to set up the clinic and get the word out, said Sandra Valdez, the civic association’s chief operating officer. 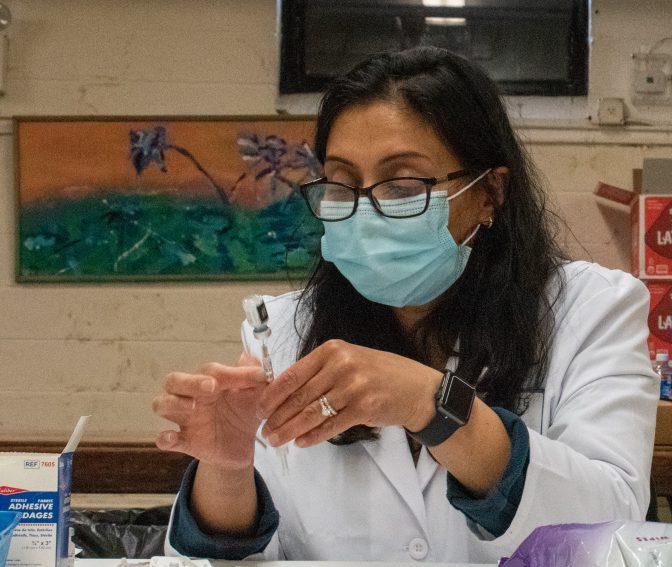 A health professional prepares a dose of the COVID-19 vaccine at the Spanish American Civic Association vaccination event on April 15.

Valdez said COVID-19 has hit Latinos hard in Lancaster. But when the vaccine became available, conspiracy theories on social media had some people hesitating to get vaccinated.

“That’s why we open up our doors, so that it will be from a trusted entity in the community that they know that we’re going to respect them, and trust that the information we’re going to provide them is accurate,” Valdez said.

A mass vaccination site at the Park City Center shopping mall has made it easier to get vaccinated, said Susan Hubley at Capital Blue Cross. However, some people don’t have transportation outside of the city or don’t feel comfortable leaving their neighborhoods.

The efforts of Berks nonprofits teaming up with small pharmacies has earned praise from local officials.

“And what I’ve come to appreciate is that the best solutions, and the best ideas come from local, non-governmental people,” he said.

CDC: If you're vaccinated, you don't need to mask outdoors (unless you're in a crowd)