A crowd gathers to protest in the neighborhood where a Columbus police officer fatally shot a teenage girl Tuesday, April 20, 2021, in Columbus, Ohio.

The Columbus Police Department released an edited version of the body camera video worn by the officer who shot Ma'Khai Bryant.

(Columbus, Ohio) — A 16-year-old Black girl was fatally shot by an officer outside of her home after she called the police for help on Tuesday afternoon, according to her family.

The girl has been identified as Ma’Khia Bryant by her aunt, Hazel Bryant.

Bryant allegedly called officers at about 4:30 p.m. local time when a group of “older kids” threatened her with assault, her aunt told Ohio Statehouse News Bureau Reporter Andy Chow. She did not elaborate on the nature of the threat.

The Columbus Police Department could not say on Tuesday whether Bryant was the one to call for assistance before she was shot.

Bryant was taken to a local hospital in critical condition where she later died.

A group is now gathered outside of CPD headquarters after family confirmed to @10TV police shot and killed a 15-year-old girl. Details here: https://t.co/yS0tcK14Qv pic.twitter.com/8mkCAttsYR

At a Tuesday night press conference, the Columbus Police Department released an edited version of the body camera video worn by the officer who shot Bryant. Police have not yet made public the name of that officer.

Interim Chief of Police Michael Woods told reporters the officer will be pulled off of patrol duty as the Ohio Bureau of Criminal Investigation looks into Tuesday’s shooting.

Columbus Police showed the video a second time in slow motion during Tuesday night’s news conference. Woods said the video shows Bryant holding a knife as she pushes two girls at the scene. He said police believe she is attempting to stab both girls during the fight.

It’s unclear, based on the footage, at what point Bryant gets ahold of the knife.

The fatal shooting occurred shortly before the verdict in the trial of former Minneapolis police officer Derek Chauvin who killed George Floyd was announced. It quickly drew at least a dozen Black Lives Matter protesters to the scene, WBNS News reported. The outlet said the demonstrators were on their way to rally in downtown Columbus to celebrate the guilty verdict in the Minneapolis trial where the former officer in that case was found guilty on three charges, including murder.

He said, “We know based on this footage, the officer took action to protect another young girl in our community. But a family is grieving tonight.”

Woods said emergency dispatch received a call at approximately 4:30 p.m. A female caller said other girls were at the home trying to “stab them and put their hands on them,” Woods said. Police officers were dispatched four minutes after the call ended and they arrived at the home at 4:44 p.m.

Body cam footage shows the responding officer getting out of his patrol car as he responds to a commotion on the driveway of a home. 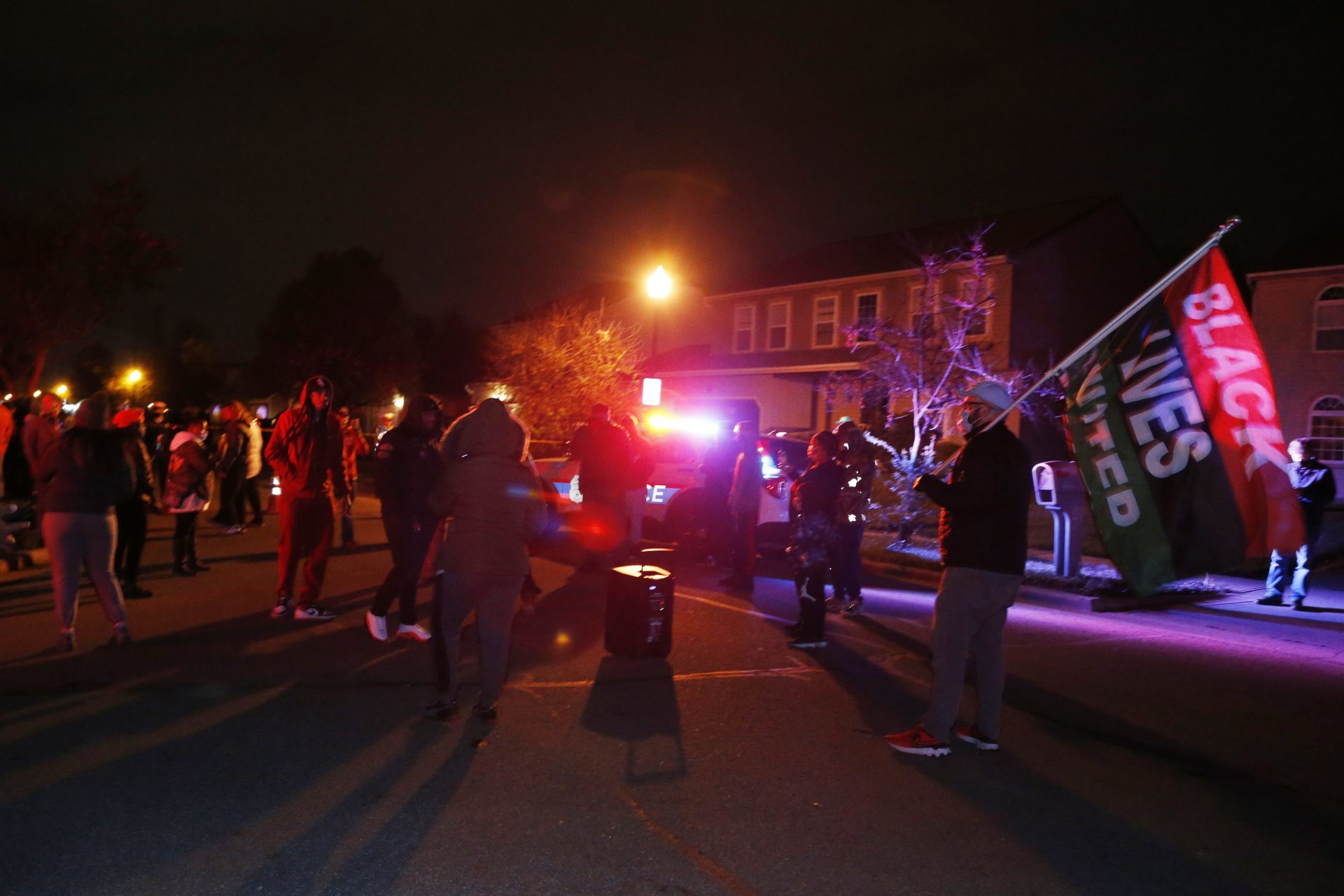 A crowd gathers to protest in the neighborhood where a Columbus police officer fatally shot a teenage girl, Tuesday, April 20, 2021, in Columbus, Ohio.

As he approaches a group of people standing and shouting on the driveway, he asks, “What’s going on?” Seconds later Bryant and another girl begin fighting in front of the officer.

Bryant can be seen pushing the girl to the ground. She then approaches a second girl and throws her against a car parked on the driveway. The officer shouts, “Get down!” three times, pulls out his gun and shoots in Bryant’s direction at least four times and she falls to the ground.

As the officer approaches her, a knife can be seen close to her.

One man standing off to the side on the driveway shouts to the officer, “She’s just a kid!”

The officer then tells two other policemen on the scene that Bryant had a knife and was “coming at” the second girl.

Woods said officers summoned a medic immediately and began CPR to Bryant. The video ends as officers on scene began to treat the girl.

The Columbus Police Department has handed the shooting investigation over to the Ohio Bureau of Criminal Investigation, which is a part of the attorney general’s office.

Woods said that under the Columbus Police Department’s policy, officers can use deadly force to protect themselves or a third person.

He would not say whether the officer violated the department’s standards or use of force rules. That will be decided at a later point during an administrative review, and it will be done only after the BCI concludes its own investigation.

Woods cautioned the shooting is still very new and “we are still gathering information.”

City officials said it sought to share the body camera footage hours after the shooting for “transparency.” But they noted the footage they shared with the media had been edited and was incomplete.

Woods said the department must follow the Ohio law on public records before it can share the full video. He said that process should be completed and the video will be released Wednesday. They will also release other details of the shooting and the officers involved, he said.

City of Columbus Director of Public Safety Ned Pettus told reporters answers as to what happened will be released in due time. He said, “Our city deserves answers. I want answers, but fast, quick answers can’t come at the cost of accurate answers.”

Ginther said the city will continue to share “as much information as possible, as quickly as possible” but not at the cost of the independent investigation by BCI.

Bryant’s mother described her daughter as “an honor roll student and a sweet child,” WBNS reported.

This afternoon a young woman tragically lost her life. We do not know all of the details. There is body-worn camera footage of the incident. We are working to review it as soon as possible. BCI is on the scene conducting an independent investigation . . .

News of the police shooting also drew protesters to the Columbus Police Department headquarters, where many chanted for Bryant’s name to be called.

“Say her name! Ma’khia Bryant!” they yelled outside of the station.

This is a developing story. Some facts reported by the media may later turn out to be wrong. We will focus on reports from police officials and other authorities, credible news outlets and reporters who are at the scene, and we will update as the situation develops.