As a balmy spring evening wore on, people who had protested repeatedly last summer in the name of racial justice appeared to want to savor this event either by soaking up the news from whatever screens they had, or just getting on with their lives with a sense of relief on their face. 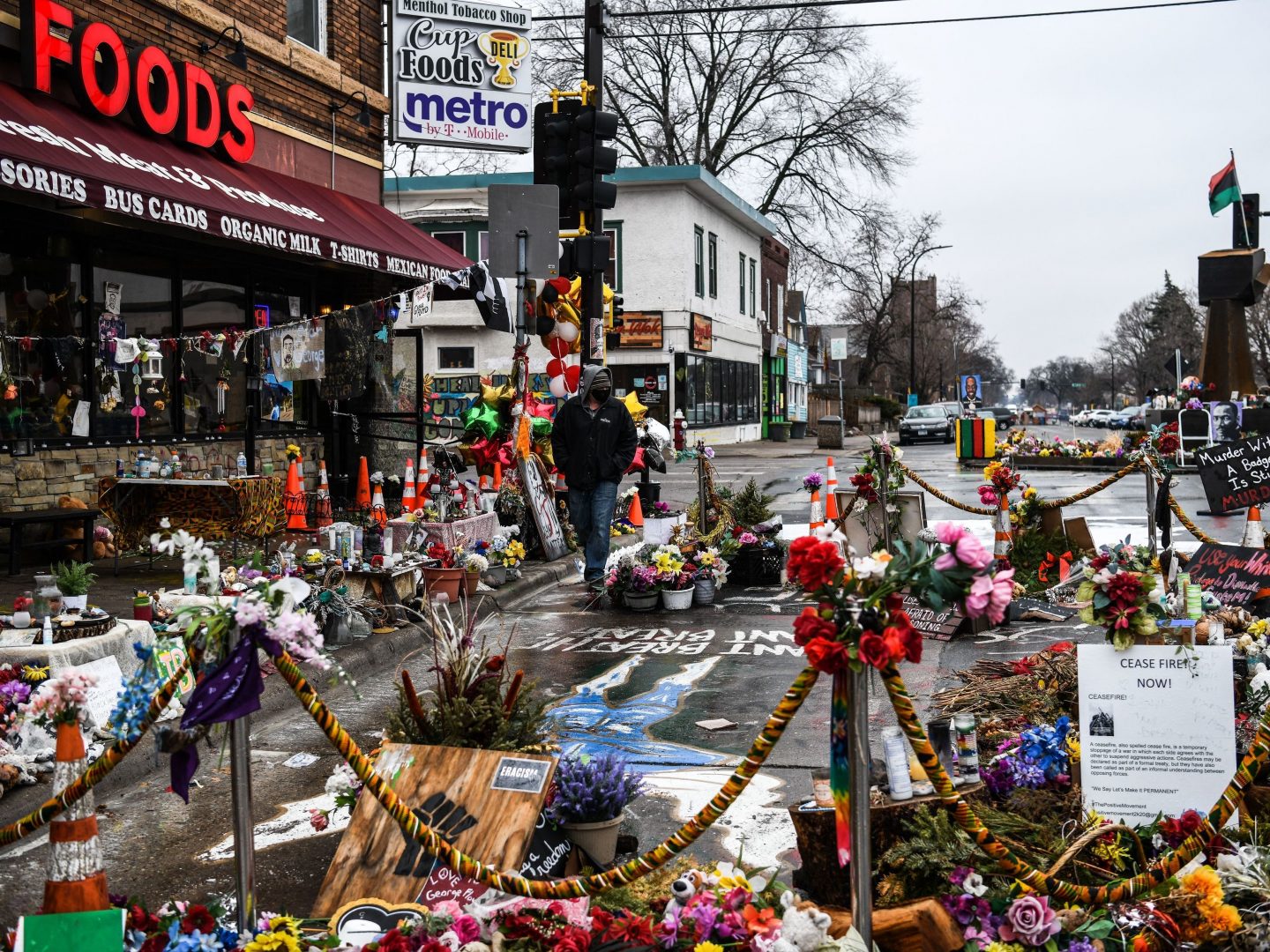 (Harrisburg) — As much as the videos of George Floyd’s death lit a fuse of anger and protest over repeated instances of Black men dying at the hands of police officers last summer, the instant aftermath of the conviction of Floyd’s killer Tuesdayevening seemed to fall like a balm on Harrisburg and its residents.

Tinny megaphones and throngs of chanting people on the march – here at least – gave way to satisfied smiles on front porches and in church yards Tuesday night in the hours after the news of former Minneapolis police officer Derek Chauvin’s conviction on murder charges broke.

That’s not to say the reactions to the verdict weren’t strong.

“Finally, finally some justice,” said Tina Lowery, a 47-year-old South 17th Street resident as she let the news soak in from her front porch with her husband, Evans.

“It (Floyd’s death) was all on tape. Everybody could see what we’ve been stating for years about the violence against us. There have been several times where we tried to get a conviction (of a police officer) where it didn’t go our way. So, I am elated. I mean, I cried. It was that emotional,” Lowery said.

Like many, they’d been following the trial carefully from Day One. 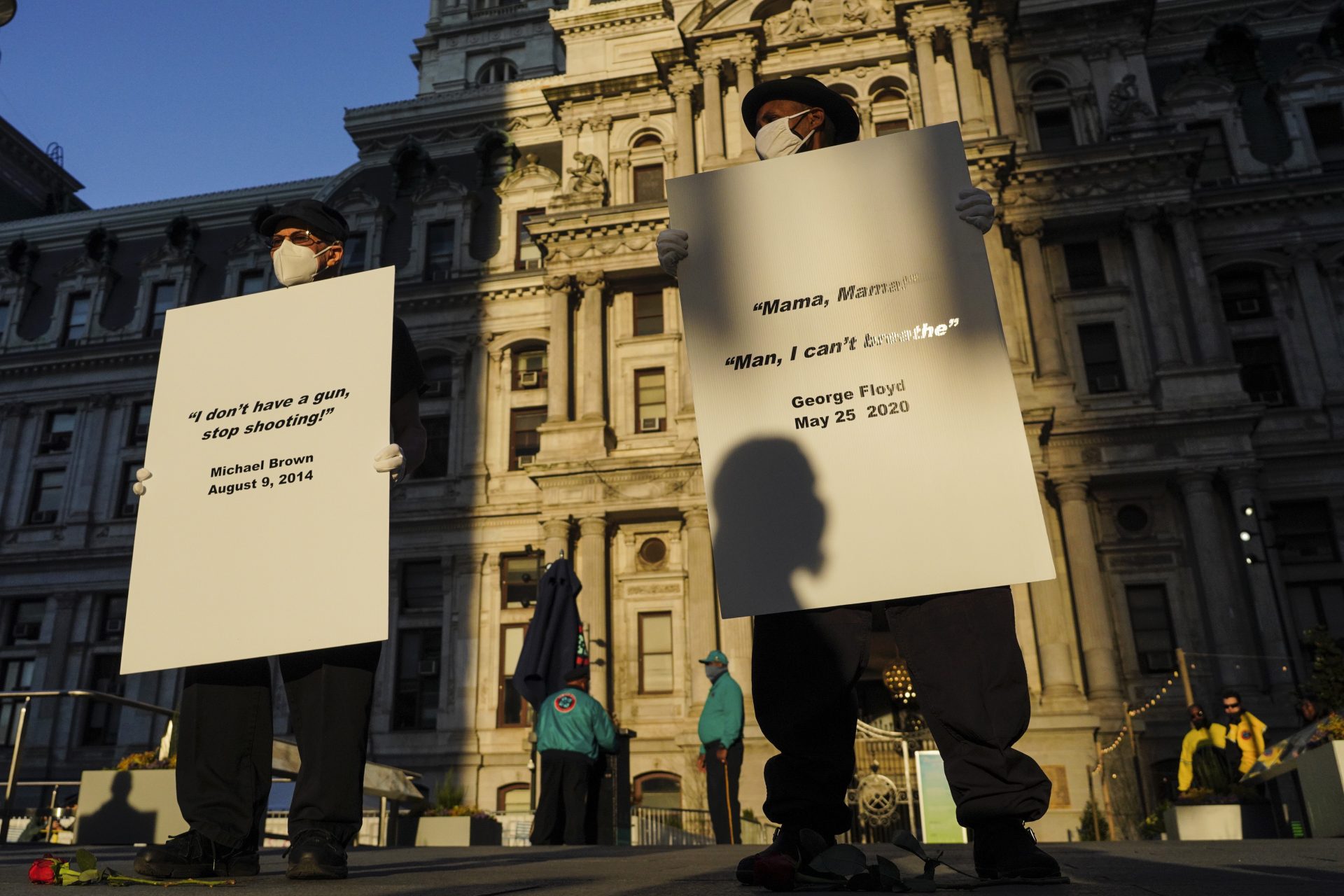 People gather after a guilty verdict was announced at the trial of former Minneapolis police Officer Derek Chauvin for the 2020 death of George Floyd, Tuesday, April 20, 2021, at City Hall in Philadelphia. Chauvin has been convicted of murder and manslaughter in the death of Floyd.

And they admitted that in their view as consumers of the news, there was no way that Chauvin was going to walk. But, African-Americans’ tortured history with law enforcement allowed a lot of doubt to creep in – would that jury see things the way they did? And unanimously?

“I told him,” Tina said, “I said OK, I’m really nervous. My heart right now is in my feet because I don’t know how this is going to go. But I pray that for once, everyone can see exactly what we’ve been talking about.”

“Is anybody already experiencing stomach flips, tears, anxious feelings?,”she posted on Facebook. “I am.”

Her post got dozens of affirmative responses. She and her friends felt like they have been holding their breath since the day George Floyd died.

And then the verdict came in: guilty on all counts.

“I’m exhaling because justice does bring comfort. It doesn’t bring closure. But it brings comfort,” DeJesus said, breaking down into sobs. “I don’t think some people really understood what was at stake. This was about more than just a rogue cop.”

As a balmy spring evening wore on, people who had protested repeatedly last summer in the name of racial justice appeared to want to savor this event either by soaking up the news from whatever screens they had, or just getting on with their lives with a sense of relief on their face.

Most residents reached by PennLive Tuesday said they weren’t going to celebrate too much too soon because the Chauvin verdict is still just one episode that’s gone the right way, and the former officer’s actions – egregious as they were – set a pretty low bar for justice in this case after all.

A reporter broke the news to Ahmiere Mumford, a 20-year-old Black man from 16th Street who noted that he’d been stopped and searched by city police earlier in the day. 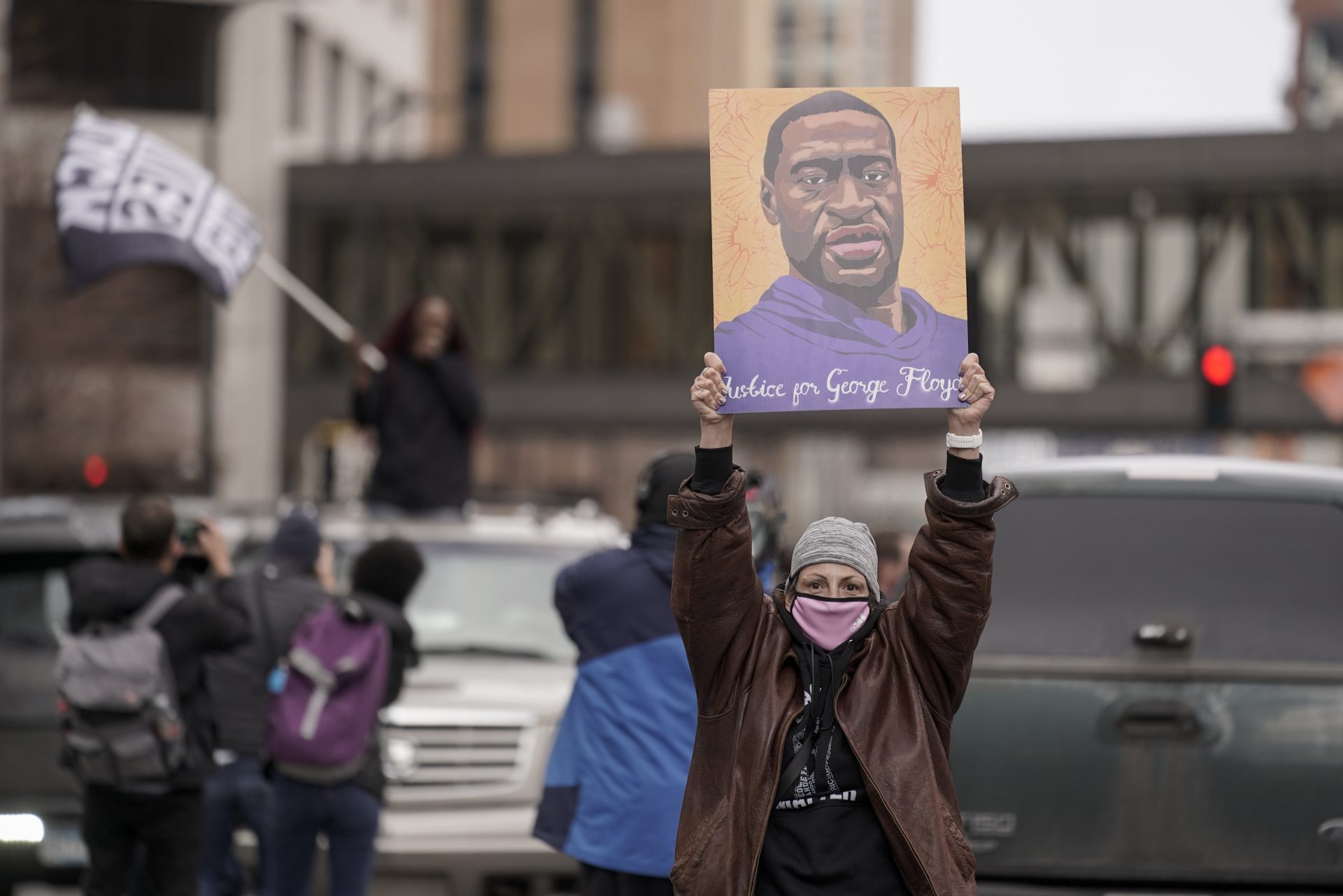 “That’s a good thing,” he said, nodding his approval at the news while astride his bicycle. “Because how often do you see a white cop get charged for committing any type of anything to a Black male, or anybody period? For real, know what I mean?
But Mumford, who is unemployed at the moment, said while he was surprised that the charges based on Floyd’s death weren’t dismissed, he didn’t want to read into to it anything more than one case turning out the right way.
“That’s just one case,” Mumford said, noting several other Black men had died at the hands of police across America even during the course of the trial. “That type of stuff still is happening so it’s like, no reason to make a big whoop about it now.”
In fact, The New York Times reported on Sunday that since testimony began in the Floyd trial on March 29, at least 64 people have died at the hands of law enforcement nationwide,with Black and Latino people representing more than half of the dead. As of Saturday, the average was more than three killings a day.
“It’s all quiet in the city, and we’re very happy about that,” said Blake Lynch, director of community relations for the Harrisburg Bureau of Police.

It was too early, of course, for assessments of how many of those cases were justified or not.

There were some isolated incidents of exhilaration, however.

One car cruised down Market Street, the driver honking his horn, and yelling out his open window for all within earshot to hear: We Won!” It was 6:15 p.m., so he wasn’t talking about a Phillies or Sixers game.
But the more prevalent reaction was subdued satisfaction. 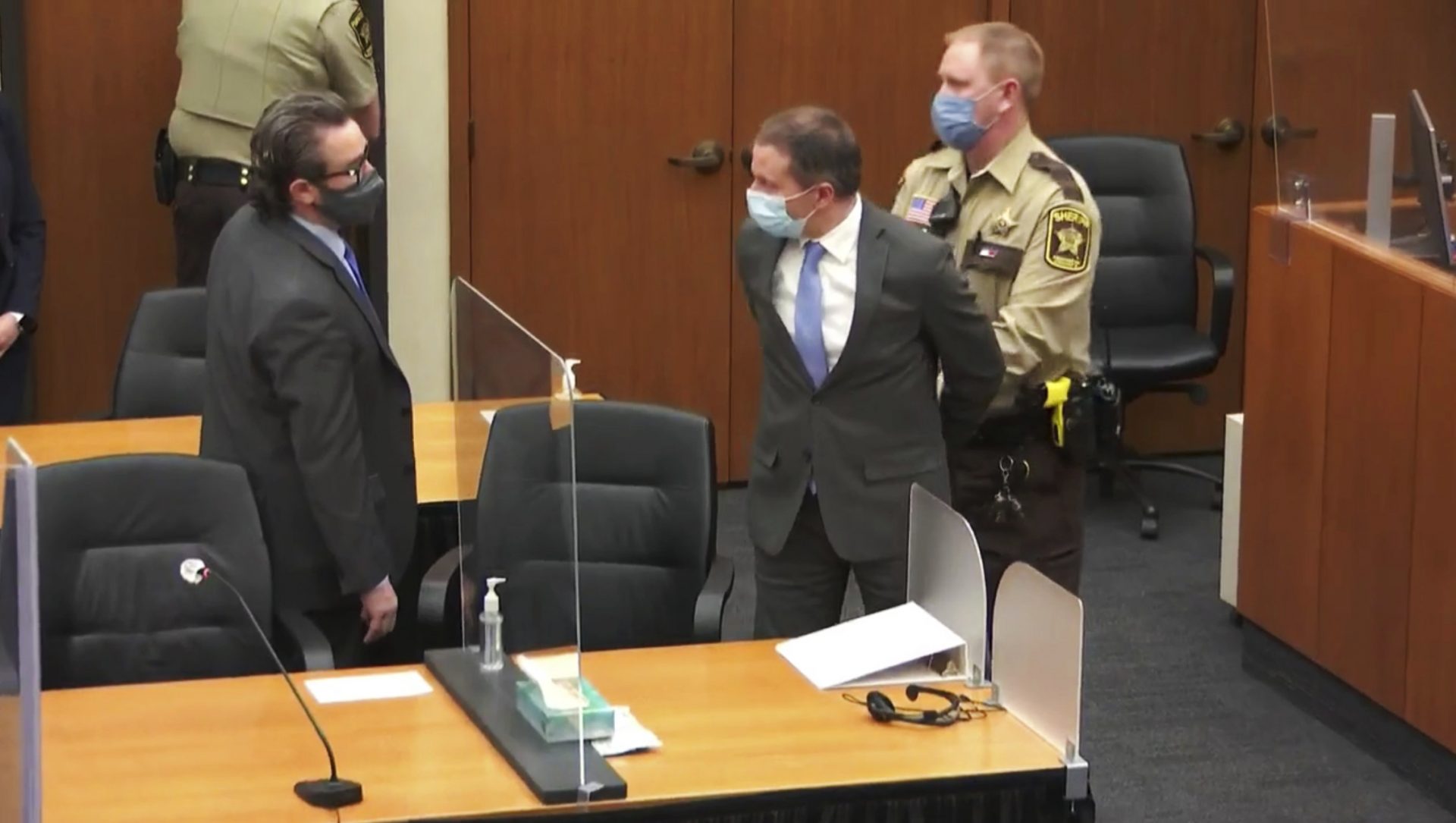 In this image from video, former Minneapolis police Officer Derek Chauvin, center, is taken into custody as his attorney, Eric Nelson, left, looks on, after the verdicts were read at Chauvin’s trial for the 2020 death of George Floyd, Tuesday, April 20, 2021, at the Hennepin County Courthouse in Minneapolis, Minn.

“I think Ray Charles would have seen this, that the man was guilty,” said Otis Harrison, the operator of OD’s Fish House on Market Street.
Still, Harrison allowed, he had been taking a wait and see stance on the verdict.
“Because of the past, I was concerned about it. And also with coronavirus we couldn’t see the jury to see, who was there and what was sticking with them. That’s what scared a lot of people too. But at least it did go the way that we, I think, we all wanted it to,” Harrison said, as a wall-mounted television played some commentary in the background.
Harrison, unlike Mumford, did allow himself the hope that the verdict will be a springboard for continued conversation and action on police reforms, or, at the least, a fresh cautionary tale for those who wear the badge to understand that when they enforce the law, they still are not above it.

“So hopefully, cops now will see that that this could happen to them if they do something wrong,” he said.

The fact that police officials testified against Chauvin at his trial instead of making excuses, gave DeJesus, the nervous Facebook poster, some hope for progress in the fight against systemic racism.

“Now the message is hopefully, cops will no longer act like criminals because of the color of someone’s skin or the place they are in society,” she said. “Those are the ones that will no longer have free rein. It took the good cops to stand up and say something.”
DeJesus stressed she doesn’t have anything against police officers. She has close relatives in the profession.
“I don’t hate cops, but I hate this system that promotes inequality,” she said. “With this case, there was the hope that America might acknowledge the injustice: Will this matter? For this one it mattered. Black lives have to matter. The system never been for us. It’s got to be broken.”

In the meantime, as the dialogue on policing and race in America goes forward, the Lowerys said they will continue to advise their kids to be very careful about their encounters with the police.

“If you’re from here, from Harrisburg, the way we teach our kids is like, don’t mouth off or nothing like that,” said Evans Lowery.

“Just be quiet, and let us get there,” added Tina. “Because I don’t want to have to deal with anything like that.

“And we’re kind of cool with cops too,” the Lowerys noted.

“Oh yeah,” Tina added. “Really, there are some really cool police officers. I don’t lump them all into one box. There is just right, and wrong. And more often than not, we (African-Americans) get the wrong.”

‘This is a landmark case’: Philly area processes guilty verdict in the murder of George Floyd