‘It has to stop’: Biden takes initial action on guns, calls on Congress to do more

Among the actions Biden announced: An effort to rein in the proliferation of so-called ghost guns, which can be assembled at home from kits and contain no serial numbers

(Washington) – Declaring U.S gun violence an “epidemic” and “an international embarrassment,” President Biden outlined actions to regulate certain firearms and to try to prevent gun violence after a spate of mass shootings in recent weeks and pressure from advocates.

“This is an epidemic for God’s sake, and it has to stop,” Biden said.

Biden made the announcements in the White House Rose Garden, in front of an audience of lawmakers and advocates for stricter gun laws. Attorney General Merrick Garland and Vice President Harris also spoke.

Among the actions Biden announced:

Biden also said he will nominate David Chipman to lead the Bureau of Alcohol, Tobacco, Firearms and Explosives. Chipman is a 25-year veteran of ATF who worked on investigations of the Oklahoma City bombing in 1995 and the 1993 bombing of the World Trade Center. Most recently he has served as senior policy adviser at Giffords, an advocacy group against gun violence founded by former Congresswoman Gabrielle Giffords, who was wounded in a 2011 mass shooting. 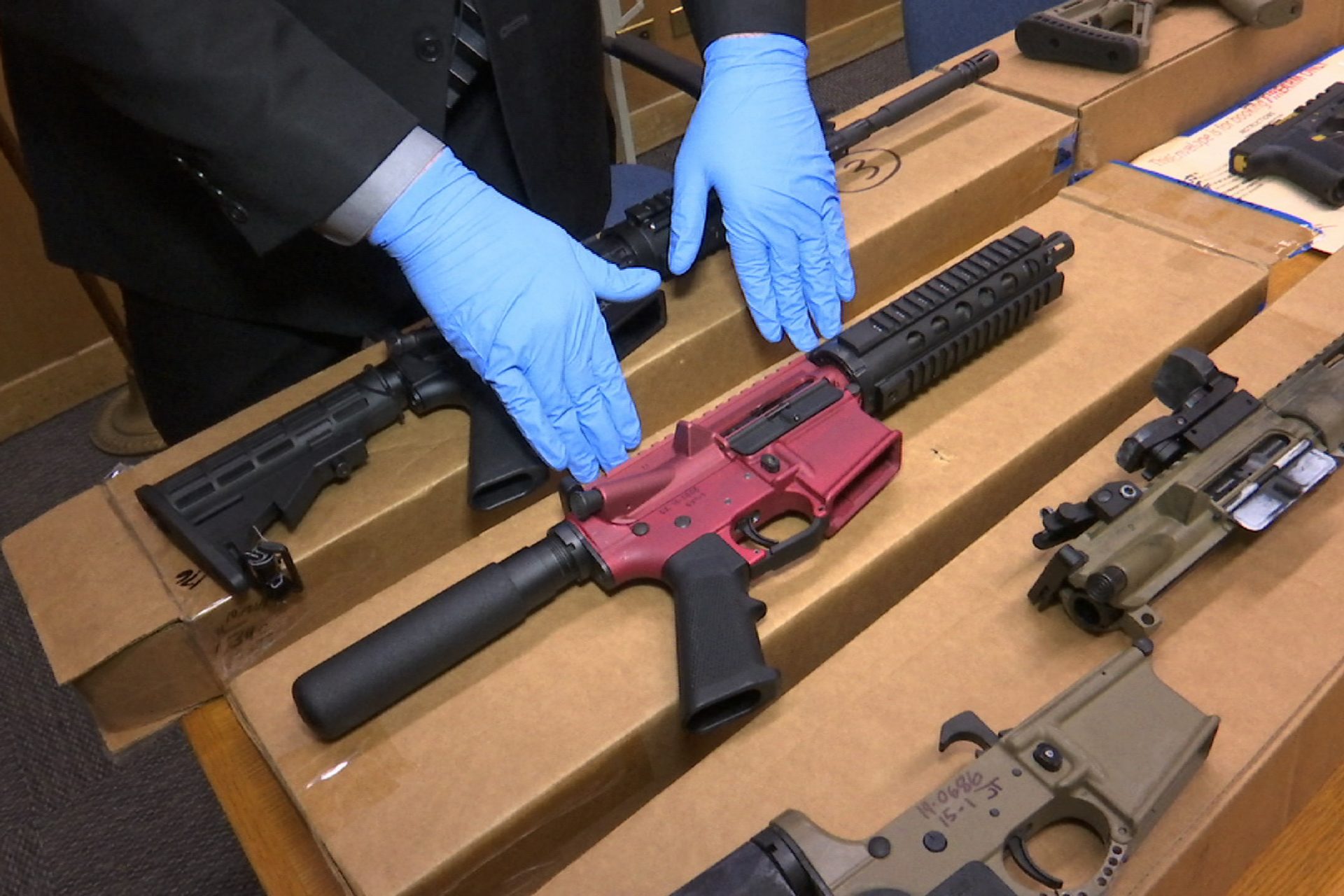 In this photo taken Wednesday, Nov. 27, 2019, is Sgt. Matthew Elseth with “ghost guns” on display at the headquarters of the San Francisco Police Department in San Francisco.

Prospects for Chipman’s confirmation in the narrowly divided Senate are uncertain. ATF has been without a permanent director since 2015.

Biden has been under pressure to act to curb gun violence after the shootings in Boulder and at several Atlanta-area businesses that killed eight people, six of whom were women of Asian descent, last month.

As a member of the Senate, Biden was in the forefront of passing measures regulating guns, including a ban on sales of assault-style weapons and the Brady law, which instituted a nationwide system of background checks.

But as president, Biden has been relatively cautious, calling on the Senate to pass House-approved measures expanding background checks and giving the FBI more time to process them, but he had been prioritizing other actions, such as a COVID-19 relief bill and his infrastructure and jobs plan.

The infrastructure proposal contains some $5 billion to prevent community-based violence.

Biden reiterated his call for the Senate to act on the House bills on Thursday, but it’s not clear the measures have a simple majority there, much less the 60 votes they would need to overcome a Republican filibuster. Biden said members of Congress have “offered plenty of thoughts a prayers,” but have failed to pass any legislation.

Gun rights advocates are likely to challenge the new restrictions in court.

Almost 19,000 migrant children stopped at U.S. border in March, most ever in a month