Atlanta Braves' Marcell Ozuna (20) stands with his bat during the seventh inning of a baseball game against the Philadelphia Phillies, Saturday, April 3, 2021, in Philadelphia. The All-Star Game patch that appeared on the right sleeve of the Braves' jerseys during opening day was sewn over Saturday against Philadelphia at Citizens Bank Park. (AP Photo/Laurence Kesterson) 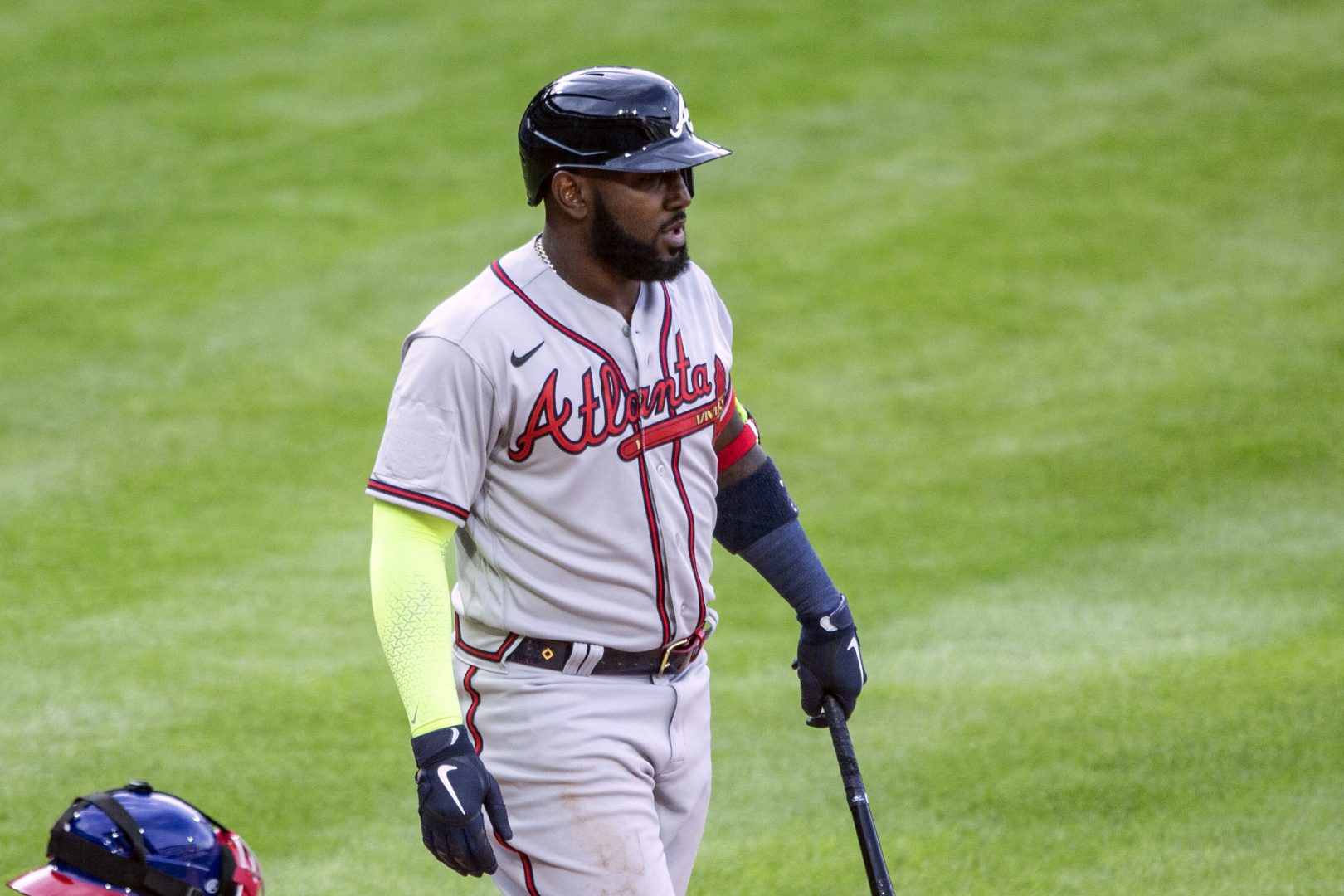 Atlanta Braves' Marcell Ozuna (20) stands with his bat during the seventh inning of a baseball game against the Philadelphia Phillies, Saturday, April 3, 2021, in Philadelphia. The All-Star Game patch that appeared on the right sleeve of the Braves' jerseys during opening day was sewn over Saturday against Philadelphia at Citizens Bank Park. (AP Photo/Laurence Kesterson)

(Philadelphia) — The Atlanta Braves looked a little patchwork in their second game of the season.

The All-Star Game patch that appeared on the right sleeve of the Braves’ jerseys during opening day was sewn over Saturday against Philadelphia at Citizens Bank Park. The same logo was gone from their hats, too.

The uniform change came a day after Major League Baseball announced that this summer’s All-Star Game was being moved out of Atlanta over the sport’s objections to sweeping changes to Georgia voting laws.

It was easy to spot the change on the jersey, with the outline of the All-Star patch hastily covered over. The Braves still have a patch on their left sleeves marking the 150th anniversary of the franchise.

The summer event had been scheduled for July 13 at Truist Park in Atlanta.

“I’m disappointed that it’s not going to being there,” Braves manager Brian Snitker said before a 4-0 loss to Philadelphia. “But I’m focused on playing baseball and what we’ve got going on this season. Other than being disappointed, that’s all I have to say on it.”

Said Atlanta pitcher Charlie Morton, in his 14th season big league season: “It’s about more than just the guys in the clubhouse. It’s about the city of Atlanta, the state of Georgia, the Braves organization, people coming in from all over the country and the businesses in the area seeing a boost.”

“I’m disappointed for the Braves organization and those who are local who would have benefitted seeing the influx of business and excitement in the area. It’s a bad situation. Some of the guys who are likely to be on the team, it would have been nice to represent the team in their home park. People would have been able to see what was done in the ballpark,” he said.

“Other than that, I don’t know what to say about it. It just stinks,” he said.

A new site for the game hasn’t been announced.

MLB said the All-Star Game festivities will still feature a planned tribute to late Braves Hall of Famer Hank Aaron, a civil rights hero. Houston manager Dusty Baker, who played with Aaron in Atlanta, and several others have suggested the event be held in Milwaukee — Aaron began his career with the Milwaukee Braves and finished with the Milwaukee Brewers.

“I think Major League Baseball made a good decision,” said Brewers manager Craig Counsell, who added he’d like to see the game held in Milwaukee.

Commissioner Rob Manfred made the decision to move the All-Star Game and events, along with the amateur draft, from Atlanta after discussions with individual big leaguers and the Players Alliance, an organization of Black players formed after the death of George Floyd last year.

“This all came together rather quickly,” said Chicago Cubs outfielder Jason Heyward, who is Black. “We had, I think, a day left in spring training. The Players Alliance, we gathered and got as many people as we could on a call. It was probably less than 50 guys on there out of the 100 or whatever. We had our conversation.

“We knew how we felt about it. We wanted to make sure, I think, that regardless of what happened, the decision was made, that we were there to do what we could in Atlanta,” he said.

Heyward, who grew up in the Atlanta area and was the Braves’ first-round draft pick in 2007, said “it was nice to see someone make a move pretty quickly and try to do it in a positive light, knowing it’s still a tough decision.”

“I think you’re not going to be able to please everybody. I know there’s a lot of people in Atlanta that love baseball and were looking forward to see an All-Star Game there. A Midsummer Classic, I think that’s special, as somebody growing up there and watching a lot of baseball,” he said. “But at the same time, I think when you talk about a message, the people are still out here pushing for equality.”

Confederate symbols prove difficult to remove in many states