Pennsylvania Governor Tom Wolf speaking with the press during a visit to a drive-thru mass vaccination clinic for Dauphin County residents at Harrisburg Area Community College on March 30.

Providers like federally qualified health centers and mass vaccination sites run by health systems have given doses to about 75 percent of people in the 1A block. 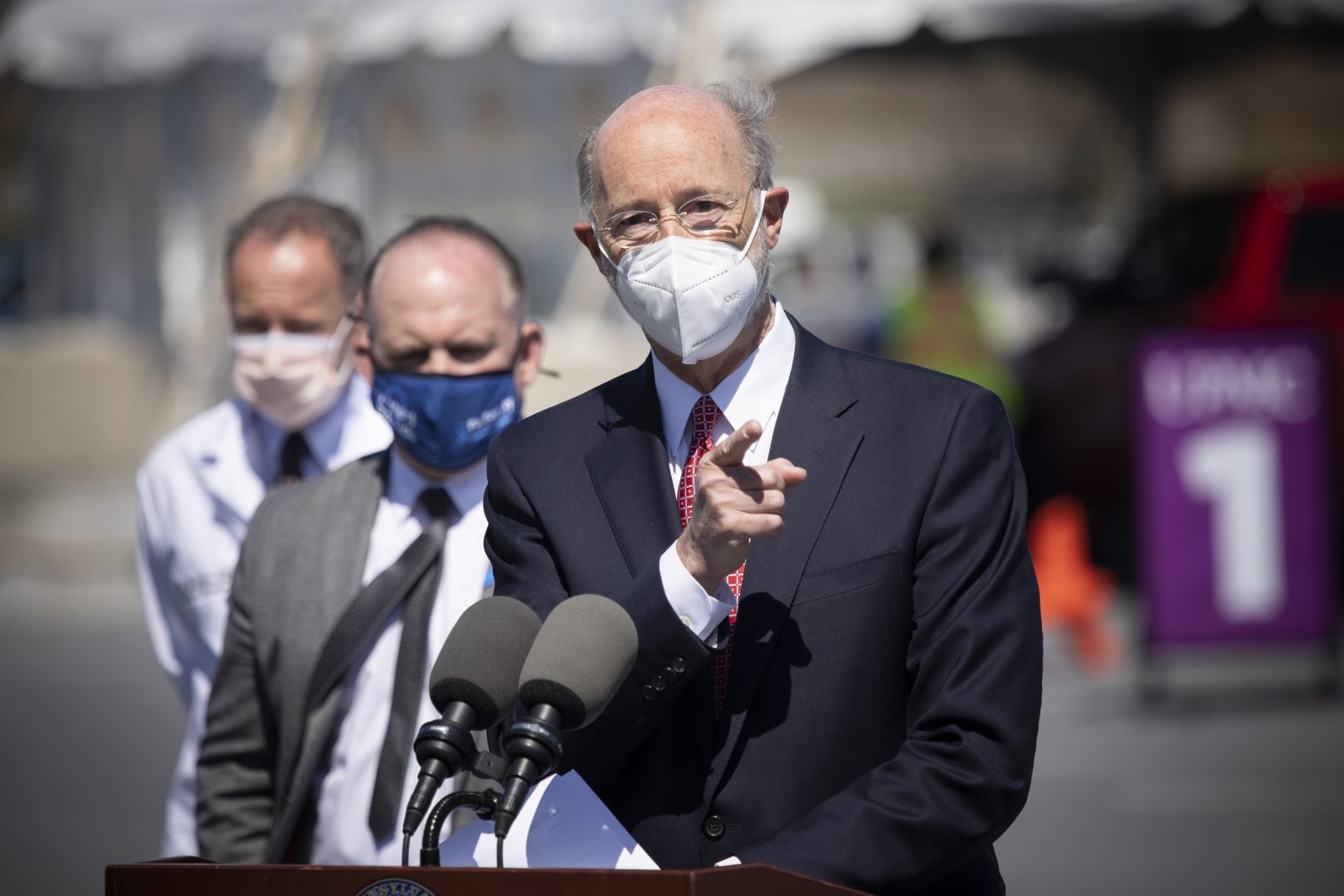 Pennsylvania Governor Tom Wolf speaking with the press during a visit to a drive-thru mass vaccination clinic for Dauphin County residents at Harrisburg Area Community College on March 30.

(Harrisburg) –– Gov. Tom Wolf said Tuesday that the commonwealth could finish scheduling and vaccinating eligible people in the 1A group within the next few days, and is on track to finish vaccinating public and private education professionals well ahead of schedule.

Despite those milestones, he isn’t ready to say when Pennsylvania will expand eligibility for COVID-19 shots, despite climbing case numbers and a number of similarly-sized neighboring states announcing they will offer shots to more groups of people.

“We’re talking about that now, as to how we want to move beyond where we are right now and how quickly we can do that,” Wolf said.

The vaccination effort has been going on for roughly four months. In that time, providers like federally qualified health centers and mass vaccination sites run by health systems have given doses to about 75 percent of people in the 1A block. That group is made of up of those over 65 years old, health care professionals, and those with underlying health conditions like COPD and obesity.

That translates to just over 3 million people who have gotten at least their first dose, and about 1.8 million people who are fully vaccinated. The commonwealth has been vaccinating 83,000 people every day for the last several weeks, according to Department of Health data. An NPR analysis shows that’s about on par with the rest of the nation and with states that have similar populations.

At the same time, neighboring states like Ohio and New York are on pace to open eligibility to nearly all adults in a matter of days. A Wolf administration spokesperson said Pennsylvania won’t be far behind, but health experts will need to first consider the number of shots scheduled to arrive from the federal government, as well as the number of people refusing a vaccine, before expanding eligibility to the 1B group and beyond.

“The goal is to get the vaccines to as many people as quickly and as fairly as possible. That’s always been the goal, and it remains the goal,” Wolf said. “So the sooner we can get to that point where everyone is eligible, the happier I will be.”

To make that happen, the administration has been steadily making mass vaccination sites a more central component of its distribution strategy. Wolf has visited several across the commonwealth in the last few weeks — stopping at one in Harrisburg operated by UPMC on Tuesday.

President Phil Guarneschelli said the drive-through site has been open for a little more than a week and has enough doses to vaccinate about 3,000 people per week.

“Our goal is really simple: We aim to meet people where they are and to vaccinate as many individuals as we possibly can with our available supply,” Guarneschelli said.

The health system said it’s keeping the Harrisburg site open three days per week right now and expects to be operating four days per week by the middle of next month. Vaccinations there are only available by appointment to those who have registered with UPMC online.

As of Tuesday, 90,000 people have snagged a spot so far at the health system’s vaccination sites across the state.

Local and state leaders touted the public transportation being offered to and from the Harrisburg site for those who need it, but wait times for buses are long. One man, Theodore Heidelberg of Harrisburg, said he had to stand in a waiting area for more than 45 minutes before his bus arrived.

“We still know there’s a great deal of frustration to provide access and information…but this isn’t about taking credit. This isn’t about pointing fingers. This is about working together to defeat a common enemy,” Hartwick said.