Cericka Womack is the owner of Phusions Beauty Salon in Chester, Pa.

“It’s a blessing to us all to have something, to have somebody recognize that we did lose things, and try to help us get back." 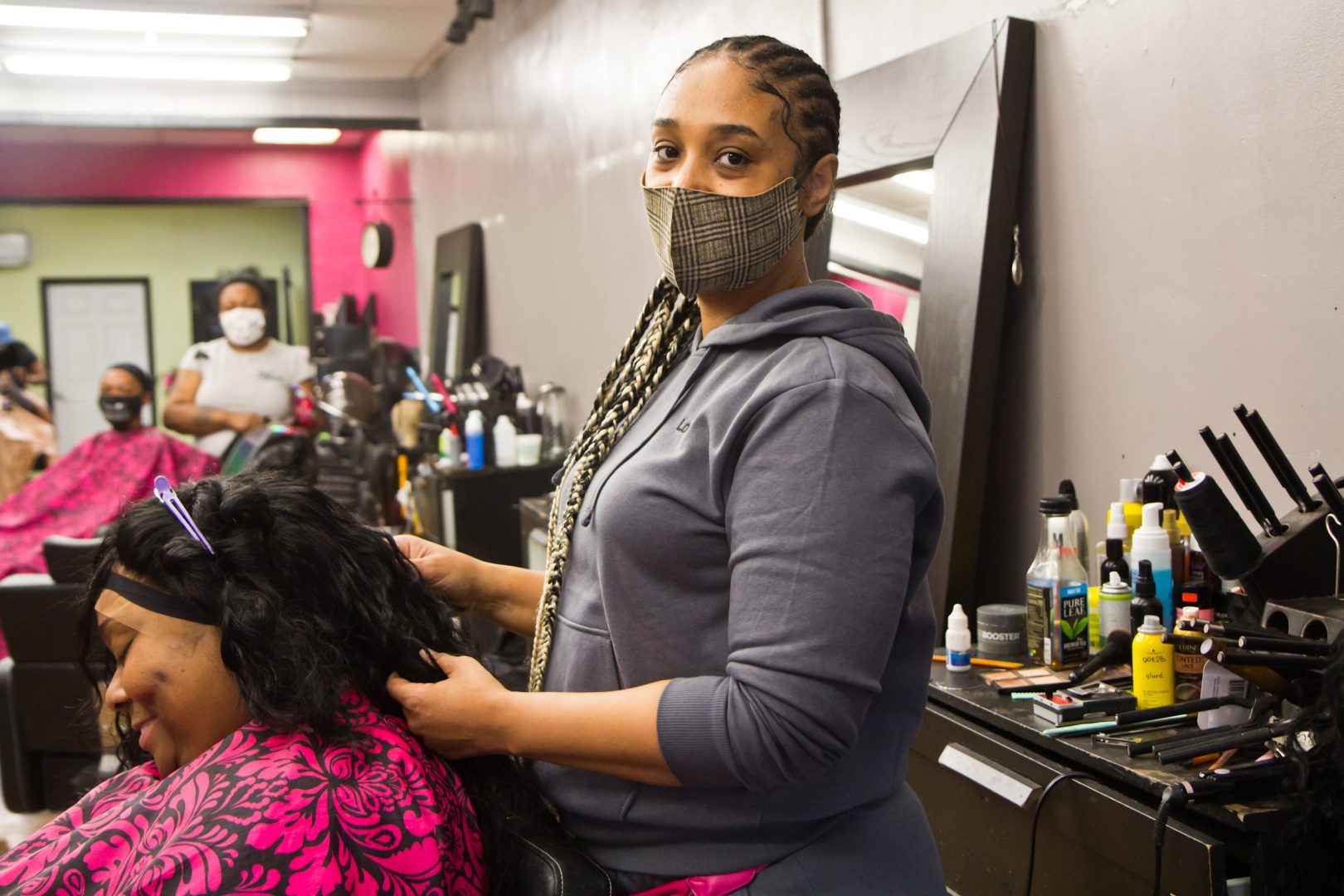 Cericka Womack is the owner of Phusions Beauty Salon in Chester, Pa.

(Chester) — After passage of a $1.9 trillion stimulus package, the first major legislative victory for President Joe Biden, he headed to one of the places that helped get him into office: southeastern Pennsylvania.

Specifically, he came to Chester to visit Smith Flooring, a Black-owned business with a unionized workforce that received Paycheck Protection Program loans earlier in the pandemic and will qualify for additional benefits under the newly passed federal stimulus, including a tax credit designed for employee retention.

“People hardest-hit are in minority communities,” Biden said during his visit to the majority-Black Delaware County city. “The rate at which they get COVID is higher, death rate is higher.”

In the hours before the president was set to swing through Chester, local business owners waited restlessly to see if he might stop by, ducking in and out of each other’s shops to exchange tips about the visit.

On Avenue of the States, one of Chester’s main streets, Emmanuel Fitzpatrick, 48, was stationed outside his studio space with two of his friends and artistic collaborators, Kenneth “Picasso” Hunt and Devon Walls.

Fitzpatrick and Hunt were working on paintings — Hunt’s an abstract, and Fitzpatrick’s a portrait of Biden. They support the new president, though Fitzpatrick noted “it’s too early right now” to know exactly how he’ll do. 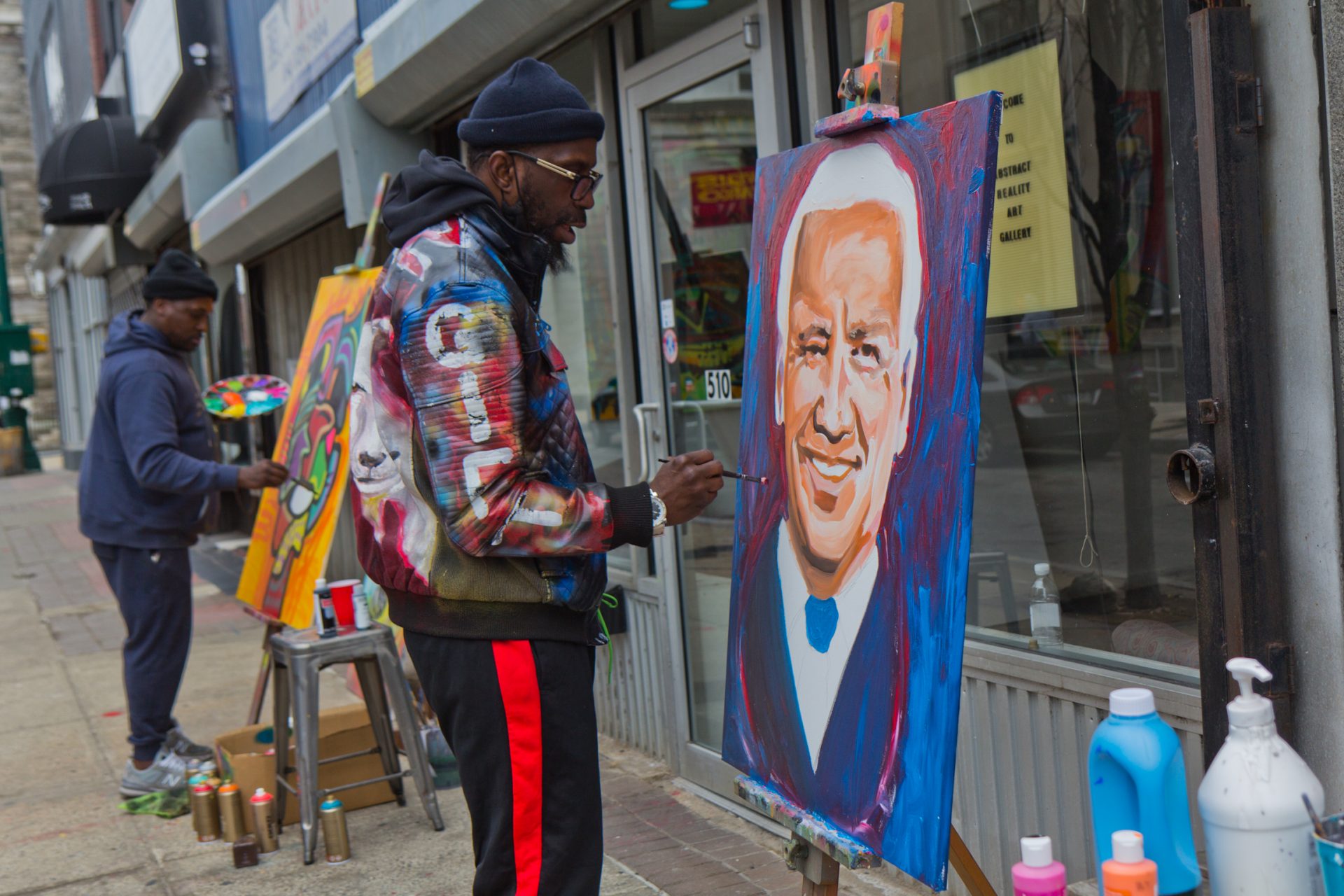 Biden hopes this trip, which is part of a broader communications strategy including Vice President Kamala Harris and first lady Jill Biden, shows people that he is doing something.

Under the stimulus plan, Pennsylvania stands to get about $7.3 billion for statewide expenses. Local governments, like Chester’s, will get their own shares — about $5.7 billion altogether.

One of the most profound changes under the law is a new tax credit for families with children. For the next year, the program will give parents $300 per month for each child under six, and $250 monthly for children under 18. Those payments begin to decrease for individual filers who make more than $75,000 a year or couples who make more than $150,000.

There are also specific benefits for businesses — the main talking point in Biden’s Pennsylvania visit. The existing Paycheck Protection Program will be re-upped with $7.25 billion, though competition for that money may also increase, as larger nonprofits are now eligible.

Along with an extension to the employee-retention tax credit, which gives businesses per-employee tax breaks if they had significant revenue declines, other new tax credits include one that gives businesses benefits if they hire people who were unemployed during the pandemic.

Biden recently said he thought former President Barack Obama was too modest about the 2008 relief package, and should have taken “a victory lap” so people better understood its impact. 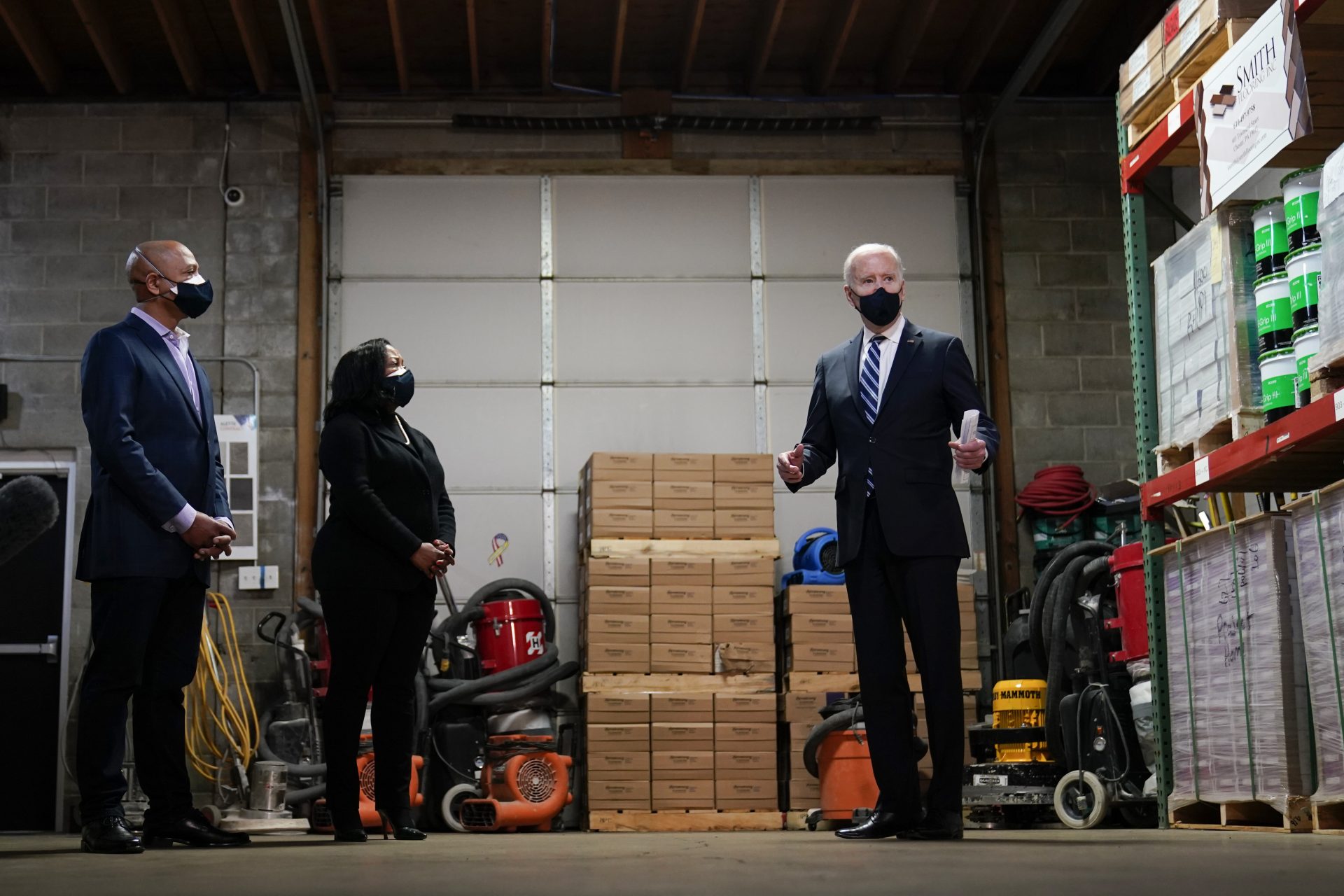 This time around, Fitzpatrick said he knows what he’s getting. And he has more specific hopes: namely, that stimulus dollars make it easier for Chester residents to start their own businesses.

The entrepreneurial spirit is a big deal in Chester, a formerly industrial city of 34,000 that has been facing declining population and loss of local businesses for decades. It was also hard-hit by the pandemic. Last summer Chester was put into receivership, a process by which the state takes direct control of a city’s finances in hopes of helping it avoid bankruptcy.

On Avenue of the States, though, there’s a stubborn optimism about Chester’s future.

Walls, 25, would prefer not to focus on blighted buildings or the city budget — topics that have dominated discussion about the city for his entire life. Instead, he notes that this strip of Chester is a success story: Black entrepreneurs own a lot of the buildings on the street and fewer are now left vacant.

“You got a business district that’s owned by the people from the community, that’s rebuilding the community,” he said. “They’ve opened up restaurants, galleries, clothing stores, everything with ownership in mind. They employ people in the community.”

On Tuesday afternoon, Cericka Redd, who owns Phusions Salon, was at work doing Tanya Powell’s hair. The shop was bustling, with several children playing between the chairs.

Redd, who was born and raised in Chester, said there have been times the city has felt like “a ghost town.” Things seemed better before the pandemic, with the arts scene booming and storefronts filling up. Then everything had to close and she worried it might all go away.

“It’s a blessing to us all to have something, to have somebody recognize that we did lose things, and try to help us get back,” she said of the stimulus.

She says having a thriving business corridor is about more than personal financial stability. 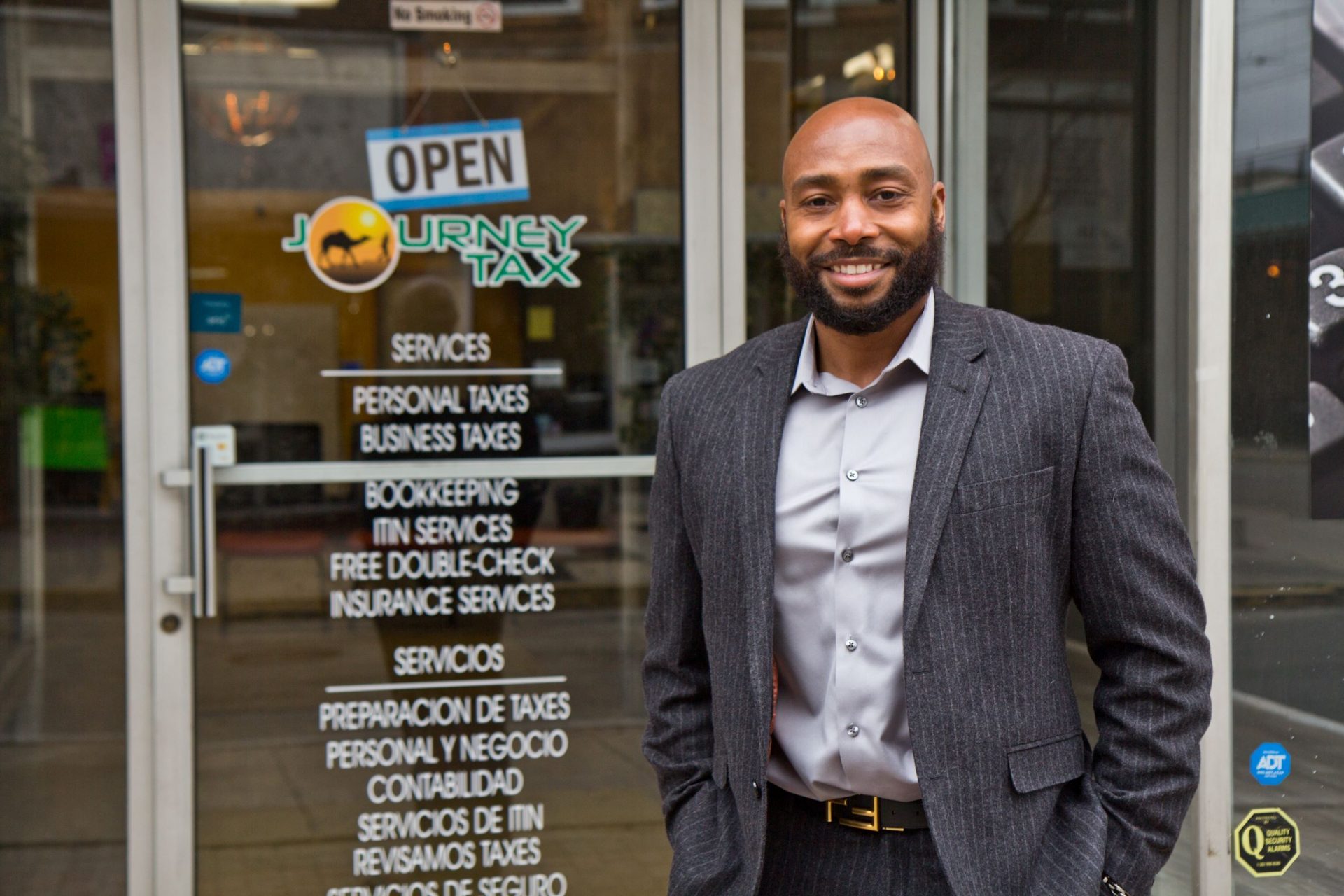 Roland Taylor is the owner of Journey Tax in Chester, Pa

“At night, it’s really dark,” she said. “The businesses are spaced out. It just felt lonely a little bit. Having more people on the streets — you can gather more, talk more, communicate.”

Down the street from the salon is Jonathan Abdur Rahim King’s store, R&N Enterprises. It sells a mix of boutique fashion, traditional Islamic clothes, and wellness goods, like specialty soaps and toothpastes.

King has had a lot of jobs in his life, and even now, the store is one of several ways he supports his family. But it’s a passion of his, and he says for himself and a lot of other Black entrepreneurs he knows, getting straightforward assistance is a lifeline. Black-owned businesses have so far gotten disproportionately less aid.

“To have a little head start, a boost, it’s a really great opportunity for you to blossom in your business,” King said. “It’s hard for a Black businessman to get loans from the bank … you end up getting turned down most of the time.”

King and several other business owners note, they were already doing their level best to make it through the pandemic before this new round of stimulus money came through. Help is welcome, and King is happily displaying Biden hats in his window. But he’s also wary that the stimulus is too good to be true.

“I’m 55 years old, I never saw nothing like this before, he said. “We’re spooked about somebody giving us money.”