Screenshot of the Lehigh Times, one of 45 local news websites run in Pennsylvania by Metric Media, which has been found to fail basic journalistic standards for trustworthiness and credibility, according to a new report.

Both Republican and Democratic groups are seeking to exploit the growing void in local news through outlets that fail basic journalistic standards, according to a report by NewsGuard. 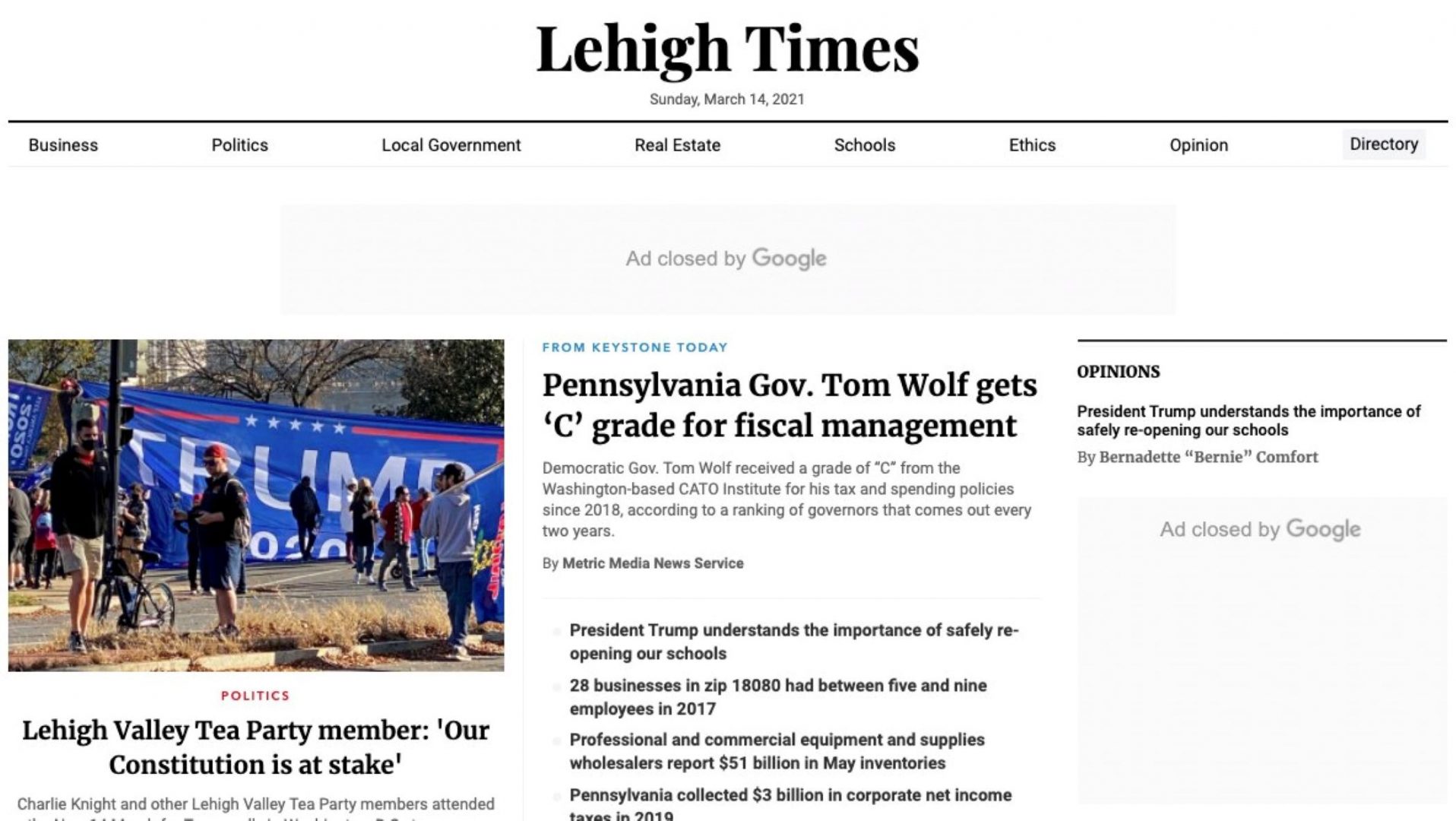 Screenshot of the Lehigh Times, one of 45 local news websites run in Pennsylvania by Metric Media, which has been found to fail basic journalistic standards for trustworthiness and credibility, according to a new report.

(Harrisburg) — The majority of news outlets in Pennsylvania rank high on trustworthiness, but there is a growing crop of digital sites with ties to both Democratic and Republican groups that are taking hold in the state with few, if any, disclaimers about their partisan motives.

In total, 70% of the 160 local news organizations reviewed in the state were determined to be highly credible, slightly above the nationwide average, according to the Pennsylvania News Trust Report by NewsGuard, a nonpartisan media rating organization.

Of concern, however, is the remaining 30 percent of organizations, which includes partisan-funded local news sources that threaten to erode trust in local news, according to the report. They’re part of a new wave of websites designed to look and feel like hyperlocal outlets, but with undisclosed sources of support, rampant conflicts of interest, and “highly slanted coverage” that strongly reflects the political leanings of their funders, the review found.

And those partisan ties span both sides of the political spectrum.

“If every person when they click on a link thought for a second before believing the information and asked themselves: Have I heard of this source? Do I know anything about it? Is this an actual, credible news operation?” said Matt Skibinski, the author of the report and NewsGuard general manager. “That would be one of the ultimate solutions.” 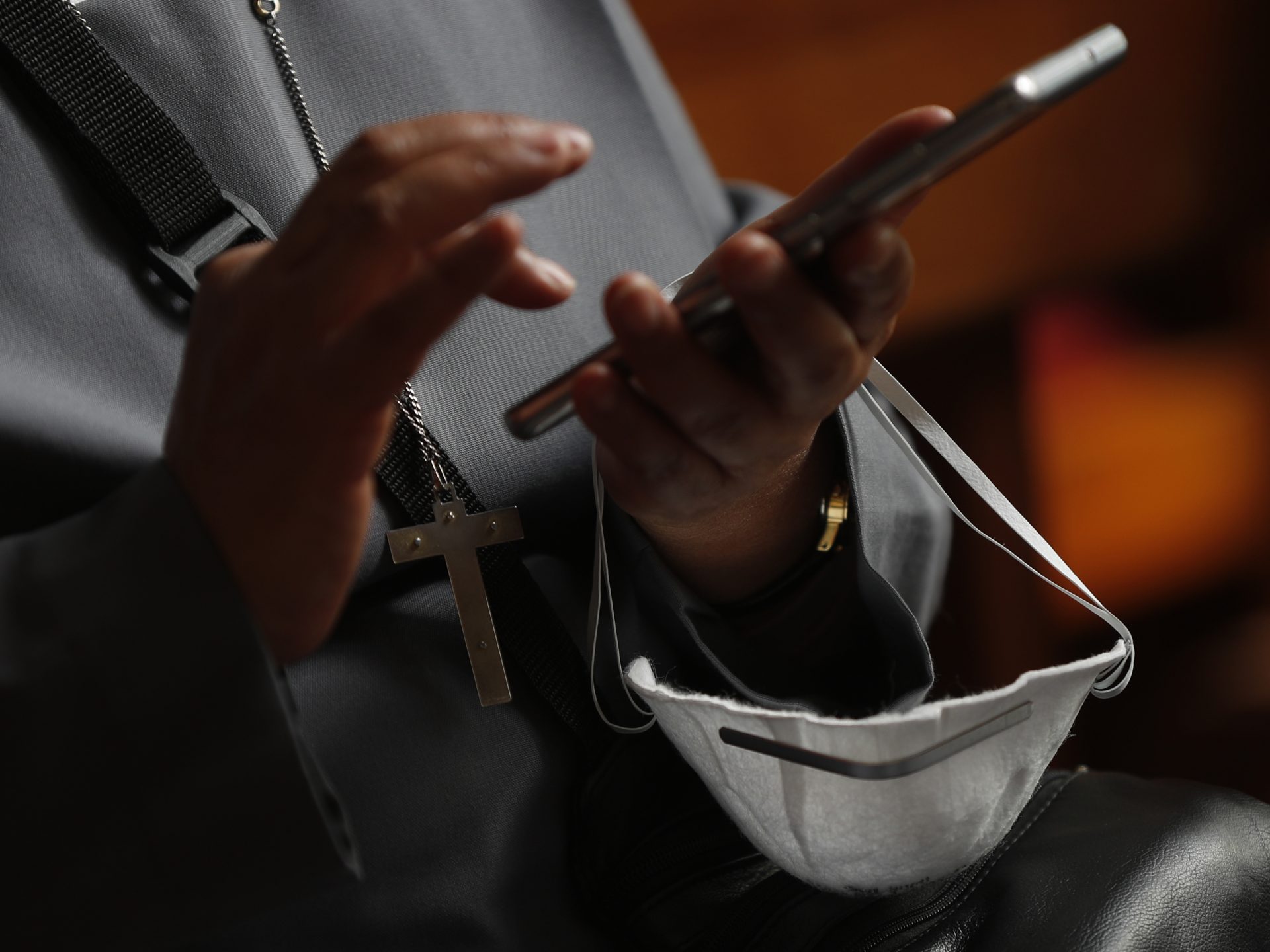 “Together, let’s reject the lies and nonsense out there,” U.N. Secretary-General António Guterres said Tuesday, referring to rampant misinformation about the COVID-19 pandemic. Here, a nun holds her phone and a protective face mask in La Paz, Bolivia.

One news group, run by Metric Media, operates 45 local websites in Pennsylvania, many of which appear similar to credible news sources in their communities. But they fail nearly all of NewsGuard’s basic journalistic standards, the report found.

The sites are part of a nationwide network run by a conservative political consultant, the report said, and have been found to publish “coverage that is ordered up by Republican groups and corporate PR firms,” according to The New York Times.

But you wouldn’t know that by visiting the websites. For example, the “About Us” page of the Lehigh Times, which closely resembles the highly credible lehighvalleylive.com, says it was created “to fill the void in community news after years of decline in local reporting” and that its approach is to “provide objective, data-driven information without political bias.”

NewsGuard’s review of the site’s content, however, found highly slanted coverage in favor of Republicans and in criticism of Democrats. The report also found the network of sites recently published a series of stories on the impact of COVID-19 restrictions on the hotel industry without disclosing that Metric Media’s CEO, Bradley Cameron, has ties to hotel owners.

“When we looked [at those sites] over a period of time, we saw a large number of articles about imposing lockdown restrictions on hotels,” Skibinski said. “Then we looked at the website of an organization [Cameron] is associated with and in his bio on that site it revealed he was basically doing lobbying or consulting work [for members of the hotel industry].”

Cameron did not respond to questions from Spotlight PA about this finding.

In another example, The Keystone, which began publishing in February 2020, describes itself as “a local news site for Pennsylvania” that was started because the “decline of local news around the country has negatively impacted civic engagement.”

But The Keystone is part of the Courier Newsroom group owned by the Democratic advocacy organization Acronym, which, on its website, says it has “helped elect progressive candidates across the country” and describes its work as running “dozens of targeted media programs to educate, inspire, register, and mobilize voters” to vote for those candidates, according to the report.

“In other words, Acronym’s goal is not to produce quality journalism—it is to win elections for progressive candidates,” the NewsGuard report said.

The Keystone acknowledges Acronym’s involvement on its “About” page but insists on its editorial independence. But that message was undermined by Acronym’s own draft business plan, which outlined a mission “designed to drive strategic narratives to key audiences” with sites like The Keystone, per a copy obtained by Vice News. The draft also quotes Acronym CEO Tara McGowan as saying “news” content is a better way to reach voters than campaign ads.

McGowan serves as CEO for both Acronym and Courier Newsroom, the report said.

Kristofic said she believes it’s the failure of traditional media outlets to represent more viewpoints and demographics that has given an opening to outlets like hers, adding, “I think a lot of people feel traditional media, whether their local newspaper or local TV station, doesn’t serve them and doesn’t provide the information they want, and so they go looking for outlets that do.”

But The Keystone’s robust presence on Facebook, where it has more than 11,000 followers, and its advertising there appear as little more than Democratic Party campaign ads. The Keystone alone spent more than $1.27 million on Facebook ads, largely promoting Democratic candidates and criticizing Donald Trump, during the 2020 election cycle, according to the report.

A case study on the Acronym website boasted that the group “softened the ground” for a Democratic victory in 2020 using “ads and boosted news.”

“We found that paying to promote news articles on Facebook to low-information audiences was most effective at increasing Trump disapproval,” the case study said.

The NewsGuard report was commissioned by The Lenfest Institute for Journalism, the nonprofit owner of The Philadelphia Inquirer. The Institute also provides funding for Spotlight PA. Jim Friedlich, the institute’s executive director and CEO, said the report underscores the need for “communities, foundations, local advertisers and individual readers to continue to fund real, independent, fact-based journalism.”

“The forces of disinformation are well-organized, well-funded, and have no desire to stick to facts,” Friedlich said. “There are deep-pocketed forces on the other side of truth that we need to combat. Beyond the political forces — both right and left — behind it, disinformation thrives because of the social media platforms on which it spreads and because of the advertisers who help fund it.”

The NewsGuard report also examined the top sources of news, regardless of location, about Pennsylvania based on social media presence. Of the top 1,000 sites with the most engagement on their Pennsylvania-related news, only 13.7% failed NewsGuard’s basic standards for trustworthiness. But those sites accounted for 25% of the total social media engagement, meaning their false or misleading coverage performed disproportionately well on Facebook and Twitter.

The review also found that credible news organizations can do more to set themselves apart from partisan efforts, including better disclosure of ownership and financing, as well as who is in charge of editorial content, and clearly and transparently correcting factual errors.