Tiffany Husak, left, a nursing student at the Community College of Allegheny County, receives her first dose of the Moderna COVID-19 Vaccine, during a vaccination clinic hosted by the University of Pittsburgh and the Allegheny County Health Department at the Petersen Events Center, in Pittsburgh, Thursday, Jan. 28, 2021. The clinic, staffed by Pitt faculty and students from Pharmacy, Nursing, Medicine, and Health and Rehabilitation Sciences, will vaccinate some 800 personnel, over two days, who are work in healthcare roles, including students from Chatham College, Community College of Allegheny County, Duquesne University, LaRoche University, Pittsburgh Technical College and Pitt who work with patients. (AP Photo/Gene J. Puskar)

‘Don’t hold back any doses’: How a conference call with the Pa. Health Department led to vaccine delays

Health systems believed they were following state orders when they used vaccines that were supposed to be set aside for people awaiting their second doses.

This story has been updated to include the entire statement provided by the Hospital and Health System Association.

(Harrisburg) — Medical providers were following instructions from the state when they gave Moderna COVID-19 vaccines earmarked for people awaiting their second doses to people in line for their first doses, according to the group representing Pennsylvania health systems.

“Hospitals complied with the Department of Health’s orders to not hold back any vaccine doses, and to get shots into as many arms as possible,” Hospital and Health System Association of Pennsylvania spokeswoman Rachel Moore said in an email.

Both the Moderna and Pfizer vaccinations require two doses to be effective. People who got the Pfizer vaccine are not affected by this issue.

Penn State Health was on a conference call about two weeks ago, during which, according to spokesman Scott Gilbert, the health department “specifically directed providers to not hold back COVID-19 vaccine doses for second vaccinations.”

The department told providers additional vaccines “would be made available for use as second doses,” Gilbert said. “Penn State Health followed this directive, as it has all [ health department ] guidance since vaccines initially became available in Pennsylvania in December.” 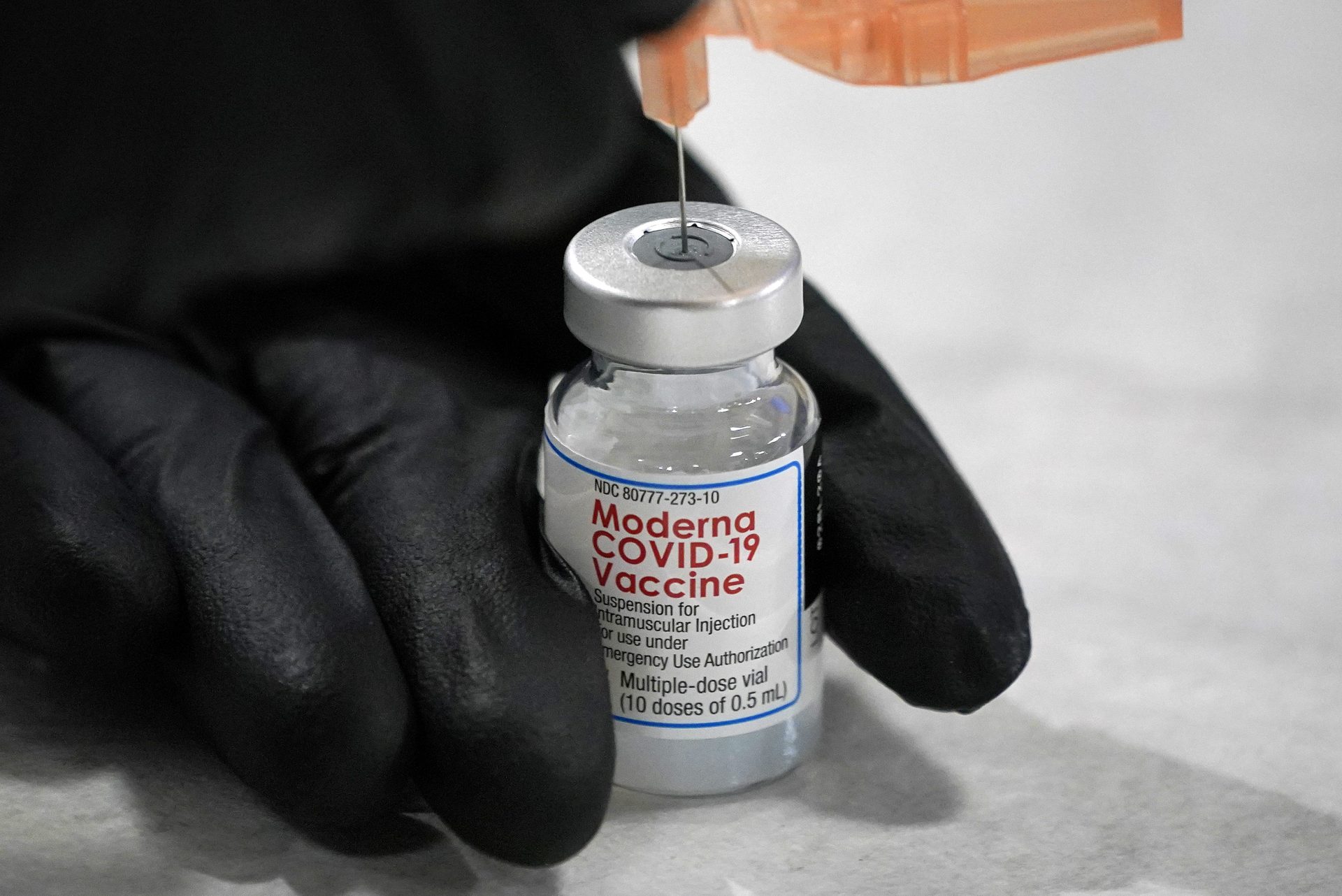 University of Pittsburgh Pharmacy student Edith Wang loads a syringe with a dose of the Moderna Covid-19 Vaccine, during a vaccination clinic hosted by the University of Pittsburgh and the Allegheny County Health Department at the Petersen Events Center, in Pittsburgh, Thursday, Jan. 28, 2021. The state has allocated some vaccine vials to be used as first doses or second doses. Those vials are all chemically identical. (AP Photo/Gene J. Puskar)

Department of Health spokesman Barry Ciccocioppo confirmed that Executive Deputy Secretary Keara Klinepeter participated in a call with providers hosted by the Hospital and Health System Association about two weeks ago.

He said it has been a “common refrain” from department officials to tell providers not to hold back first doses.

“She believes that she shared the standard refrain,” Ciccocioppo said.

He said he did not know exactly what Klinepeter or others told providers.

“I do not have a recording of that call to know if the statement you have in quotes is an accurate accounting of what was said or who said it,” he said. “In the interest of transparency I am offering you the best recollection of what may have happened.”

The health department had emphasized not to hold back vaccines because it was concerned some providers were setting aside first doses, Ciccocioppo said earlier.

The department is still working to determine the extent of the problem. There are dozens of providers in the commonwealth. In checks with several of them, Rite-Aid and Geisinger said they are not affected because they hadn’t used any second-dose vaccines as first doses. University of Pittsburgh Medical Center, WellSpan Health and Lancaster General Hospital did not respond to requests for comment.

The health department had not issued written instructions to providers on how to use the vaccines, but it will do so now, Ciccocioppo said.

Additionally, the department plans to hold daily calls with vaccine providers, instead of one per week.

“We are course correcting and implementing abundant controls to protect against this moving forward,” Ciccocioppo said. “The providers must be our partners in implementing this solution, or step away from administering vaccine.”

As many as 100,000 people will face delays in getting their first or second shots as a result of the miscommunication, the department estimated. The state plans to reroute some first-dose vaccines to people who need their second shots over the next three weeks.

It’s okay to wait up to six weeks after the first shot to get the second one, according to the Centers for Disease Control and Prevention. The state assures people whose second doses have been delayed that they will get them within that window. Providers will contact people if they need to reschedule appointments.

Snowstorms and weather-related power outages in parts of the southern U.S. are adding to delays.

“Earlier this week, hubs from which vaccine is distributed were significantly affected by winter weather,” the department said Friday. “Moderna vaccine was not shipped from the distributor on Monday, Tuesday, or Wednesday of this week. The CDC is working with shipping partners to resume shipments as quickly as possible.”

Pfizer vaccines also were not sent out Monday, while “a limited amount” were shipped Tuesday and Wednesday.

State and counties say they plan to do more to inform Pa. Spanish-speaking voters