Latino leaders in Pa. work to build trust in vaccines. 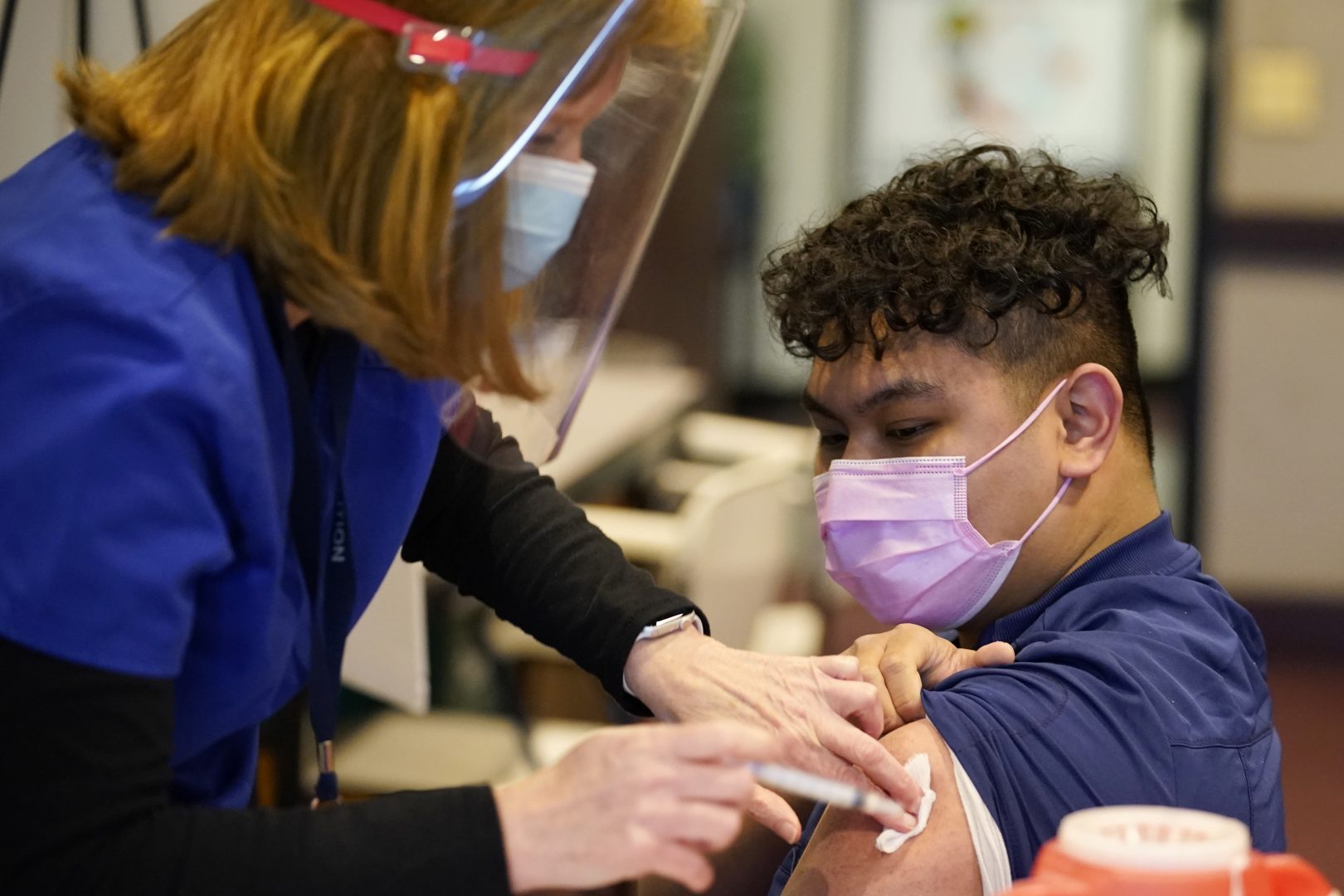 (Reading) — When Delfin Vasquez got his first dose of the Moderna coronavirus vaccine in January, he made sure to post the news on Facebook for all of his friends to see.

“I am highly aware we need to vaccinate a large percentage of the population to stop the spread, just as we did with other terrible diseases,” his post read in Spanish above the video of him taking the jab in the arm. “I INVITE YOU TO GET VACCINATED”

Vasquez and several other visible figures in areas in Pennsylvania with Latino populations have been using their strongest assets to build trust among their community — social media and personal experience.

Heads of civic groups, nonprofits, doctors and everyday people try to summon a zeitgeist they hope can save their community.

Latinos with large networks that span from policy makers to field workers are trying to instill trust in the COVID-19 vaccines. This is at a time when the state’s vaccine roll-out efforts have come under fire for a slow and sometimes cumbersome distribution process.

As the vaccine distribution is open to seniors, medical professionals and other classes of workers, people like Vasquez are setting an example.

“Consistent with our messaging”

Vasquez is the president of Dominican Association of Pennsylvania. By posting news of his vaccination online, Vasquez said he hopes he can dispel anxieties around the vaccine and inspire others to be inoculated.

“Many times, due to ignorance, there are some people who scare others [from taking the vaccine,]” Vasquez said in Spanish.

Vasquez said it is important to drive home the point that any short-term side effects from the shot are better than that person or a loved one ending up in a hospital bed.

But social media is a double-edged sword, and misinformation and conspiracy theories about the vaccine spread in Spanish just as quickly as in English. An added obstacle is that sometimes even accurate information can pertain to other countries and thus be misleading to someone living in the U.S.

Recent posts about the vaccine on the Facebook pages such as “Latinos De York” and “Latinos De Allentown” received comments from people who object to taking the vaccine.

Some said they are suspicious of a vaccine created in less than a year, others said the vaccine was part of a “satan plan” and others promoted holistic prevention rather than inoculation.

A study published in December by the COVID Collaborative showed a third of Latinos expressed complete trust in a coronavirus vaccine. A study published last month by the nonprofit health organization KFF, or the Kaiser Family Foundation, found that 71 percent of Latinos said they would “definitely get” or “probably get the vaccine.”

But there remains hesitation, according to the KFF study.

Young Latinos are more hesitant than older Latinos, according to the KFF study.

Mike Toledo, CEO and president of Centro Hispano in Reading, also shared his own vaccination process over social media. Centro Hispano staff are considered non-healthcare essential workers because it delivers hundreds of meals to senior citizens around the city, so Toledo and some his staff were offered vaccines.

Centro Hispano has steadily acted since the start of the pandemic as a news organization of sorts, providing government information in Spanish via Facebook. Centro releases English and Spanish-language videos answering frequently asked questions on the vaccine.

Toledo said their best available option is to propagate as much information and encouragement as possible about vaccination in ways that are easily consumable.

“We have to be consistent with our messaging,” Toledo said at the town hall. “At the Hispanic center, we’re utilizing multi platforms to get the message across, whether it’s our social media platform — which we’ve heard earlier, people are going more and more to for information — or through our radio platform, our radio show or our television show on BCTV.”

The Pennsylvania Department of Health’s vaccine roll-out has come under criticism from the community leaders for slow distribution, a vaccination location map that’s only available in English and registration issues. While much of the DOH’s website has an option to automatically translate pages, the state’s new Your Turn vaccine eligibility tool also did not have a translation option as of Thursday.

The DOH’s Office of Health Equity has identified some common barriers faced by Latinos and other vulnerable populations. The four most notable were transportation issues, lack of internet, language barriers and general access in rural areas.

It has made efforts to reach Spanish-speakers through translated materials and using Harrisburg-based communications firm Latino Connection to promote mobile testing sites in Latino neighborhoods.

“Additionally, the DOH COVID-19 Health Equity Response Team, made up of state agencies and over 300 community partners, has worked closely with the Governor’s COVID-19 Taskforce on Health Disparities throughout all phases of the pandemic response which has a racial and ethnic minority committee that assists with approaches to contact tracing and testing plans, and now with vaccine distribution strategies,” a DOH spokesperson said in a statement.

Former Secretary of Health Dr. Rachel Levine in a December press conference said that part of looking at vaccination through a health equity lens means including custodial and other support staff in hospitals and care facilities. Doing so would include communities of color in those fields, she said.

But still there is perhaps the largest matter of all, which is who is afforded the vaccine and when it is available for them.

The state’s vaccination data website shows that Latino patients make up just under 1 percent of the more than 1,298,000 people who are partially or fully vaccinated.

But that figure itself is flawed. The state does not have ethnic information on more than 375,000 people who have received one or both shots. 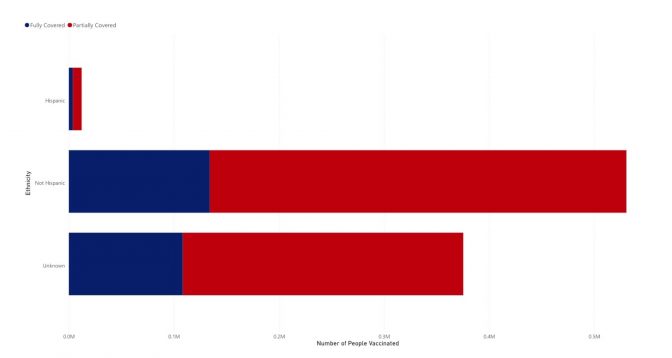 This screen capture taken Feb. 9, 2021, shows the number of Pennsylvanians vaccinated, by ethnicity.

Gov. Tom Wolf this week announced the establishment of a vaccine task force that will aim to improve the state’s vaccination efforts.

During the Centro Hispano town hall, Casey said the most critical issue beyond trust is the number of vaccines available.

He said he is looking to the Biden Administration to ramp up production and get more shots out to people willing to protect themselves.

“There’s no question that there are front line workers, folks who live in communities of color, who are doing front line work, have not gotten a vaccination and need to get a vaccination to do their work and to be safe,” Casey said. “We’ve got to produce a lot more vaccine, and get it out there real fast to get it into the arms of more and more Americans across the board, but especially those who are vulnerable and who may be on the front lines.”

Aside from his work with the Dominican American Association, Vasquez is also a health educator for Keystone Health’s Agricultural Worker Program.

The conditions and types of essential work Latinos do in agriculture and other fields put them more at risk, Vasquez said. They work in close quarters and at times without the proper protective equipment.

Workers’ immigration statuses and familiarity with the United States healthcare system and general access to accurate local information are all barriers to getting the community protected, Vasquez said.

Pennsylvania is still in its first phase of vaccine distribution. Agricultural workers are in the next phase.

In the lead-up to that phase, Vasquez said he hopes more people are vocal in pushing the vaccine and empowering Latinos to protect their community.

“Latino leaders have to guide our people about need to contribute to stopping this pandemic, to reduce the spread,” Vasquez said.

Having trouble viewing the map? View the full screen version