The proposal would increase the state’s personal income tax from 3.07% to 4.49% in the next fiscal year. 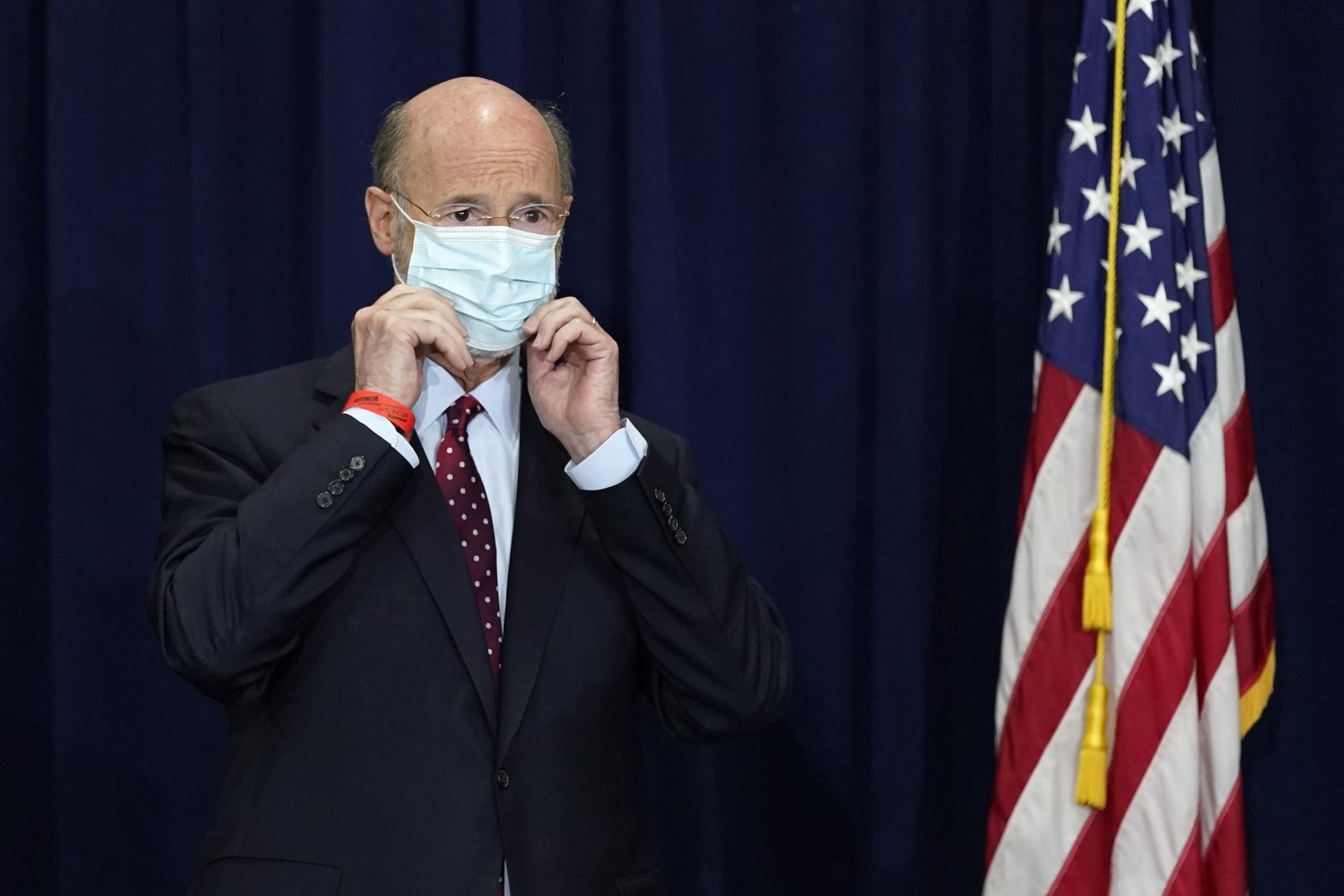 (Harrisburg) — Gov. Tom Wolf is proposing a major overhaul of public school finance, aimed at addressing resource inequities, that would be backed by a significant increase to Pennsylvania’s personal income tax.

A day before his scheduled annual budget address, Wolf’s outline of the fiscal plan is winning him plaudits from many education advocates, but few friends in the GOP-controlled legislature.

The proposal would increase the state’s personal income tax from 3.07% to 4.49% in the next fiscal year. About half of the new revenue would go to schools, and the rest would help fill in big, largely pandemic-induced budget gaps.

“We can have a great public school for every child in every neighborhood in Pennsylvania, good job opportunities for everyone who wants them, and an economy strong enough to provide for everyone,” Wolf said in a statement. “It is possible to pursue a legislative agenda for this commonwealth that is good for families, good for businesses, and good for the economy.”

Wolf has largely steered clear of proposing sales or income tax increases since his first budget cycle, in 2015, when he deadlocked with the GOP-controlled legislature and the two camps had a nine-month standoff before finally coming to an agreement devoid of broad taxes.

In the intervening years, Republicans haven’t softened to the idea.

“Raising taxes is not the answer to our problem,” House GOP spokesman Jason Gottesman said. “It’s a non-starter.” 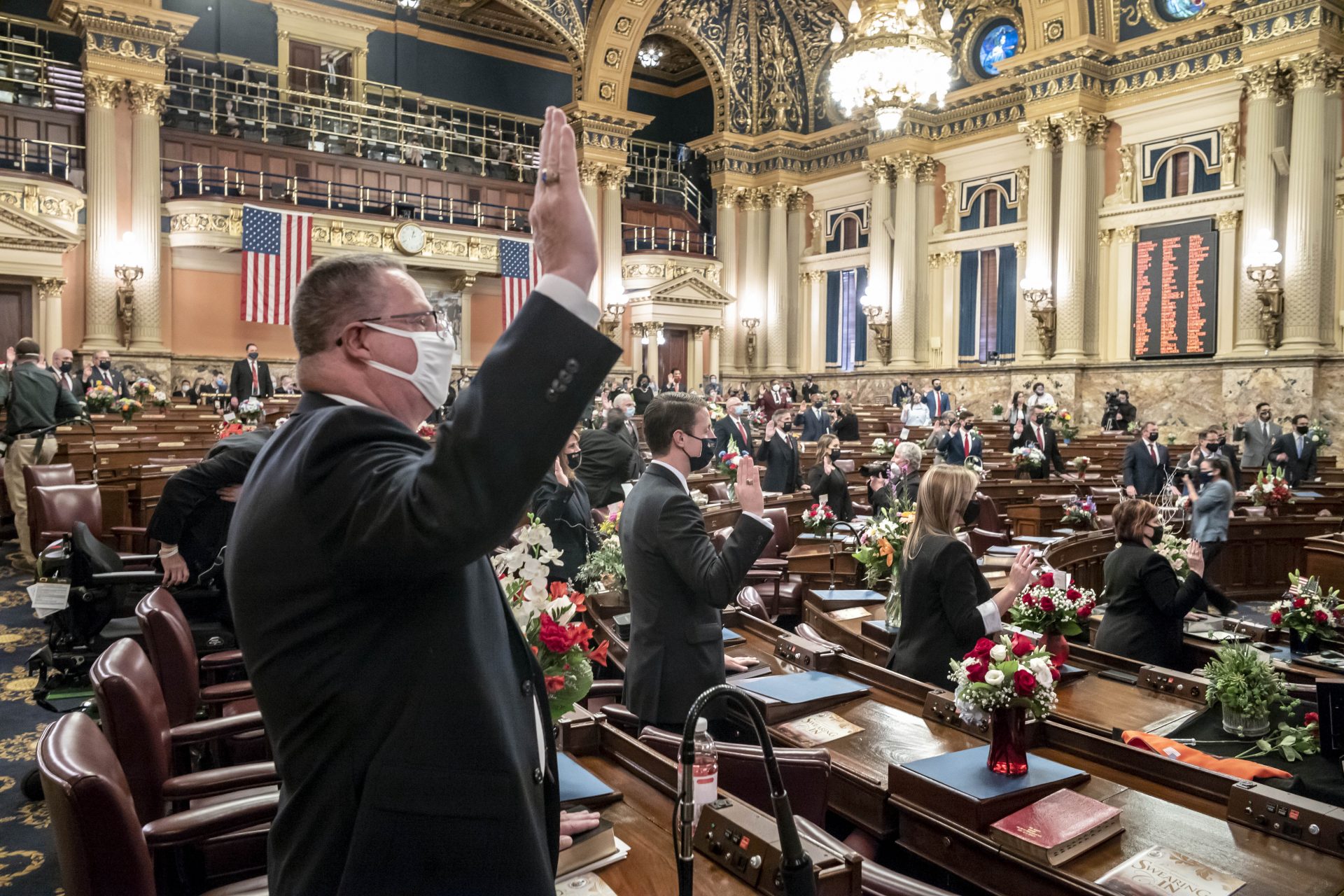 First term legislators of the Pennsylvania House of Representatives are sworn-in, Tuesday, Jan. 5, 2021, at the state Capitol in Harrisburg, Pa. The ceremony marks the convening of the 2021-2022 legislative session of the General Assembly of Pennsylvania.

Lawmakers haven’t increased Pennsylvania’s income tax since 2003. The commonwealth currently has one of the lowest rates in the country and is one of nine states that assesses a flat rate on all taxpayers — which means all earners have their income assessed at the same percentage.

That arrangement is explicitly guaranteed in the state constitution via a uniformity clause, which bars progressive tax structures that require higher earners to pay bigger portions of their income. And that clause is the reason why Wolf’s income tax proposal includes expanding an existing tax forgiveness credit in an attempt to give lower earners a break.

Wolf says the exemptions would make it so most Pennsylvanias would not see a higher tax bill.

Under the plan, single people would have their taxes completely forgiven if they make $15,000 or less per year. Married couples who make $30,000 or less would also be forgiven. Each dependent would add an additional $10,000 allowance to the salary calculations. As salaries go up, the level of forgiveness would go down.

A key salary under the plan would be $84,000. That’s the highest income level that a married couple with two children would be able to make without their personal income taxes rising.

Wolf presented the plan as a boon to low-income and working-class families, saying about 67% of Pennsylvanians would either have their taxes reduced or untouched. Republicans came to the opposite conclusion — Gottesman argued that $84,000 for a family of four is squarely middle class, as are even higher salaries.

“I don’t consider that to be the uber-rich who you often hear the left talking about needing to be taxed,” he said.

The median household income in Pennsylvania is about $63,000.

Democratic Appropriations Chair Matt Bradford, one of the legislative leaders charged with examining state revenue and spending, acknowledged that it will be difficult-to-impossible to pass any tax through the GOP-controlled House and Senate.

Also likely to hit a brick wall in the legislature are a slew of Wolf’s perennial proposals: legalizing and taxing adult-use cannabis, increasing Pennsylvania’s $7.25 an hour minimum wage, and a severance tax on the natural gas industry, among others.

“I think that this is the result of the governor not being able to come up with any original solutions to return Pennsylvania back to normal,” Gottesman said. “It shows just how much he’s not taking his responsibility … seriously.”

Republicans don’t have their own plan hammered out yet. Gottesman said they’re focused on getting vaccines out and reopening businesses, not finding new revenue. As an example of their approach, he pointed to efforts to disburse roughly a billion dollars in federal funds, and a bill that would task the National Guard with helping distribute the COVID-19 vaccine.

Bradford said his office has calculated that the revenue shortfall for the next fiscal year will be significant — somewhere between $2.5 and $3.5 billion — something Republicans don’t dispute.

Merely getting people back to work, he argued, won’t fix that.

“We would be foolish to not recognize the structural challenges that are in our budget, that in some cases frankly predate the pandemic,” Bradford said. 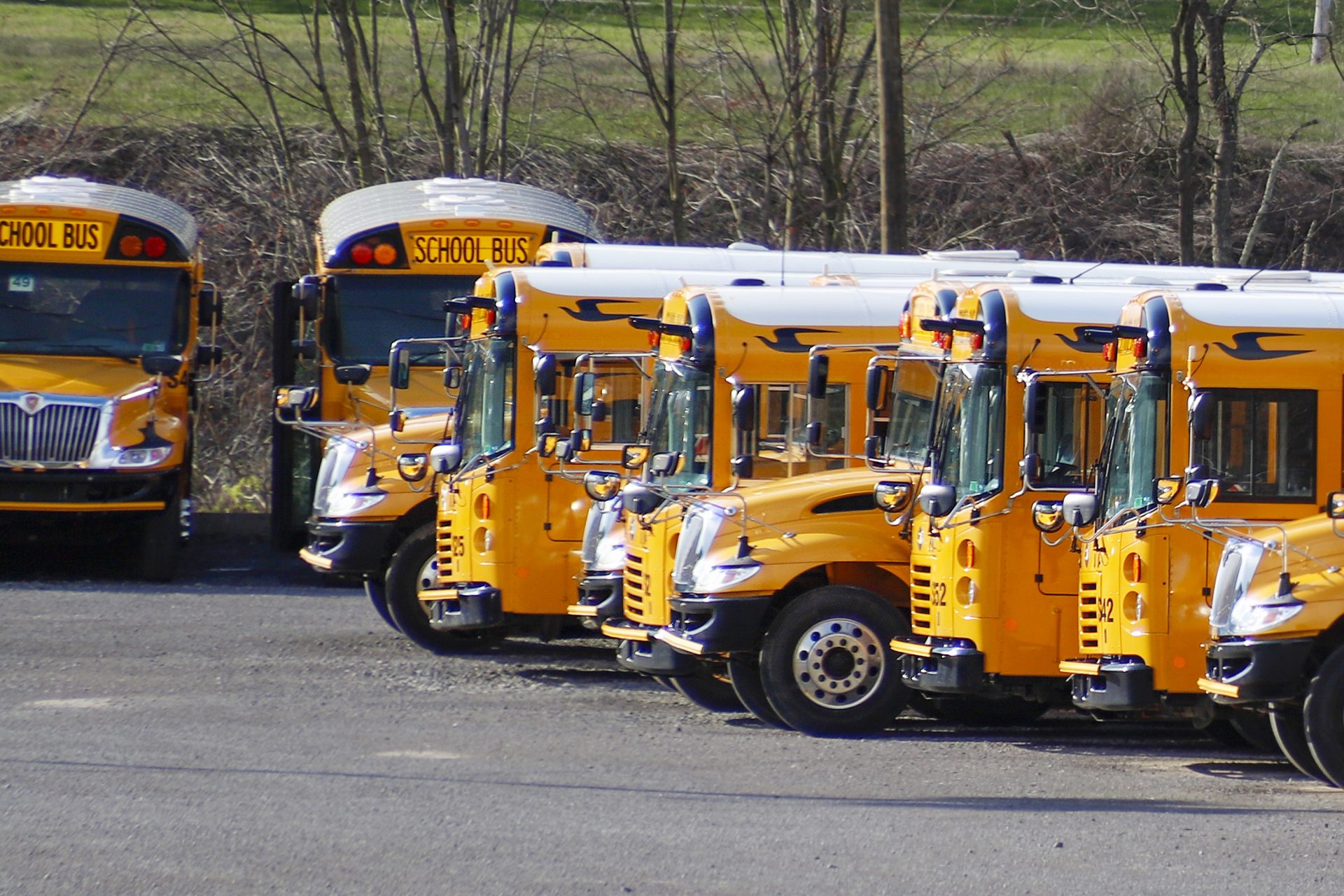 More money for schools, and a different distribution scheme

Wolf’s budget proposal includes a plan to dramatically reshape how most education money is distributed in the state.

The governor is calling for a $1.35 billion increase to the state’s basic education subsidy. That budget was about $6.8 billion this school year, unchanged from 2019-20.

In addition to this historically large ask, Wolf also wants to change how existing money is allocated, moving to route it through the student-weighted formula that became law in 2016.

Because the formula has only been applied to increases in aid since that year, Pennsylvania’s wide school resource disparities have remained very much baked into the system.

Currently, nearly 90% of the state’s basic education funding is distributed based on a ‘hold harmless” policy enacted decades ago that bars the state from funding school districts at levels lower than the prior year.

The move away from that policy “will ensure students in every community have the funding to succeed,” Wolf’s release states.

His proposal suggests using $1.15 billion dollars of the education budget to compensate school districts that would otherwise lose money through the change.

Attempts to fast-track school funding equity without making cuts to the many poor, rural districts that have benefitted from the hold harmless policy have been a third rail in Pennsylvania politics for years. Wolf’s plan to keep all districts whole hinges on passing a personal income tax increase to cover the difference.

“This is a giant step in the right direction,” said Deborah Gordon Klehr, executive director of the Education Law Center. “For years, our school funding system has allowed the students who need the most to get the least because of where they live. This proposal finally recognizes this reality.”

The Education Law Center was part of a coalition that organized a lawsuit against the state in 2014 in an attempt to force it to increase school funding. A trial scheduled for last summer was delayed by the pandemic. A recent filing by plaintiffs in the case estimates the state needs to grow its education budget by $4.6 billion to give schools enough resources.

Klehr said that, even in the unlikely event that the GOP-controlled legislature passes Wolf’s proposal, that case will continue.

“The magnitude of our student’s unmet needs is immense and growing by the day,” she said. “This laudable, impactful, bold, necessary proposal cannot by itself right those deep wrongs.” 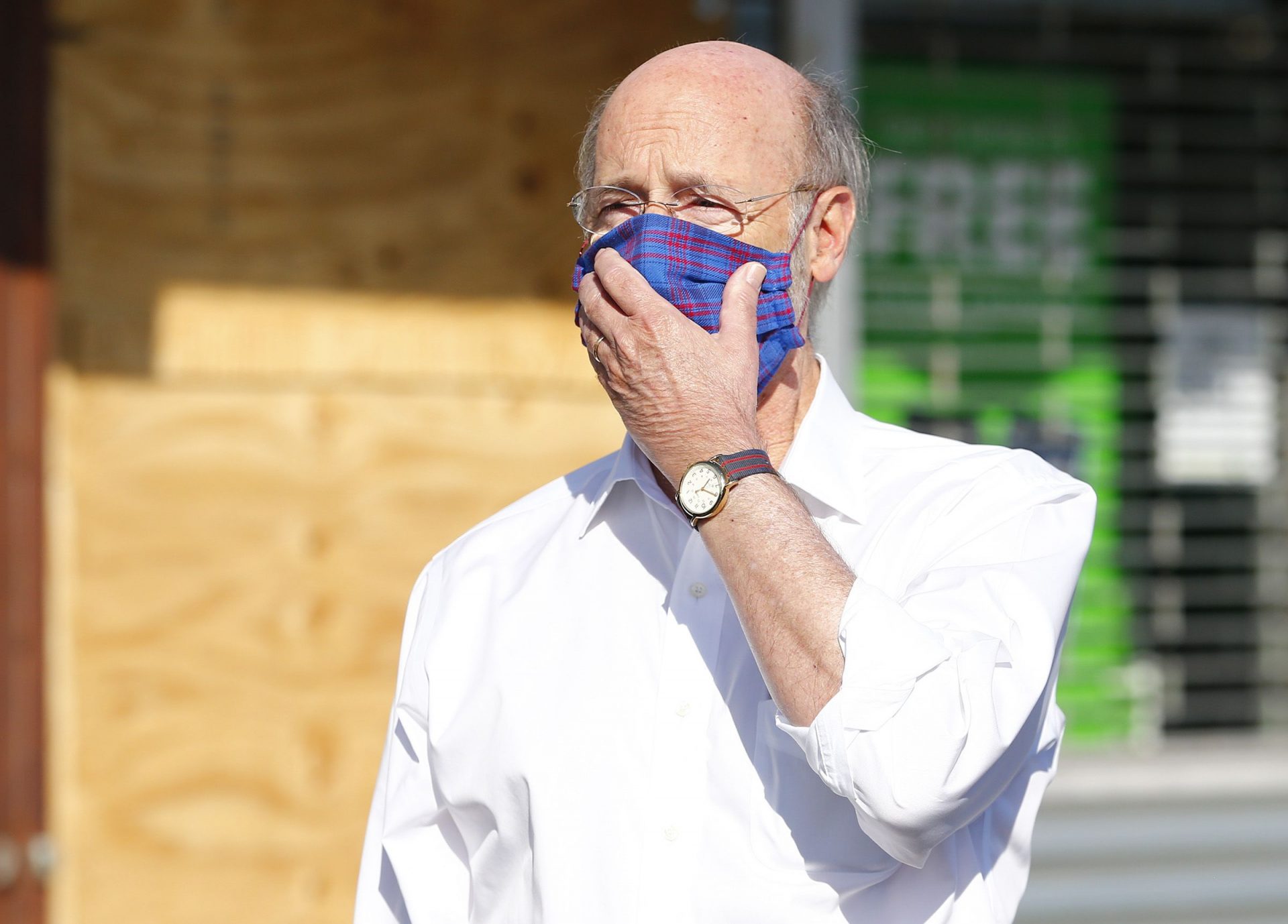 Gov. Tom Wolf said he was not experiencing symptoms.

Wolf says school districts across the state can save over $200 million by paying charter schools for special education students using the same formula that applies to districts, and by reducing the amount of money per student that flows to cyber charter schools.

Wolf has tried and failed to pass these reforms before, and charter advocates again reacted with frustration Tuesday, arguing it is inappropriate to cut any school funding during the pandemic.

“All schools are hurting right now,” said Lenny McAllister, CEO of the Pennsylvania Association of Charter Schools. “This is not the time to pit school districts versus charter schools.”

Currently, scholarship organizations can set aside up to 20% of the donation money for administrative costs. Most other states cap it at half that or less.

Wolf proposes capping it at 5%, claiming it would free up $36 million that could go towards tuition.

Advocates for the tax credit programs, which include Republican leaders, have long pushed Wolf to raise the cap on how much money can be funneled through them. Wolf has resisted dramatically expanding the credits, but has allowed them to grow during budget negotiations over the years.

Keisha Jordan is the executive director of the Children’s Scholarship Fund Philadelphia, an organization that benefits from the tax credits. On Tuesday, she said her organization currently sets aside 8% of donations for administrative costs.

“For smaller scholarship organizations that rely on that 20%, that will certainly be devastating to them,” she said.