Utah National Guardsmen are shown at the Utah State Capitol Sunday, Jan. 17, 2021, in Salt Lake City. The FBI has warned of the potential for armed protests at the nation's Capitol and all 50 state capitol buildings beginning this weekend.

Events remained quiet, despite some demonstrators bringing their guns to the protest.

(Washington) — Police were on high alert in state capitals around the U.S. Sunday, after warnings that pro-Trump extremists might attempt to storm legislatures similar to the assault on the U.S. Capitol last week. But at many statehouses and capitols, security and the media outnumbered protesters.

The streets were quiet in Washington, D.C., where police, the military and security agencies are intent on preventing any far-right groups from trying to disrupt President-elect Joe Biden’s inauguration on Wednesday. At least three people have been arrested in separate incidents at checkpoints, as the DCist site reports. Thousands of National Guard members are fortifying security at the Capitol and along the National Mall.

In Denver, the Colorado Capitol’s lower windows were covered in anticipation of possible unrest — but hardly anyone showed up on Sunday. “I’m really surprised. I figured there’d be more than this,” a supporter of President Trump told Colorado Public Radio.

In Lansing, where protesters swarmed Michigan’s Capitol building last May and a plot against the governor was uncovered in recent months, Sunday’s protest was deemed “eclectic, but small and dull” by Michigan Radio. Events remained quiet, despite some demonstrators bringing their guns to the protest.

In Georgia, a military Humvee was parked next to a statue of Martin Luther King, Jr., on the grounds of the statehouse in Atlanta. Some downtown streets were blocked off by dump trucks, Georgia Public Broadcasting reports. The outlet describes the mood in the city as a “tense calm.” 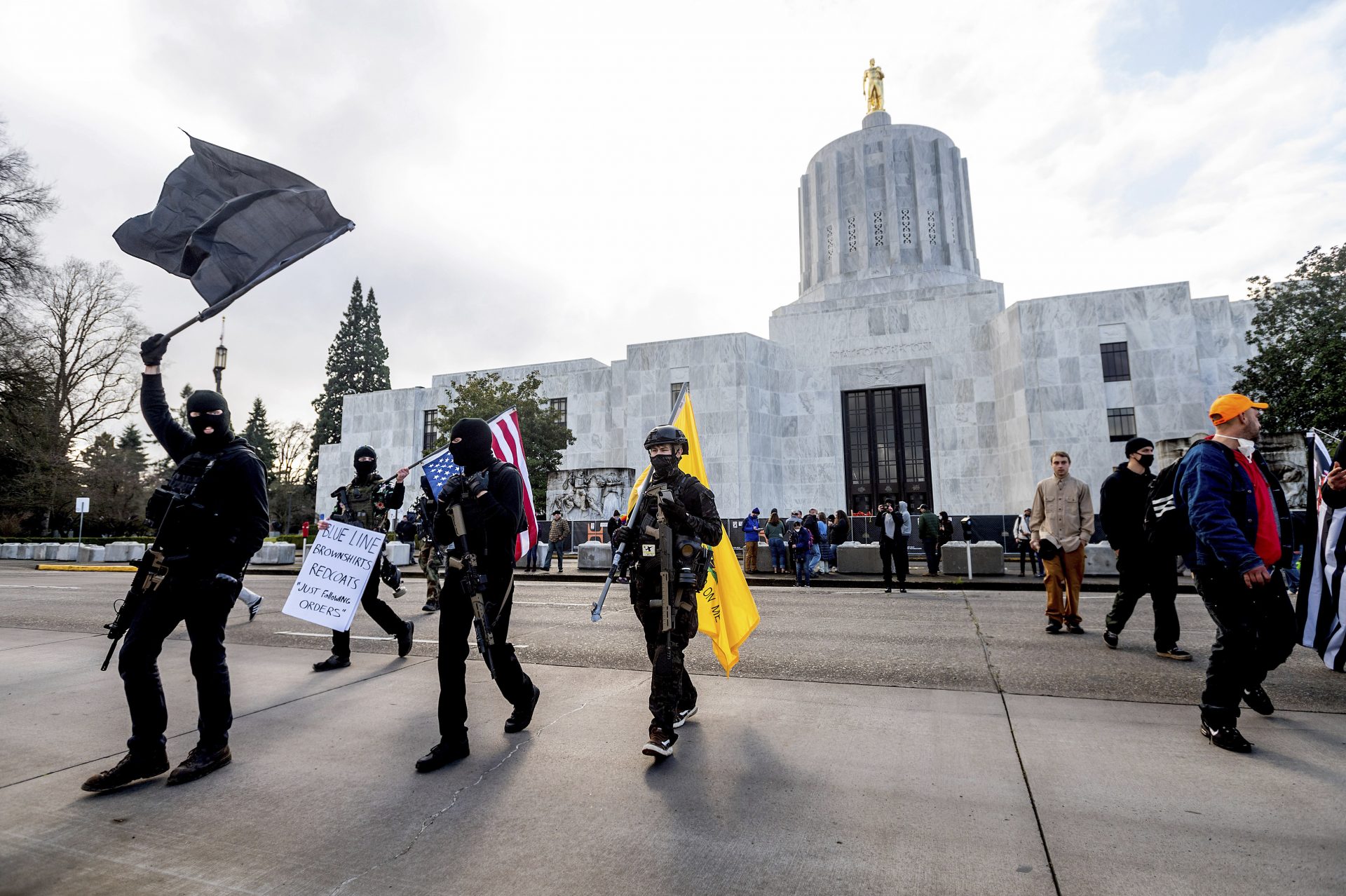 Protesters who identified themselves as Liberty Boys gather outside the Oregon State Capitol on Sunday, Jan. 17, 2021, in Salem, Ore. The group said they want reduced government and do not support President Donald Trump or President-elect Joe Biden.

There was “relative quiet at the Oregon State Capitol,” according to Oregon Public Broadcasting, despite the arrival of a small group of armed demonstrators. The group included members of the extremist “boogaloos” movement, who are known for advocating for a new civil war.

“A couple dozen armed demonstrators gathered at the Texas Capitol on Sunday,” member station KUT reports, adding that the group said they had come to spread a “message of individual liberty.” But not many people were around to hear it, as the grounds were closed.

In Florida, the Capitol in Tallahassee was mainly populated by a range of law enforcement agencies and journalists, according to member station WFSU — which reports a man as he rode by on a bicycle called out, “It’s a beautiful day! Nothing happening here!”

There are a number of possible explanations for the smaller than expected protests – including that some right-wing activists are reluctant to congregate at a time when police are looking for any sign of trouble and the FBI is vigorously seeking people to face charges related to the assault in Washington.

Federal authorities have made dozens of arrests around the country in connection with the violent insurrection in Washington, which left five people dead. More people were taken into custody over the weekend.

Some groups seem to want to wait things out, says Oren Segal of the Anti-Defamation League’s Center on Extremism. 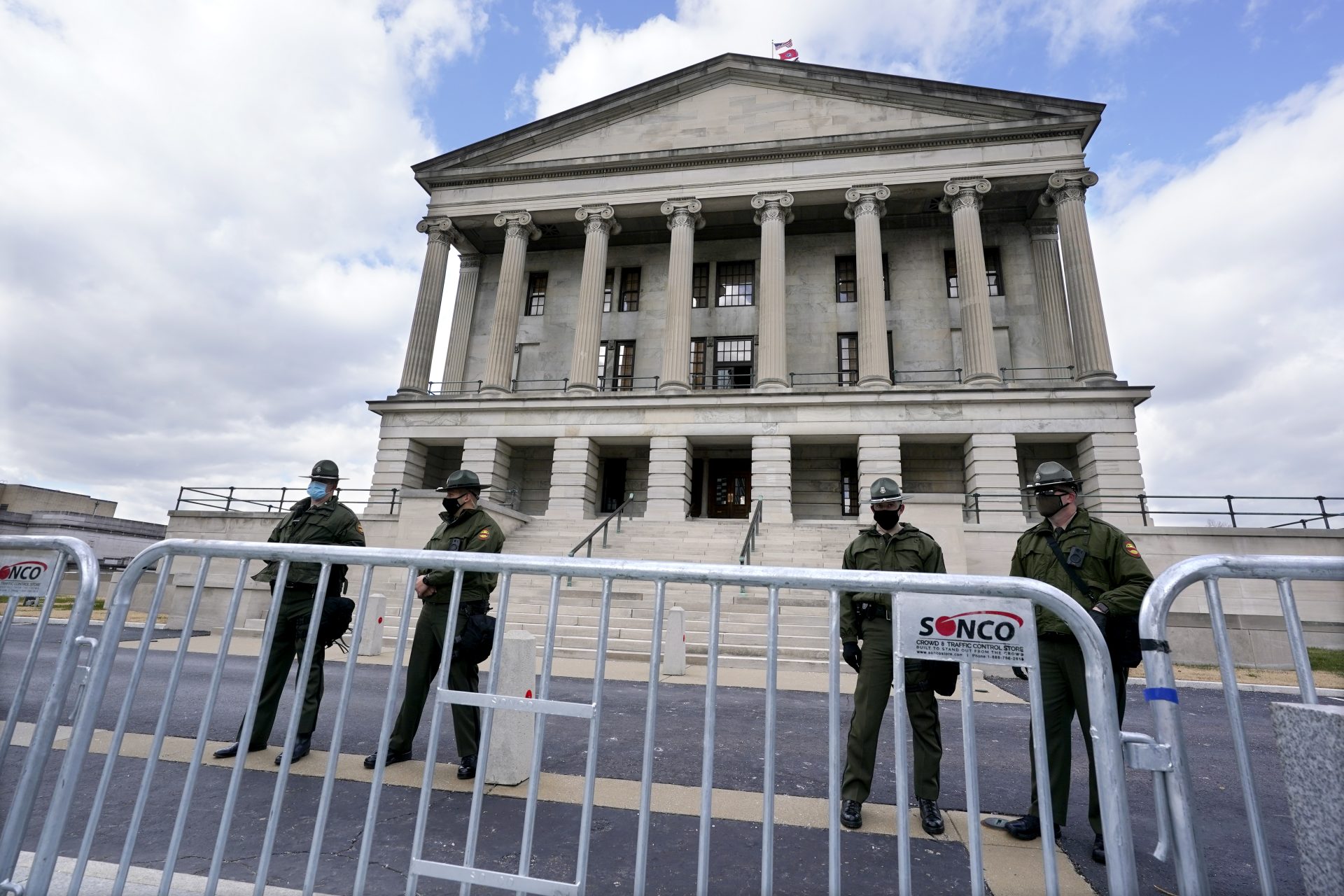 Tennessee State Troopers stand guard on the grounds of the State Capitol Sunday, Jan. 17, 2021, in Nashville, Tenn. The FBI has warned of the potential for armed protests at the nation’s Capitol and all 50 state capitol buildings beginning this weekend.

“I think people are spooked by the fact there have been many arrests,” Segal said. “I think in some cases, they think that the events that are planned are honey pots that are created to get them in trouble.”

The result, he adds, is that “we’ve seen a lot of pushback about actually showing up” at new protests.

Since the assault, social media outlets and tech companies have been making it more difficult for conspiracy theorists to repeat false claims that the Nov. 3 election was rigged, and that Trump was not truly defeated by President-elect Joe Biden.

A major blow to organizers and conspiracy theorists came last weekend, when Parler, seen as a conservative alternative to Twitter, went dark after Amazon stopped hosting its web site. Apple and Google also stripped Parler from their app offerings.

In addition, Facebook is targeting content with messages such as “stop the steal,” and Twitter suspended more than 70,000 accounts related to QAnon, the conspiracy theory group that some law enforcement agencies now deem a cult.

From Baked Alaska to a guy with horns: notable riot arrests