The House is expected to impeach President Trump a 2nd time. Here’s how it will work.

This time, though, impeachment could be bipartisan.

(Washington) — The House of Representatives is on track to impeach President Trump for the second time in 13 months — marking him as the only president to receive the rebuke twice in history.

This time, though, impeachment could be bipartisan. Republicans all opposed the House vote in December 2019, arguing that it was politically driven. But now some GOP lawmakers are joining Democrats at pointing the finger at the president for using rhetoric that helped spark a violent insurrection at the Capitol last Wednesday that left at least five dead.

The resolution states: “President Trump gravely endangered the security of the United States and its institutions of Government. He threatened the integrity of the democratic system, interfered with the peaceful transition of power, and imperiled a coequal branch of Government. He thereby betrayed his trust as President, to the manifest injury of the people of the United States.”

The House Judiciary committee released a report Tuesday evening that lay out the events of the stunning siege at the Capitol on Jan. 6 and the argument that the president posed an “imminent threat” and that “his continued presence in office is a clear and present danger to the United States.”

It concluded: “The facts establish that he is unfit to remain in office a single day longer, and warrant the immediate impeachment of President Trump.” 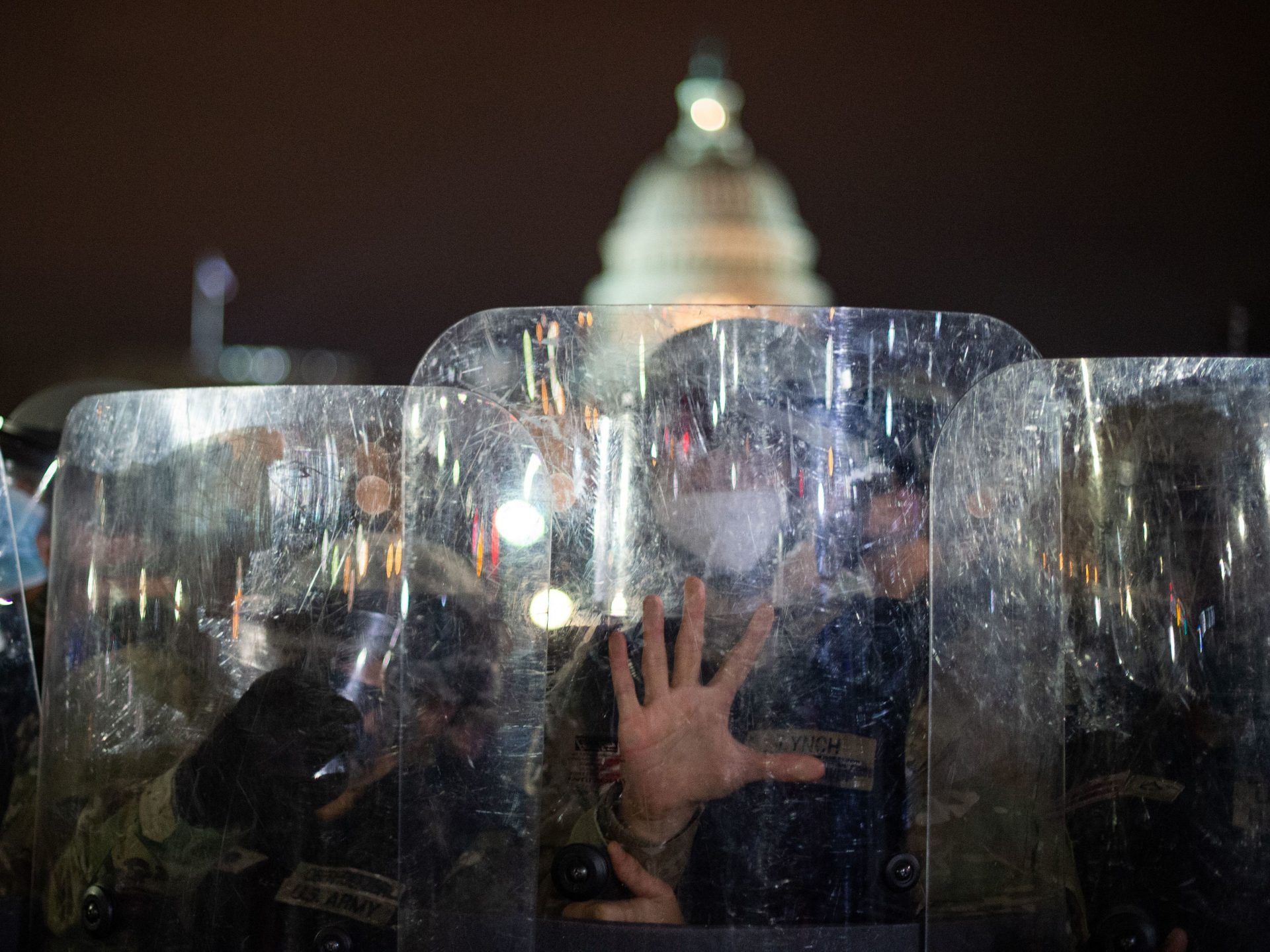 National Guard troops are seen behind shields as they clear a street from protestors outside the Capitol building on January 6, 2021 in Washington, DC.

According to the planned schedule, the House is expected to approve the resolution in the afternoon. Almost every member of the House Democratic caucus has co-sponsored the resolution.

President Trump on Tuesday criticized the effort to impeach him for a second time, defending the speech he made last week to his supporters where he urged them to go to the Capitol where Congress was certifying that Joe Biden had won the election. A violent mob then stormed the building, forcing Vice President Pence, lawmakers and staff to seek shelter.

The president, pressed by reporters traveling with him on a trip to Alamo, Texas, what his role and responsibility was for the violence, insisted he was not to blame.

“They’ve analyzed my speech and my words and my final paragraph, my final sentence, and everybody to the T thought it was totally appropriate,” Trump said. But his speech has been condemned widely, including by Republicans, for setting off the riot.

How The Process Will Work And What To Look For

Rule debate and vote setting parameters: The House will convene at 9 a.m. ET on Wednesday. After some housekeeping, lawmakers will begin debating the rule that establishes that there will be two hours of debate the impeachment resolution. After the House debates that rule, they vote on it — and possibly another procedural vote. Those are expected to pass mostly along party lines.

Debate on article of impeachment: The House will begin debate on the resolution, with the two hours divided equally between Republicans and Democrats. A lawmaker from each party manages debate, calling on members to speak and designating a set amount for each speech. The searing stories from some lawmakers who feared for their lives during last week’s insurrection could make for an emotional day.

House Speaker Nancy Pelosi, D-Calif., announced a group of nine Democrats who will serve as impeachment managers: Rep. Jamie Raskin of Maryland will be “lead manager”; he worked as a constitutional professor before running for Congress. The other eight have legal backgrounds as litigators or prosecutors — Reps. Diana DeGette of Colorado, David Cicilline of Rhode Island, Joaquin Castro of Texas, Eric Swalwell of California, Ted Lieu of California, delegate Stacey Plaskett from the Virgin Islands, Rep. Joe Neguse of Colorado and Rep. Madeleine Dean of Pennsylvania.

It’s unclear who will lead the debate for the Republicans since the leadership is split on impeachment. But strong Trump allies like Ohio Rep. Jim Jordan; Arizona Rep. Andy Biggs; and Georgia Rep. Marjorie Taylor Greene, a QAnon follower, were among those defending the president’s actions during Tuesday’s debate on the resolution on the 25th Amendment. 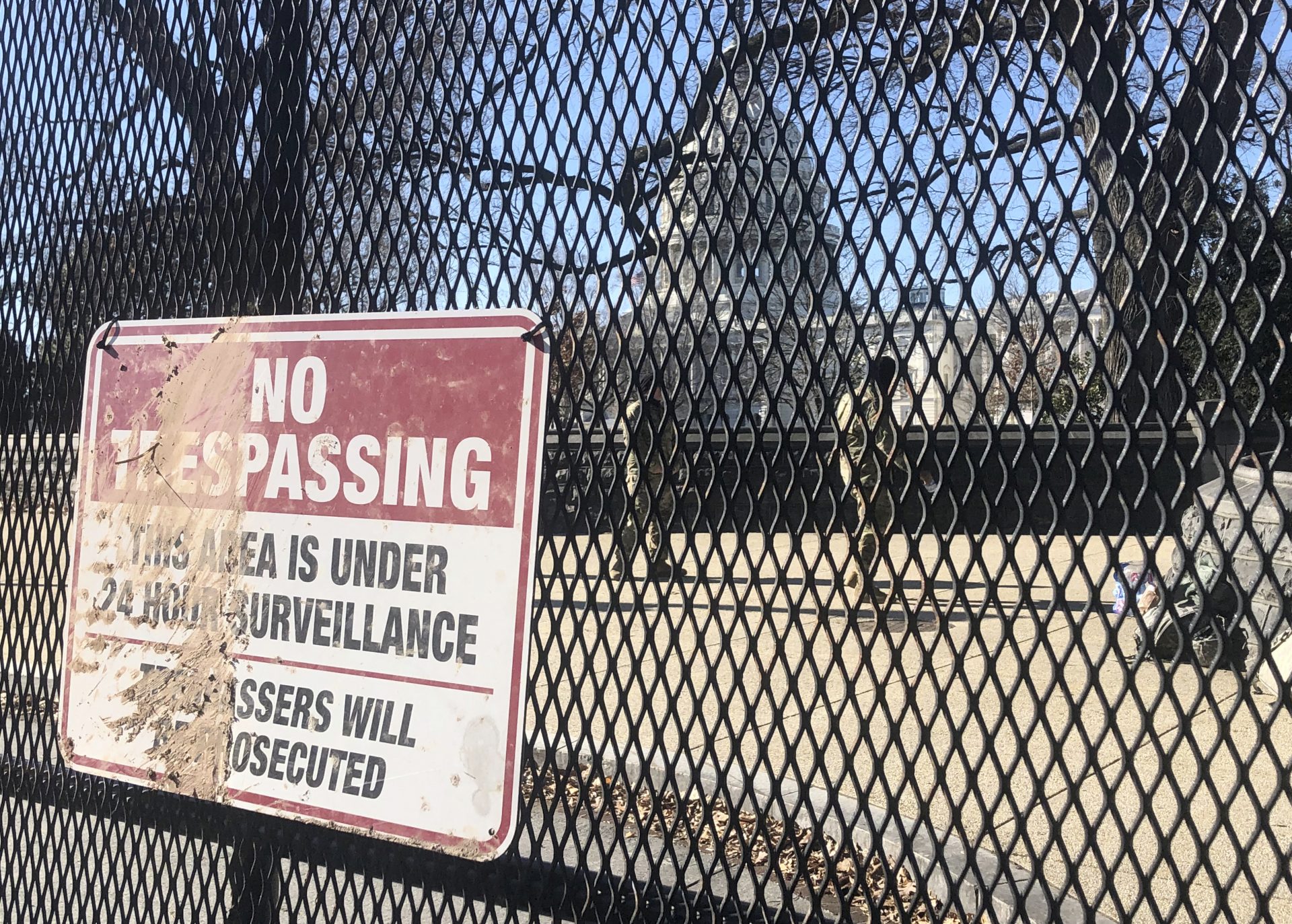 Members of the National Guard stand inside anti-scaling fencing that surrounds the Capitol complex, Sunday, Jan. 10, 2021, in Washington.

Republican split: Wyoming GOP Rep. Liz Cheney, the No. 3 House GOP leader, announced Tuesday she would vote yes, and her public break with the president — which came with a scathing statement blaming him directly for the riot — could give cover to those considering backing the resolution.

“There has never been a greater betrayal by a President of the United States of his office and his oath to the Constitution,” Cheney said.

Last week a majority of the House GOP conference backed up the president and voted for objections to two states’ electoral results — just hours after the attack. But as the details emerge about how pro-Trump extremists arrested in recent days cited the president as inspiring their actions, the number of Republicans willing to rebuke him is expected to grow. So far the number announcing they will vote yes is in the single digits.

Vote amid pandemic and new security and rules: After last week’s attack the top security official in the House is now requiring all lawmakers and staff to be screened before they enter the House chamber. Magnetometers are set up at the main entrances and some GOP members complained about them or walked around them onto the floor Tuesday evening, disregarding the new security measures.

Members were reminded that House guidelines require any members with licensed firearms are restricted to keeping them in their offices. New fines were instituted for those who decline to wear masks.

Votes, which typically last 15 minutes, are now extended because social distancing guidelines in place now require lawmakers to stagger voting in groups to cut down on too many people congregating on the floor.

Senate trial timing: It’s unclear how quickly Pelosi will transmit the impeachment resolution to the Senate after it passes the House. The Senate is not scheduled to be in session until Jan. 19, the day before Joe Biden is sworn in as the 46th president of the United States. The incoming Senate majority leader, New York Sen. Chuck Schumer, is exploring an effort to use emergency powers to call the Senate back before the 19th, but the current majority leader, Sen. Mitch McConnell, would need to agree.

Biden allies have openly worried that starting out his term with an impeachment trial would hamper the new administration from getting its early priorities through like Congress, like another coronavirus relief package. For his part, Biden said he is consulting with senators and the parliamentarian about setting up a schedule that would devote half of the day to the impeachment trial and half to confirming his Cabinet nominees and considering legislation.

Once the two Democrats elected in the Jan. 5 runoff elections are certified and they are sworn in, Democrats will gain control of the chamber, as the Senate will be evenly split 50-50, with the incoming vice president breaking the tie to give her party the majority. Leaders will have to draft an impeachment resolution to set the rules for how a trial would work.

GOP's Liz Cheney will vote to impeach: 'There has never been a greater betrayal by a president'