"We need to remember we're at war with the virus, not with one another. Not with each other.”

(Wilmington, Del.) — On a day of grace and grievance, President-elect Joe Biden summoned Americans to join in common purpose against the coronavirus pandemic and their political divisions while the man he will replace stoked the fading embers of his campaign to “turn the election over.”

Biden, in a Thanksgiving-eve address to the nation, put the surging pandemic front and center, pledging to tap the “vast powers” of the federal government and to “change the course of the disease” once in office. But for that to work, he said, Americans must step up for their own safety and that of their fellow citizens.

“I know the country has grown weary of the fight,” Biden said Wednesday. “We need to remember we’re at war with the virus, not with one another. Not with each other.”

President Donald Trump, who has scarcely mentioned the pandemic in recent days even as it has achieved record heights, remained fixated on his election defeat. 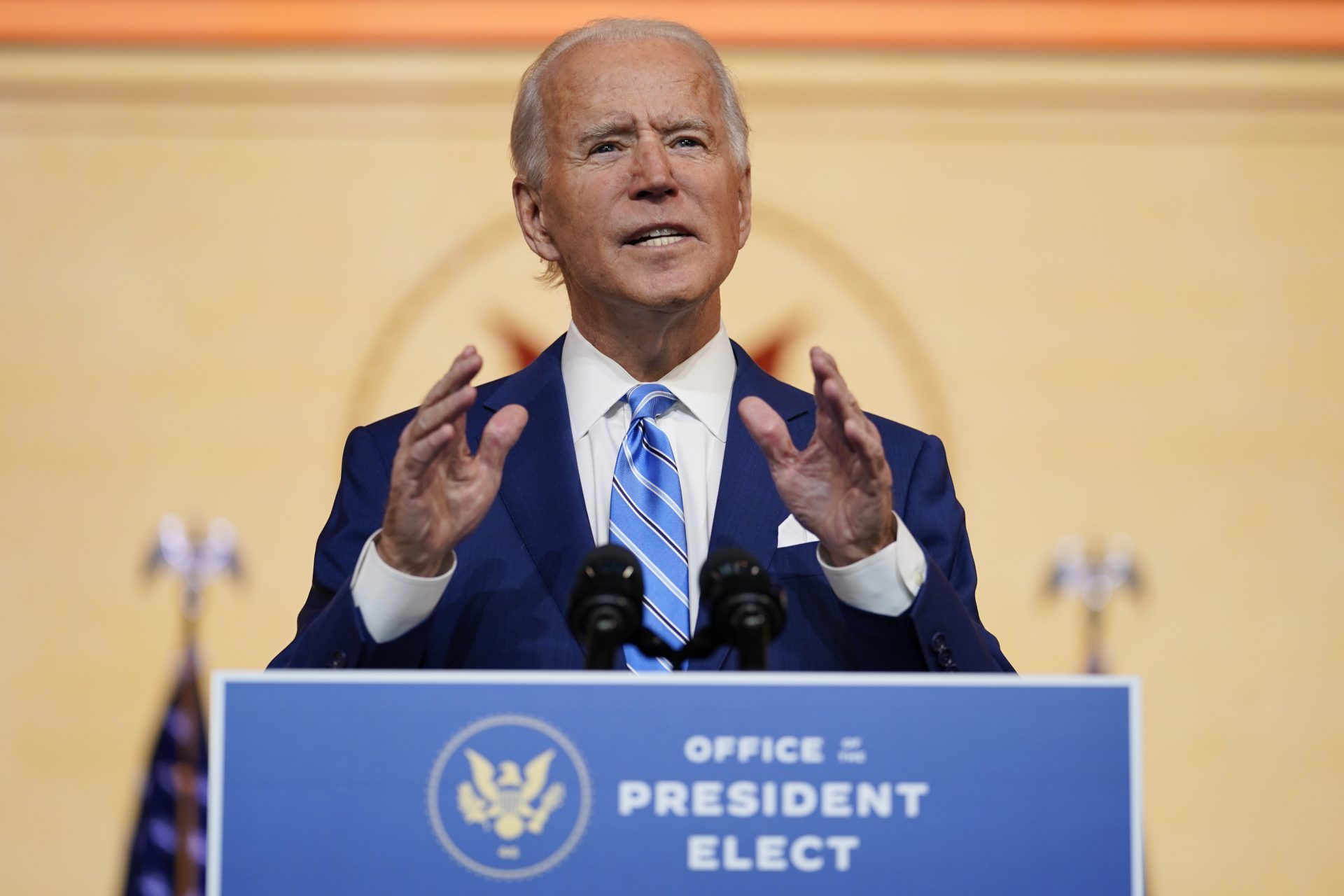 He sent his lawyer Rudy Giuliani and other members of his legal team to meet Pennsylvania Republican state senators in Gettysburg. Inside a hotel near the hallowed battlefields of civil war, they again aired complaints about the election and repeated allegations of Democratic malfeasance that have already disintegrated under examination by courts.

“We have to turn the election over,” Trump said from the Oval Office, where he joined the meeting by speakerphone.

“This was an election that we won easily,” he said. “We won it by a lot.” In fact, the election gave Biden a clear mandate, and no systemic fraud has been uncovered. Judge after judge has dismissed the Trump campaign’s accusations as baseless, and the transition to Biden’s presidency is fully underway.

Nevertheless, Trump repeated: “This election has to be turned around.”

Trump had been expected to appear in person in Gettysburg, but did not after another member of his legal team tested positive for the coronavirus. Few at the meeting wore masks.

Altogether, the forum heard — and cheered — yet another declaration from a U.S. president seeking to reverse a democratic election and the voters’ will because he wants to stay in power. The setting was about a mile from the scene of Pickett’s Charge, where Union troops repelled a desperate Confederate attack in July 1863 and helped turn the tide of the Civil War.

The president followed up by pardoning former national security adviser Michael Flynn, the second Trump associate convicted in the Russia probe to be granted clemency by Trump.

The pardon was part of a broader effort to undo the results of an investigation that for years has shadowed Trump’s administration and yielded criminal charges against a half dozen associates. The pardon voids the criminal case against Flynn just as a federal judge was deciding whether to grant a Justice Department request to dismiss the prosecution despite Flynn’s own guilty plea to lying to the FBI about his Russia contacts.

For his part, Biden has largely projected serenity as the necessary elements of a presidential transition — money, access to office space and more — were held at bay for nearly three weeks by Trump’s machinations and a delayed ascertainment by the General Services Administration that he had won the election. On Wednesday, he addressed Trump’s raw tactics only in passing.

“Our democracy was tested this year,” Biden said, “but the people of this nation are up to the task.”

“In America, we have full and fair and free elections, and then we honor the results,” he said. “The people of this nation and the laws of the land won’t stand for anything else.”

And he offered an optimistic vision, calling on Americans to “dream again” and predicting that “the 21st century is going to be an American century.” 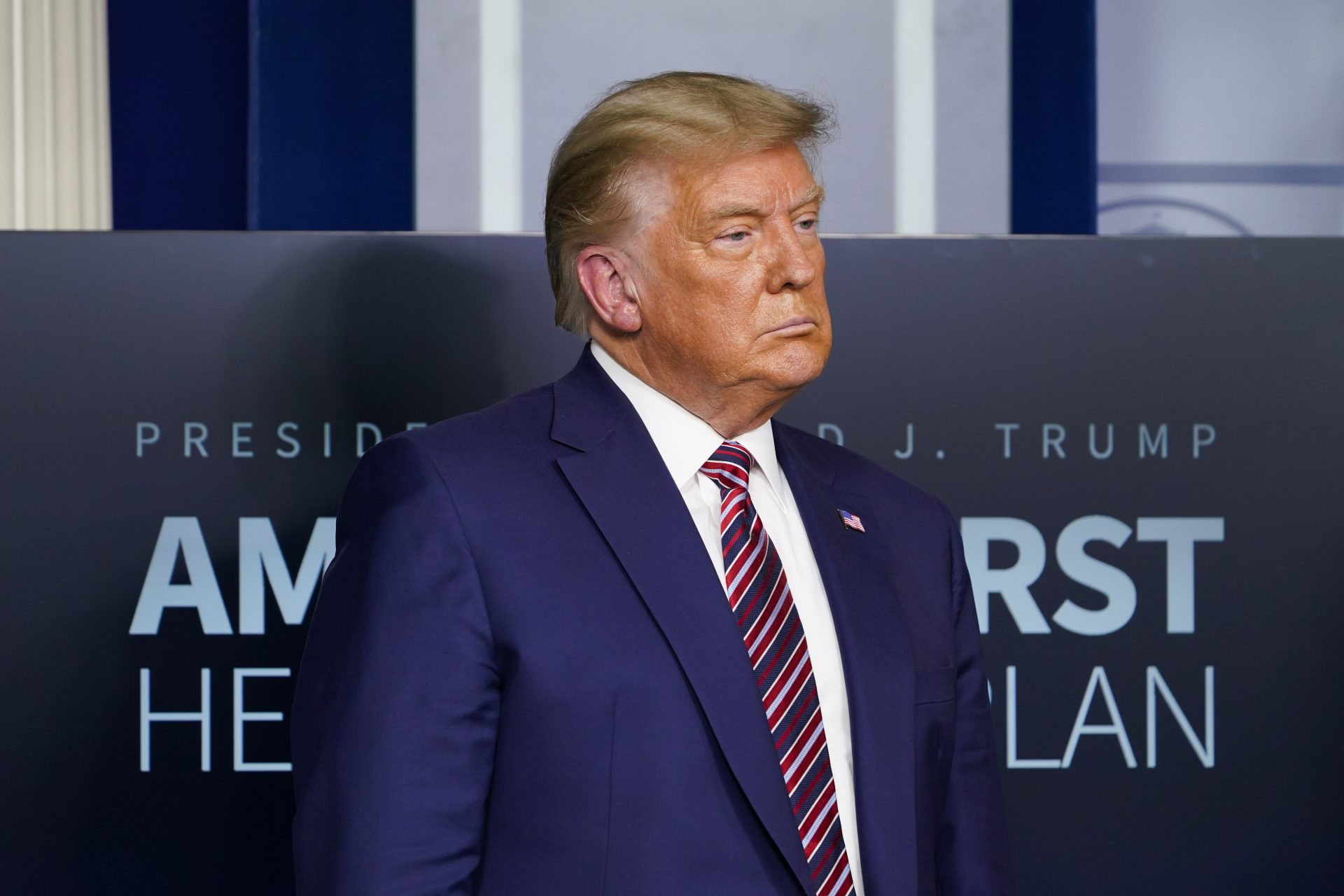 President Donald Trump listens during a news conference in the briefing room at the White House in Washington on Nov. 20, 2020.

Biden pledged more virus testing, more protective gear and clearer guidance for businesses and schools to reopen when he becomes president. Until vaccines are distributed, he said, masks, social distancing and limits in the size of gatherings “are our most effective tools to combat the virus.”

Biden’s remarks came as COVID-19 cases are surging nationwide. Hospitalizations, deaths and the testing positivity rate were also up sharply as the nation headed into Thanksgiving, and public health experts have warned that the large family gatherings expected for the holiday are likely to extend and exacerbate the surge.

He has formed a coronavirus advisory board of scientists, doctors and public health experts, and plans to establish a COVID-19 coordinator in the White House to lead his administration’s response.

This week, however, Biden focused beyond the crisis stateside and unveiled his national security team on Tuesday, including his nominees for secretary of state, director of national intelligence and U.S. ambassador to the United Nations. Drawing implicit contrasts with Trump, Biden said the team “reflects the fact that America is back, ready to lead the world, not retreat from it.” He’s also expected to name Janet Yellen as treasury secretary in the coming weeks.

In urging Americans to be vigilant in their Thanksgiving plans, Biden said Wednesday he was taking precautions of his own, eschewing his traditional large family gathering and spending the holiday instead with just his wife, daughter and son-in-law.

He’s traveling with his wife, Jill, to Rehoboth Beach, the small Delaware beach town where the two have a vacation home. That’s where they’ll host their family for Thanksgiving dinner. Biden is expected to stay through the weekend in Rehoboth before returning to Wilmington for further work on the transition.

Trump will forgo his usual plans to celebrate Thanksgiving at his private club in Florida and will instead remain at the White House.