Supporters of President Donald Trump cheer as his motorcade drives past a rally of supporters near the White House, Saturday, Nov. 14, 2020, in Washington.

The president has spread evidence-free claims about his Nov. 3 loss. 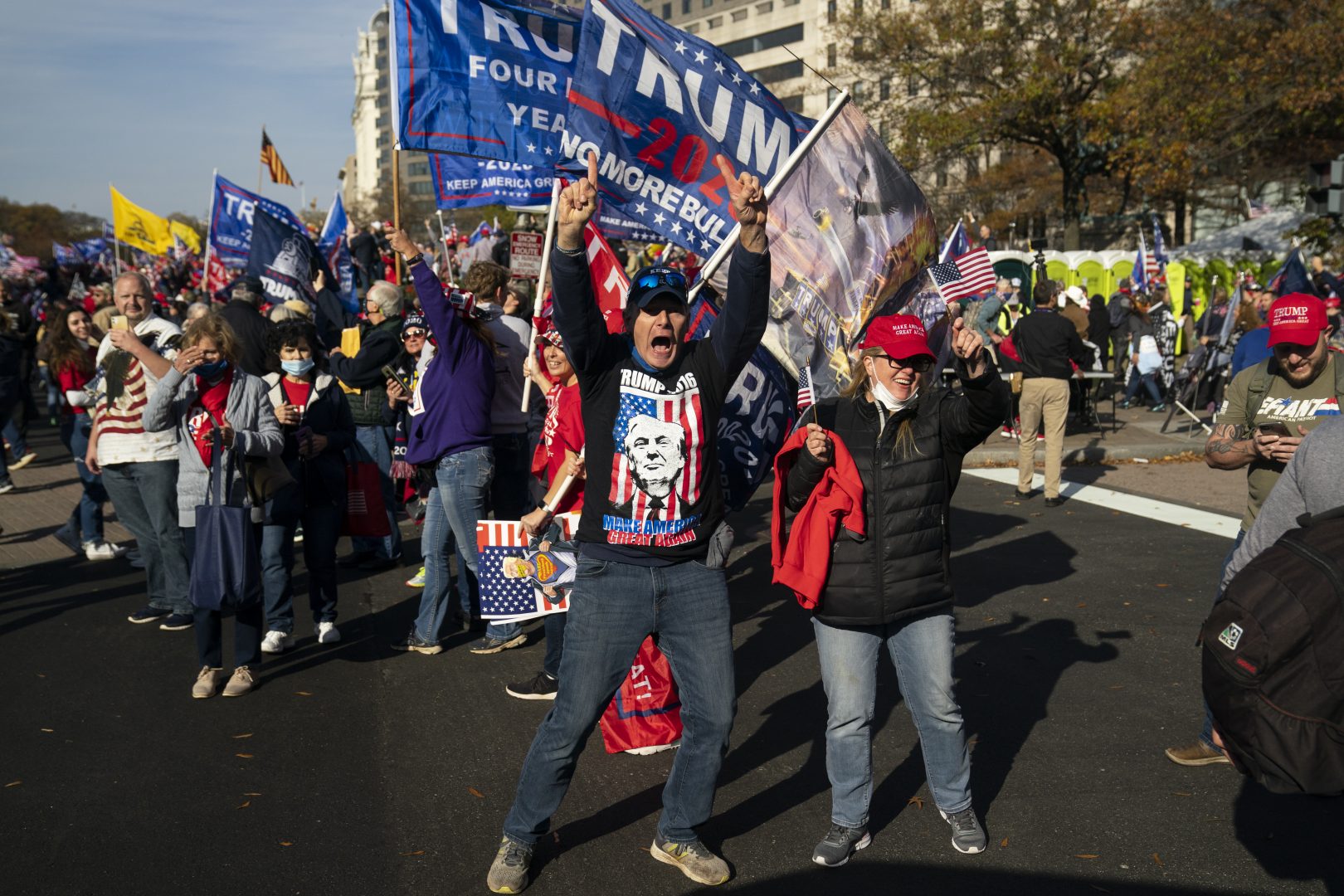 Supporters of President Donald Trump cheer as his motorcade drives past a rally of supporters near the White House, Saturday, Nov. 14, 2020, in Washington.

Thousands of President Trump’s supporters were out in Washington, D.C., on Saturday for a day of rallying to echo the false assertion that the presidential election was marked by fraud.

Election officials — both Democratic and Republican — across the U.S. have thoroughly debunked claims of the fraud and malfeasance in the 2020 presidential election.

They were joined on Thursday by the Department of Homeland Security, which in a statement concluded, “There is no evidence that any voting system deleted or lost votes, changed votes, or was in any way compromised.” The statement, which was put out by agencies within the department responsible for election integrity, called the Nov. 3 election “the most secure in American history.”

Former Vice President Joe Biden has passed the 270 electoral votes needed to win the presidency, and leads Trump in the popular vote by more than 5.5 million votes.

But Trump and many of his supporters have refused to recognize the election results. One week after Biden’s presidential victory brought about spontaneous celebrations in the nation’s capital, a crowd that included the group Women for America First, right-wing activists and conspiracy theorists gathered in the city’s downtown near the White House.

Members of the Proud Boys, a white-nationalist movement designated as a hate group by the Southern Poverty Law Center, were also seen out on the streets of Washington.

A rally and a march to insist that Trump rightfully won a second term were planned for the day. The events are going by several names, including the Million MAGA March, the March for Trump and Stop the Steal DC.

By late Saturday morning, hundreds had assembled in Freedom Plaza near the White House.

Video showed attendees waving American and Trump 2020 flags. Few could be seen wearing a mask, even as the U.S. on Friday announced a new daily record of 184,000 confirmed coronavirus cases.

At one point, the crowd was greeted by Trump himself, who rode past demonstrators in his mortorcade shortly after 10 a.m. Trump, who has refused to concede the election to Biden, waved to supporters who held out signs reading “Best prez ever” and “Stop the steal.”

Trump had teased a possible appearance in a tweet on Friday, saying it was “Heartwarming” to see the support and that “I may even try to stop by and say hello.”

Later in the afternoon, protesters moved onto the Supreme Court for a rally. Among speakers was the right-wing media personality and conspiracy theorist Alex Jones.

Tammy Summers, who traveled to Washington from Missouri, said she was there to show her support from Trump as he continues to contest the election results.

“We’re here to tell President Trump that we totally support him,” Summers said. “He should never give up the fight and never give in.”

Summers also questioned findings concluding that there was no widespread fraud in the 2020 election.

The arrival of the so-called “stop the steal” caravans has raised concerns in the overwhelmingly Democratic city.

A handful of skirmishes broke out Friday as counterprotesters attempted to prevent the removal of signs on fencing around the White House.

On Saturday morning, video posted by local activists showed what appeared to be a small group of rallygoers ripping down anti-racism and police brutality artwork in Black Lives Matter Plaza. That section of the city was renamed during massive racial justice protests over the summer.

Fears that attendees would bring guns — as was the case during anti-lockdown protests in several states in recent months — were also high.

On Saturday, D.C. Attorney General Karl Racine tweeted out a reminder of local gun laws, which prohibit openly carrying a firearm and restrict where permitted conceal-carry weapons are allowed.

“No firearms are allowed around the White House, the National Mall, the Tidal Basin or the US Capitol – permit or no permit,” Racine tweeted.

Counter-protests were also happening in the city. The group Refuse Fascism DC posted a video of its demonstration starting in Black Lives Matter Plaza.

The events were mostly peaceful throughout the day Saturday. Ahead of the demonstrations, police in Washington announced road closures and parking restrictions.