‘He forgot the forgotten man’: Biden blasts Trump at post-debate stop in Pittsburgh

The stop was part of a one-day whistlestop tour, with crowds kept small to reduce the spread of the coronavirus.

“As soon as he got inaugurated, he forgot the forgotten man,” said Biden. While he acknowledged that Trump had “made a lot of hay” by playing on working-class fear and resentment over the decline of manufacturing, Biden said Trump “can only see the world from Park Avenue.”

Biden spoke for about one quarter-hour before a union-friendly crowd of roughly 50 gathered at Pittsburgh’s Downtown Amtrak station.  The stop was part of a one-day whistlestop tour, with crowds kept small to reduce the spread of the coronavirus.

Biden picked up a line of attack he and other Democrats have begun to deploy this fall: charging that the Trump White House was seeking to overturn he Affordable Care Act at the Supreme Court. That could jeopardize protections for people with pre-existing conditions. Noting the death of his son Beau to cancer, Biden said the issue was personal for him. 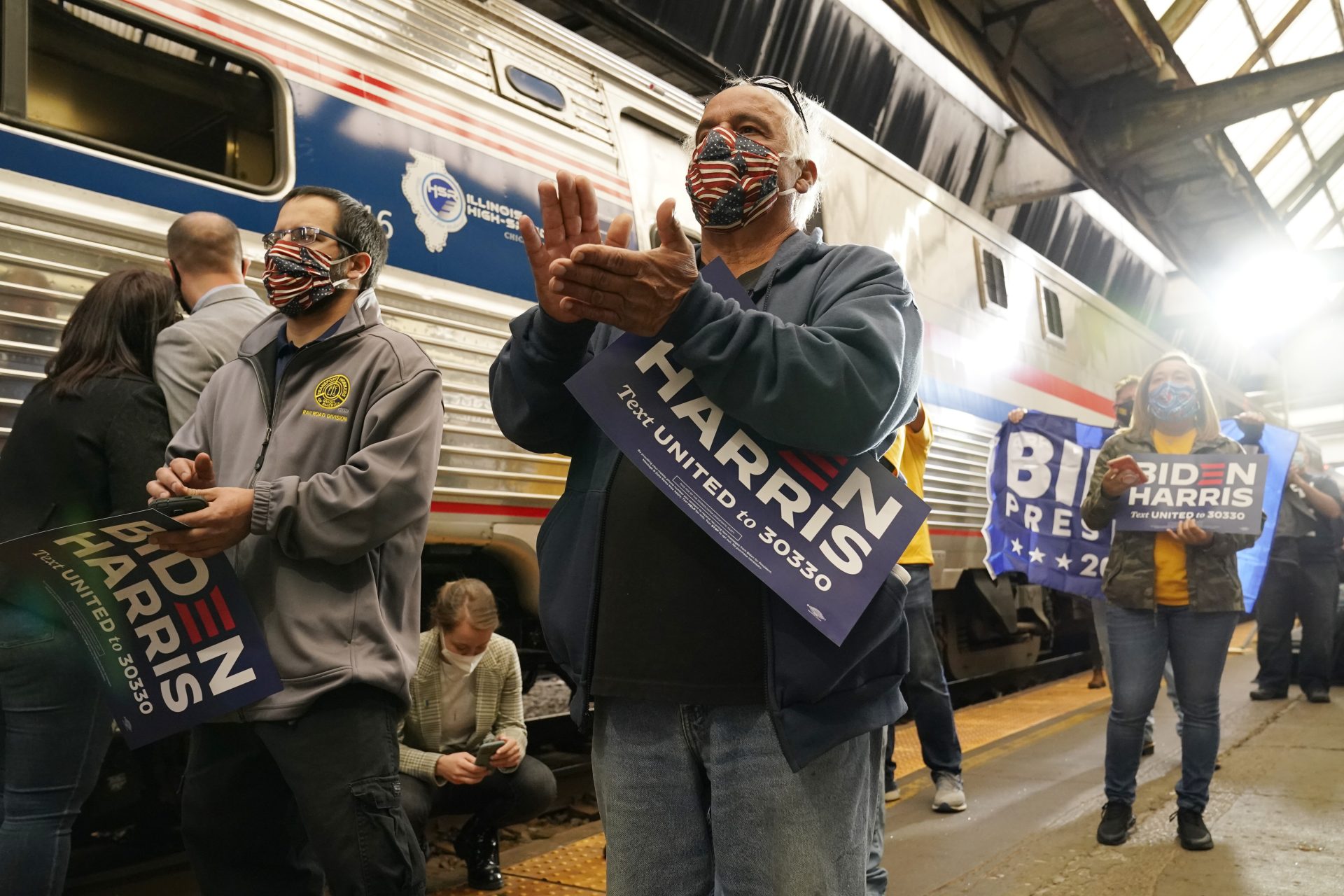 “I promise you, if I’m elected I will protect your health care like I’d protect my own family. It’s that basic to me.”

Biden also pledged to overturn a 2017 tax-cut package that represents one of Trump’s largest accomplishments – but whose benefits for average taxpayers have been modest. “You realize that in the middle of the pandemic, billionaires are richer than they’ve ever been?” Biden asked, apparently citing estimates that say America’s economic elite have increased their wealth by over half a trillion dollars. “How about you all? You get that kind of break? … It’s about time we start to reward work, not just wealth.”

Biden’s appearance was the second stop on a day-long tour of Ohio and Pennsylvania, the goal of which was to “highlight how he will build back our economy for working families, not the super wealthy and corporations.”

Whistle-stop tours are a longstanding American political tradition, and Biden’s fondness for rail travel – he took daily 250-mile round trips from Washington D.C. to his home in Delaware as Senator – is part of his brand.

His Pittsburgh stop was the third on a one-day rail tour that began in Cleveland and will end in Johnstown this evening. The tour also features Westmoreland County stops in Greensburg and Latrobe – towns that represent the post-industrial and rural areas where Trump was able to drum up sufficient support to win the state in 2016.

Democrats in those areas complained that Hillary Clinton, the Democratic nominee in that year, bypassed them in favor of concentrating on urban areas. 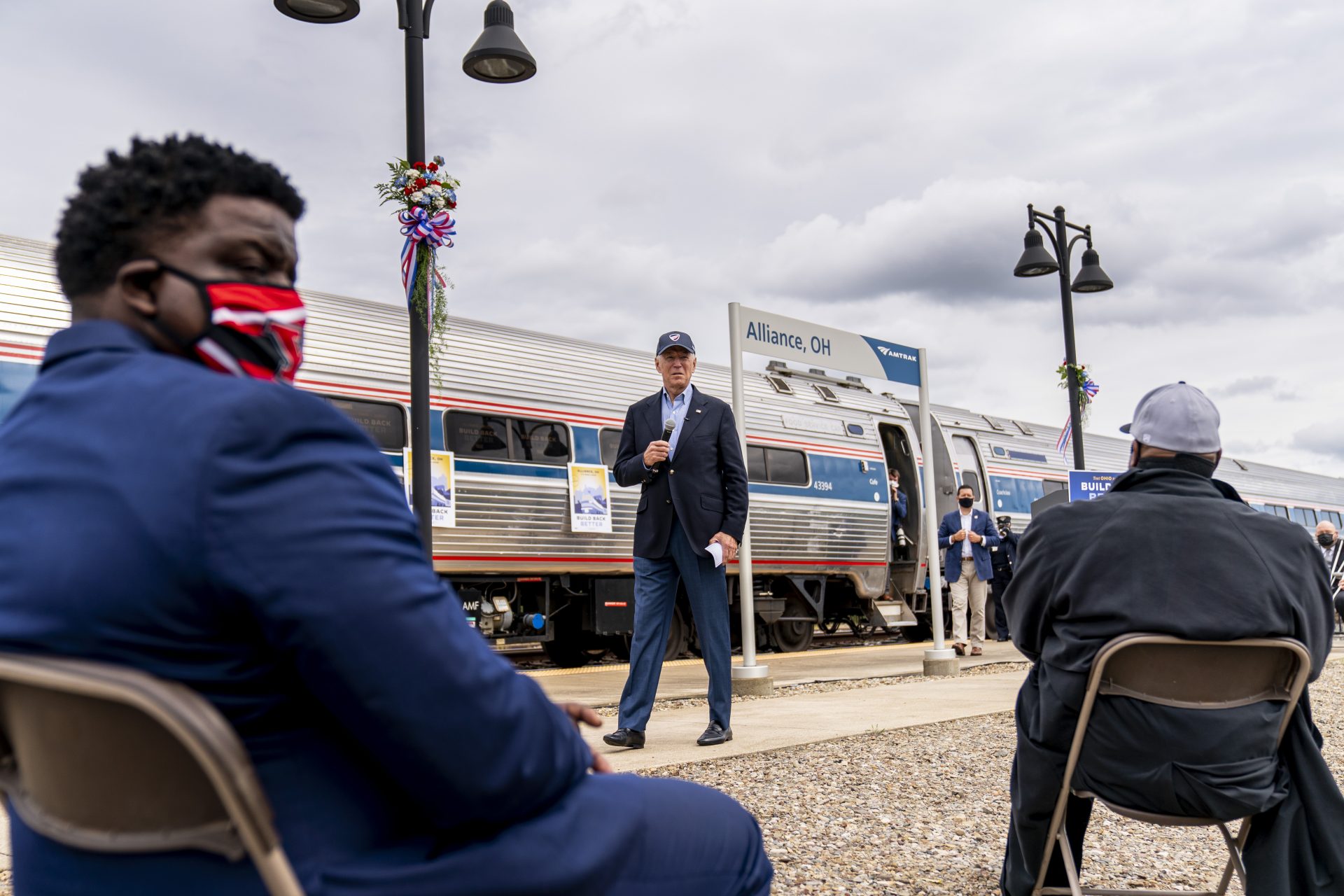 During an earlier stop in Ohio, Biden reflected on the debate Tuesday night, calling Trump’s performance “a national embarrassment.” He cited Trump’s refusal to condemn white supremacists – Trump’s message to one such group was “stand by” – and the President’s casting of aspersions on the integrity of the election process.

“Last night reinforced for me why I got in this race in the first place,” Biden said. “He made it clear that if he lost it wouldn’t be a legitimate election, already began to plant seeds of doubt. … [W]hen asked would he condemn white supremacy, he didn’t stay a word.”

Biden said his own message to such groups would be “cease and desist.”