They say at least 30 letter-sorting machines have been removed from Pennsylvania mail facilities.

(Harrisburg) —  President Donald Trump’s postmaster general was asked to immediately return sorting machines that were removed by U.S. Sen. Bob Casey and 10 of Pennsylvania’s members of Congress on Tuesday, as union officials say the machines’ removal has contributed to a slowdown in mail delivery.

The letter to Postmaster General Louis DeJoy was signed by the Democratic senator from Pennsylvania, all nine Pennsylvania Democrats in the U.S. House and one of its nine Republicans, U.S. Rep. Brian Fitzpatrick of Bucks County.

“Over the past several weeks we have heard from people in every county across the Commonwealth of Pennsylvania who are gravely concerned about delayed mail delivery,” they wrote. “We call on you to immediately return to service machines that have been removed in recent months.”

A postal service spokesperson, however, said Tuesday that slowdowns in mail service are beginning to improve and reiterated that it will not return the machines. The order to remove them was given before DeJoy — a former supply-chain CEO who is a major donor to Trump and the Republican Party — took over the post in June, the spokesperson said. 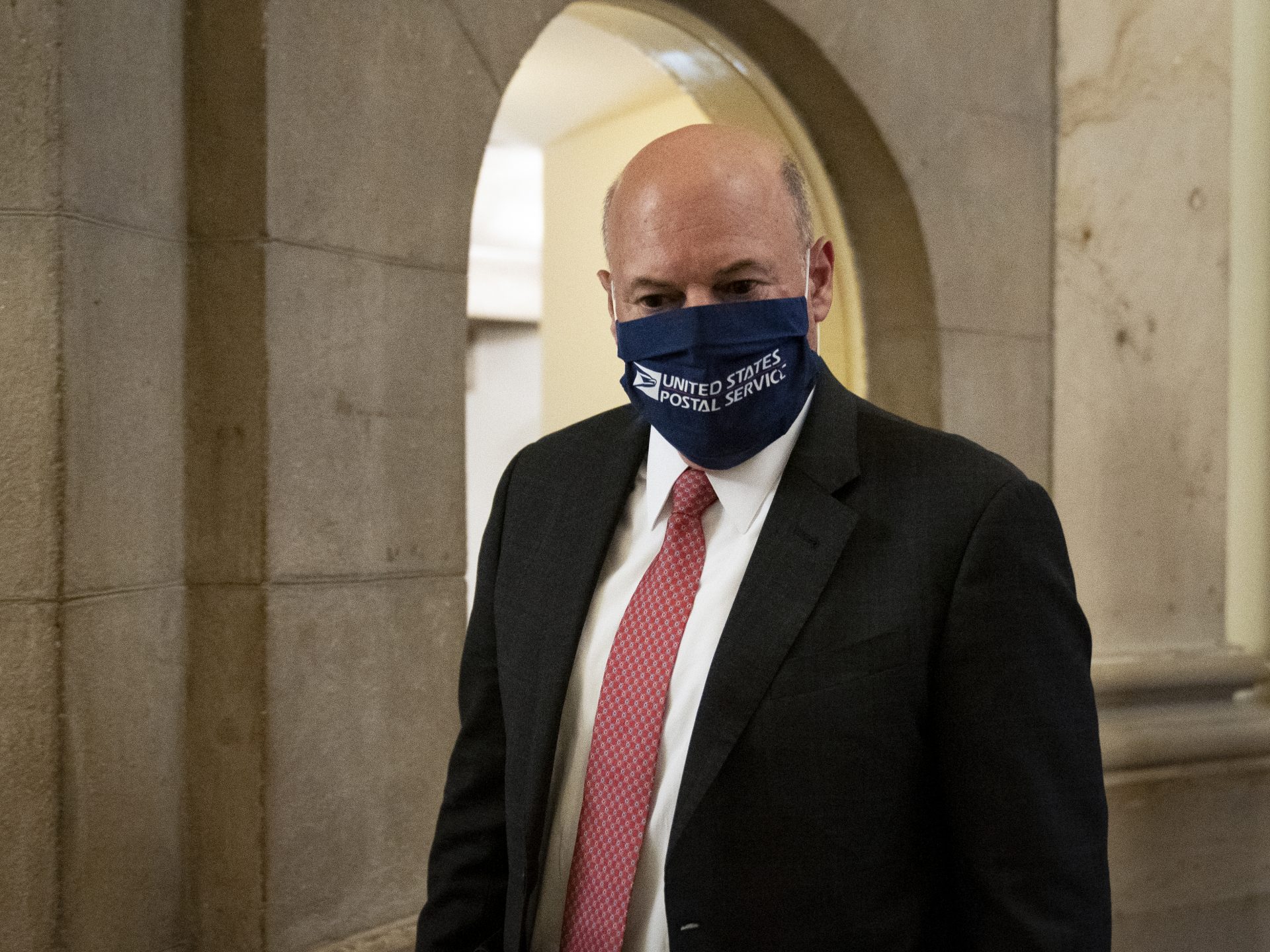 Postmaster General Louis DeJoy departs from a meeting in the Capitol in early August.

The machines, the spokesperson said, were not needed, a contention disputed by two postal worker union officials in Pennsylvania, who said Tuesday the removal of the machines was extraordinarily unusual and continues to contribute to the slowdown in mail delivery around the state.

The partisan fight over postal service is casting a shadow over the coming presidential election, with millions in Pennsylvania expected to vote by mail amid the pandemic.

Trump has baselessly claimed that mail-in voting will lead to fraud and acknowledged that he is withholding emergency aid from the postal service to make it harder to process an expected surge of mail-in ballots, which he worries could cost him the election.

DeJoy also said he would continue policies limiting when mail can go out, as well as halting late delivery trips.

DeJoy, however, insisted he is not trying to sabotage the election.

If every American voted by mail this year, that volume would be three-quarters of what the Postal Service delivers in one day, or 330 million ballots compared to 433 million pieces of mail in a regular day, the Postal Service said. That could amount to less than 2% of total mail volume from mid-September to Election Day, it said.

Nick Caselli, president of the Philadelphia-area local of the American Postal Workers Union, said Tuesday that it’s clear that sabotage is DeJoy’s aim.

“It’s blatant, it’s deliberate,” Caselli said. “It’s the only way to look at it.”

Casey and the other lawmakers say at least 30 letter-sorting machines have been removed from Pennsylvania mail facilities.

Sometimes, machines are removed and replaced with an updated machine, and sometimes a machine is loaned out to another distribution center that needs it, they said.

“But to remove three machines that we need doesn’t make sense at this time when you’re going into your heaviest time of the year,” said Kim Miller, president of the Philadelphia-area local of the American Postal Workers Union.

Meanwhile, the Postal Service’s warning that it’s delivery times “appear to be incompatible” with Pennsylvania’s mail-in ballot deadlines has invigorated a partisan fight over changing those deadlines.

Gov. Tom Wolf’s administration, along with his Democratic allies, is asking the state Supreme Court to require counties to count ballots that arrive up to three days after the Nov. 3 election, as long as they are postmarked by Election Day. The current deadline is the close of polls.

Republicans oppose that and, to minimize late-arriving ballots, are seeking to shorten the deadline to request a mail-in ballot, from one week to 15 days before the election. Democrats oppose that.