Desks are spaced out 6-feet apart in a classroom at Camden Prep, a charter school in Camden, New Jersey.

This story is from The Pulse, a weekly health and science podcast from WHYY. Subscribe on Apple Podcasts, Stitcher or wherever you get your podcasts.

The hallways at Camden Prep look like they’re frozen in time.

The only thing missing is the kids.

“Welcome to a school building with no children,” said administrator Natalie Cooper.

In mid-March, American education came to a sudden, unprecedented halt. Schools across the country shifted as fast as they could to online learning. It was one of the hardest things many educators have ever done in their careers — until now.

That doubt hangs over every school leader in America — from those that run gigantic, sprawling school districts to those that run small private schools. And this fall, each is making a decision: Do I open my doors?

The people in charge are trained as educators, not scientists. And they’re trying to solve a problem that keeps changing.

Normally, it takes years for scientific thought to migrate into real-life practice. Today, the public is asking lay people to make real-time sense of a disease scientists are learning about on the fly.

How that decision-making process works at different schools reveals much about America’s education system — which isn’t so much a system as it is a federation of local entities with their own rules, customs, and mascots.

While New York City presses toward a partial reopening, Los Angeles pledges to stay virtual. And school hallways in suburban Atlanta are already filled with students. Such is life in a country with over 13,000 public school districts and another 33,000 private schools.

There is even variety within the Philadelphia region, when it comes to reopening.

‘It’s about being nimble’

Natalie Cooper hopes the squeaky clean hallways at Camden Prep will be filled with students this fall — just not as many as would normally fill them.

Camden Prep is part of Uncommon Schools, a charter-school network that has two campuses in the city and about 800 students.

The plan right now is for students to start the year online and then eventually come to school in shifts — so that basically you have half the kids physically in school on a given day. The extra space allows for more distancing. Some people call it a “hybrid” approach. 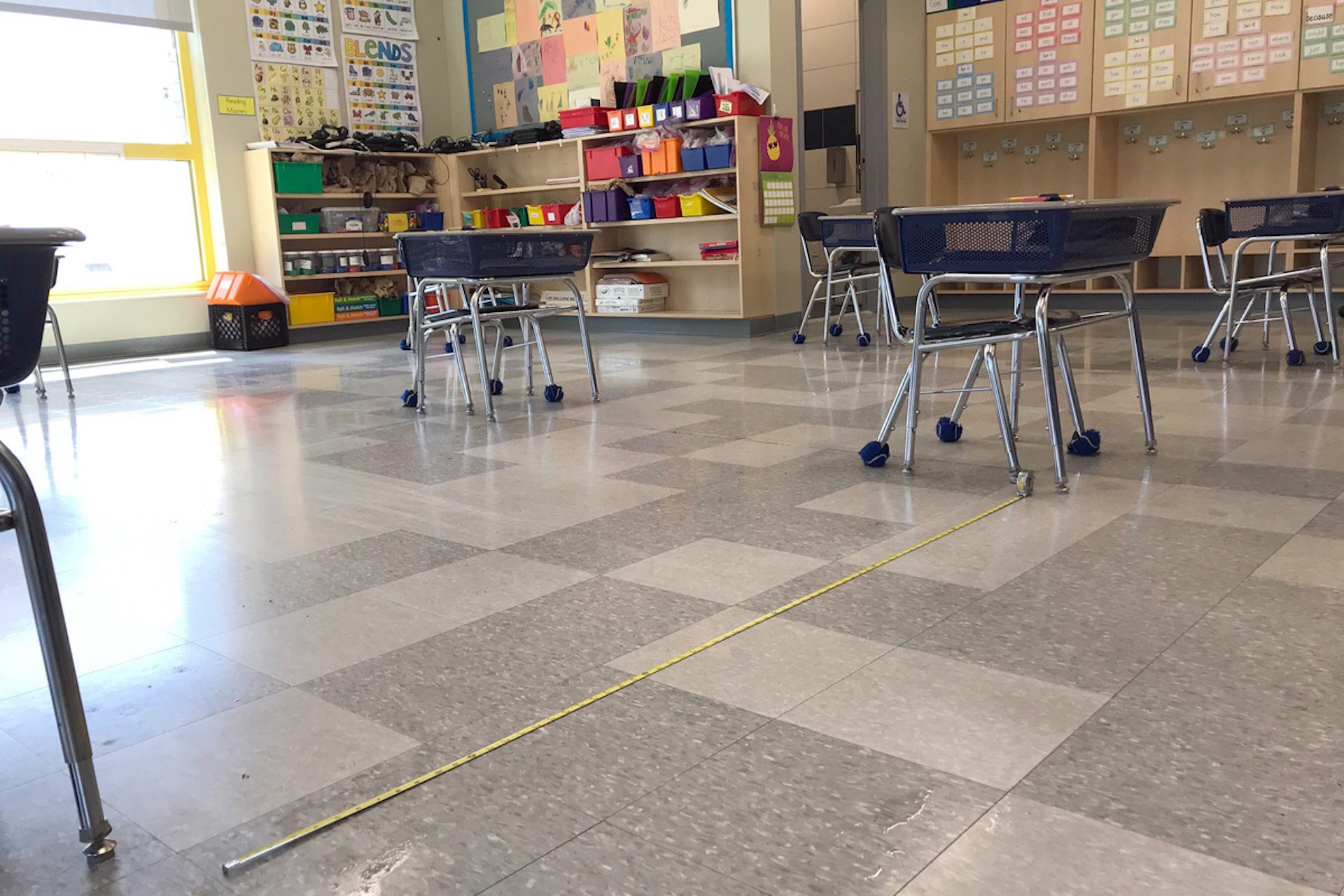 Desks are spaced out 6-feet apart in a classroom at Camden Prep, a charter school in Camden, New Jersey.

In a model kindergarten classroom, all the desks face forward and are spread out to reduce the possibility of kids breathing on each other. A liquid disinfectant coats the floor.

Each return-to-school plan encompasses a dizzying list of details. Take something as simple as dismissal. Instead of doing it all in 15 minutes like in normal times, Uncommon Schools will dismiss kids in shifts over the course of an hour to help spread people out.

And that’s just one part of one plan. Natalie’s team actually has three plans. One for all-virtual instruction. One for all-in-person. And one for the in-between that they’re stuck in right now. The goal is to be able to switch among them seamlessly.

They’re prepping for the possibility — perhaps likelihood — that a staff absence could cause some or part of the school to go all-virtual on any given day.

“The people factor is going to be one of the most challenging parts,” said Cooper. “We don’t wanna have kids or adults here who are sick. But we also recognize that we can’t run a full program without the right staff.”

Scientists and advocates agree that flexibility is paramount right now. At any individual school, the best laid plans could easily be thrown into chaos. Schools are going to be extra vigilant this year about any sign of sickness — even the sniffles — which could mean asking a sizable number of students to quarantine. And that’s to say nothing of the novel coronavirus itself, which continues to cut a deadly path across the country.

“Adaptability and flexibility are very much key to all of this,” said Charles Branas, who heads the epidemiology department at Columbia University’s Mailman School of Public Health. “The science is evolving here.”

Katharine Savage is in charge of Philadelphia Classical, a tiny private school in the heart of the city.

Online or “distance” learning in the spring had been hard for just about all of her roughly 100 students.

“What we noticed is after about a month of distance learning only the really strong survive,” Savage said. “And even those strong are really miserable.”

Kids and parents wanted to return to in-classroom instruction, she said. But every time Savage started to think about how her staff would make it happen, she got hung up on all the things they wouldn’t be able to do.

The school rents space in a downtown church and the sanctuary usually serves as a gathering space for morning meetings, celebrations, and concerts. All of that would have to be scrapped or turned into virtual assemblies.

“For me especially as the leader of this school you have a vision of what you’re trying to give to the students and what you want to do with the students,” Savage said. “So when that [was] interrupted, I met that interruption initially with just a lot of frustration.”

It wasn’t until late June that her angst turned into resolve. Opening school, she decided, was a puzzle to solve and not a burden to bear.

“Once I shifted my mentality then the puzzle seemed less burdensome,” Savage said.

Now, Philadelphia Classical will be open five days a week for all students.

Kids will move through the school in small, isolated cohorts to cut down on the likelihood of widespread outbreaks. Every bit of space has been utilized to create more room. The sanctuary will now be a big classroom for the older kids. And there’s an emphasis on ventilation: open doors, open windows, even an open campus.

Savage recently sent an e-mail to the older students telling them to bring a picnic blanket to school so they could go to a nearby park on sunny days and eat their lunches outside. In colder months, students will be asked to wear jackets and sweaters.

The fact that Savage can make casual suggestions like these leads to an important point: Philadelphia Classical School is small.

“We do have that luxury,” she admitted. “We have a smaller community and a lot of parent buy-in.”

Robin Ruiz and her peers track that evolution on a daily email chain among school leaders in Camden County, New Jersey. The first email usually goes out around 6 a.m., and the replies pile up through midnight.

“We’re asking each other questions,” Ruiz said. “We’re reading. We found something. We share it.”

Ruiz runs Hope Community Charter School, also in Camden, New Jersey. She has a tight-knit team of 25 staffers. And that helps them stay flexible. But the hamster-wheel of new information can be tiring.

She’s counting on her staff to be the constant for students and families as the world around them changes at warp speed.

When a local nonprofit, Camden Education Fund, made grants available for local schools to cover reopening costs, Ruiz applied for money to support a full-time social worker — someone with the skills to talk through problems with kids and connect parents to help when they need it.

“We need students to have a safe place to talk about how they feel, someone they can talk to,” Ruiz said.

Naeha Dean, executive director of the Camden Education Fund, said about a quarter of the $800,000 her organization disbursed to local schools went to social and emotional support services. That’s roughly the same percentage that schools requested for operational expenses like thermometers and plexiglass.

That’s part of the reason why Ruiz’s school will have a hybrid model that allows students to be in the building. Establishing and maintaining that connection with students is vital.

“A child needs to be in a safe space — emotionally, physically and academically — to grow,” she said.

Not risking lives on the ‘what ifs’

Christopher Dormer, Superintendent of the Norristown Area School District, also wanted to create safe spaces for the students he serves. That’s why he and his team spent months developing plans for a return to the classroom.

The district serves almost 8,000 students, most of them low-income. To get a sense of what his families wanted for the fall, Dormer created a survey. The results showed an almost even split between parents that wanted in-person, hybrid, or all-virtual learning.

At one point, he and his team were looking at 16 different sets of guidance — from different government entities and health organizations. Dormer usually gets about six hours of sleep a night. Not this summer.

“There was a couple week period where if I was getting three [hours] I was lucky, Dormer said. “[I was] literally up til 2, 2:30, 3 in the morning just agonizing over decisions.”

At the end of July, he called it. For the semester that runs through winter break, his district would be 100% virtual. When he looked at all the guidance — with all the variations around mask use, physical distancing, and more — he felt it was just too messy and contradictory to trust.

“I’m not willing to risk anyone’s life on the what-ifs,” Dormer said.

Part of the reason why guidance can look so messy and contradictory is because knowledge about the disease itself is fluid. So is the nation’s response.

When public health experts began crafting back-to-school recommendations and policy papers back in April, they’d hoped American schools could rely on mass testing and contact tracing to aid their reopening plans. That largely has not materialized.

“There just hasn’t really been a national effort to do that,” said Deanna Marshall, a former public school teacher who now works for the policy arm of the Children’s Hospital of Philadelphia.

Preaching flexibility is a nice thought, but that’s difficult to do for a large school district. Marshall points out that school districts are built to ensure equity of services, often at the expense of flexibility.

“They’re looking for this equity across all of their schools,” said Marshall. “They have standards for every single detail.”

That’s a laudable goal, but one that’s hard to square with an ever-evolving virus.

Dormer felt like a district his size had the muscle to really make online learning work if everyone was rowing in the same direction. But the idea of going back and forth between in-person and online made him uneasy.

“Mentally and physically being able to flip that switch is not a seamless process,” he said.

Superintendents are accustomed to making tough decisions. Dormer jokes that to do the job well you have to wear two skins: kevlar and teflon.

“You gotta be bulletproof when people come at you, and if people throw things at you, you gotta let it slide,” said Dormer.

But this decision felt different. The logistics were dizzying. The science kept changing. And there was always that thought looming over everything: What if someone gets really sick — or dies?

“It’s not something I can think about right now,” admitted Robin Ruiz, whose Camden school is doing a hybrid model. “I can’t go down that road.”

Ruiz is trying to suppress those worst-case thoughts and focus on all the little details that will make her school as safe as possible this fall.

Unemployment in Pa. was up slightly in July, as the state's economy begins to show signs of life