Trump, Biden battle for the soul of Scranton 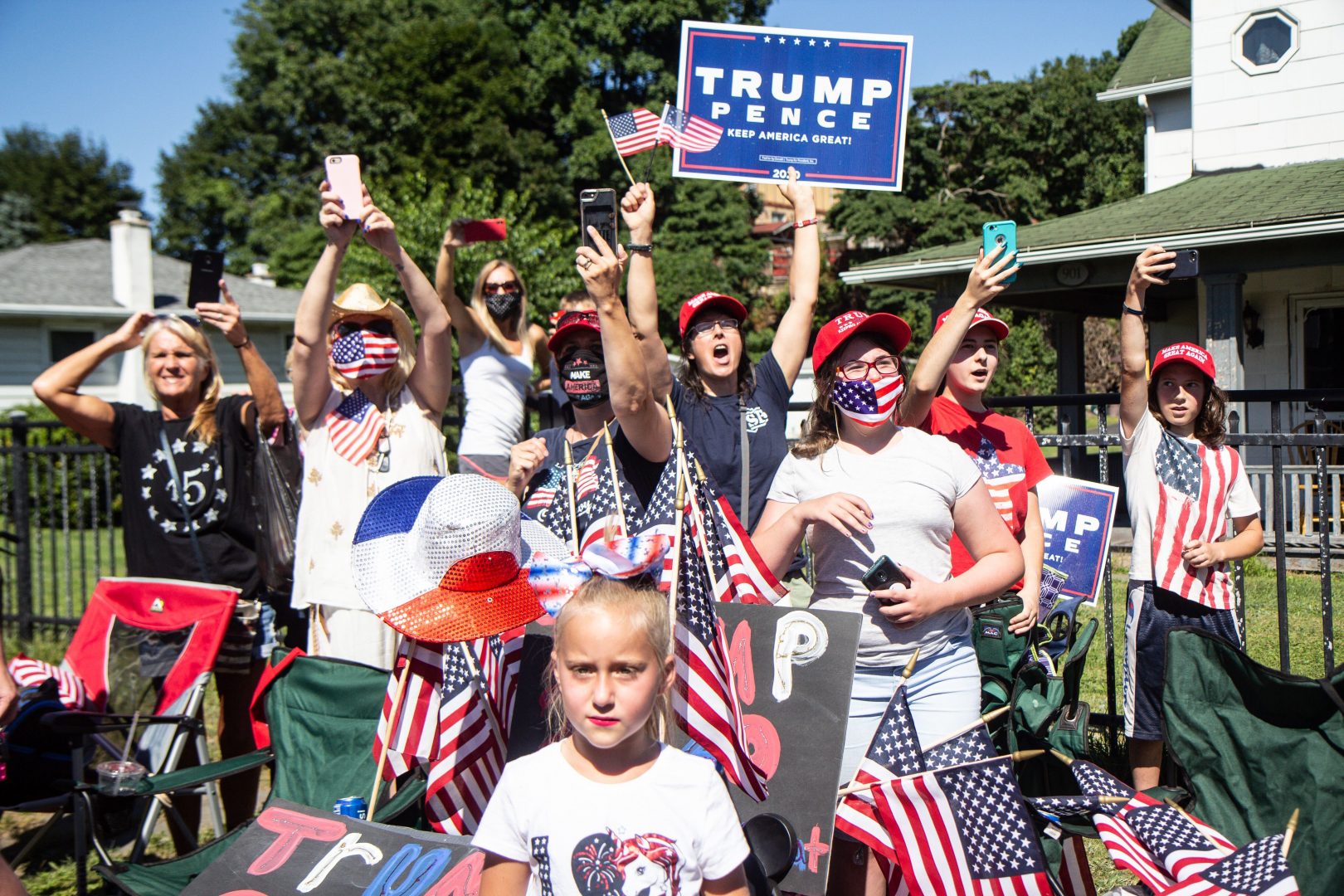 It’s hard to escape the 2020 election when you’re in Scranton, Pennsylvania.

Scranton is a symbol. For Democratic nominee Joe Biden, who lived in the city until he was ten, it’s at the core of his oft-told backstory. When former President Barack Obama introduced Biden as his vice president in 2008, it was as “the scrappy kid from Scranton who beat the odds” — a line his supporters still use.

The city is equally important for President Donald Trump, and his narrative of appealing to unexpected voters. Northeastern Pennsylvania, long home to faithful Democrats, swung hard for Trump four years ago.

Scranton is the Lackawanna County seat, and while Trump didn’t win it in 2016, he captured a lot of Lackawanna votes. About 23,000 more people cast ballots for him than they did for Mitt Romney in 2012 — one of the biggest swings of any county. And neighboring Luzerne County did flip. Barack Obama won it by five percentage points in 2012; Trump won it by 19.

All that to say, as the election creeps closer, it’s hard to throw a rock in Scranton without hitting a campaigner or a news crew.

And on a Thursday afternoon — two days after Pennsylvania U.S. Sen. Bob Casey nominated Biden from the front lawn of the former V.P.’s childhood home, and a few hours before Trump would lead a rally in Old Forge — Don Martin and several of his fellow union members were taking advantage of all the attention. 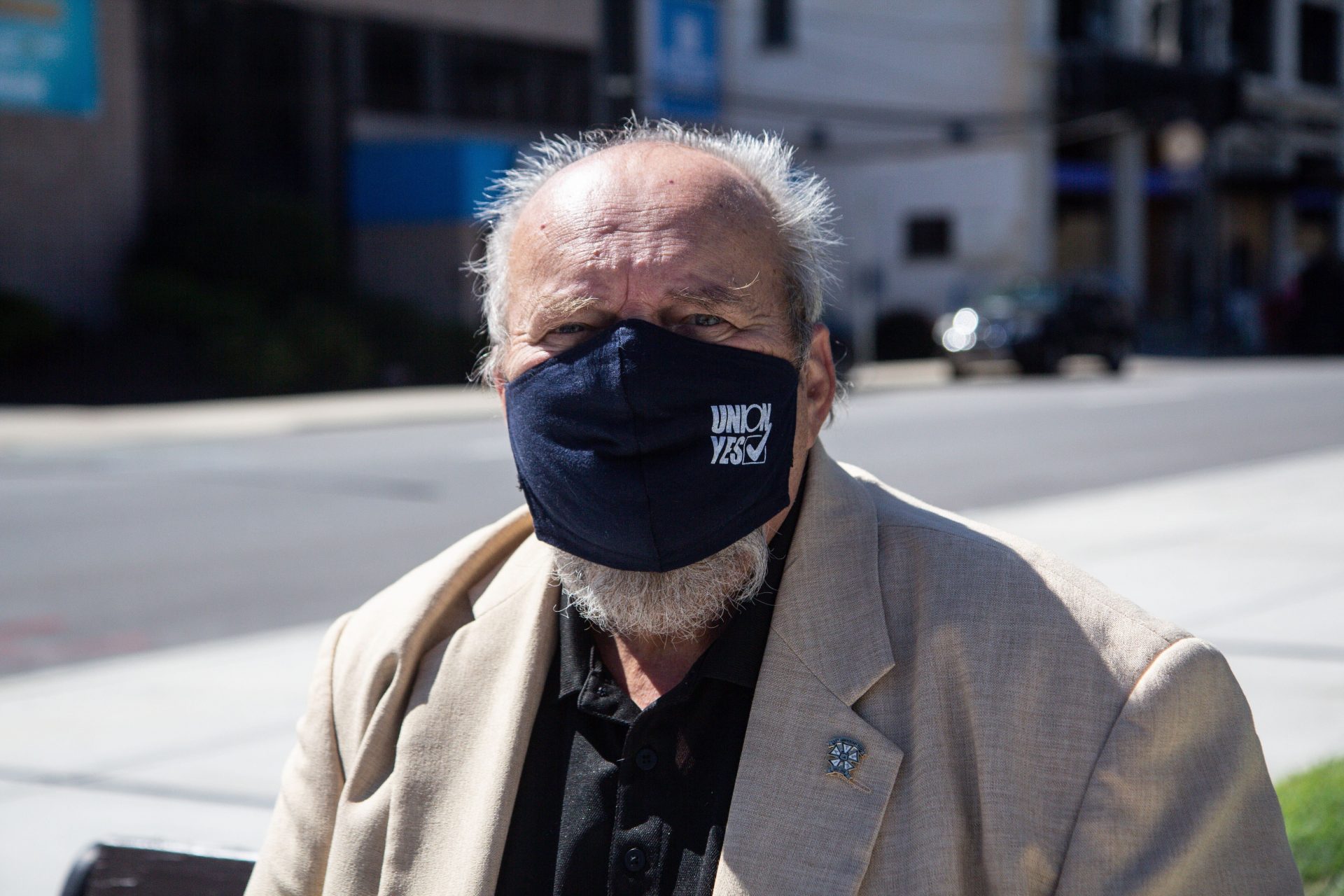 Don Martin is president of IATSE local 329 in Scranton, Pa.

They’re all members of the local chapter of the International Alliance of Theatrical Stage Employees, or IATSE — a sector hard hit by the pandemic. Martin is the president of the local union chapter, and he’s been working in the industry for 50 years.

Martin says it’s a statement of values. If Trump or anyone from his campaign passes by, he wants them to know that people care about unions here, and those unions — or at least, IATSE — think Biden has their back.

“I don’t think that the unions as a whole are liberal,” he said. “I think we’re all conservatives. And what we want to conserve is the right to bargain. We see the [National Labor Relations Board] being nipped away at by legislation and executive orders, and we need protection.”

“This is Scranton, Pennsylvania,” he added. “Without the unions, Scranton wouldn’t be here.” 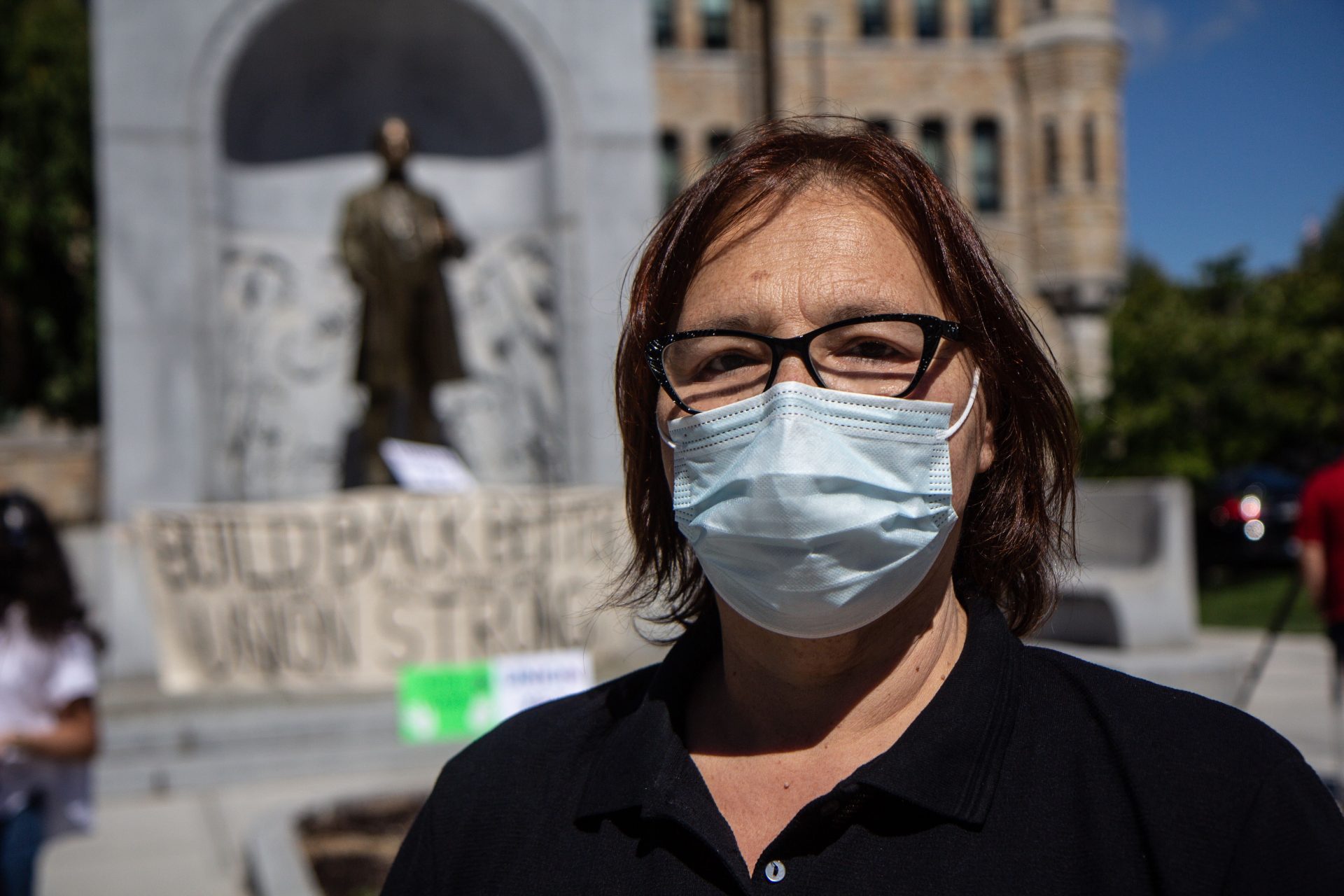 Roxanne Pauline is an IATES stagehand in Scranton, Pa. She helped to hang a banner in support of Joe Biden at the Lackawanna County Courthouse.

Scranton tends to be more liberal than the suburbs and rural areas that surround it.

Even so, Elaine Donly, a social worker conducting a work meeting in the grass outside the Lackawanna County Courthouse, says she feels good about Biden’s chances.

She voted for Vermont U.S. Sen. Bernie Sanders in the primary election and would prefer if Biden were a little more liberal on issues like health care. But she trusts him. 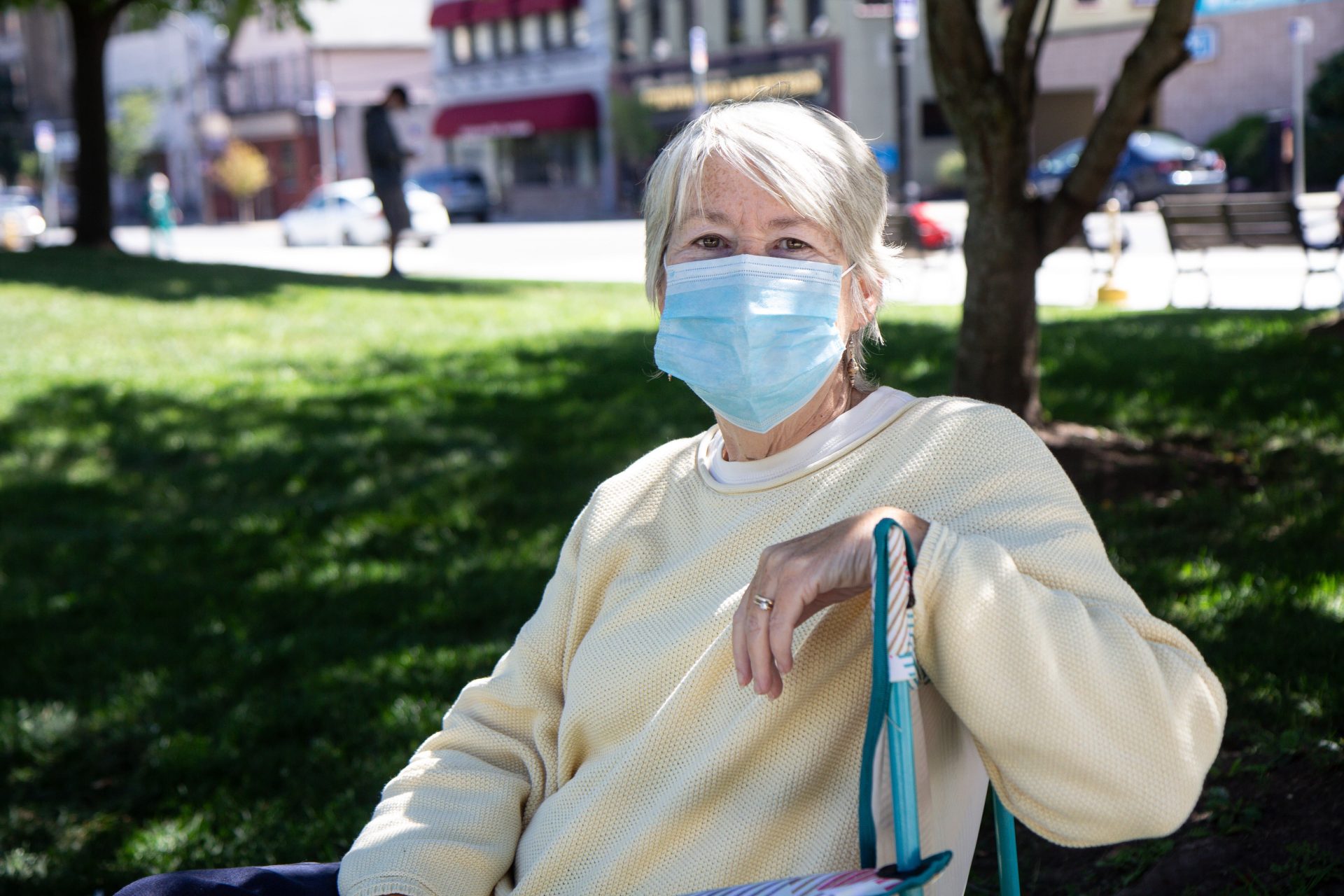 Elaine Donly, a Scranton, Pa. resident, said she’s most worried about climate change and will support Joe Biden in November.

That’s significant because while certain white voters — particularly white voters who don’t have four-year college degrees — were likelier than ever to vote Republican in 2016, Black people were not. Across the country, only about 6% of Black people voted for Trump.

Bernard Graham, who works in maintenance and customer service at the parking garage at Scranton’s Steamtown Mall, says he knows why.

Trump is “divisive,” he said. “Racially, insofar as the way he talks about immigrants, and his past association with women.” 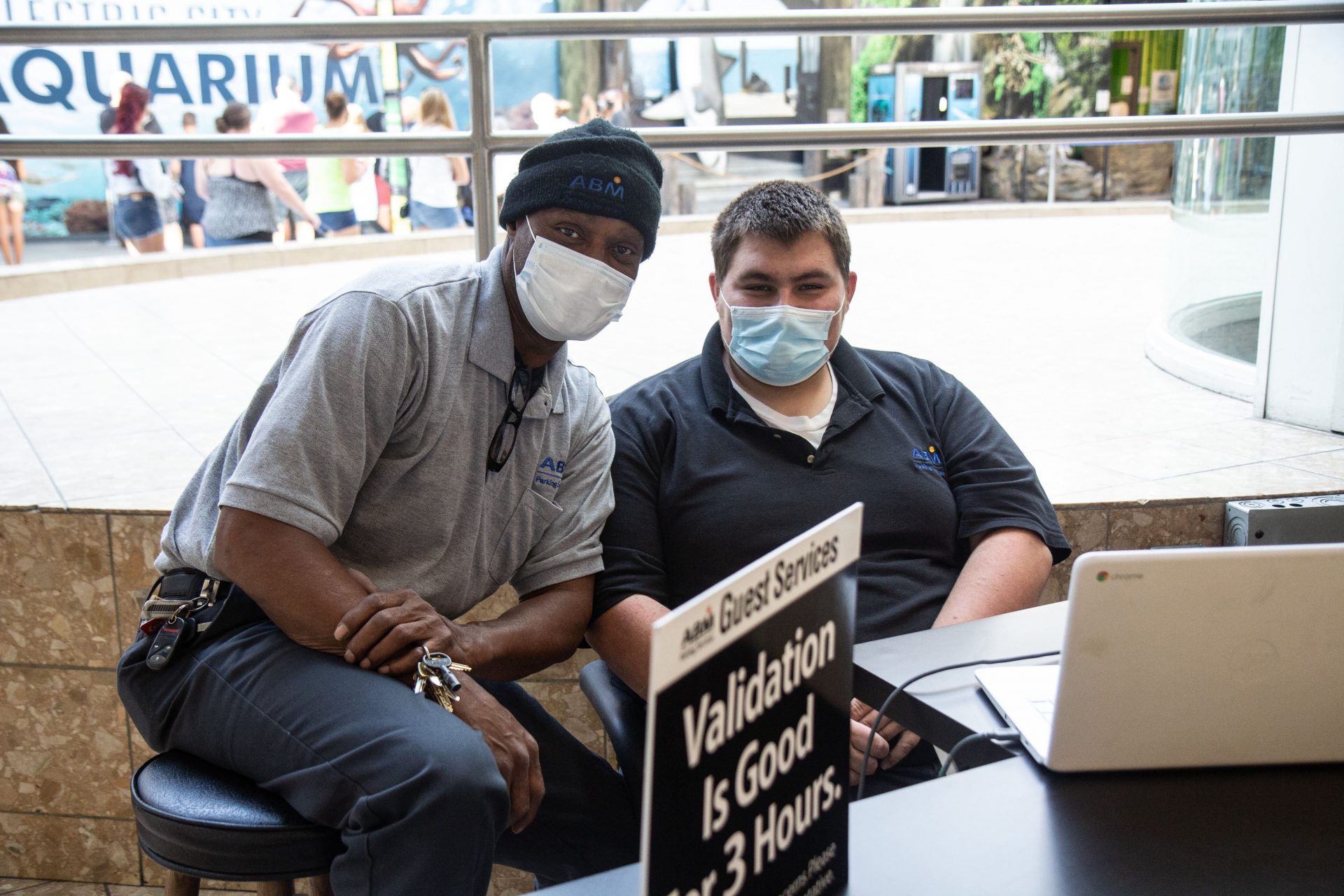 Bernard Graham (left) and Andrew Gale (right) have opposing political views but are friends who work together at the Steamtown Mall in Scranton, Pa.

Lately Graham, who is Black, and his coworker Andrew Gale, who is white, have been having a lot of arguments about politics. Gale, Graham says, “tends to believe anything that Trump says without any research on his own.”

Gale sat beside him at the mall’s customer service booth and protested, saying he does plenty of research online.

“Sometimes it gets a little heated, but we’re friends, so we laugh about it,” Graham said. “I usually win the argument.”

Old Forge, a borough of fewer than 8,000 people about five miles from the city, is the site Trump chose for a rally intended to counter Biden’s formal acceptance of the Democratic nomination.

It’s a historically Italian town, and calls itself the pizza capital of the world. Italian restaurants dot its main strip, South Main Street, and in the hours before Trump arrived in town, those restaurants’ outdoor dining areas steadily filled with people hoping to catch a glimpse of the president. 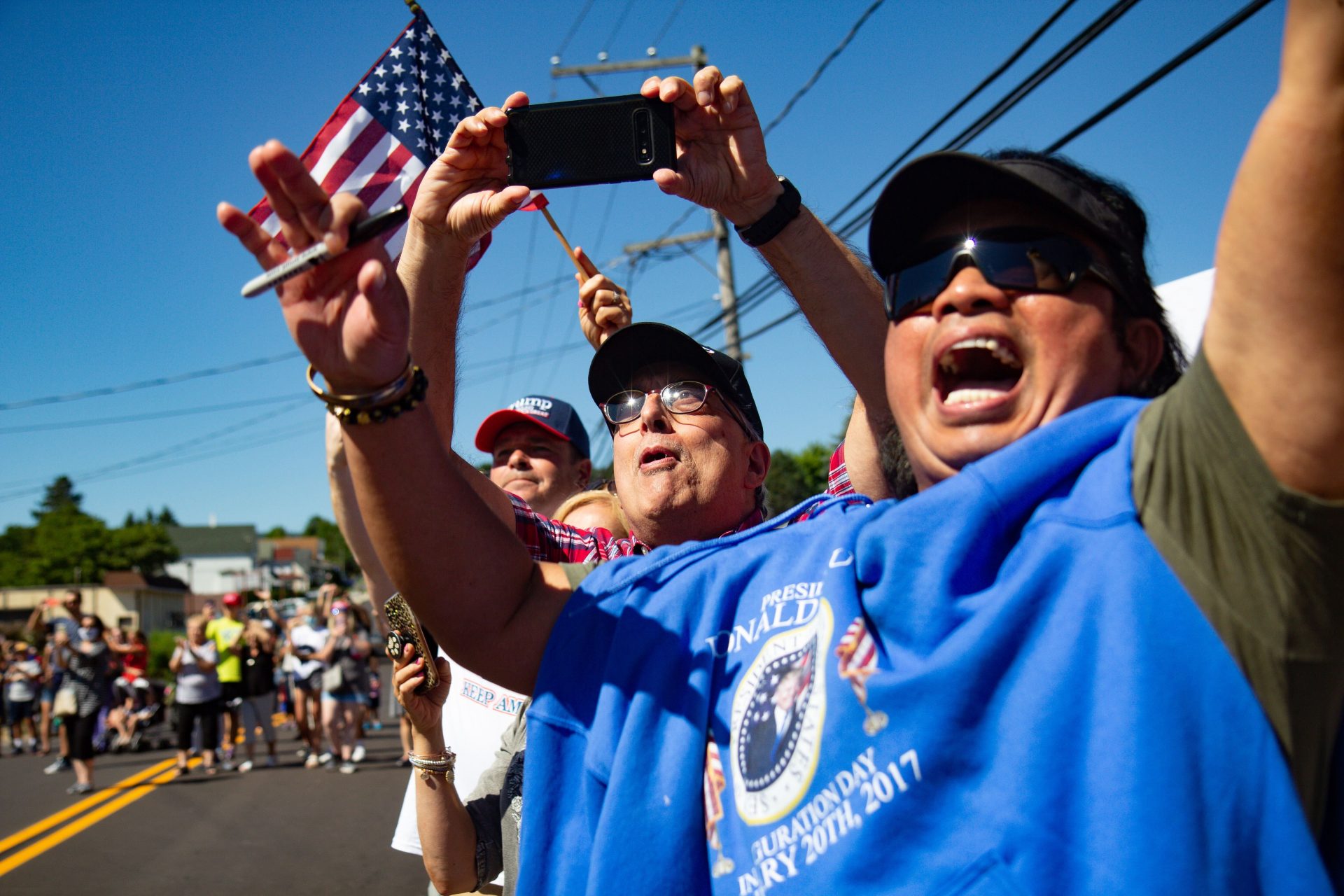 Brian Kincaid and his son, Matt, sat outside Arcaro and Genell, which serves pasta and pizza. They drove in from New Jersey.

“Every presidential campaign, I like to get out,” the elder Kincaid said. “If Biden was nearby, I’d probably go see it too.” He noted though, he supports Trump.

John Revello, a retired construction worker and Old Forge native who sat at a nearby table with his wife, Laurie Olivieri, said he’s similarly ambivalent about political parties. He pretty much always voted for Democrats before Trump, he said — but didn’t like Obama.

He liked the Affordable Care Act. But otherwise, he said, Obama “made us weak in the whole world … he never followed through with any of his words.”

Olivieri isn’t as sure. She and her husband both smile when asked if she’s also a Trump supporter.

For a lot of people in Old Forge, Trump’s visit is a big event. A crowd of about a hundred people lined the street outside Mariotti Building Products, a cabinet manufacturer where Trump made his speech. Many are from nearby, others are from as far away as Florida.

The group Bikers for Trump was out in force, intermittently cheering loudly, while across the street, a smaller, quiet group held pro-Biden signs.

Back up on South Main Street, Merrit Boyle, who owns a personal training business and is wearing a Trump tank top, set up a table draped with red, white and blue bunting and a grill in honor of the presidential visit.

“This area in particular, huge Trump supporters, all the businesses,” he said. 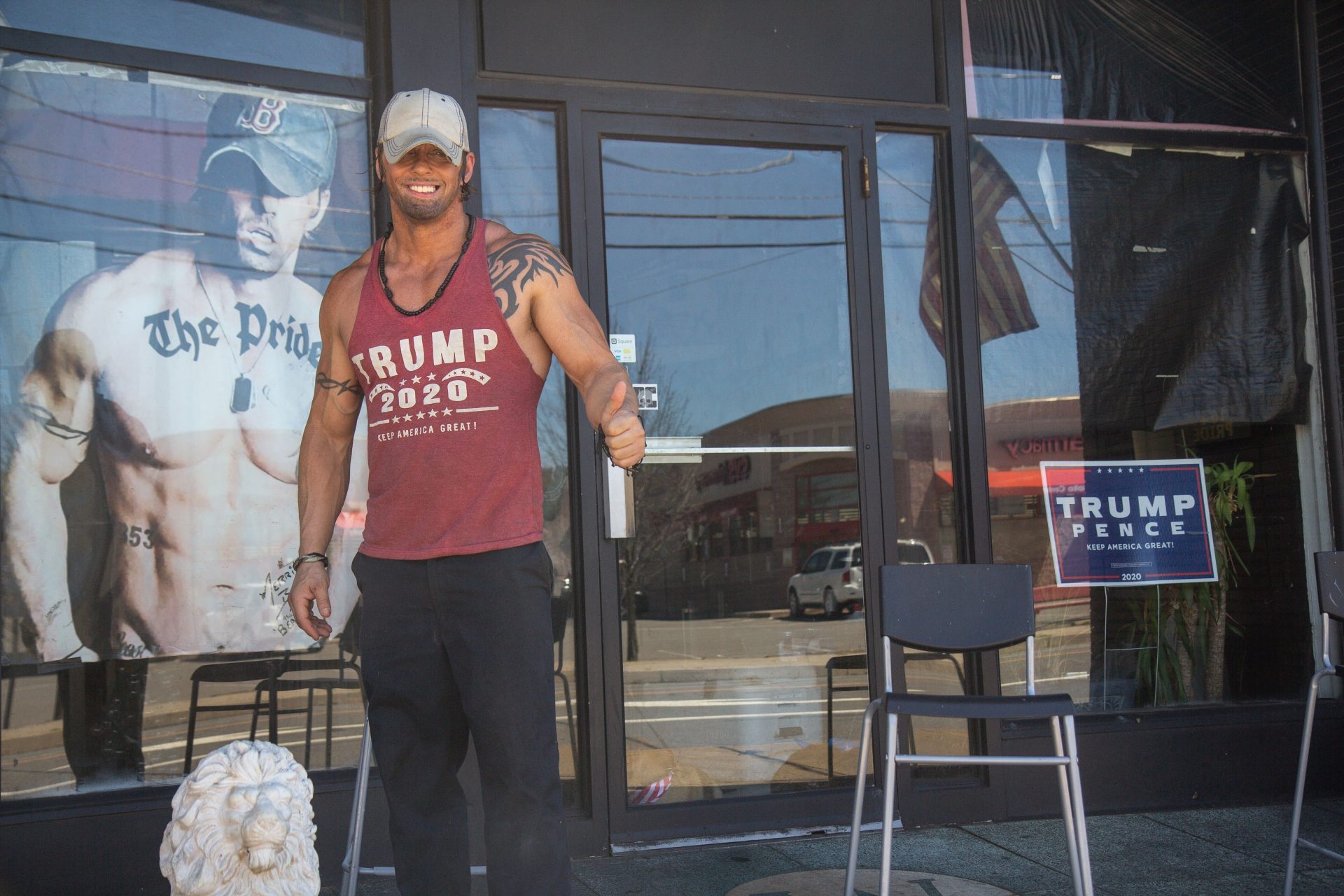 Merrit Boyle, who owns a personal training business in Old Forge, Pa., said he is a Trump supporter but would support Biden if elected.

He noted, though he’d also be fine with a Biden presidency — “he’s a really good man” — and only switched his registration from Democratic to Republican recently. Biden seems like “politics as usual” to him, which he doesn’t like. Trump, he said, seems willing to do unpopular things he thinks will work.

“My whole family all moved to Republican since Trump got in office,” he said. “It was a big switch there.”

All of this — the ambivalence about party, the feeling that things should be shaken up — is common in Old Forge.

Trump yard signs are everywhere — though a significant number of houses do have Biden signs, especially closer to Scranton. Even more ubiquitous are signs declaring “We Support Old Forge Police,” which crop up alongside signs from both parties.

Down the street from Boyle’s fitness center, a bunch of volunteer firefighters with the Old Forge Fire Department sat in the shade of their garage.

The firefighter, Bob Aulisio, has been part of the department here since 1972. The baby, Sophia, is two weeks old and is the daughter of another firefighter. His wife ran home briefly, and they hoped no fires would crop up before she got back.

Aulisio has voted for Democrats and Republicans in the past. He supports Trump now, and says some of his key issues are opposition to abortion, and the fact that he likes when the stock market does well, as it has done under Trump.

But he added, as the other firefighters nodded in agreement, that he tries not to get too invested in politics.

“I think we need to learn to work together as a country,” he said. “Both parties need to get together, start worrying about the people and not the party affiliation.”

Pa. high school students and parents plead "Let us play" in the fall