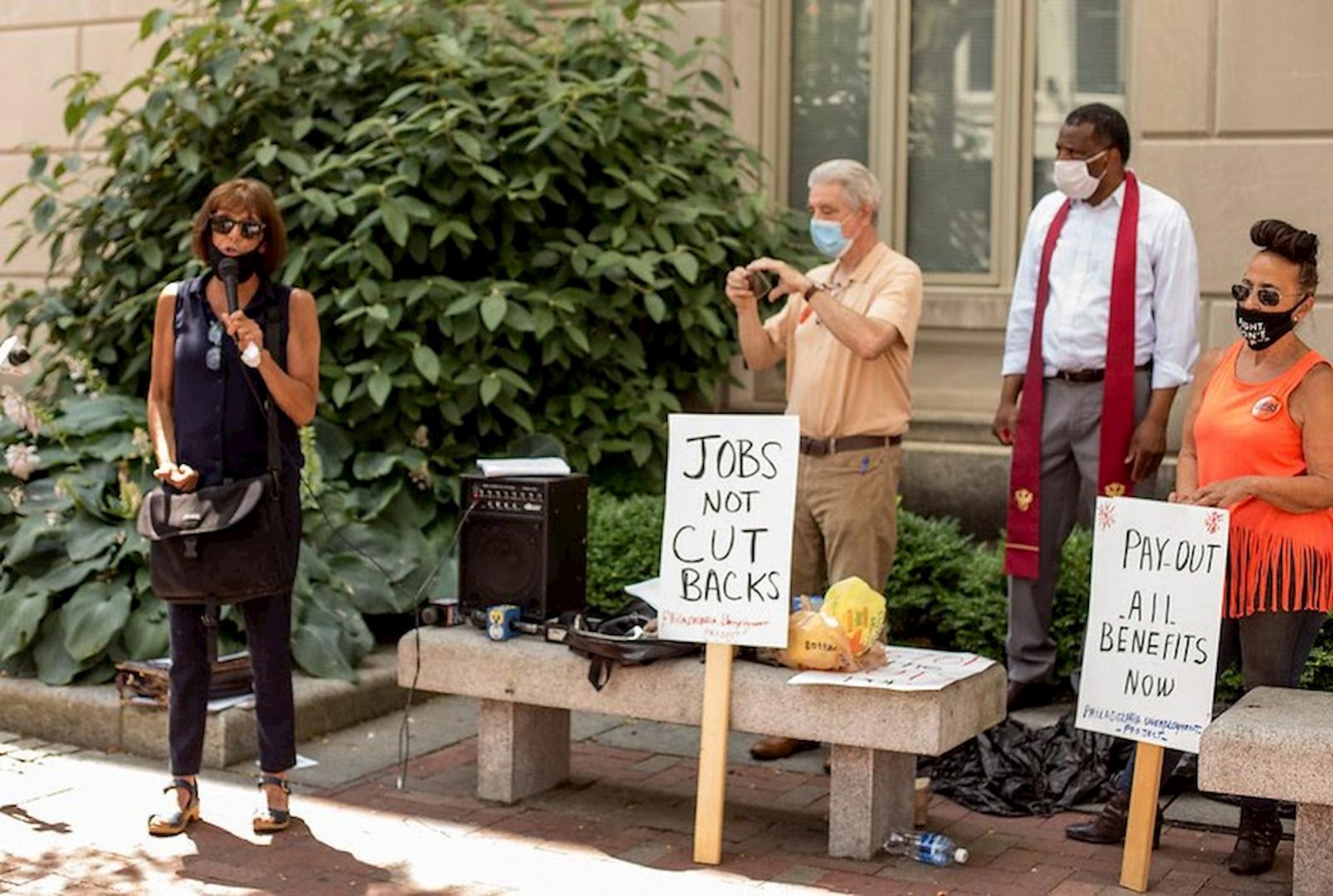 Although every Pennsylvania county is operating in the green phase of COVID-19 recovery, allowing more businesses to reopen, the unemployment rate is still 13 percent. With 1.9 million claims filed for unemployment since March, tens of thousands of people remain both out of work and without all or most of the unemployment compensation they applied for months ago.

While the Philadelphia Inquirer recently reported about 90,000 people who applied for benefits between March 15 and June 20 still have not received them, the state Department of Labor and Industry told WHYY News it did not have a more current figure to reflect claims made in late June and July.

Margaret Krish is one of them. She loved working at Hahnemann University Hospital. She attended nursing school there before working those same halls as an oncology nurse for 25 years. When the hospital closed in September she was heartbroken.

“I spent more hours there than at home,” she said. “It was really like my second family and I really miss it. Driving by the old building is just sad.”

Krish lost her job, then filed for traditional unemployment, which ran out for her in February. Still out of work, she was then told to file for pandemic unemployment in April. The unemployment office sent her a letter saying she was approved for benefits, and then, nothing. No payments have come in the mail.

Hours trying to reach the office became days, then weeks, and now months. Krish has yet to hear anything about the status of her claims.

“I’ve been doing this since April 4th, and I have received zero money,” she said. “The problem is you cannot get through on the phone. I’ve tried 300 to 400 times a day, but every time I got in there, they kept saying it was busy to try another time. So just extremely frustrating.”

This has lasted so long, that Krish has managed to find part-time work, but even that isn’t simple. She lost a week of work, when a chemotherapy patient in her office tested positive for COVID-19 and she had to self-isolate at home.

“I’m a caring, hardworking essential worker,” she said. “Then I’m in contact with someone who has COVID, I have to be tested. Then I’m around my family, my grandchildren. I’m worried about them. Basically, it’s been one thing after another.”

Krish is scared the situation could stretch on for months more. She’s currently getting by borrowing money from family members and spending her savings.

More than anything, she just wants answers. Early into the pandemic, the unemployment office confirmed she should receive benefits.

“I don’t want anything I don’t deserve, but I know that I worked for this and that I deserve it,” she said.

Elizabeth Gray lost her job as part of the economic shutdown brought on by COVID-19. She worked for a law firm in Philadelphia as an independent contractor. When the court system closed, she filed for pandemic unemployment through the state.

She, too, has endured the gauntlet of busy signals, full voicemail boxes and unanswered emails while trying to reach someone to discuss her claim.

“Nobody has once responded to a single email. I then took it a step further: I went to the governor’s office; I attempted to contact him by phone, by email, no response. Pat Toomey’s office and other local representatives, the same: no response,” she said.

She says she’s owed about 14 weeks of unemployment, and considers herself one of the lucky ones being able to live off of her savings and her retirement account.

“It would be fabulous if anyone can just answer the phone and tell you the status of your claim and where you stand, but you can’t even get that,” she said.

Kristen Mitch is one of the people Krish and Gray is desperate to reach. She works as a claims examiner for a state unemployment office based in Harrisburg, one of six offices in the state. She splits her time between the office and working from home in Northumberland County.

She’s part of the team of civil servants trying to respond to the onslaught of claims filed since March. Her schedule has consisted of 12 to 16-hour days, seven days a week. The Juneteenth holiday was her first day off in months.

“I’d had pay periods where I’ve entered 145 hours, which is kind of crazy since our formal workweek is 37-and-a-half. So, yeah, it’s drastically changed.”

She says her schedule has caused her to miss out on spending time with her husband and young son.

“I usually start around 6 o’clock, and I work all day, and that’s literally my day. I don’t do too many other things. On the weekends I get up, work, then maybe go to the grocery store. So there’s not really a whole lot of room for anything else at this point,” she said.

The state says to address an unprecedented demand on the unemployment system, they now have double the staff they did in March. And employees like Mitch have worked 203,000 overtime hours during the pandemic.

Sean Deminico works in the Duquesne office as a claims examiner splitting time between the office and working from home.

His schedule is similar: regular 12- to 16-hour days, seven days a week.

Deminico has been unable to see his family for months. He’s been self-quarantining to protect his 80-year-old mother, and his work schedule has prevented him from seeing his brother, along with his sister-in-law and his niece since March.

He’s worked for the commonwealth for ten years and has never seen this much demand for government assistance. He pleads for patience.

“People need to remember this is a really difficult situation. So many more people are in this than before, and just the fact that we could turn around and administer these programs, that’s a fairly tall order,” he said.

He urges those who can’t reach an operator to keep calling the office, and to contact their local representatives.

The Pennsylvania Department of Labor and Industry says it’s filled 92% of unemployment claims since the pandemic started, with 175,000 claims currently open.

Since March, Pennsylvania has paid out more than $29 billion.