Secretary of State Mike Pompeo speaks at the National Constitution Center about the Commission on Unalienable Rights, Thursday, July 16, 2020, in Philadelphia. (Brendan Smialowski/Pool via AP)

He asserts American institutions no longer “reflect the country’s acceptance of slavery at our founding.” 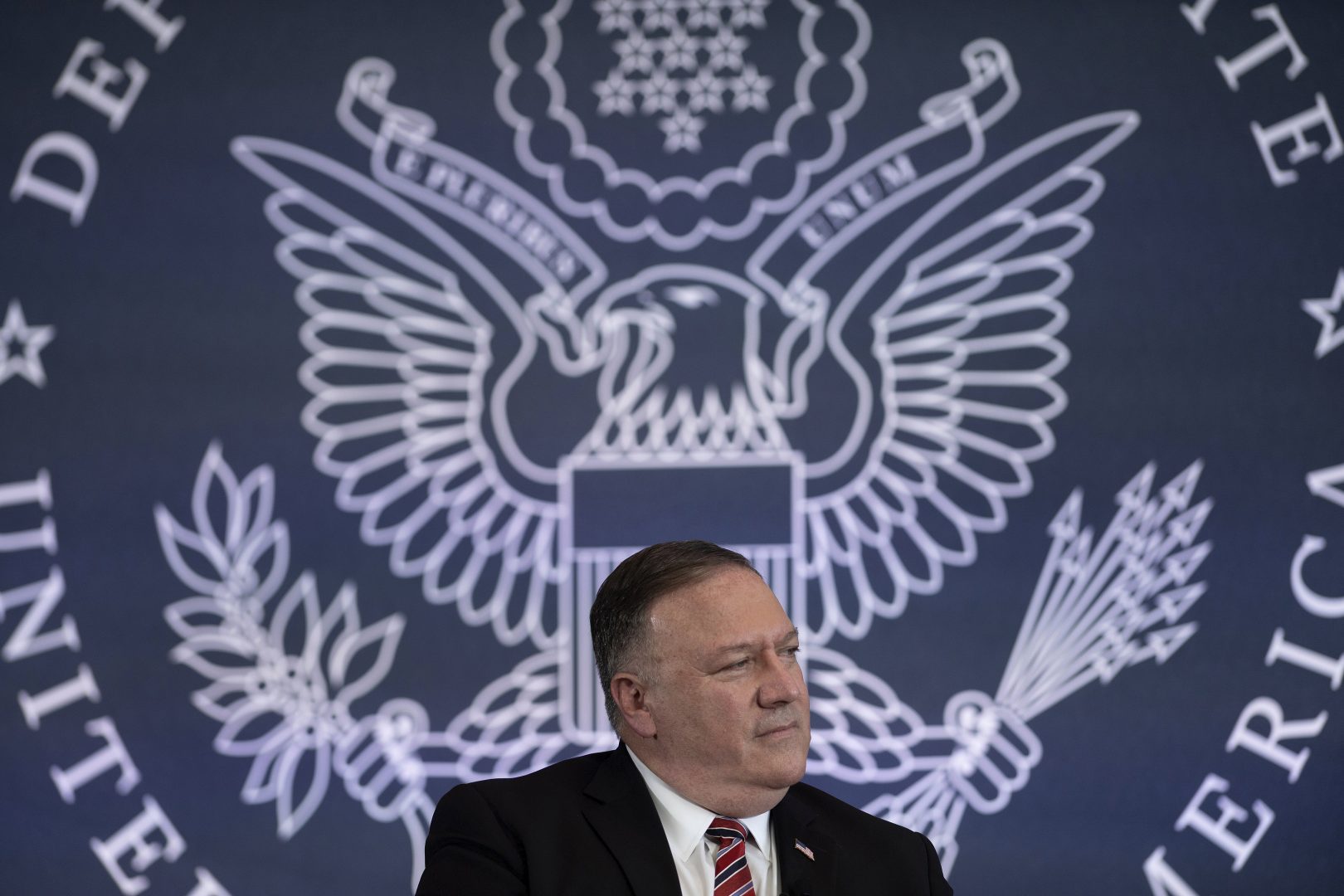 Secretary of State Mike Pompeo speaks at the National Constitution Center about the Commission on Unalienable Rights, Thursday, July 16, 2020, in Philadelphia. (Brendan Smialowski/Pool via AP)

(Philadelphia) — The U.S. State Department has released a draft of a special report on human rights in the U.S. and abroad that acknowledges the country’s historical failings on slavery and racism, but also advises limiting which rights the country considers fundamental.

In a speech presenting the draft at the National Constitution Center in Philadelphia, Secretary of State Mike Pompeo went a step further, asserting that American institutions no longer “reflect the country’s acceptance of slavery at our founding,” and saying that media organizations are promoting false narratives about American history.

The report is authored by an 11-member Commission on Unalienable Rights, formed last year for the stated purpose of providing the Secretary of State with “advice on human rights grounded in our nation’s founding principles and the principles of the 1948 Universal Declaration of Human Rights.”

The group notes early in the report that, like the United States writ large, it is “not of one mind” when it comes to conflicting interpretations of human rights.

Its findings come under the shadow of the COVID-19 pandemic that disproportionately affected the country’s poorest residents, particularly African American and Latino people. They were also released after a month of intense protests about anti-Black racism sparked by Minneapolis police killing George Floyd.

The authors acknowledge that reality, writing that these “social convulsions” attest to “the nation’s unfinished work in overcoming the evil effects of its long history of racial injustice.”

But in his speech introducing the report, Pompeo also criticized the protests, especially the tearing down of statues of various historical figures who, for instance, served in the Confederacy, owned slaves, or perpetuated genocides (for example, Jefferson Davis and Christopher Columbus).

He said those protesters are subscribing to “false doctrines.”

He argued those doctrines are largely being disseminated by the media, and condemned the New York Times’ 1619 Project — so named for the year the first boat arrived in what would become the U.S. carrying African people to be sold into slavery — in particular.

The project launched last year in a stated effort to reframe American history “by placing the consequences of slavery and the contributions of Black Americans at the very center of our national narrative.”

“This is a dark vision of America’s birth,” Pompeo said. “I reject it. It’s a disturbed reading of our history. It is a slander of our great people. Nothing could be further from the truth about our founding and the rights of which this report speaks.”

He continued, saying the Times wants Americans to believe its institutions still reflect the legacy of slavery, and that the country is defined as oppressors versus the oppressed.

“The Chinese Communist Party must be gleeful when they see the New York Times spout this ideology,” he said.

The 58-page human rights report is sprawling, and variously advises against “cultural relativism” in foreign policy in favor of clear guards against what the U.S. defines as repression, and advocates for championing America’s “major traditions” — which it says are “Biblical faith, civic republicanism, and the modern tradition of freedom” — in order to be a “beacon of hope” in its diplomatic relations.

The document then juxtaposes the work of Martin Luther King Jr. against leaders like Malcolm X, concluding at one point that ideas like prosperity for Black Americans being possible “through Black sovereignty rather than through integration” ultimately “proved ill-conceived” despite their merits.

Then, the commission goes on to give its diagnosis of the country’s current conversations on race and equality, which it frames as ultimately being about “how to assess new rights claims.”

Ultimately, it comes down on the side of a more limited definition of rights.

“In divisive social and political controversies in the United States — abortion, affirmative action, same-sex marriage — it is common for both sides to couch their claims in terms of basic rights,” the authors write. “The increase in rights claims, in some ways overdue and just, has given rise to excesses of its own.”

More pointedly, the commission goes on to say that it believes certain ‘rights claims’ are merely based on political preference, and so those protections should not be enshrined in law.

“The temptation to cloak a contestable political preference in the mantle of human rights, which are held to be objectively and universally true, and seek a final and binding judgment from a court, tends to choke off democratic debate, which is itself critical to self-government and therefore to the protection of unalienable rights,” it says.

After the release, Amnesty International was among the first groups to issue a statement on the report, calling it “deeply flawed” and an “effort to cherry-pick human rights.”

“The U.S. government has recently abandoned its seat on the U.N. Human Rights Council, refused to respond to letters of concern by U.N. human rights experts, and now is seeking to deny reproductive rights, LGBTI rights and socio-economic rights, among others – which it frames as ‘divisive social and political controversies’ – by unilaterally redefining what ‘human rights’ mean, and rejecting the interpretive authority of U.N. and other international human rights bodies,” the group wrote.

The U.S. Department of State frequently weighs in on human rights in other countries, but its effort to, as it put it, “provide fresh thinking about human rights discourse where such discourse has departed from our nation’s founding principles of natural law and natural rights” has been seen as a new development.

Ahead of the report’s release, critics of Pompeo and the Trump administration — including the Council of Global Equality and the Center for Health and Gender Equality — had long worried that its findings might be used to curtail things like abortion rights and same-sex marriage. Many of the 11 commission members, the groups said, are similarly-minded defenders of religious liberty, who staked out positions against LGBTQ and reproductive rights.