The maneuvering offers a window into the raw intersection between politics and policy-making in Pennsylvania, and how campaign dollars can drive the legislative agenda. 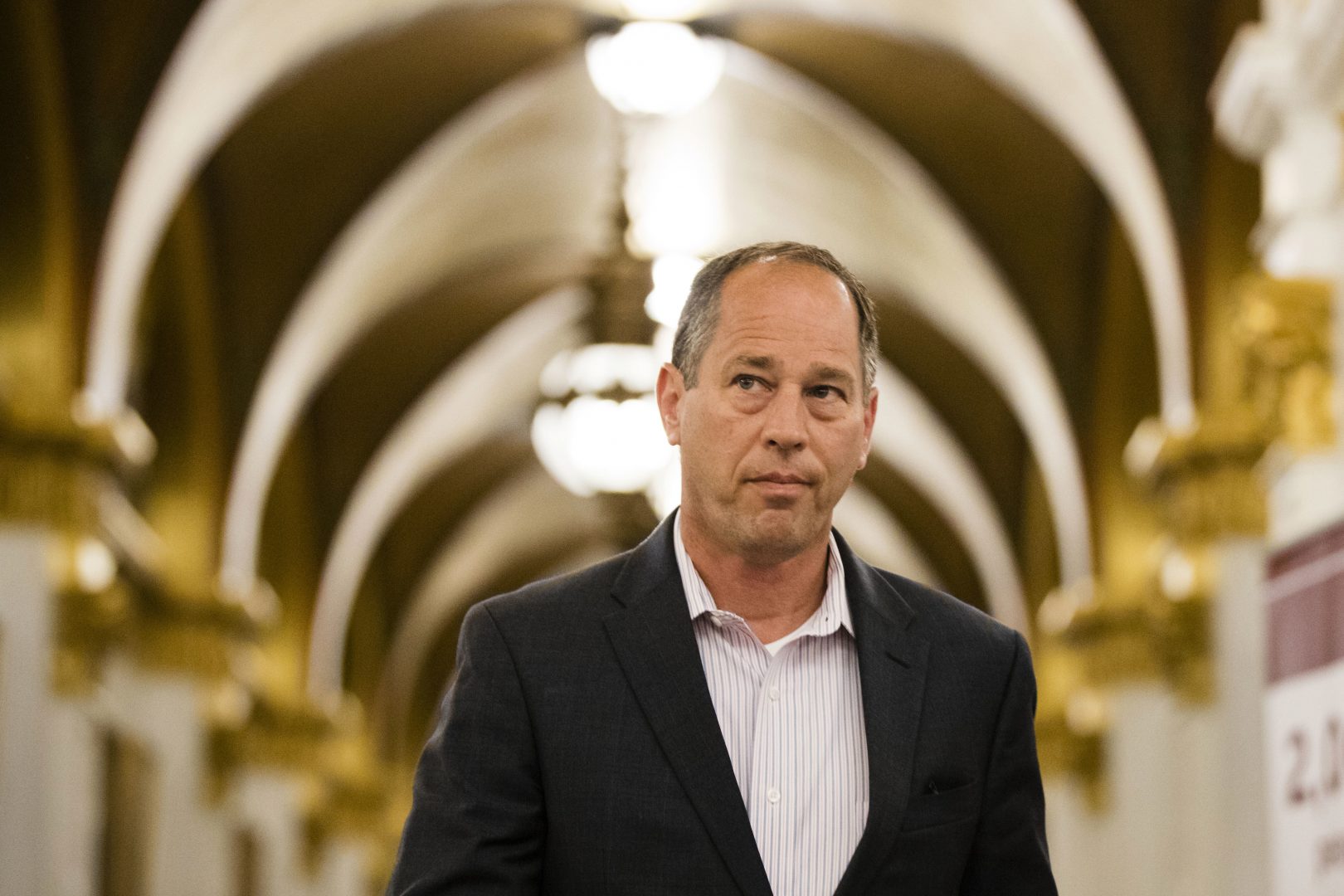 Spotlight PA is an independent, nonpartisan newsroom powered by The Philadelphia Inquirer in partnership with PennLive/Patriot-News and other Pennsylvania reporting organizations. Sign up for our free weekly newsletter.

HARRISBURG — Last fall, more than 2,300 miles from Pennsylvania’s Capitol, the top lobbyist for a gaming company seeking a lucrative gambling expansion helped host a fundraiser in Las Vegas for the leading Republican in the state Senate, Joe Scarnati.

The elaborate event was held at the famed Bellagio Hotel and Casino, records show. For tickets ranging in price from $7,500 to $25,000, donors gained access to rounds of golf, a hockey game, and a cocktail hour and dinner at a glitzy restaurant overlooking the Vegas strip.

Now, Scarnati and other top Republicans are working feverishly behind closed doors to whip up votes for a bill that would help Golden and others like it cash in on the next frontier of expanded gambling, potentially worth millions of dollars: video-gaming terminals, known better as VGTs.

In recent days, lobbyists and top Republican leaders have mounted a full-court press to convince rank-and-file senators to vote for ushering in thousands more of the slots-like terminals, according to two legislative sources familiar with the effort.

The behind-the-scenes push, expected to culminate in a Senate vote as soon as Monday, comes as the legislature faces massive challenges, most notably the fallout from a pandemic that has killed 6,361 Pennsylvanians and ravaged the economy, as well as the largest civil rights protests of a generation and demands for systemic overhauls of the police.

But with lawmakers set to soon depart Harrisburg for a summer of campaigning leading up to the November elections — and Scarnati set to retire from the Senate — the rush is on to expand VGTs. The maneuvering offers a window into the raw intersection of politics and policy-making in Pennsylvania, and how campaign dollars can drive the legislative agenda.

A spokesperson for Scarnati said the senator “typically does not respond to inquiries on bills that have yet to see movement.”

Calls and emails to Golden Entertainment officials were not returned. Dave Thomas, the lobbyist who heads the Harrisburg-based firm that helped organize Scarnati’s Las Vegas fundraiser, declined to comment specifically on the fundraiser or the bill under discussion.

Campaign records and other documents reviewed by Spotlight PA and The Caucus show that gaming operators and their lobbyists have donated tens of thousands of dollars to legislative leaders — and even appear to be drafting the exact language to be used in the expansion bill.

The push for more VGTs has been controversial in a state that has grappled with balancing the rapid expansion of gambling with the need for new revenue. In Pennsylvania, casino gambling was legalized in 2004. Since then, lawmakers have vastly expanded the types of games people can play and where they can play them. That includes VGTs.

They were first approved on a limited basis in late 2017 as part of a hard-fought budget deal between Gov. Tom Wolf and Republicans, who control both legislative chambers. That agreement — which also legalized online gambling and authorized new “mini-casinos” around the state — permitted VGTs, but only at truck stops.

There are now 135 terminals at 27 truck stops across the state.

The proposal now being championed by Scarnati and other top Senate Republicans, including Senate Majority Leader Jake Corman (R., Centre), would allow those machines in bars, taverns, social clubs, and other venues with liquor licenses, vastly expanding their reach — and profits.

Under current law, truck stops brought in nearly $6 million in VGT revenues in the most recent fiscal year. The state takes a 42% cut, and the host municipality another 10%. The steep taxes, however, are indicative of just how lucrative the machines are for operators.

Separately, the proposal also seeks to regulate and tax so-called skill game machines for the first time, which currently are in thousands of venues across the state, including gas stations. That proposal also has powerful and deep-pocketed interests for and against it.

In an interview Thursday, Corman confirmed there is a push to expand VGTs, which he said could raise money to offset property taxes for seniors.

Beyond that, supporters believe expanding VGTs and taxing them will help rake in revenue, not just for the state, but for many small bars whose business has been ravaged by the coronavirus. Detractors counter that the state already has too much gambling. The state’s casinos also fiercely oppose the proposal because they believe it will cut into their earnings.

“We are shocked and alarmed by the persistent speculation that the General Assembly is considering an expansion of gaming to include both broad-based VGT gambling throughout communities and the legalization of currently illegal skill game slot machines that are being operated outside of our facilities,” 13 licensed casino owners and operators wrote in a letter this week to legislative leaders. “The legislature determined that such broad-based gaming expansion would have had a devastating impact on both Pennsylvania’s casinos and the Pennsylvania Lottery. This is even more true today.”

One legislative aide, who asked not to be identified because he was not authorized to speak publicly, said some senators were surprised at the push given the legislature is wrestling with bills related to the state’s coronavirus response and measures to improve police oversight.

As of late Thursday, there did not appear to be a draft of an actual bill. But proposed language written by a lobbyist for the trade association representing gaming operators of VGTs — including Golden Entertainment — was making the rounds inside the Capitol.

In a statement, Jeff Sheridan, a spokesperson for the Pennsylvania Video Gaming Association, did not address why the trade group’s lobbyist had drafted the language, or to whom it was circulated.

Instead, he reiterated the association’s support for the expansion and said it would benefit small businesses “as they recover from the greatest economic and health crisis in our lifetimes.”

The association and its members have pushed hard for placing VGTs beyond truck stops. And gaming operators, their executives, and their lobbyists have also contributed thousands of dollars to campaigns of key decision-makers in the Capitol.

One of the biggest beneficiaries was a campaign committee run by Scarnati.

In a series of stories last year on how some lawmakers are able to hide campaign expenses in their public disclosures, Spotlight PA and The Caucus reported that Scarnati and his campaign advisors began fundraising with casino executives in Las Vegas in May 2018.

According to newly obtained campaign receipts, Scarnati, his wife Amy, and his former chief of staff returned to Las Vegas last October. Almost all of the receipts — totaling $1,757 for their flights and some meals between Oct. 16 and 19 — have handwritten notes indicating they were for a “DT event” or “DT fundraiser.”

“DT” refers to Dave Thomas, the lobbyist for Golden Entertainment and a one-time top House and Senate lawyer. Campaign finance records show Thomas also does campaign work for Scarnati. In the months leading up to the October 2019 fundraiser, for instance, Scarnati’s campaign paid The DT Firm $60,000 for “consulting services.”

According to a copy of the invitation for the fundraiser obtained by the news organizations, the event was a private reception supporting Scarnati that spanned several days. It was held during the same week of the 2019 Global Gaming Expo, which is North America’s largest gaming trade event. It asked guests to RSVP to The DT Firm, and make checks payable to Scarnati’s campaign.

Check-in was at the Bellagio Hotel and Casino on Oct. 17, followed by a hockey game between the Ottawa Senators and the Vegas Golden Knights. The next day included a round of golf at the Cascata Golf Club and dinner that evening at Top of the World, a restaurant in The STRAT Hotel, Casino & Skypod located more than 800 feet above the Las Vegas strip that offers panoramic views as it revolves 360 degrees every 80 minutes.

The STRAT hotel and casino is owned by Golden Entertainment, according to its website.

This year, in the waning days of the primary election, four top executives at Golden Entertainment contributed a total of $42,500 to a political action committee run by Scarnati and his close associates called Citizens for a Better Pennsylvania.

Those were the only donations the committee — which had $581,600 in the bank at the start of 2020 — received all year. They came as Scarnati spent hundreds of thousands of dollars to prop up the failed campaign of his hand-picked successor in Jefferson County, Herm Suplizio.

Most of Scarnati’s spending was to pay The DT Firm, which then paid for advertising related to Suplizio’s campaign.

It is not clear when Thomas’ firm began doing paid campaign work in addition to lobbying, a practice that has been criticized by good government advocates as blurring the lines between politics and policy-making, and between lobbyists and elected officials.

Despite landmark ruling, Pa. GOP leaders in no hurry to extend LGBTQ protections under state law