"I am tired of seeing black lives murdered. I'm tired of being tired."

(Pittsburgh) — It began as a march, one of dozens across the United States, to protest the death of a black man at the hands of Minneapolis police. Thousands marched through Downtown Pittsburgh and the Lower Hill District, and even as they chanted “no justice, no peace,” the police kept their distance.

That changed after about two hours, as police cars were burned, buildings vandalized, and police used tear gas and horses to disperse crowds. Shortly after 7:30 p.m., public safety officials had declared a curfew to go into effect from 8:30 p.m. to 6 a.m. Sunday.

After a barrage of tear gas protesters back up and erect new barricade at fourth avenue @905wesa pic.twitter.com/YbYaHUhyRP

Police Chief Scott Schubert said disruptive elements — many of whom he described as white males dressed as anarchists — had taken “a peaceful protest and turn[ed] it into a riot.

“We’re going to come after you, and we’re going to restore order in the city of Pittsburgh,” Schubert said, addressing the purported anarchists at an evening press conference.

George Floyd died Monday when, video footage shows, former Minneapolis police officer Derek Chauvin pinned him to the ground and knelt on his neck for at least seven minutes.

Saturday’s rally in Pittsburgh began at the intersection of Liberty Avenue and 6th Street downtown. Protesters, most donning masks as a precaution against COVID-19, said they would fight back by showing up to vote in Tuesday’s primary. 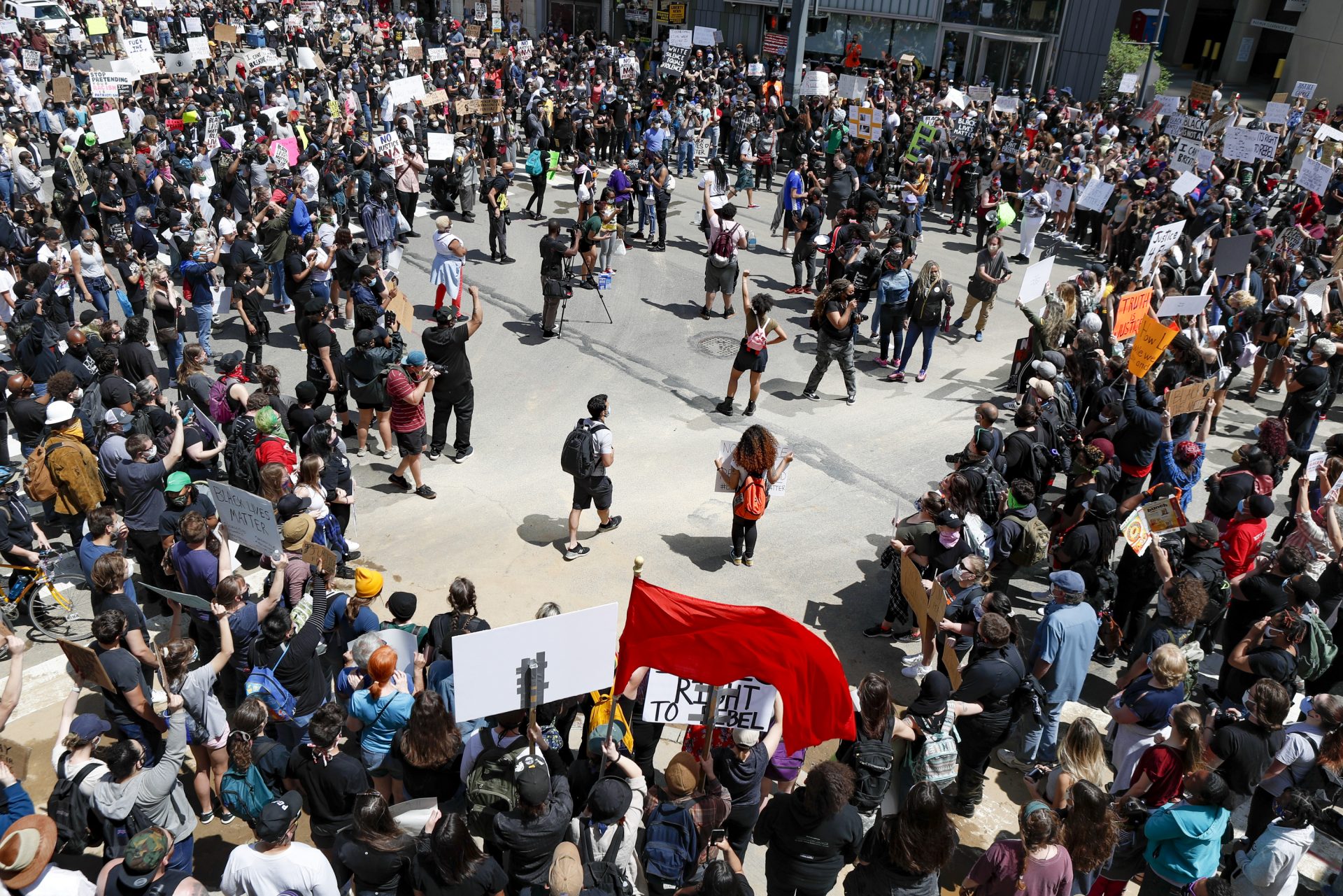 Munhall resident Ciara Bryant said she’d grown up in Minneapolis and spent much of her adult life there. She said she came Downtown becuase “I want to be seen, I want to be heard. And I want change and justice.”

Marchers took a winding course through Downtown and into Lower Hill. Police maintained their distance, but shortly after 4:30 p.m. some marchers shattered windows on a police vehicle near PPG Paints Arena, and a detachment of mounted police rushed to the scene. Protesters threw water bottles at the police (“Don’t hit the horse!” one marcher shouted) and police retreated after a brief encounter. But by that point, a police car had been lit on fire.

“Most [marchers] are peaceful, however a group of protesters overtook and destroyed a marked [police] vehicle,” city public safety officials tweeted a short time later. “Please everyone be safe.” A second police car, this one unmarked, was also set ablaze, as some marchers took to the Veterans Bridge while others confronted police around the arena.

Oakland resident and march participant Andrea Boykowicz said the police response exacerbated tensions. “I witnessed two kinds of escalation,” she said. “The first was when the police showed up on their horses. They’d been witnessing things from a distance until the police car windows were broken, and then they rode their horses into the thick of the crowd.”

The police quickly reversed that course, she said, and march organizers “at that point were like, ‘It’s over, please go home now.’” But as protesters began heading into town, she said, they encountered police with face shields and billy clubs deployed in front of them. There was a standoff, “but it wasn’t clear what the police were doing there, and no one was communicating.” As marchers approached, some threw water bottles. The police threw tear gas, she said, to cover their withdrawal into police vans. But by that point, the march had been fragmented, and as a result, “there was a perception on the part of younger protesters that, ‘Yeah! We did it!’”

Some marchers took down road construction signs and used them to block the on-ramps to the  Veteran’s Bridge and Bigelow Boulevard.

The situation was even more heated as marchers returned Downtown. Store windows were shattered along Smithfield Street, and some looting was reported. Police used tear gas and rubber bullets to disperse crowds, as demonstrators again used signage to erect barricades. Pittsburgh Mayor Bill Peduto warned that “those vandalizing Downtown … will be arrested. You have turned on the very mission, and more importantly — the people, you supposedly marched for two hours ago.”

Chauvin, the former Minneapolis officer who pressed his knee to Floyd’s neck as Floyd gasped for air, was charged Friday with third-degree murder and manslaughter. Chauvin had previously been fired, along with three other officers who stood by during the incident.

Floyd had been in police custody after being arrested for alleged forgery. Video of the 46-year-old’s dying moments shows him calling for his mother and pleading for his life. It has sparked days of unrest across the country, and in some places including Minneapolis, protests have turned violent and even deadly.
Prior to the protest, police agencies were calling for restraint on the part of demonstrators, and often expressing sympathy for the cause. Pennslyvania State Police Lt. William Slaton told reporters in a mid-afternoon press call that protests to that point had been peaceful — although even as he spoke there were reports of tear-gas and a damaged police vehicle from a protest underway in Harrisburg. In protests across the nation, he said, disruptions were being caused by “provocateurs and extremists were very often not from the community. … They leave these communities with destruction.”

Pittsburgh police chief Scott Schubert weighed in Friday, saying in a statement that “a person in handcuffs and face-down on the ground should not lose their life due to the action or inaction of the involved officers.”

“I simply cannot comprehend the actions of the officers [who did not help Floyd] or their lack of moral courage and duty to intervene and stop the action before it was too late,” Schubert said.

He added that he wants lessons from Floyd’s death to “help reinforce our training and policies” in Pittsburgh.

Marchers also took down road construction signs and used them to block the on-ramps to the Veteran’s Bridge and Bigelow Boulevard.