A cyclist wears a protective mask as she peddles past others walking through Allegheny County's North Park, Saturday, May 16, 2020, the first weekend after the March "Stay at Home" order put in effect to inhibit the spread of the COVID-19 pandemic, had been lifted in the southwestern Pennsylvania region.

Your daily coronavirus update: All of Pennsylvania poised for at least a partial reopening

Gov. Tom Wolf said Friday he is easing some pandemic restrictions in Philadelphia and the heavily populated suburbs on June 5, while lifting them almost entirely in 17 rural counties next week as Pennsylvania continues to emerge from a shutdown imposed nearly two months ago to help slow the spread of the new virus.

Wolf is accelerating his reopening plan even though more than 20 Pennsylvania counties remain above the state’s target for new infections that were supposed to qualify them for an easing of pandemic restrictions — and eight counties are more than three times over.

Local elected officials, Republican and Democrats alike, have been pressing for shutdown relief amid skyrocketing unemployment, as have small business owners who are struggling to keep afloat.

Wolf is taking action amid a partisan blame game over whether governors or the president is responsible for the economic wreckage. That fight could have enormous implications in the November election in this presidential battleground state.

The Democratic governor is moving Philadelphia, Berks, Bucks, Chester, Delaware, Lackawanna, Lancaster, Lehigh, Northampton and Montgomery to “yellow” on June 5, meaning that people will be able to freely leave their homes and retailers and other kinds of businesses will be allowed to reopen, though other restrictions remain.

Eight counties are moving to yellow a week earlier, on May 29: Dauphin, Franklin, Huntingdon, Lebanon, Luzerne, Monroe, Pike and Schuylkill.

Health officials have said they were working on specific guidelines for counties in the green phase.

In other coronavirus-related developments in Pennsylvania on Friday:

The Pennsylvania Department of Health on Friday reported 115 additional deaths linked to COVID-19, raising the statewide total to 4,984.

Two-thirds of the state’s deaths have been among residents of nursing homes and other facilities that care for older adults.

State health officials also reported that 866 more people have tested positive for the new coronavirus. The state has recorded fewer than 1,000 new cases for 12 consecutive days.

These are the latest figures in central Pennsylvania counties:

Since early March, infections have been confirmed in more than 66,000 people in Pennsylvania.

The Pennsylvania Department of Health says people who have tested positive for coronavirus antibodies — and who also had symptoms of COVID-19 or a high-risk exposure to the virus — are being added to the state’s running tally of infections. 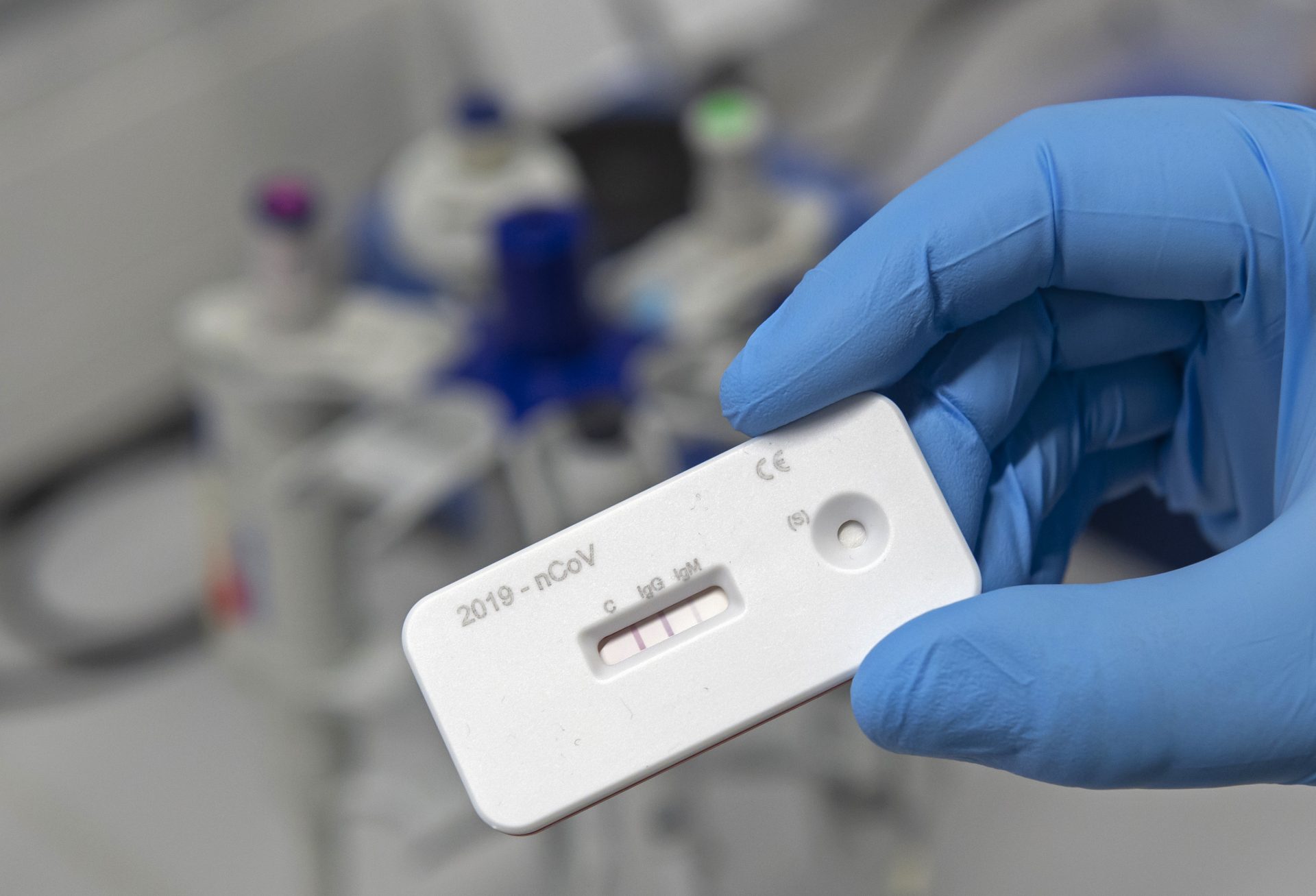 A scientist presents an antibody test for coronavirus in a laboratory of the Leibniz Institute of Photonic Technology (Leibniz IPHT) at the InfectoGnostics research campus in Jena, Germany, Friday, April 3, 2020.

Unlike tests for active infections, antibody tests are blood tests that can detect whether someone was infected at some point in the past. Positive antibody tests represent 481 cases, or less than 1 percent, of the state’s overall tally of more than 66,000 infections, according to Health Department spokesman Nate Wardle.

Pennsylvania splits its virus tally into cases that are confirmed by virus testing and probable cases. Positive antibody tests are considered probable cases. Health authorities say they do not count probable cases for the purpose of deciding when a county is ready to reopen.

“What’s very important to note is we only use the count of confirmed cases when we’re looking at any metrics in terms of counties going from red to yellow, or yellow to green, or any other transition,” said the state’s health secretary, Dr. Rachel Levine.

The Wolf administration is loosening its ban on foreclosures and evictions.

A tenant who damages property, breaks the law or breaches the lease in some other way can now be evicted under a modified executive order issued by Wolf on Friday. 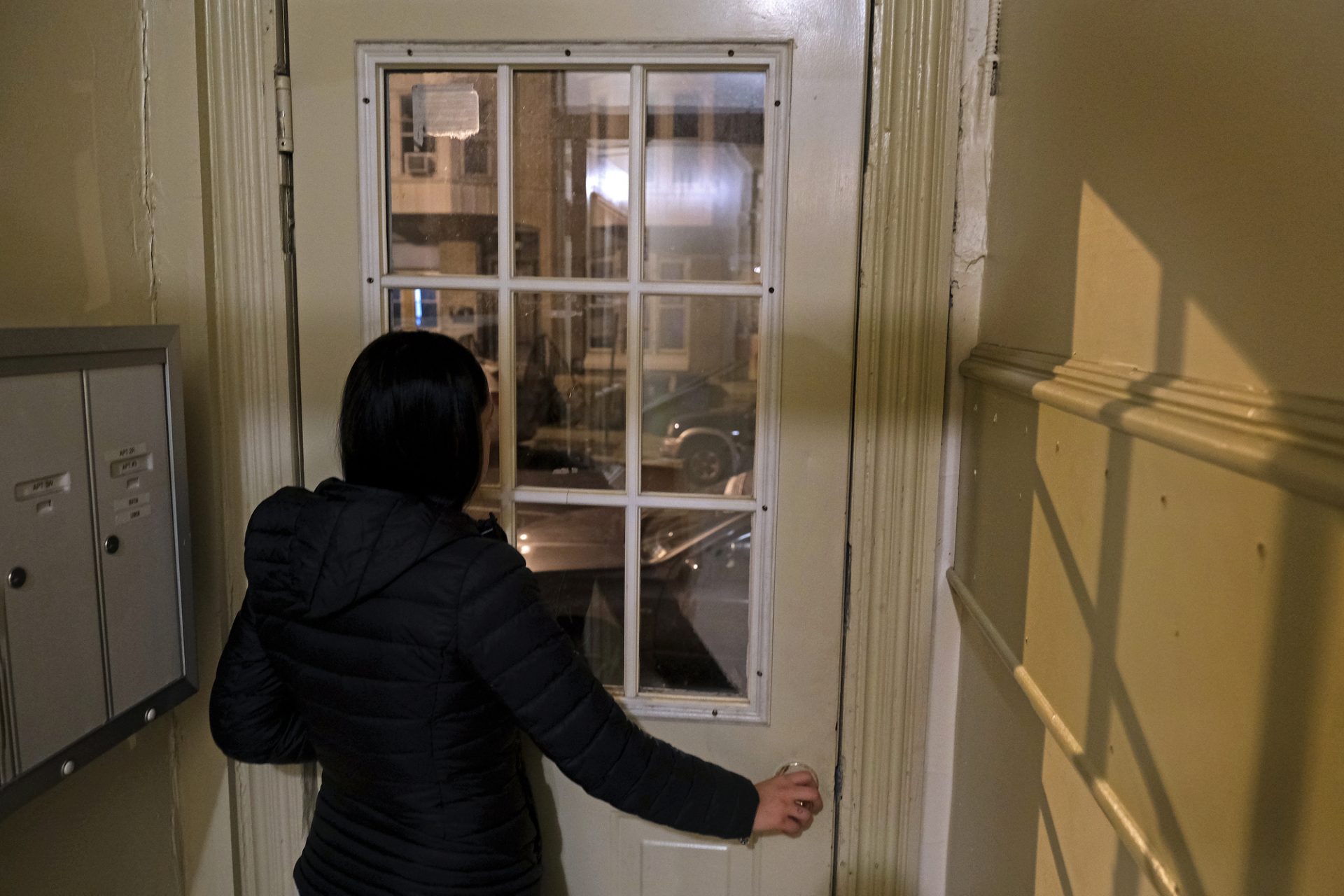 FILE PHOTO: A woman who had been evicted several times stands in the doorway of her current residence Nov. 20, 2019, in Reading, Pennsylvania.

The temporary ban still applies to evictions and foreclosures for nonpayment or because a tenant has overstayed a lease. The moratorium is scheduled to last until July 10.

“I am protecting housing for Pennsylvanians who may be facing economic challenges due to the COVID-19 pandemic,” Wolf said in a written statement. “My order will not affect proceedings for other issues, such as property damage or illegal activity.”

The Wolf administration has been fighting legal action by landlords who say the governor overstepped his authority by imposing a moratorium on evictions. His spokeswoman, Lyndsay Kensinger, said the decision to amend the executive order was considered before the litigation was filed “in consideration of feedback from stakeholders.”

The federal government on Friday began distributing $238 million in emergency aid to Pennsylvania nursing homes that have been hit especially hard by the virus.

The U.S. Department of Health and Human Services said it is making payments to 587 nursing homes. Each nursing home will get a fixed payment of $50,000, plus $2,500 per bed. The money can be used to pay staff, boost testing capacity, acquire protective equipment and for other expenses associated with the COVID-19 pandemic.

Nursing homes have seen declining patient populations and increased costs as they struggle to contain the virus. Long-term care residents account for about two-thirds of the statewide death toll of more than 4,800, a higher proportion than in most other states.

The site at the Mohegan Sun Arena at Casey Plaza in Wilkes-Barre, Luzerne County, opened April 20 and tested more than 2,000 people. Luzerne County has been among the state’s hot spots for the new virus, though its infection numbers have been trending down.

The state health secretary, Dr. Rachel Levine, said in a written statement that “it is time we redirect these resources to other areas of our state that are in need of assistance in this pandemic.”

The public testing site will continue to offer testing through May 29.