Some counties could see practically all of the state's pandemic restrictions lifted in the coming days.

May 21, 2020 | 12:24 PM
With our coronavirus coverage, our goal is to equip you with the information you need. Rather than chase every update, we’ll try to keep things in context and focus on helping you make decisions. See all of our stories here.

Some counties in Pennsylvania could see practically all of the state’s pandemic restrictions on business activity and gatherings lifted in the coming days, other than social-distancing and health-monitoring guidelines that are in place to help stop the spread of the coronarivus.

Thursday’s announcement by Gov. Tom Wolf — that some counties could get to move to the least-restrictive “green” phase of his three-color traffic-signal reopening plan stages — could become official on Friday. 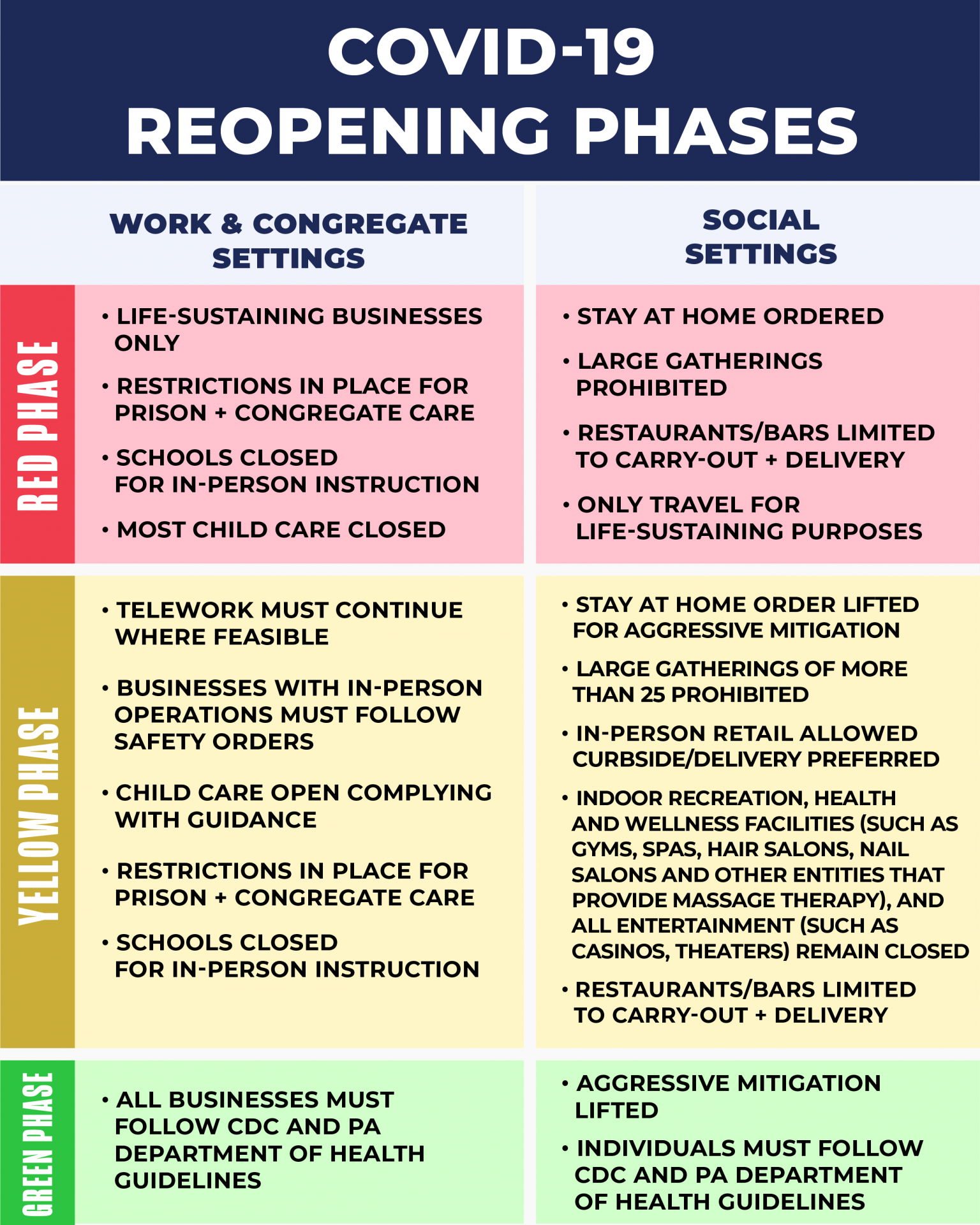 “So I’ll be announcing a whole range of counties tomorrow moving from red to yellow and the hope is that we’ll also be making some counties that might even be moving from yellow to green tomorrow,” Wolf told reporters on a conference call.

With the number of new infections slowing, Wolf has been easing social distancing restrictions and allowing many businesses to reopen in lightly impacted areas of the state.

It is not clear, exactly, what restrictions, if any, will remain in place in the green phase.

“As we release the metrics to go into the green zone, we’re also working on what life in the green zone would (look) like, especially for businesses, restaurants, etc.,” Levine said Thursday at a video news conference.

Eighteen mostly eastern Pennsylvania counties that are home to 60% of Pennsylvania’s 12.8 million residents — including Philadelphia and its heavily populated suburbs — have yet to receive word as to when they will leave the red phase.

Wolf’s stay-at-home order still applies in the red phase, as do many restrictions on business activity that lift in the yellow phase.

In other coronavirus-related developments in Pennsylvania on Thursday:

The Pennsylvania Department of Health on Thursday reported 102 additional deaths linked to COVID-19, raising the statewide total to 4,869.

Two-thirds of the state’s deaths have been among residents of nursing homes and other facilities that care for older adults.

State health officials also reported that 980 more people have tested positive for the new coronavirus. The state has recorded fewer than 1,000 new cases for 11 consecutive days.

Here are the latest figures for central Pennsylvania counties:

Since early March, infections have been confirmed in more than 65,000 people in Pennsylvania.

The number of infections is thought to be far higher than the state’s confirmed case count because many people have not been tested, and studies suggest people can be infected without feeling sick. There is no data on how many people have fully recovered.

With the number of new infections slowing, Gov. Tom Wolf has been easing social distancing restrictions and allowing many businesses to reopen in lightly impacted areas of the state.

The Pennsylvania State Police announced that Wolf has granted an additional extension to license to carry firearms permits. Permits, which expired on March 19, 2020 or later, have now been extended to July 31, 2020.

The extension of license to carry permit expiration dates is necessary due to the closure of some county courthouses and sheriff’s offices, as well as other ongoing COVID-19 mitigation efforts.

Gov. Tom Wolf signed legislation Thursday that lawmakers passed overwhelmingly as a way to provide some outlet for bars and others to make money while they are shut down or limited during the state’s pandemic restrictions on in-house dining and drinking.

There are limits on the drinks.

The drinks must be sold as mixed drinks in quantities no larger than 64 ounces in a sealed container, and not after 11 p.m.

To sell the drinks, hotel and restaurant licensees that offer meals to-go must have lost at least 25% of their average monthly sales due to coronavirus restrictions.

Licencees can continue selling the drinks after the state’s disaster order if they are operating at less than 60% of their normal business.

Wolf said he didn’t necessarily think the legislation was a good idea, but noted its overwhelming support in the Legislature as a lifeline to bars and restaurants.

Meanwhile, bars and restaurants in counties that have been minimally impacted by the coronavirus are asking to be allowed to seat customers again, at least outside.

Those bars and restaurants should be able to open decks, patios and courtyards, at up to 50% of the outdoor maximum seating capacity and with tables at least 6 feet apart, the Pennsylvania Licensed Beverage and Tavern Association said.

Parking lots also could be used to offer limited seating, roped off with a single entry point, while the bars and restaurants could offer live entertainment, with restrictions on noise levels, the group said.

As the virus continues to ebb, the association said it wants establishments to be able to seat patrons inside, with the same social-distancing rules as outside.

Pennsylvania’s Department of State approved Philadelphia’s plan to consolidate some 850 polling places into 190 polling places for the June 2 primary election that will be conducted while the city is likely to still be under the governor’s coronavirus stay-at-home order.