Using part of the Pittsburgh International Airport parking lot, that has been left vacant by the COVID-19 pandemic, volunteers from the Greater Pittsburgh Community Food Bank, load boxes of food into cars during a drive-up food distribution, Wednesday, April 22, 2020.

As governors contemplate reopening, here’s what restrictions look like in each state

NPR is tracking developments in all 50 states, Puerto Rico and the District of Columbia so you can see what's changed and how states compare.

COVID-19 has affected the entire country, but each state has its own measures in place to try to slow the spread and repair the damage.

While the White House announced federal guidelines for a phased reopening of the country on April 16, President Trump has acknowledged that “each state is very different.” Governors have responded to the guidelines largely along party lines, and many have since unveiled their own frameworks for reopening their states’ economies safely and gradually. Some have even announced regional partnerships to coordinate the easing of restrictions.

Trump has said that some states may choose to begin reopening even before May 1. Many states have already extended stay-at-home orders, prolonged school closures, and delayed elections until after that date. Others are set to reevaluate and perhaps lift certain restrictions by the end of April. Several have heard calls from protesters to do so.

Each day brings changes. NPR is tracking developments in all 50 states, Puerto Rico and the District of Columbia so you can see what’s changed and how states compare. To stay on top of the latest updates, scroll down or click on the state’s name from the list below.

Here’s what each one has done so far. 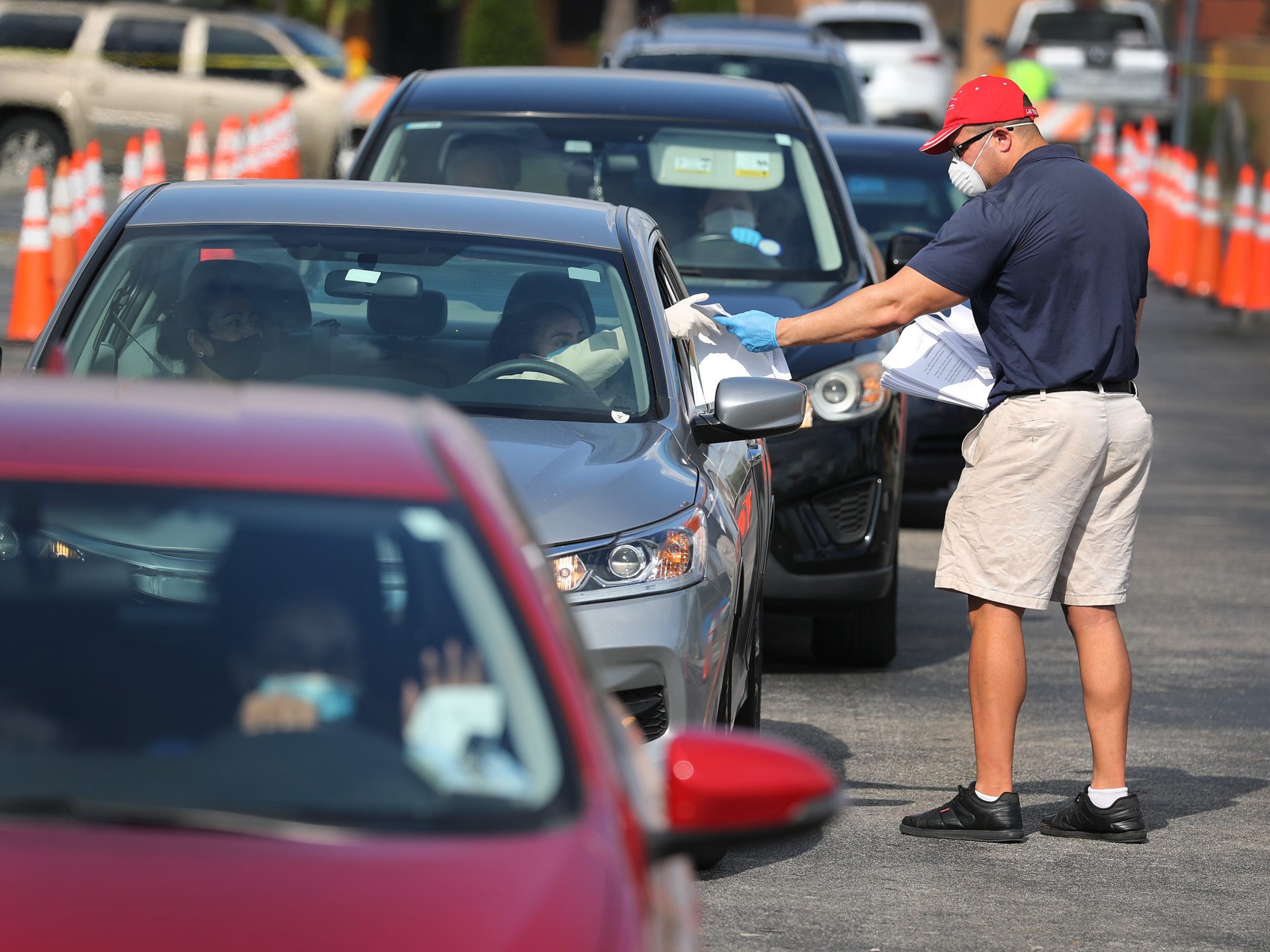 Miguel Diaz hands out unemployment applications to people in their vehicles on April 8 in Hialeah, Fla. Black, Latino and Asian American workers have lost jobs at a faster clip than white employees during the coronavirus pandemic. The popular Hog Island Co. oyster bar sits empty at the Oxbow Public Market, but remains open for takeout orders only Thursday, March 19, 2020, in Napa, Calif. As worries about the spread of the coronavirus confine millions of Californians to their homes, concern is growing about those who have no homes in which to shelter. In this April 17, 2020, photo, Zachary Davis poses for a photo at The Penny Ice Creamery in Santa Cruz, Calif. An investigation by The Associated Press hows that many large companies which collectively received tens of millions of dollars in federal loans through the Paycheck Protection Program were at risk of failing even before the coronavirus walloped the economy, while others have acknowledged problems keeping their finances straight and a few have been under investigation by the Securities and Exchange Commission. That big companies and ones with questionable records received such precious financial aid during the chaotic last few weeks frustrates Davis, “We were feeling pretty good about where we were in the world. Now it’s just all turned upside down,” said Davis, who had to lay off 70 workers. A postal worker wears protective gear against the coronavirus as he collects articles of mail outside a supermarket in Omaha, Neb., Friday, April 10, 2020. A woman purchases meat at Broad Street Market in Harrisburg on April 10, 2020. The market is much quieter since the coronavirus pandemic effectively shut down the region. School buses are parked at a depot Thursday, April 9, 2020, in Zelienople, Pa. Pennsylvania Gov. Tom Wolf said Thursday that schools will remain shuttered for the rest of the academic year because of the coronavirus pandemic. Jason Dapper, shoots a street hockey puck at the fence in one of the tennis courts at the local park as he practices his hockey skills with his wife, Friday, March 27, 2020, in Zelienople, Pa. The couple said they have taken to the park since the local rinks have closed with the outbreak of COVID-19.

This is a developing story. We will continue to update as new information becomes available.

Despite protests, including Harrisburg's, most Americans still support coronavirus restrictions