(Philadelphia) — A special election for a vacant state House seat in Bucks County proceeded Tuesday as scheduled, despite the fact the region is largely shut down to mitigate the spread of the coronavirus.

The 18th District seat encompasses only the municipality of Bensalem. The candidates are Democrat Howie Hayes, a union plumber and relative newcomer to the district, and Republican K.C. Tomlinson, a funeral director, lifelong Bensalem resident and daughter of a state senator. 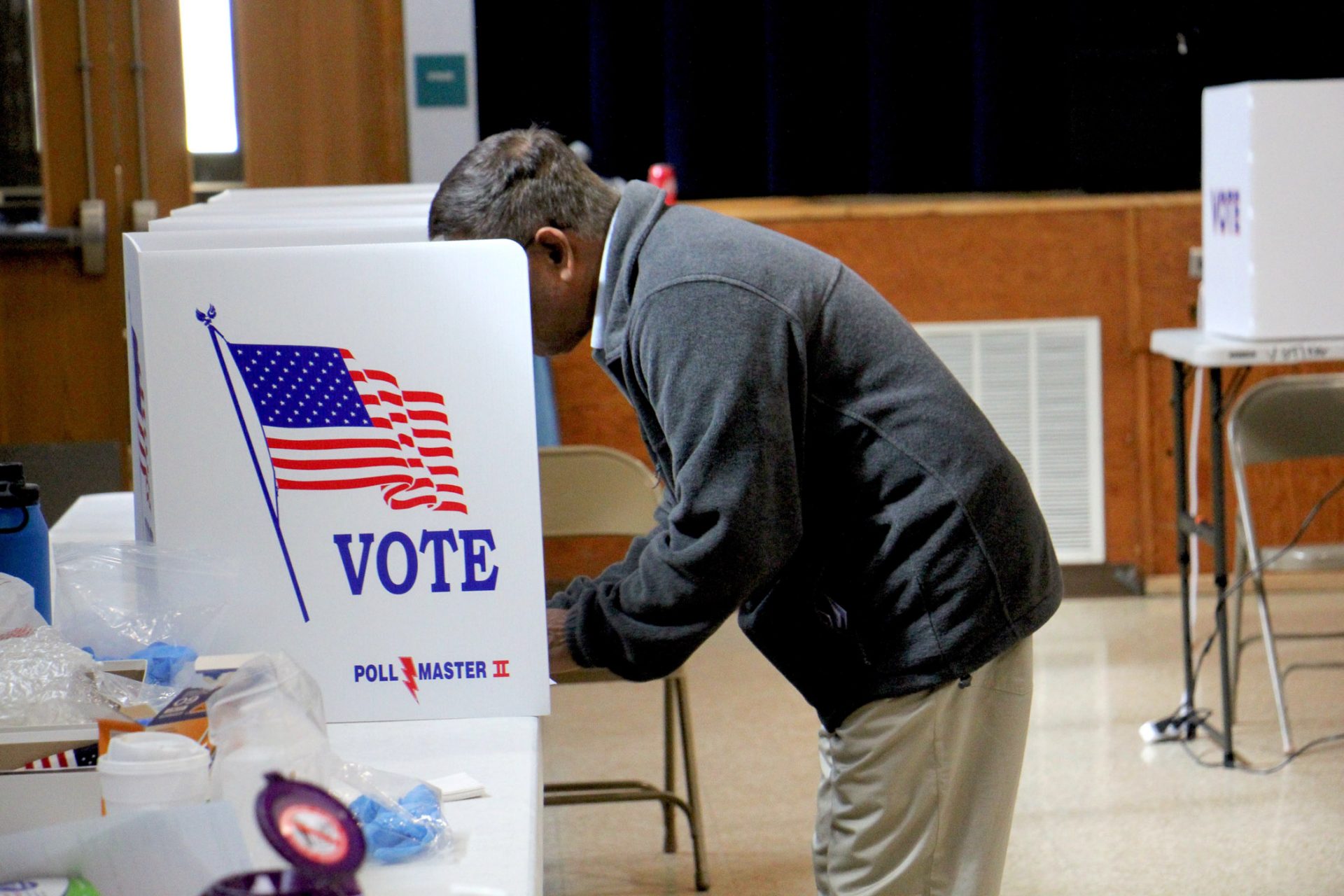 A voter fills out a ballot at Cecelia Snyder Middle School in Bensalem during a special election to choose a new member of the Pennsylvania House of Representatives.

Both spent Election Day traveling from polling place to polling place, handing out sanitizer and bumping elbows instead of shaking hands.

Asked how they feel about the timing of the election, both said the past week has been stressful as the number of COVID-19 cases have mounted.

“Just trying to get through the day as safe as possible,” Tomlinson said at a stop to a polling place. 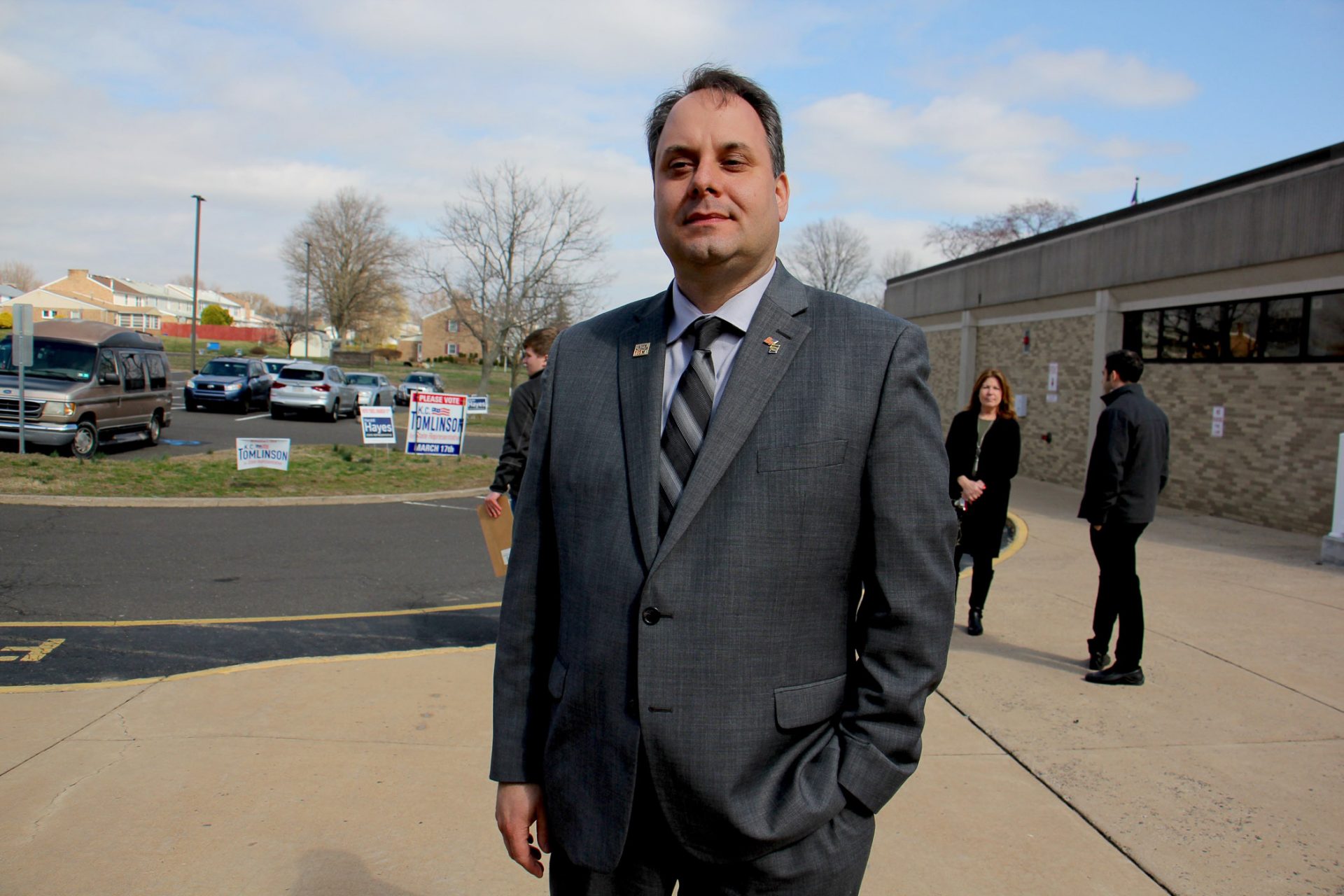 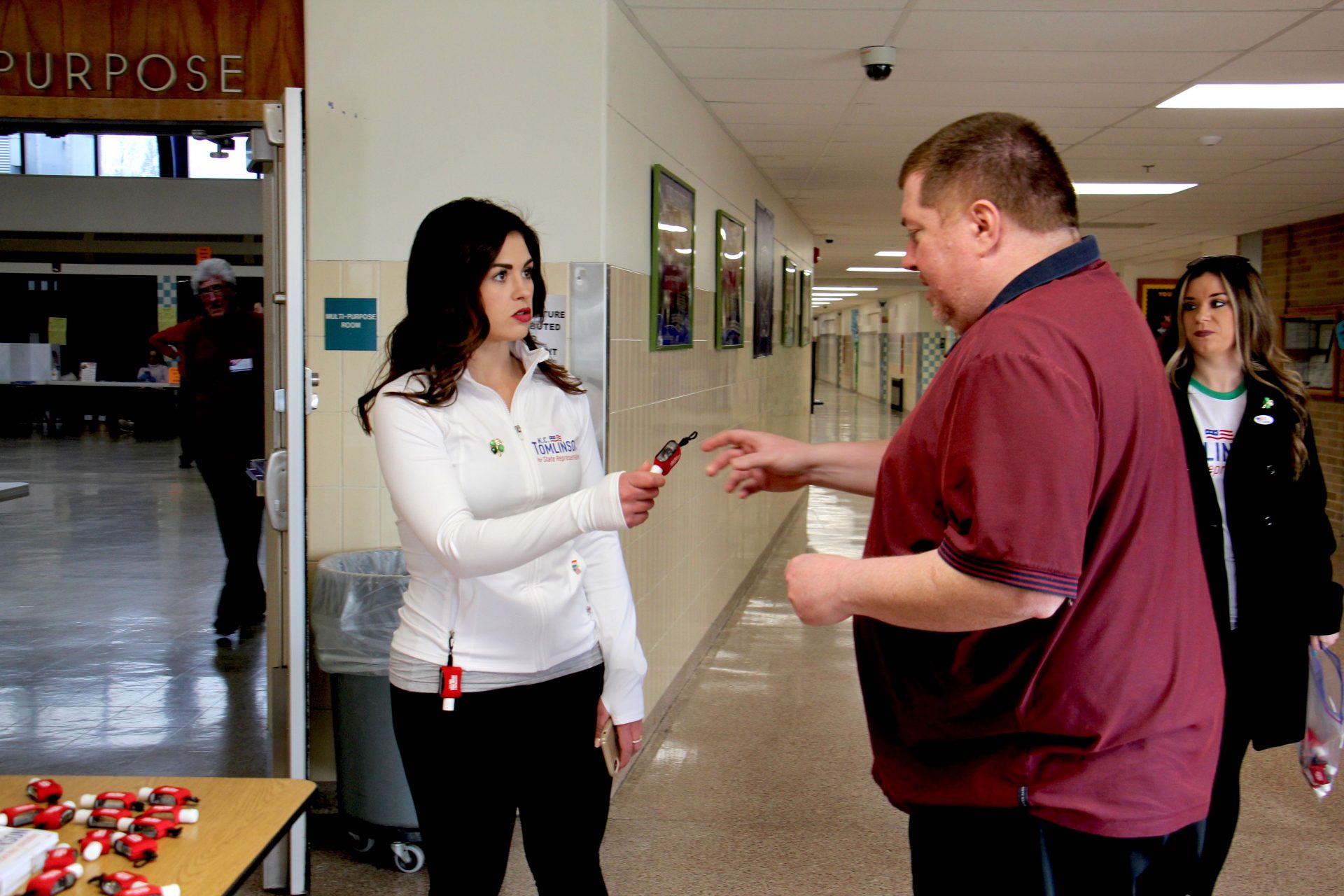 K.C. Tomlinson, Republican candidate for state House of Representatives, hands out bottles of hand sanitizer to voters at a polling place at Cecelia Snyder Middle School.

“The wheels of democracy keep turning. It is what it is and we’re here,” he said.

With schools empty of students, the polls there were unusually quiet. Most poll workers wore rubber gloves and periodically wiped down tables with disinfectant.

Voters didn’t often linger to chat, and if they did, they hovered a few feet from the people they were talking to. Many, like Toby and Stuart Kahn, brought their own pens.

The Kahn’s have been hearing about the virus “constantly,” Stuart said. Toby added, “We have kids all over the country and they keep calling us making sure we’re okay.”

“We canceled our whole life and we’re housebound,” he added. 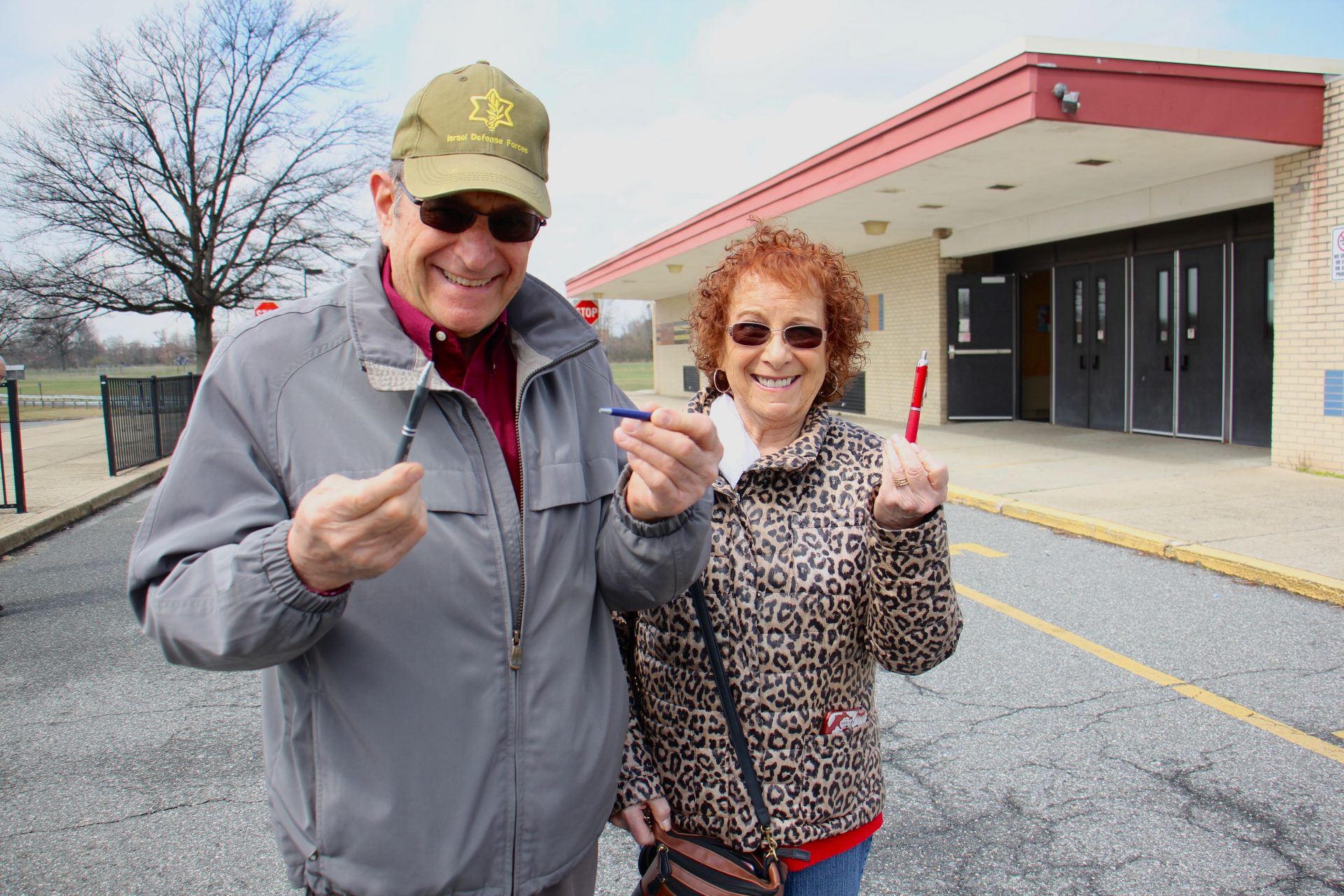 Bensalem voters Toby (right) and Stuart Kahn brought their own pens to Cecelia Snyder Middle School to vote in a special election for the district’s representative in the Pennsylvania House.

The question of whether the election would even be held was in flux until late the night before.

Citing concerns about coronavirus spreading at the polls, Bucks County made a last-minute attempt Monday night to postpone the vote, by filing an injunction in the county Court of Common Pleas.

Hours later, Judge Jeffrey Trauger denied it, writing that the court could “find no legal authority for the relief requested, and counsel for the Board of Elections could not cite to any statute or decisional law expressly empowering this court to stay or postpone a duly constituted legislative election.”

Trauger directed the board to “continue all necessary safety measures, including but not limited to the provision of hand sanitizer, sanitary wipes, rubber gloves, masks and signage reminding voters of any recommended and appropriate social distancing.”

Felix Romero, the judge of elections for the Lower East No. 4 precinct, says he was nervous as Election Day started.

Right off the bat, he had a problem: All of his scheduled poll workers called off, and he had to manage the early votes on his own before the county elections board could dispatch replacements. 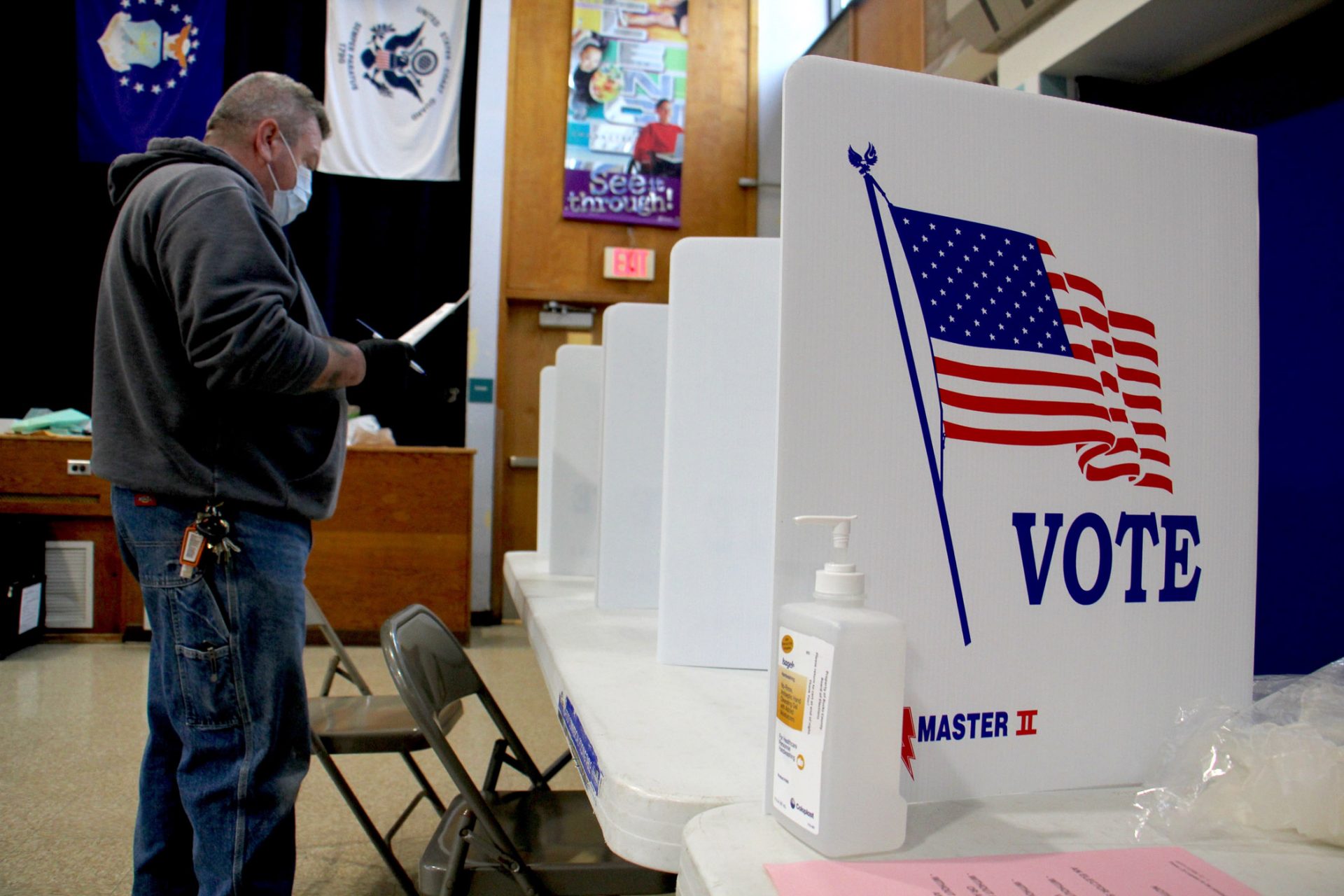 But as the afternoon rolled around, he said things were going well — both with sanitizing efforts, and with the new paper ballot voting machines the county is using for the first time.

Around 1 p.m. he said around 6% of his precinct’s registered voters had turned out — which he estimated was a bit lower than a typical special election, but better than he’d expected during a global pandemic.

“We’ve been pleasantly surprised that people are coming out in spite of all the fears that are present and the reality of those fears,” he said.

That’s an assessment many poll workers and local politicians shared — though some were more satisfied with the outcome than others.

Jesse Sloane, a Democratic Bensalem Township Councilmember, says over the last week, he repeatedly called House GOP Leader Mike Turzai — who controls the election date — to ask him to delay it.

Sloane says he believes Turzai’s decision not to move the election was political.

“Postponing the election could coincide it with the primary election, and that would potentially benefit Democratic candidates,” he said.

He’s not the only Democrat raising that concern. The state House Democratic caucus issued a statement accusing Turzai of ignoring coronavirus concerns to “steal” the election.

Turzai has previously said he made the decision not to postpone the election after consulting with longtime chamber parliamentarian Clancy Myer, who wrote that he believes changing the election would be too confusing, especially as absentee ballots had already been submitted.

“It is not only not advisable, but also counterproductive to issue a new writ of election establishing an election date later this spring,” he said.

For the most part, the voters who turned out said they weren’t terribly concerned about contracting coronavirus at the polls.

Toby and Stuart Kahn, the couple with children worried about their well-being, said they felt strongly enough about supporting Tomlinson to venture outside their self-quarantine.

“I’m just looking for K.C. to carry on the tradition of her predecessor,” Stuart Kahn said, referring to former 18th District Representative Gene DiGirolamo, who left the seat after being elected as a county commissioner.

Toby Kahn, who noted she is a registered Democrat, concurred.

Brandie Page, a 34-year-old first grade teacher who has been holding classes remotely for the last week, said she too felt she could still do her civic duty safely.

“Some candidates,” she said, “just wall themselves off and take care of their own.”

Results from the election are expected later Tuesday night.