A guest reads information on the 2020 census during a town hall at the University of Pennsylvania on Saturday, Sept. 7, 2019.

For the first time, the U.S. Census Bureau is asking most people to fill out the survey online.

(Harrisburg) — With $4 million in state funding, Pennsylvania is buying ads and preparing to award grants to nonprofit organizations, grassroots groups, and colleges to ensure every resident is counted in the 2020 census.

“We are making sure that we are counting everyone from rural, suburban, and urban areas in Pennsylvania,” said Norman Bristol Colón, executive director of Gov. Tom Wolf’s Complete Count Commission. “We also recognize that our state is more diverse than ever before, so we have to concentrate our efforts on the hard-to-count populations.”

The census takes place every 10 years to count each person in the country. The information is used to determine each state’s share of billions of dollars in federal funding and number of U.S. House seats.

For the first time, the U.S. Census Bureau is asking most people to fill out the survey online. Every household will be invited to participate by April 1.

The commission — a coalition of advocacy, education, housing, and religious organizations created by Wolf in September 2018 — originally requested $13 million from the legislature for outreach efforts, a dollar for each Pennsylvanian. But lawmakers were hesitant to make an investment of that size, Bristol Colón said.

“Finally, they recognized the important work that needs to be done, especially when it comes to the $27 billion in federal funds we get through the census [each year],” he said. “They came back to the table and they provided us the opportunity to have the $4 million to do the complete count.” 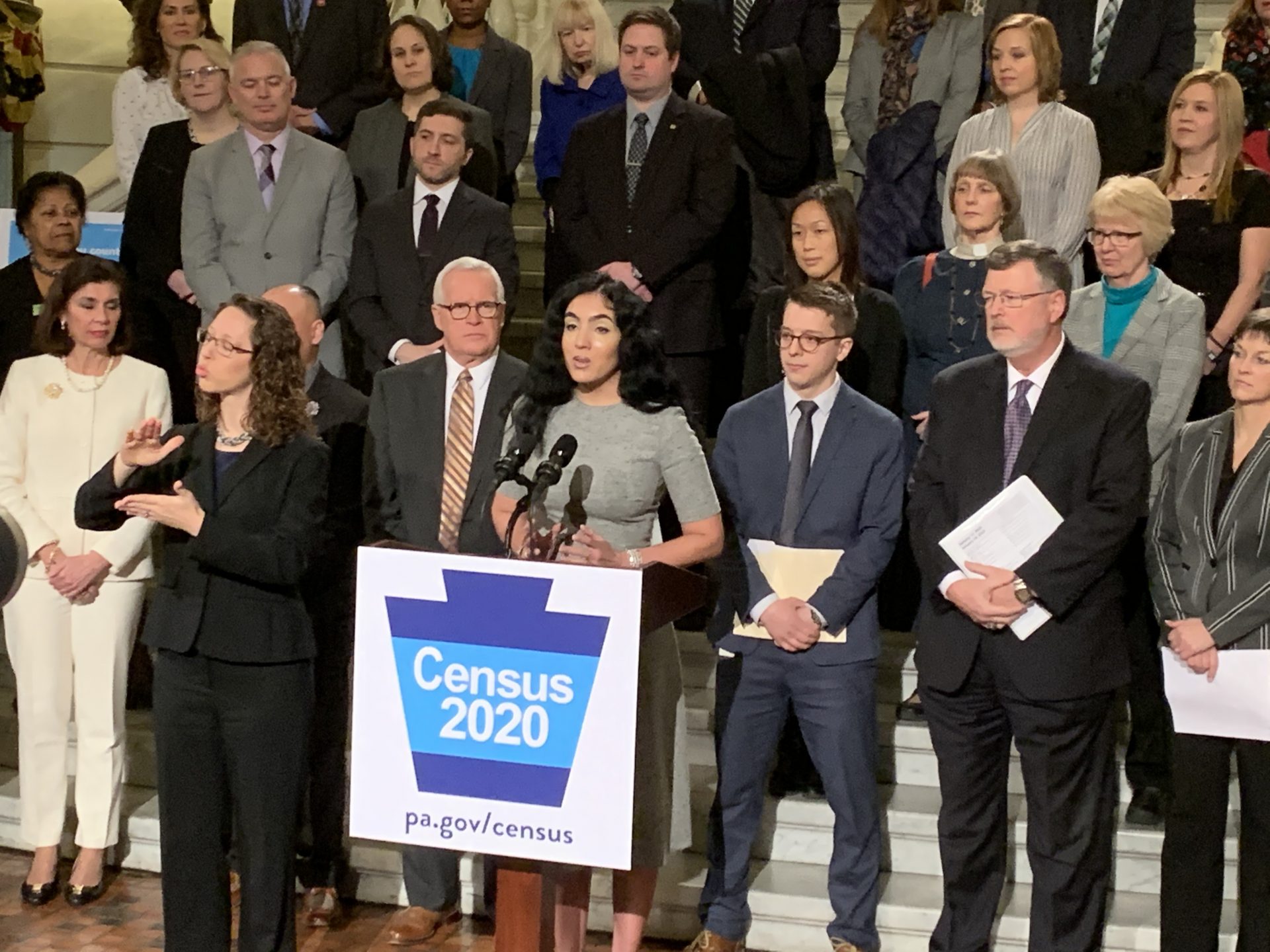 Pennsylvania’s second lady Gisele Fetterman (at podium) announces at a Capitol news conference her upcoming statewide tour to try to get hard-to-reach populations to participate in the 2020 U.S. census.

The funding was included in a voting reform package passed in 2019. Neighboring New York is putting $20 million in state funding toward the census, while New Jersey and Maryland have appropriated $9 million and $5 million, respectively.

The state has a $2.5 million contract with Red House Communications to produce and place census ads through radio and television stations, and in traditional print media, according to a Department of Community & Economic Development spokesperson. The state has also targeted Latinx and black news outlets, Bristol Colón said, as well as social media platforms.

The department is also reviewing applications for the $1 million Census 2020 Outreach Grant Program, which will award nonprofits, faith-based organizations, and higher education institutions with up to $50,000 in funding. The money will be used to target hard-to-reach groups through outreach efforts, including buying local media ads or sponsoring census-related events.

The application process closes Feb. 14. The other $500,000 in state census money “is allotted for miscellaneous expenses, including printed materials for communications purposes,” a department spokesperson said.

Hard-to-reach populations — a blanket term for groups like minorities, immigrants, low-income earners, renters, farmworkers, and rural residents — are a priority for the state’s Complete Count Commission. Some immigrants can be hard to reach because of language barriers, mistrust in the U.S. government, and fear of repercussions, according to commission member and immigrants-rights group CASA.

Pennsylvania is home to a growing Latinx population, including Puerto Ricans who sought refuge in the state after Hurricane Maria in 2017. More than 10,000 people arrived in Pennsylvania after the devastating storm, according to CASA. 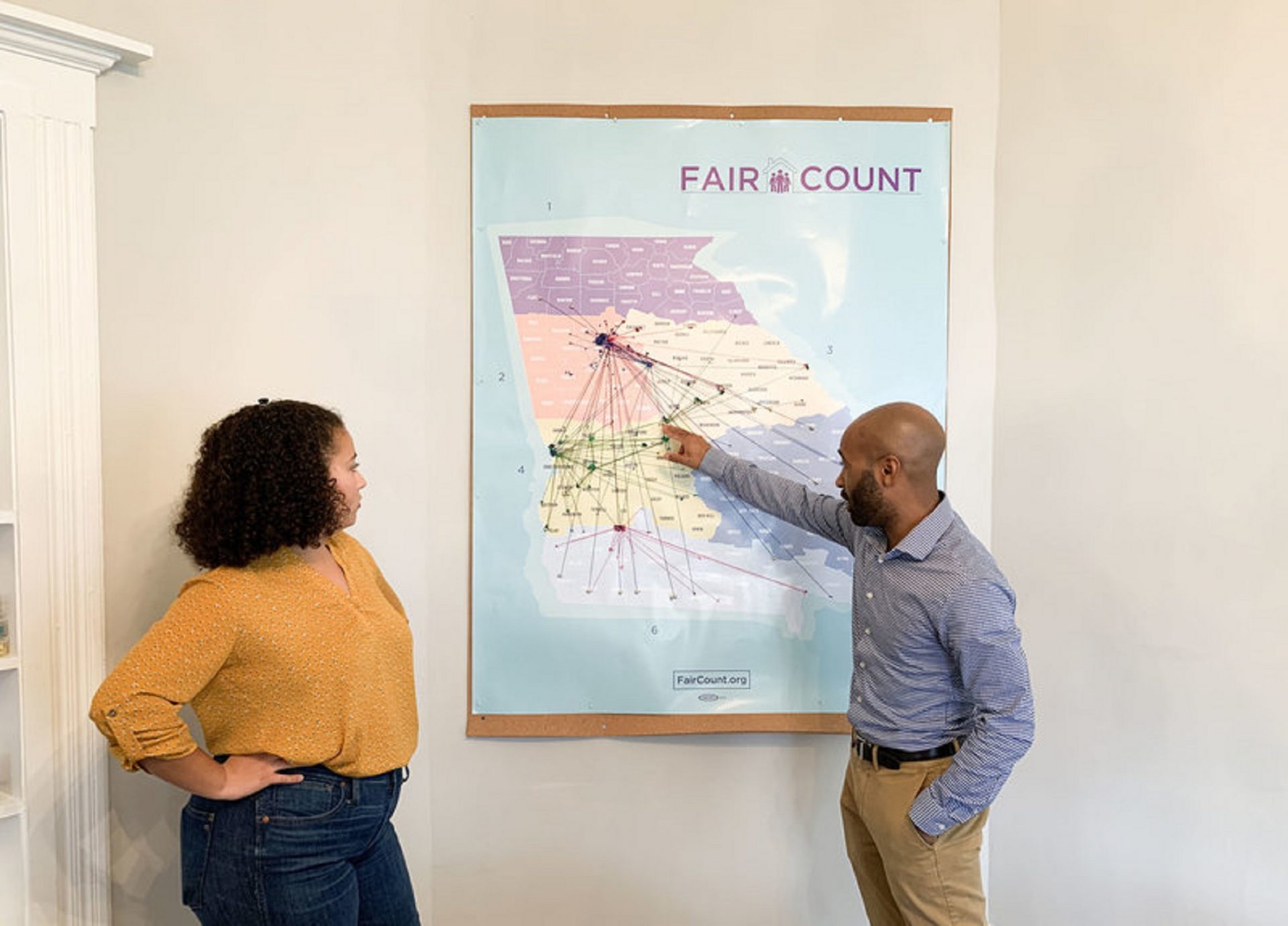 Ed Reed (right), Fair Count’s program manager, and Djemanesh Aneteneh, an operations and events administrator, look over a map showing the Wi-Fi hotspots the group has installed around Georgia.

President Donald Trump had sought to add a question about citizenship to the census, leading to concerns about an undercount of immigrant households, but ultimately did not prevail. Second Lady Gisele Fetterman, who was born in Brazil, is touring select counties to promote participation.

Although the survey is being offered online, Complete Count Committees — locally focused groups formed by municipalities or community leaders — are still depending on census workers to canvas areas. But finding workers to count these critical populations has been difficult.

February data from the Census Bureau shows successful recruitment efforts in Pennsylvania’s largest counties, including Allegheny and Philadelphia. But several rural counties in the state are under 40 percent of the hiring goal.

“It has been a great challenge for the Census Bureau to fill all the temporary jobs for census 2020 due to a low unemployment rate and the digital component to the application process,” Bristol Colón said.