Former New York Mayor Rudy Giuliani speaks at a rally supporting a regime change in Iran outside United Nations headquarters on the first day of the general debate at the U.N. General Assembly, Tuesday, Sept. 24, 2019, in New York.

Having federal prosecutors probe a similar matter raises concerns among some that federal law enforcement will be used to advance the president’s political interests.

Giuliani gathered the information from Ukrainian sources, and claims that it involves the family of former Democratic vice president Joe Biden, according to The Washington Post. The newspaper reported Monday that the Justice Department will route the material to the U.S. Attorney’s Office for the western district of Pennsylvania.

The news came less than a week after Trump was acquitted of charges stemming from allegations that he attempted to pressure Ukraine into investigating Biden, who is seeking the Democratic nomination to challenge Trump in this year’s presidential election. 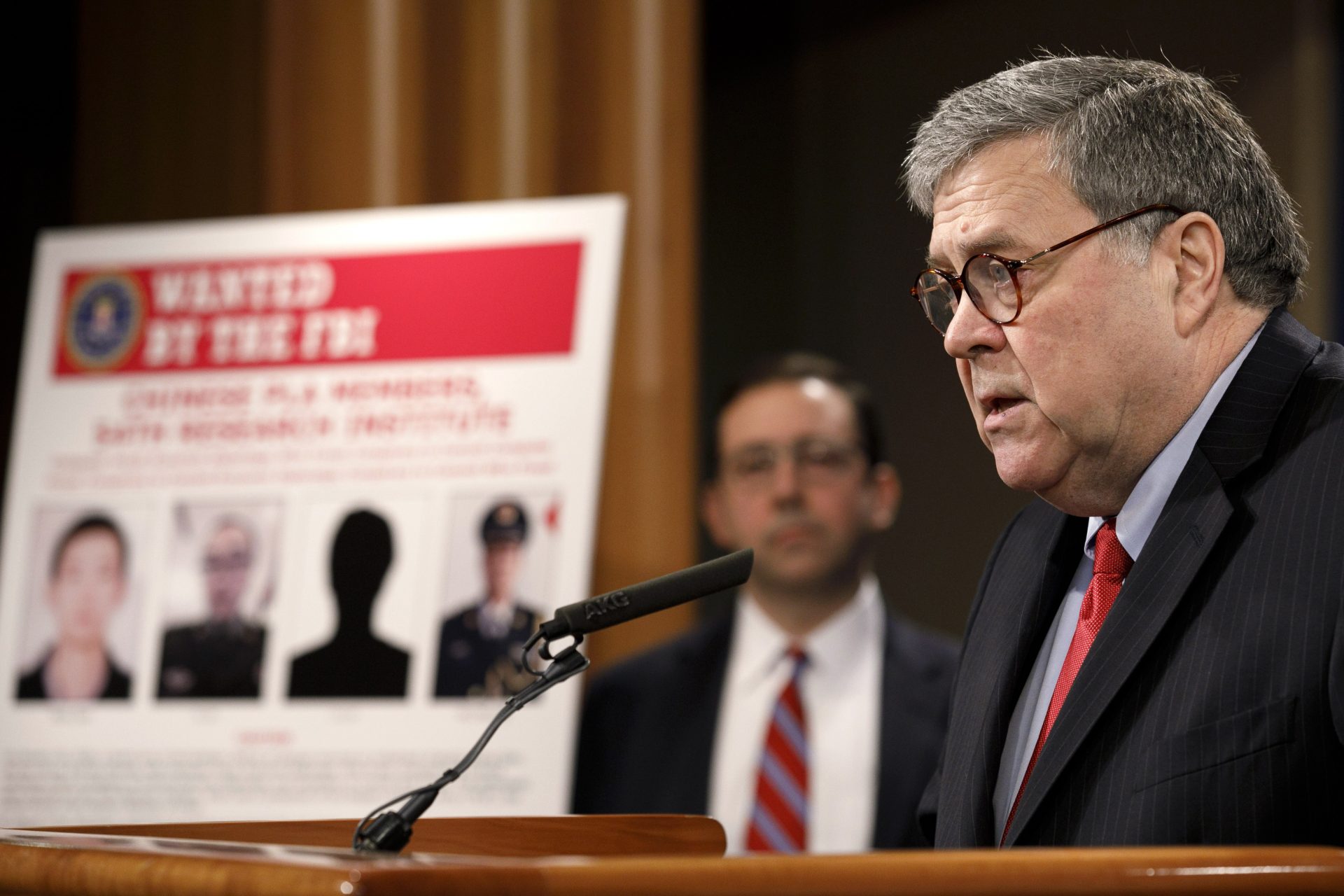 Attorney General William Barr speaks during a news conference, Monday, Feb. 10, 2020, at the Justice Department in Washington, as Principal Associate Deputy Attorney General Seth Ducharm looks on. Four members of the Chinese military have been charged with breaking into the networks of the Equifax credit reporting agency and stealing the personal information of tens of millions of Americans, the Justice Department said Monday, blaming Beijing for one of the largest hacks in history.

Having federal prosecutors probe a similar matter raises concerns among some that federal law enforcement will be used to advance the president’s political interests.

Going to a prosecutor’s office outside Washington could be aimed at creating at least a “superficial” appearance of independence, said St. Vincent College criminology professor Bruce Antkowiak. Antkowiak once served as an assistant U.S. attorney in Pittsburgh.

U.S. Attorney’s offices scattered across the country are part of the Department of Justice, Antkowiak noted. But keeping the inquiry at the department’s main office in Washington could more easily fuel “criticisms that, ‘Well, it’s being handled in-house. It’s probably going to be politicized.’”

Antkowiak noted that in an unusual trend, the Justice Department in the Trump adminstration has also enlisted U.S. Attorneys in Utah and Connecticut to review politically-charged matters.

Antkowiak said western Pennsylvania U.S. Attorney Scott Brady has run his office “in a very professional way since he took it over. … And I don’t think there has been any sense on anyone’s part that he has politicized his office.” 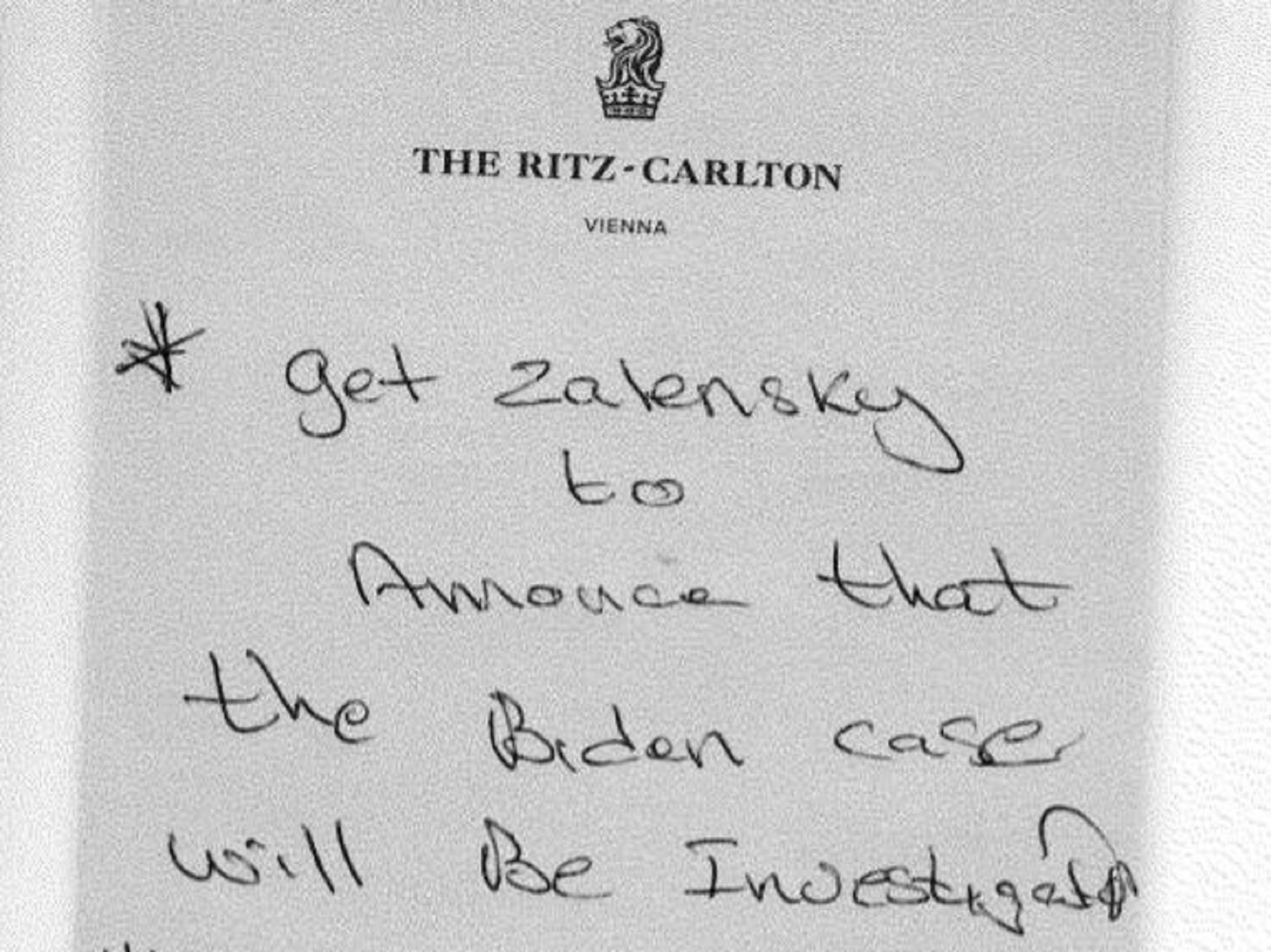 A handwritten note by Rudy Giuliani associate Lev Parnas lists his tasks, starting with getting Ukraine’s new president to announce an investigation into “the Biden case.”

Still, he said, “this, again, could be said of a number of U.S. attorneys across the country. … It is absolutely not clear why Pittsburgh would be chosen.”

The Pittsburgh office has declined to comment, but two U.S. law enforcement officials told CNN the office “has expertise on Russia and its cyber operations.” Over the years, the office has pursued a number of cases involving overseas hacking efforts.

Former U.S. Attorney Harry Litman noted, “Ukraine is a world into itself, and it’s very connected with Russia. So if there are a few people [in Pittsburgh] who know that world, that’s an advantage.” Litman was the U.S. Attorney in western Pennsylvania from 1998 to 2001.

Still, Litman said officials in Washington could have political motives for siting the review here.

“I don’t see anything about the Monongahela River that specifically calls out an advantage,” he said. But “to the extent you posit an unholy marriage between Trump’s … political fortunes and DOJ’s mission, that could well include sensitivity to particular important races come the fall. And Pennsylvania … surely counts there.”

In a Washington Post column Tuesday, Litman blasted U.S. Attorney General William Barr for overseeing a series of decisions that promote the political interests of Trump’s political allies. Litman wrote the column in reaction to the department’s decision to reduce the seven-to nine-year sentence career prosecutors had recommended for Roger Stone, Trump’s former campaign adviser. Stone was convicted of lying to Congress and of obstructing its investigation of the Trump 2016 campaign’s efforts to benefit from stolen Democratic documents.

Litman told WESA that “You can posit both benign and malign reasons” for moves made by the Justice Department. “There does seem to be a general pattern of … rewarding Trump’s friends and punishing his enemies, and having the attorney general be part and parcel of that kind of project.”

‘I let my guard down’ to connect with students, says Pa.’s 2019 Teacher of the Year