Army Lieutenant Colonel Alexander Vindman, a military officer at the National Security Council, center, arrives on Capitol Hill in Washington, Tuesday, Oct. 29, 2019, to appear before a House Committee on Foreign Affairs, Permanent Select Committee on Intelligence, and Committee on Oversight and Reform joint interview with the transcript to be part of the impeachment inquiry into President Donald Trump.

Update: Impeachment witness Lt. Col. Vindman may be heading to War College in Carlisle, but that’s not certain yet 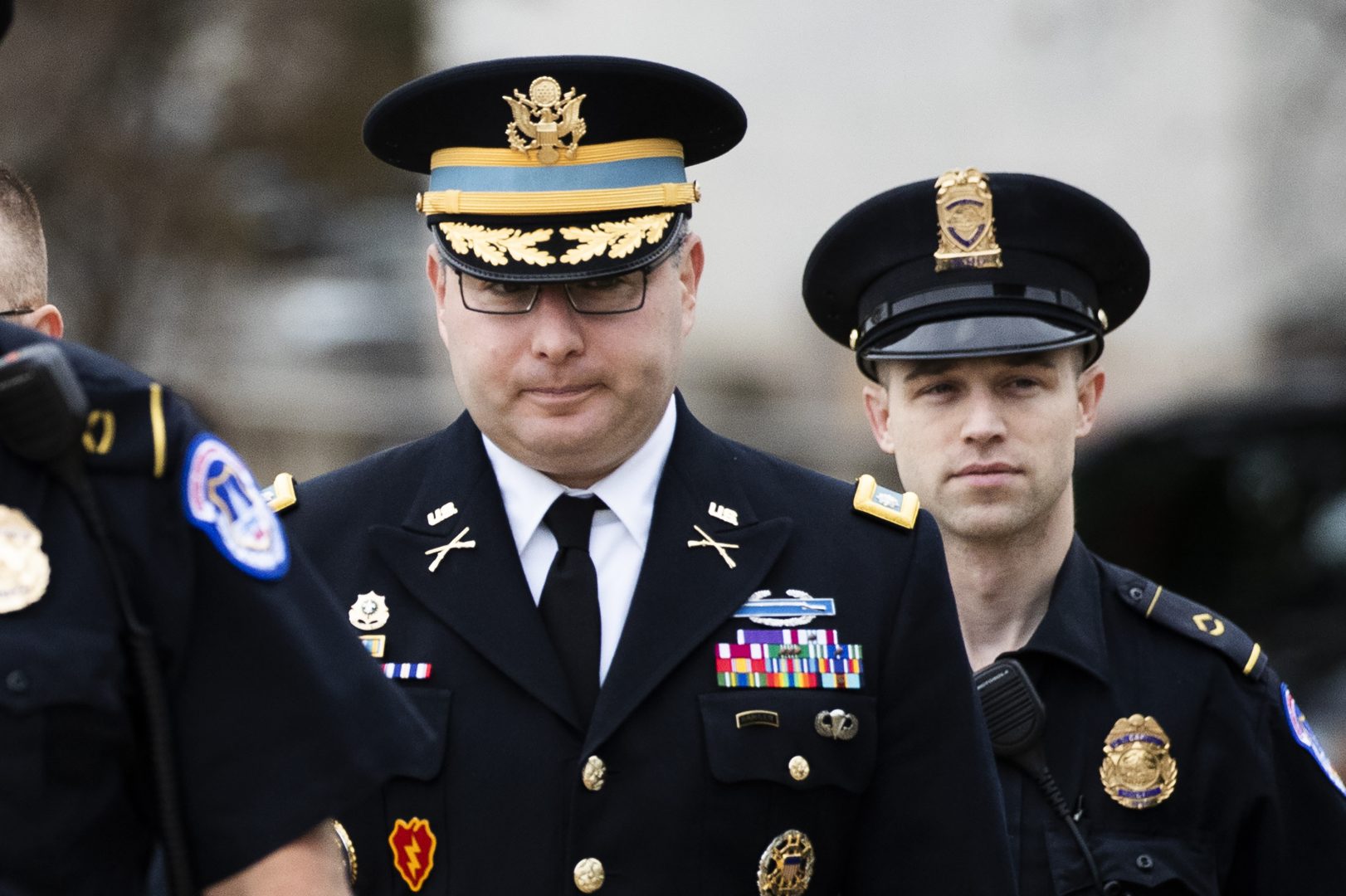 Army Lieutenant Colonel Alexander Vindman, a military officer at the National Security Council, center, arrives on Capitol Hill in Washington, Tuesday, Oct. 29, 2019, to appear before a House Committee on Foreign Affairs, Permanent Select Committee on Intelligence, and Committee on Oversight and Reform joint interview with the transcript to be part of the impeachment inquiry into President Donald Trump.

(Carlisle) — A spokesperson for the Army said Lt. Col. Alexander Vindman, the impeachment witness who was ousted from National Security Council post by President Donald Trump Friday may end up at the Army War College in Carlisle, but that’s not certain yet.

The spokesperson, who spoke on the condition of anonymity, said Vindman has been selected to attend a senior service college beginning this summer, but it hasn’t yet been determined which school he will attend. A statue of Frederick the Great stands on the grounds of the Carlisle Barracks, Thursday, April 21, 2005, in Carlisle, Pa. The statue was a gift to the United States in 1904 from Kaiser Wilhelm II of Prussia. The Carlisle Barracks is the site of the U.S. Army War College.

There are five possible locations, she said, including the Army War College in Carlisle and National War College in Washington, D.C. It’s also possible he will attend the senior college of another branch, such as the Navy or Air Force, she said.

Multiple news outlets reported over the weekend that the Vindman, a decorated combat veteran, would return to the Department of Army for reassignment, but was scheduled to report to the war college in July.

Vindman, who had told Congress in November he didn’t think it was proper for the president to urge the Ukrainian president to investigate Joe Biden’s son, Hunter Biden, was escorted from the White House on Friday.

Vindman’s twin brother, Lt. Col. Yevgeny Vindman, also was asked to leave his job as a White House lawyer on Friday, and Gordon Sondland, Trump’s ambassador to the European Union, was also released.

Trump on Saturday lashed out at Vindman in a pair of tweets, saying he didn’t know the Purple Heart recipient but that he was “insubordinate.” The president also said without evidence that Vindman had problems with judgment, the chain of command and leaking information. “In other words, ‘OUT.’” Jennifer Williams, an aide to Vice President Mike Pence, left, and National Security Council aide Lt. Col. Alexander Vindman, are sworn in to testify before the House Intelligence Committee on Capitol Hill in Washington, Tuesday, Nov. 19, 2019, during a public impeachment hearing of President Donald Trump’s efforts to tie U.S. aid for Ukraine to investigations of his political opponents.

“I’m not happy with him,” Trump told reporters Friday when asked about Vindman’s future. “You think I’m supposed to be happy with him? I’m not.”

“I don’t think he could be effective at the NSC,” Graham, said of Alexander Vindman, calling his removal a “reassignment.”

Graham suggested without evidence that Vindman may have improperly provided information to an administration whistleblower who first raised concerns about Trump.

“Hopefully somebody will ask questions of you about the role you play with the whistleblower,” Graham said of Vindman. The whistle-blower’s identity has remained largely hidden.

Vindman famously testified to the House that he had told his father, a Soviet-era emigre from Ukraine, “Do not worry. I will be fine for telling the truth.”

Democratic presidential candidates on Friday lauded Vindman during their debate in New Hampshire. Joe Biden exhorted the audience to “stand up and clap” in support of Vindman. Pete Buttigieg said Trump was “punishing a war hero” while Amy Klobuchar said being a witness “took courage.”

Other government officials who testified against Trump are bracing for reprisals after the president was acquitted by the Senate on Feb. 5.

Business Insider reported that his dismissal from the National Security Council came as a shock to many who served with him. One of his former commanders, retired US Army Brig. Gen. Peter Zwack, told the publication he wanted to “set the record straight.”

“I would trust Alex with my life,” Zwack told Business Insider. “It was literally important — we were in a difficult operational environment as attachés representing the United States to the Russians. We really had to be reliable, we had to be accurate, we had to be diplomats and Alex was good at all of it.”