Lottery winners at Philadelphia’s Work-to-Earn program clean up the streets of Kensington Ave.

(Philadelphia) — Early morning lines are not uncommon in Kensington. Some are for hot breakfast. Others snake around the corner of a treatment center.

This line is for work.

It was just after 7 a.m. and almost 40 people were lined up outside Rock Ministries on Kensington Avenue. Some chatted quietly, while others pulled the drawstrings on their hoodies tight around their face. Just 10 of them would be picked in that day’s lottery. The prize? Fifty dollars cash for half a day’s work cleaning up the streets around Kensington. 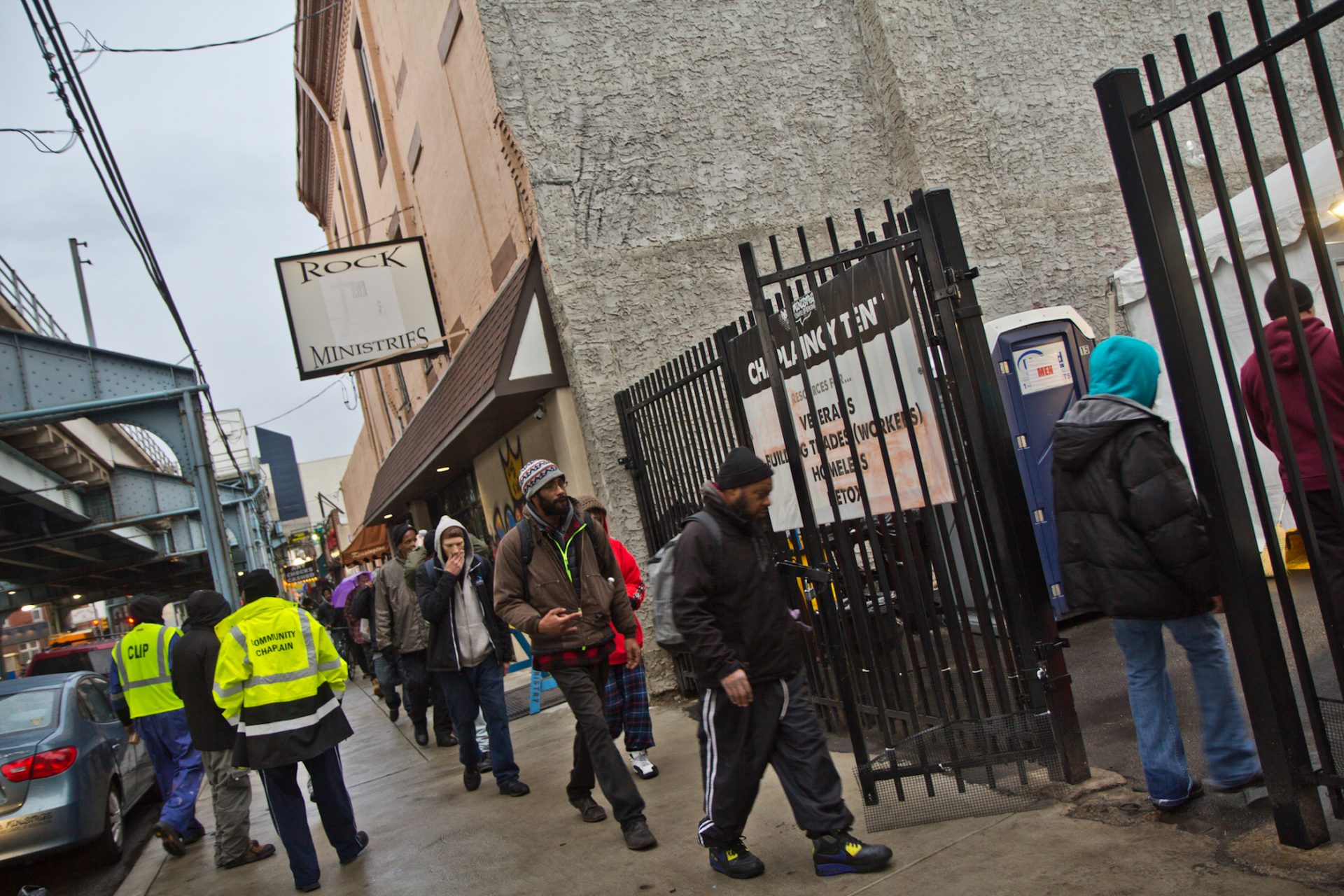 About 30 people wait in line for the chance for a day of work through the city of Philadelphia’s Work-to-Earn program.

Among those in the line was Joe, who declined to give his last name. Currently homeless and staying in Center City, Joe said he’d been picked to work the week before. He liked it, so this time he brought his buddy Rocco along. The two shared a cigarette beneath an awning, ducking out of the morning drizzle. Joe said he was trained as a carpenter but spends most days panhandling for money. Or stealing.

“Food to eat, or whatever. Things out of CVS, Walgreens, Wawa. It depends,” Joe said.

With a little cash in his pocket, he said, he wouldn’t steal. “I won’t do that at all. I don’t like doin’ that, it just sometimes has to happen.”

Three years ago, the city surveyed almost 130 panhandlers in Philadelphia. It learned that most people asking for money were keeping regular hours and treated it like a traditional job. They were making an average of $20 a day, and would work real jobs if they could get them.

But getting hired long term can be challenging for those without identification or who have criminal records. Still others may have substance use disorders, making it hard for them to stick to a regular eight-hour day. So the city came up with an alternative. 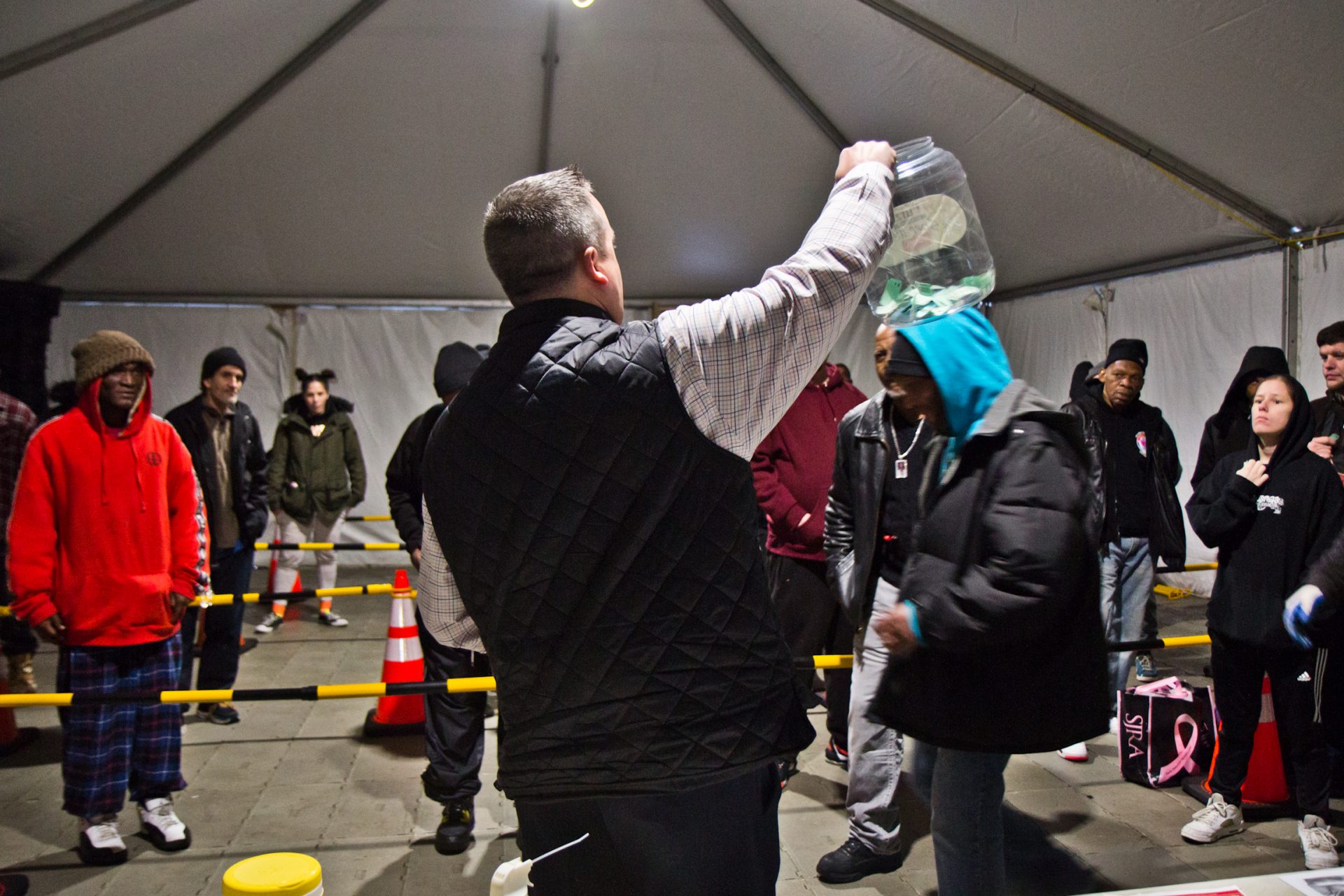 People are given the chance to be paid for a day of work through the Work-to-Earn lottery, which offers ten spots.

“It’s a harm-reduction approach: What do people need now?” said Eva Gladstein, Philadelphia’s managing director for health and human services. “If you have literally no cash, it’s very hard to get through the day.”

The city launched the same-day-pay program at Love Park in April 2019. Each morning, 20 people there are chosen to work on a mural in Suburban Station, run by Mural Arts, or cleanup projects through the city’s Community Life Improvement Program (CLIP).

Funding 20 jobs a day costs about $500,000 a year, including the cost of a program manager, certified peer specialists and the daily wages. Gladstein said that’s less than a typical job-training program.

During the program’s first six months, nearly all the participants were either living on the streets or housing insecure.

Those who are not chosen in the lottery on any given day are offered other services, such as identification cards, housing, and temporary employment through First Step Staffing, a nonprofit agency focusing on transitioning individuals out of homelessness. During the program’s first phase, 451 people were given work through same-day pay. Twenty-two went on to do some work with First Step Staffing.

CLIP workers explain rules to Work-to-Earn participants after they were chosen in the lottery.

Spreading out the work

Because the lottery at Love Park was a success, this year the city added a second site. It offers 10 positions each day, cleaning streets or vacant lots or removing graffiti around Kensington through CLIP, which schedules cleanup projects in response to calls that come in through the 311 line.

Leonard Riggins had been chosen at Love Park a handful of times, but he said he wanted to give Kensington a try because the odds of getting picked there were a little better — more than 100 people typically vie for 20 spots at Love Park each day. Recently out of a homeless shelter, Riggins is staying at his brother’s place in North Philly. He’d been trying to stay off the corner ever since last summer.

“I threw all that out,” said Riggins, 33. “My girlfriend was killed the day before Father’s Day, so you know, I left the streets alone. Just looking to do positive now.” 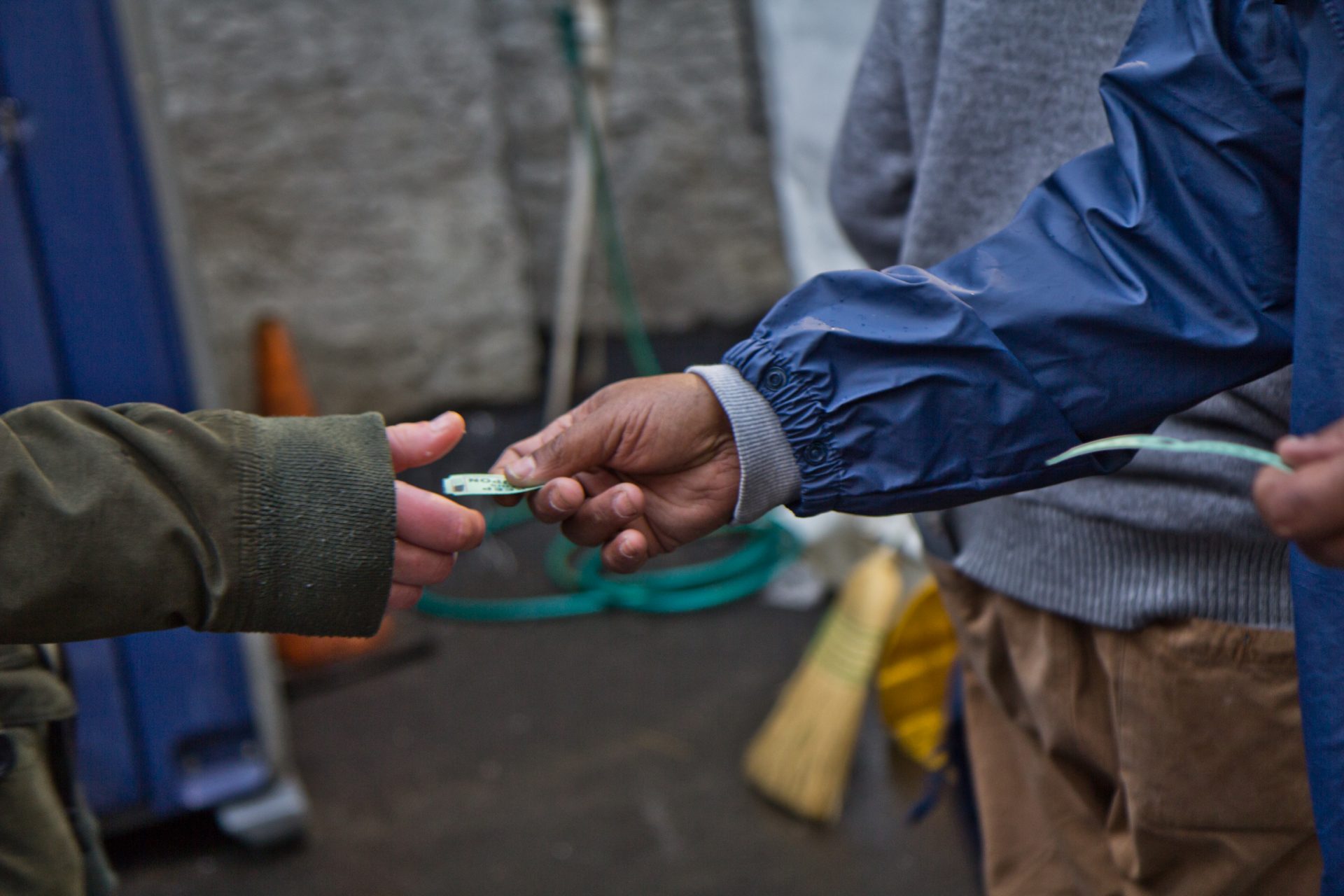 People hoping to be hired for a day of work receive a ticket to participate in a lottery that will give them a day of work.

Around 7:45 a.m., everyone was ushered into a big tent, where they were greeted by a CLIP official who drew the lottery tickets from a clear plastic jug.

As the numbers were called, the lucky winners responded with varying degrees of enthusiasm. Some whooped and and pumped their fists in the air. Others stepped forward with no celebration.

Joe’s number was called, and he stepped over the line to the area for selected workers, as instructed. Rocco wasn’t picked, so the two made arrangements to meet up when Joe finished working.

“Where you gonna be after the clinic?” Joe asked Rocco.

“I’ll be back at Eighth Street,” Rocco answered. He turned to leave the tent, but after a beat he spun back around. “Hey, can I get that dollar from you?”

Joe reached in his wallet, handed his friend the only cash there, and said goodbye for the day.

None of the 30 who weren’t picked hung around to be connected to services. Riggins’ number wasn’t chosen, and he hustled out to the El. It was just after 8 a.m., and if he hurried he could still make it to Love Park in time for the 8:15 drawing there. 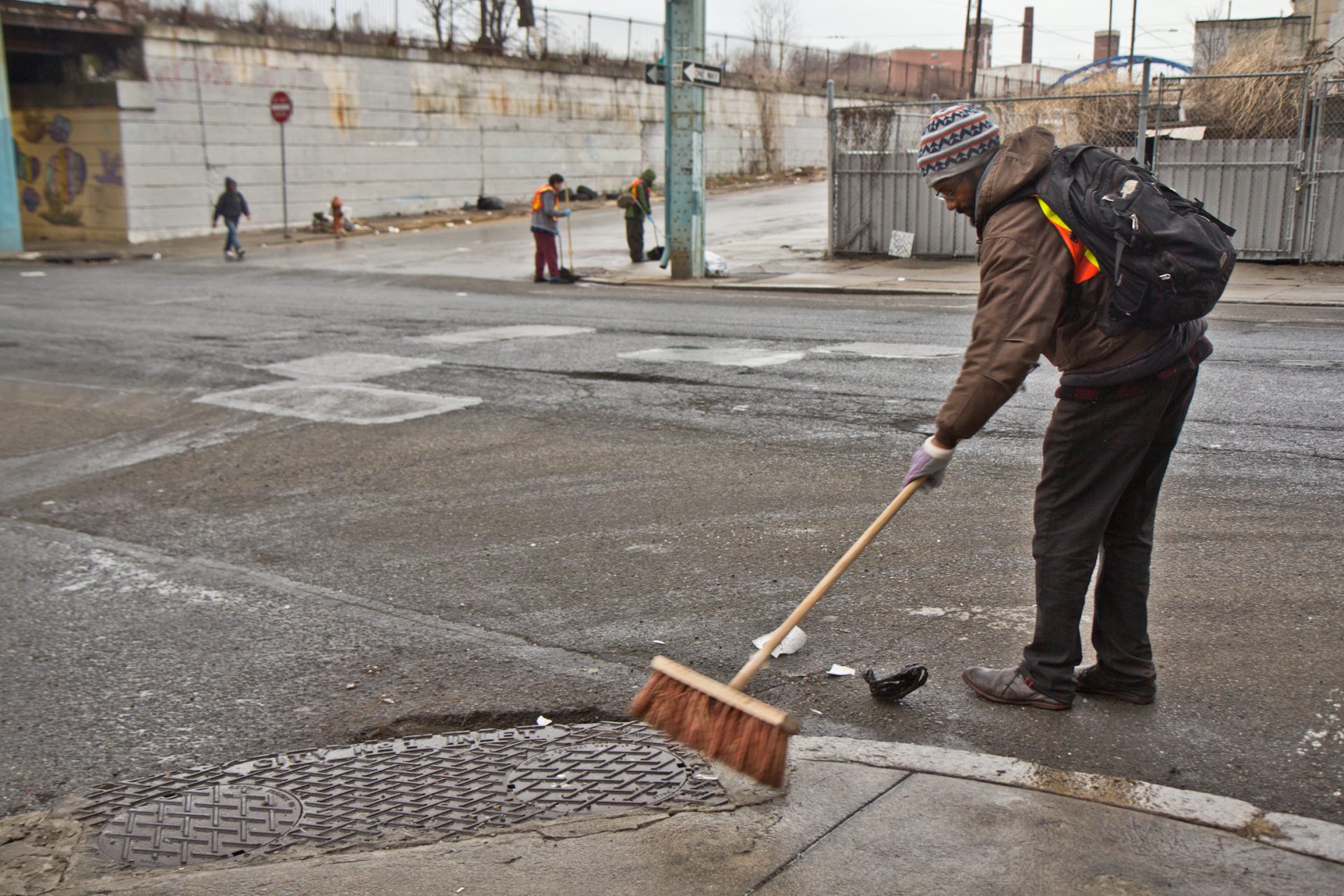 Brandon Johnson sweeps Kensington Ave. as part of the Work-to-Earn program in Philadelphia.

The 10 who were chosen were given instructions: Keep your vest on. Stay with your crew. If you see a needle, holler for the crew leader, he’s trained to pick them up.

You’ll be given a break, they were told, but when you come back you’re expected to look and act the same way you do now, implying there was to be no drug use on the job.

The workers were given push brooms and trash cans and split up along Kensington Avenue.

Myra Echavarria, 44, was one of two women selected. She said she used to clean full time. But she’s homeless right now, and said she has a long way to go before she’d be able to apply for a full-time job.

“I don’t got high school diploma,” said Echavarria, whose first language is Spanish. “I didn’t finish school. I gotta get myself together first and then start all over again.”

Echavarria said she planned to use the cash she earned to buy a pair of shoes. As she swept up trash on the curb of Kensington Avenue, avoiding needles and puddles, she did so in a pair of backless slippers.

Similar initiatives have been tried in Camden, and in Albuquerque, New Mexico, but Gladstein said they never made it up to scale. She doesn’t want to ramp up Philadelphia’s program too quickly, before they’ve worked all the kinks out.

But a year from now, Gladstein said, the goal is to offer 100 positions at four or five host sites.