State universities’ leader calls on lawmakers to ‘set this State System and more importantly, Pennsylvania up for success’

Chancellor Dan Greenstein says the system needs a 2% – or $9.5 million – increase in its yearly state appropriation. 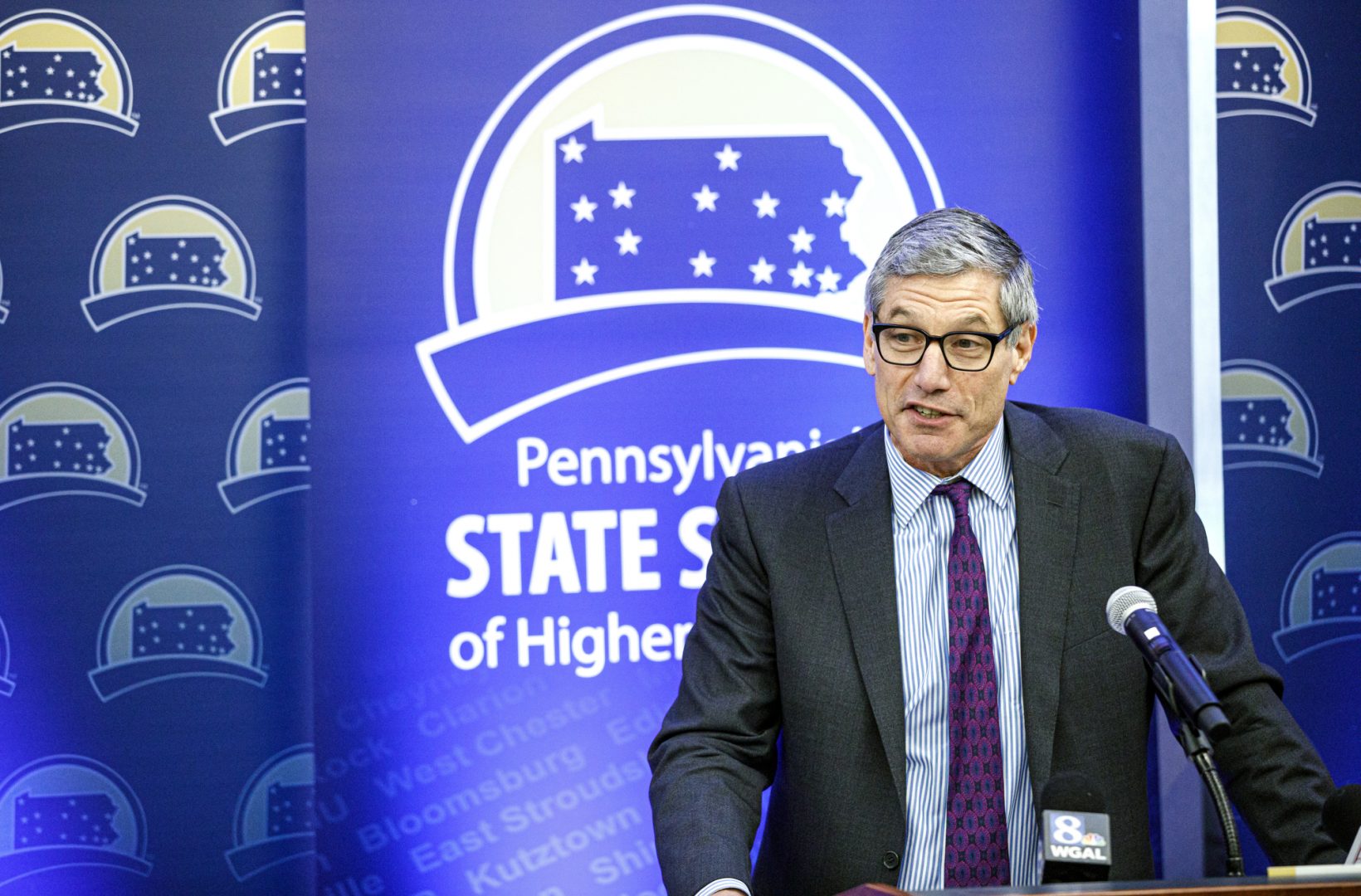 (Harrisburg) — Pennsylvania’s 14 state universities are “at a turning point” and the leader of the State System of Higher Education says Gov. Tom Wolf and state lawmakers play a major role in determining the course of public higher education in the commonwealth.

In his annual State of the System address, system Chancellor Dan Greenstein laid out the work on the system’s transformation that has occurred in the 499 days he has held his position. But he said it has gone as far as it can without some extra state funding.

Specifically, he said the system needs a 2% – or $9.5 million – increase in its yearly state appropriation for 2020-21 for a total of $487 million. He also said the system needs the initial $20 million installment of a five-year $100 million commitment to pay for the transformation to ensure it remains affordable, viable, and relevant to employers’ workforce needs.

″This can has been kicked down the road for many years,” Greenstein said. “Let me confirm. There is no more road. The State System bears a responsibility for this yes. But our elected state leaders share that responsibility, and so we ask our partners to collaborate with us to support our efforts and set this State System and more importantly, Pennsylvania up for success.”

Sen. Scott Martin, R-Lancaster County, who serves on the system’s board, said he believes there will be interest amongst his legislative colleagues to support the system’s redesign efforts. “What the dollar amount is I’m not going to venture to say. But what I hear a lot of, before we get to that is what are you doing to addressing the large cost drivers,” he said.

Martin said his colleagues want to see the system take steps to “rightsize” itself from a system that once enrolled nearly 120,000 students to one that now serves about 96,000, which alone he suggested could take care of many of the financial issues it faces.

But to faculty union President Ken Mash, the fact that Pennsylvania consistently ranks at the bottom when it comes funding public higher education, which drives up student cost and student debt, is something that the lawmakers can’t ignore. “They either have to embrace it or they have to start pairing with us to make college more affordable for the students of the commonwealth so that there’s a good future here in Pennsylvania.”

What Greenstein didn’t mention in his near 19-minute address was the governor’s written assurance to the Middle States Commission on Higher Education that he would help Cheyney eliminate the $40.3 million it borrowed from the 13 other system universities and the chancellor’s office. That pledge was critical to maintaining Cheyney’s accreditation.

Afterward, the chancellor indicated that omission was by choice.

“This is really about us,” he said. “These are things about us and what we can really do.”

In his address, Greenstein pointed out the system has responded to lawmakers’ calls for increased transparency and affordability, holding the line on costs. The system is also heeding lawmakers wishes by measuring its successes and is making progress in aligning costs with revenues.

“We felt like we understood the situation much more clearly than we had before,” Mash said. State System of Higher Education Chancellor Dan Greenstein delivers his state of the system address, January 15, 2020. Greenstein is the head of a system of 14 state-owned colleges and universities.

The system froze in-state undergraduate tuition for the first time in over a decade, keeping the base two-semester rate at $7,716.

“Going forward, the board has asked our universities to maintain average net price increases at or below the prevailing rate of inflation,” Greenstein said.

As for aligning costs with revenues as Martin indicated is of concern to lawmakers, the chancellor said the system has worked with its unions to develop multi-year labor agreements that “are fiscally responsible and fair.” It is leveraging its operating scale through a variety of shared services to achieve as much as $120 million in cost savings and cost avoidance over the next eight years or so. And it is working on reducing its labor costs that make up 85 percent of its costs in light of its declining revenues resulting from a shrinking enrollment through retirement incentives.

Board chairwoman Cynthia Shapira said looking back on what the system leaders accomplished this past year may make 2019 be remembered as the year that “took on the most importance since we were established almost four decades ago.”

Greenstein also addressed the frequently heard calls for closing down the financially struggling and under-enrolled universities such as Cheyney and Mansfield universities, among others, and what that would mean to the regions of the state where those schools are located.

Those universities struggle to attract health care professionals, educators and business leaders and depend “on our universities to grow their own,” he said.

Further, he said the economies of the regions where they are located would be devastated by the loss of these universities, which often are the largest employer in their region, and could prove costly to taxpayers. What’s more, he said with the system’s developing shared services, those universities will be able to partner with sister institutions and others to help them operate more efficiently. Students walk on the campus of Cheyney University.

“Because in a sharing system we have alternatives to massive socio-economic disruption and an obligation to the people of this commonwealth to pursue those alternatives until they are exhausted or prove to be ineffective.”he said.

But there alternatives to closing down financially challenged universities, Martin suggested afterward. They could be repurposed or made into satellite campuses of other system universities.

“I think these are all things that should be considered,” Martin said. “Everything should be on the table.”

Greenstein promised that 2020 will bring the opportunity for students to take courses and programs offered at another system university.

In addition, he pledged this year this system will launch budget plans to ensure all 14 universities are financially sustainable within five years, produce cost savings resulting from its transformation into a sharing system and report out student and university success in a way it never has before.

“We are implementing a strategy, we are on a path and because the challenges we are addressing are shared across U.S. higher education, the nation is watching us,” he said. “Our system redesign is bold, it is transformational.”

The support of foundations and donors and partnerships with employers, schools and community colleges are important to the system’s ongoing success, Greenstein said, adding, “but most critical of all is our partnership with the state.”